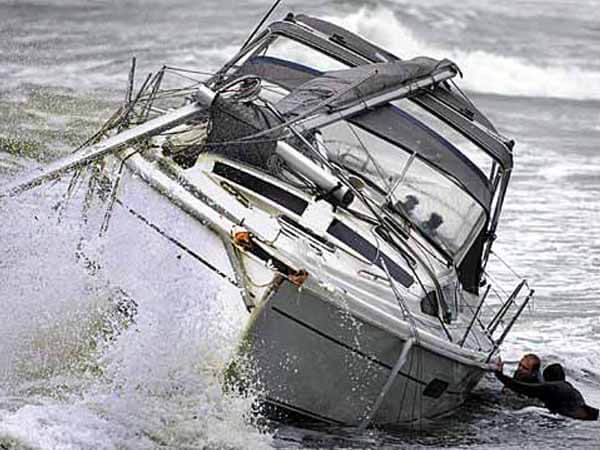 It is amazing how many owners will spend hours maintaining their boat and then neglect one of the most important things - its mooring.

It seems only yesterday, but four years ago Club Marine published an article about the importance of maintaining a swing mooring.

The sight of a yacht that had parted from its mooring during a storm and was washed ashore at Mornington in Melbourne, prompted us to have another look at how people were maintaining their moorings. The mooring itself was not the problem in this case, the bow fitting had let go - we will look at that later in this story.

The months of August and September traditionally herald strong southerly winds on most of Australia's waterways and it is the time of the year when boats on swing moorings are at their most vulnerable. Each year the southerly busters cause havoc in bays open to the south. Four years ago high winds hit Sydney and thousands of dollars worth of damage was done to boats moored in Manly Cove, La Perouse, Kogarah Bay, Port Hacking and Botany Bay. And who can forget that photograph of those six or seven boats washed up on the beach at Little Manly that appeared in the Sydney newspapers.

There is no guarantee that it won't happen again this year.

Four years ago we took a trip around Rushcutters Bay with marine assessor and salvage contractor, John Messenger. At the time there were many owners tempting fate with the state of their moorings. Many had badly chaffed ropes, in some cases inadequate for the size of the boat, others had rusty chains and shackles - a number almost worn through. Sadly nothing has changed. We still found many examples of badly worn moorings. In some cases it looked as if owners had moored their boats for the winter had left them hoping that they would still be there for the summer season.

Club Marine's files are full of sad tales of boats that have been damaged, some wrecked beyond repair when they have broken away from moorings and been smashed against other boats, or driven against jetties and rock retaining walls.

There is the case of a 40-foot yacht that was moored off Darling Point in Sydney Harbour. It broke free and drifted down the harbour to Watson's Bay where it became jammed under a jetty. A Randell 41 cruiser, worth in excess of $100,000 was attached to a mooring the owner had put down himself, using chain that was too small to take the weight of the boat. It broke free in a southerly and was smashed on the rocks. The owner was left with part of the bow and the keel section of the hull.

In another incident on Pittwater an Adams 31 broke free in a storm and hit six other boats as it careered through the moorings - causing more than $50,000 worth of damage.

Even if the mooring is well maintained there is still no guarantee that it will hold your boat if it is in an exposed position.

John Messenger says the things that cause a boat to break away from a mooring are chaffed rope, corroded chain links and shackles, and poor swivels. "Years ago no-one would have considered using rope to moor their boats, it was all chain," he said.

"In the days when bow fittings were manufactured from bronze or gun metal there was no problem with chaffing. Now everything is shiny stainless steel with sharp edges that cut through rope like a knife."

He pointed out that another problem occurred when people, in an effort to protect their deck, put a plastic sleeve over the rope. The sleeve holds the rope in one spot and over time it hardens, cracks and cuts through the rope. It is not easy to replace the sleeve when an eye has been spliced into the end of the rope, so it is left year after year until it chafes through.

In all cases the sleeve increases the diameter of the rope to where it is too big to sit in the bow roller and the retaining pin is left out. It was amazing just how many boats we saw without pins or the rope was too big to push the pin home. As the boat rises and falls in the swell it works out and can pull the pulpit out or chafe on the toe rail.

Mooring lines should not be left attached to an anchor winch. Some designs have a cast casing with a flimsy cleat on top. This according to Messenger, just invites people to tie off to it. He also laments the lack of fairleads on modern boats. If the boat does not have fairleads the mooring line should be fixed to a bridle that runs to two strong points on the boat.

Another don't is to splice a thimble into the eye of the mooring line and to fix a chain to it with an off-the-shelf galvanised shackle. After a time the thimble will elongate and cut the rope. A galvanised shackle can't be relied on as well. If using rope and chain, professionals splice the rope through the end link of the chain.

For most people a boat is a big investment and the small cost of a substantial mooring put down by a professional mooring service is money well spent. Beware the person who offers to dive on the mooring to check it. It is almost impossible to tell if it is showing wear, especially in poor visibility and the silt on the bottom of most popular mooring areas. To be checked properly the mooring needs to be pulled at least once a year.

A professionally-built mooring, such as the type Polaris Marine Constructions and Recovery in Sydney supply, consists of a large concrete block that sinks into the mud on the bottom, a length of stud link ground chain, a large swivel manufactured by Polaris with the ends of the bolts cut off and peened over to stop the nuts working loose, 24mm chain and 24mm rope spliced to the end. Different areas, especially in Sydney require different treatment. In some areas the chain will wear quicker than in others or there may be an electrolysis problem that will quickly reduce the life of a chain.

Polaris Marine's Adam Peeters showed us examples of chain that had corroded over just one to two years to where the links were half their original size and some off-the-shelf shackles that had let go when the pins had corroded through.

And don't fall into the trap of hooking up to an existing mooring that is not strong enough to take your boat. The mooring may have been safe for a 25 footer but if you come along with a 35 footer it may not take the extra weight. Never moor your boat on a strange mooring for any length of time without having it checked. A professional mooring will cost around $1000 to put down and a yearly inspection is about $90.

If the mooring is a private one it is your responsibility. If your boat is on a commercial marina mooring it is the operators responsibility to maintain it. It would pay to enquire of the operator when and if your mooring had been serviced within the last 12 months.

Now back to bow fittings. The reason the yacht was washed ashore at Mornington was because the bow fitting tore out of the boat - the mooring remained intact. Just because your boat comes with certain bow fittings don't take it for granted that the fittings are suitable to secure a boat on a swing mooring.

Most bow fittings are manufactured overseas to a price and many are totally unsuitable for securing a boat on a swing mooring as you can see in some of the examples depicted in this story. Many of these bow fittings have sharp edges or are too small to take a regular 24mm rope. We found one boat hanging off the end of a 24mm rope that was attached to a cleat set back from the bow that would be struggling to hold a 10mm line. Many boats are not equipped to be kept on a swing mooring. If you are unsure as to whether the fittings on your boat are adequate, seek professional advice from a mooring contractor or a marina operator.

And if your boat is moored in a berth on a marina don't become complacent and think it is entirely safe there either. In strong winds the continual motion can cause mooring lines to chafe and break. Boats in a berth should be secured at the bow and stern with springs fore and aft made up to suit the boat and used for that purpose only - don't expect an old sail sheet or a spare bit of rope to do the job. In a blow it is always a good idea to double-up the bow and stern lines.

The bottom line is don't use makeshift gear, such as railway wheels or engine blocks with small chain and old rope to secure your boat. Invest in a professional mooring and keep it well maintained, because if you don't, you could well find that your insurance policy does not cover the damage if your boat breaks free from a sub-standard mooring.