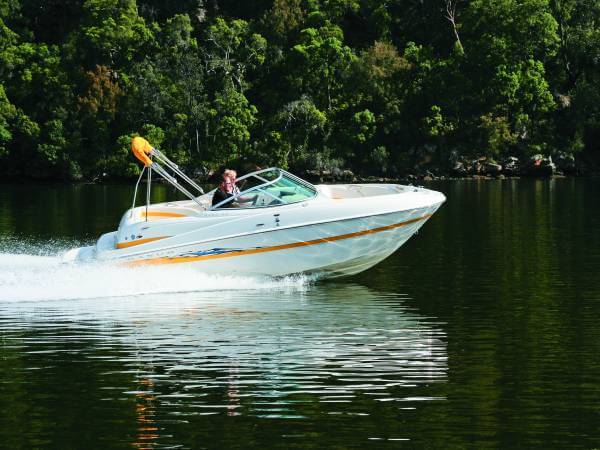 A pair of stylish American sports boats that offer fun and performance. We put Bayliner’s 205SE and the Maxum 2100SD through their paces.

“No one knows where Berowra Waters is,” says John from the Avante Group, Bayliner and Maxum importers. And he’s right; Sydneysiders believe they know where it is, but with 4 million people not far away, Berowra Waters on a weekday morning is empty and quiet. The pelicans are still perched on their poles; the ducks are stretching and thinking about heading off to work.

We are on board Bayliner’s 205SE (SE being for Special Edition). For $1000 more than the base price, the SE gives you black gelcoat, special graphics, black canvas, embroidered seat accents, and a sports steering wheel. It’s a very nice steering wheel and the boat looks good in black. It strikes me that black is an unusual colour on a runabout. Presumably, that’s why it’s a Special Edition.

The boat is a 20ft 4in, 1344kg sports/family boat. The base model has a 4.3-litre, 190hp MerCruiser Alpha, but the boat we tried had the 260hp 5-litre MPI. Other engines are available – this we will discuss later. There is also an XT model, with wakeboard tower and extended swim platform.

You board the Bayliner over the stern, stepping on the moulded, non-skid on top of the engine box after unclipping the upholstered cushion on the centreline; a cushion which forms part of the full-width sun lounge when it is assembled.

The back-to-back cockpit seats slide fore and aft to move driver and passenger closer to the dashboard, or when slid right out they make full-length lounge/beds.

There is storage under the stern seats on both sides. The ski locker is under the floor on the centreline, long enough, says Avante’s Ben Griffiths, to take a full-sized slalom ski (68 inches, he thinks; I have no idea). Wakeboards can stow in the carpeted, open compartments in the hull sides.

In the bow, there is storage under the seats and a locker in the bow to take the anchor. All drain into the bilge.

The glovebox has a waterproof AM/FM tuner and a point to plug in the MP3.

The dash is waterproof and nicely trimmed with a fabric, which is light-grey for anti-glare. Instruments are volts, oil pressure, speedo (mph and km/h), trim gauge, tacho, temperature and fuel. The SE steering wheel has a soft rim, which is nice to hold.

There is a navigation light on a pole, which stows in the hull sides.

So how’s she go? Open the throttle at rest and the bow rises, falls and we’re planing in a bit more than a second. I’m serious; the hull jumps onto the plane faster than it takes to type “jumps onto the plane”. The factory claims a top speed of 53.4mph, depending on the prop, but Ben reckons we saw 55 at less than maximum revs (cutout is 5300). An easy cruise is 39-40mph at 3800rpm. And the engine is quiet.

The powered rack and pinion steering has plenty of feel and is geared lower than an outright sports boat, which makes sense. Handling is free of vice. We had a smooth river so we were reduced to wake-jumping to test her handling. She seemed to ride well and landed with no rattles; just a gentle thud as she re-entered.

If 260hp is not enough, Bayliner offers the 5.7-litre, 300hp MPI, which would surely pull out of the water a pair of hippos skiing barefoot. But Ben reckons that if you’re really serious, you can have a 1.7-litre diesel, presumably turbo’ed, for maximum lowdown torque. That’s a side-by-side comparison I would pay money to see – 300hp petrol versus 1.7-litre diesel.

There are worse ways to spend an early morning than running down an empty waterway in a responsive runabout. I’m only a part-time petrolhead and I hate engine noise, but the 205 is very quiet and never tiring. The cockpit is civilised and comfortable for families. But the Bayliner 205SE has the performance to remind you how liberating it is to run a responsive boat on gentle slalom at 35mph on an empty waterway; particularly after battling city traffic for an hour to get here. On this morning, at least, we proved John’s earlier statement; we seemed to be the only people in Sydney who knew where to find Berowra Waters.

Just up the road, the other 4 million Sydneysiders were stuck in traffic, all heading the wrong way. Fools.

The brochure shots of the Maxum 2100SD tell the boat’s story better than mere words. They show a bikini babe curled up on the sun lounge in the stern, her towel and sunglasses on the removable cockpit table. Another shows her sorting out her ski gear on the full-length, full-width sunbed in the bow. These two pictures illustrate perfectly the nature of this Maxum; it is much more than a sportboat.

The 2100SD has a transom ski hook as standard, there is a fully-lined, drained storage bin for skis and the brochure also shows it wearing a wakeboard tower. But this is also a high-sided hull with a 20-degree deadrise (the angle of the hull’s vee bottom), so it should be able to handle rough water and keep the occupants dry while it’s doing it.

You can set up beds in the bow and stern. You can option clears from the factory; there are no less than three freshwater outlets (a flexible shower in the stern, in the bow and at a small sink ahead of the passenger seat) and, wonder of wonders, swing open a door in the main bulkhead moulding, ahead of the passenger seat, and there is a portable toilet (a pumpout is an option). This trailerable sportsboat (trailerable with a wide load permit) is a potential camper/weekender.

The list of standard features is lengthy, but worth reviewing. There are two removable cockpit tables; one for the bow cockpit and one for the stern. They stow in a massive locker ahead of the driving position. The carpets are removable, clipped to the floor by press studs so you can lift them for hosing.

In the bow is a self-draining locker, which acts as the icebox. Forward of this locker is a hatch, which lifts to reveal the fold-out boarding ladder in the bow. There is another, of course, on the extended swim platform aft. And there is much more.

First impressions indicate that this boat has a lot of class. You board from the extended swim platform aft and step through a door in the transom. Driver and passenger seats swivel right around and bolsters fold up from the seat bases if you want to sit high and look over the screen. The waterproof dashboard is very stylish; from left to right you get volts, oil pressure, speedo (mph and km/h) trim gauge, tacho, temperature and fuel. There are also depth sounder and hour meter. The gauges are chrome-rimmed and the faces are beautifully retro-styled. The steering wheel is soft and sporty and the system is power-assisted rack and pinion. There are storage lockers everywhere; too many to list. There are moulded-in drinks holders everywhere – again, too many to list.

The brochure lists the weight with the base engine at 1782kg; good for this level of equipment. The MerCruiser takes only a couple of seconds to push her out of the hole, then runs up to somewhere near 50mph; we didn’t try for absolute top.

More important figures are cruising speeds: 30mph is 3000rpm while 3500 revs buys 35mph, which is an easy cruise. The engine is quiet and/or the engine box is extremely well-insulated; conversation is easy at any speed. The powered rack and pinion steering is just fine.

This is a quick boat with the 260hp engine, but if you are planning a lot of skiing, the extra $2500 for the 300hp unit would probably be worth it.

The Maxum 2100SD is truly modern boat because the designers have given this 23ft open boat some of the features, some of the comforts and some of the luxuries of a much bigger craft. Designers these days are blurring the distinctions between boat categories and extending the roles. This sporty dayboat with rough water capability not only has luxury detailing, it becomes a camper/overnighter. You need to consider carefully the list of standard features when thinking about the price and comparing it with its competition.

The 2100 SD is easy to like because it is clever, it has class, and it can fill a lot of roles. Despite what your mother used to say, it proves you can have your cake and eat it.