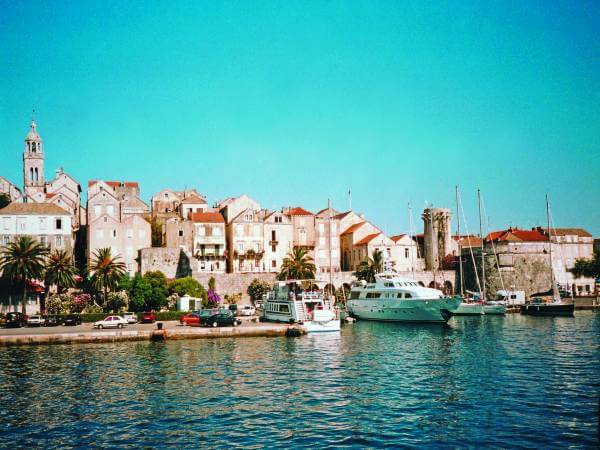 Before going too much further, I have to admit that, despite intense searching, I failed to find a single spotted dog. The black and white breed carrying the famous name is only to be found on inland farms, making the Dalmatian Coast a bit of a void for dog lovers.

The Adriatic coast, commencing at Umag in the north and meandering in a south-easterly direction to the medieval town of Dubrovnik, offers some 1780km of seemingly endless bays, inlets and harbours. Despite the overwhelming presence of private luxury superyachts – usually larger than a Manly ferry and complete with crew and tenders – it is easy to enjoy a Croatian cruising holiday without having to take out a second mortgage.

Our sea odyssey is confined to the southern end of the coast, from Split to Dubrovnik and back, via the beautiful coastal islands of Mljet, Korcula and Hvar. There are two ways to take this journey; either bareboat charter by sail or motor, or if you’re feeling a little lazy, book passage on an ‘old-timer’. Having bareboat chartered on other occasions, we opted for the latter, this being our first time in Croatian waters.

Our vessel is a graciously maintained wooden hulled boat of indeterminable age called Tuna. Our upper deck cabin comprises two bunks, wardrobe and ensuite. To describe it as compact is being kind. However, after cruising out of Split harbour on a sunny June day and taking in the spectacular beauty of the coastline, I realised there would be little time spent in our cabin. For once I was able to say that size was unimportant!

Before weighing anchor, we enjoyed three days of exploration in Split. The waterfront is dominated by Diocletian’s Palace, built around 300AD. Over the years, the palace has been modified until it has become an integral part of the town. Today, it stands as an impressive monument to the strength and influence of the sprawling Roman empire and its civil architecture. The palace is the setting for the annual Split Summer Festival, showcasing theatre and opera productions. During our stay, we were fortunate to attend a full house performance of Verdi’s Nabucco. By day, the numerous squares are taken over by cafés and restaurants, with the side streets full of quality boutiques and jewellery stores.

Situated on the waterfront corniche are the chandlery and produce stores, conveniently located for replenishing stock on the charters. The marina plays host to numerous craft, from modest 40-footers to breathtaking 200-foot ‘aqua cities’, complete with uniformed crew, numerous guests and, in one case, the family pooch, looking resplendent in a pink life vest and accompanied by – as we were later told by a rather uppity crew member – its own personal trainer.

Three hours after departing Split, we arrive at the harbour of Makarska for our first overnight stay. The change in coastline is rapid; from the built-up urban sprawl of Split to the small coastal villages and farming communities, where the crops and vines spread from near the top of the peaks down to the coastline in artful terraces.

With the sun still high, there was plenty of time to go to the beach. For those not familiar with typical European beaches, forget any ideas of a white sandy beach like in Australia. Imagine a shoreline of smooth, white stones, graduating from thumbnail size to serious toe breakers – that is why Croatians arrive at the beach wearing proper shoes, with the obligatory sea mattress under their arm. The water, though, is simply stunning; clear, clean and free of any nasties. You can swim to your heart’s content without being battered by crashing waves and dumpers, and you won’t emerge from the water carrying a sand bar in your togs.

After some sun and exercise, it was back to Tuna to change for the evening. Like many harbours around the world, you never have to walk far to find the perfect bar for a few drinks, while enjoying the sunset and making the only serious decision of the day – where to have dinner.

For lovers of seafood, Croatia is the perfect destination. Fresh fish, lobster, prawns and squid abound, while the Italian influence is common, with a number of restaurants offering pasta and pizzas. In every port of call, there is serious research to be done before the final decision. Local wines such as Posip and Grk (the vines for which are grown widely throughout the coastal region), are decent drops at modest prices. But for those with more elaborate palates, larger restaurants have the French and Italian regions well covered.

From Makarska, we cruised south, stopping en route at a small bay to swim, lunch and rest. Mid-afternoon and on to Dubrovnik, well deserving of the title of best preserved Venetian walled city in the Mediterranean. We dock at the marina located ten minutes from the old city. A local bus drops us outside the massive main arched gate, erected in the 13th century. The stone walls, topped by a parapet, are teeming with camera-toting tourists taking advantage of the picturesque view of the city and sea below. The main boulevard, known as the Stradun, is marble paved and leads to the bustling harbour, where tenders from anchored cruise liners disgorge their passengers. Restaurants tout for business and the local elderly folk sit in small groups, chatting or fishing in the warm afternoon sun. There is so much to see; churches, museums, amazing jewellery stores and, of course, the obligatory climb up to the parapet.

Dawn brings another clear day and it’s on to Mljet, a national park known for its thick green forests of Aleppo pines, encircling two salty lakes guarding the island of St Mary, home to a 12th century Benedictine monastery. While waiting to be ferried to the monastery, we swim in the cool, clear waters, later drying out in the sun on – you guessed it – more pebbles. However, I have to say, at least they don’t stick to the flesh and the imprints that cover your body are usually gone in a matter of hours.

Greek poet Homer wrote that Odysseus spent several years in Mljet. And little wonder, as it offers a myriad of activities. Visitors can choose from kayak or canoe exploration, scuba diving ancient wrecks, sailing tuition, bicycle rentals to explore the bays and forests using the wellcharted bike trails or, as Odysseus most probably did, indulge in quiet reflection at any one of the secluded spots on this enchanting island.

Next stop is Korcula, yet another 13th century fortified town and proclaimed home of the town’s famous son, Marco Polo. Korcula is dominated by the bell tower of St Marco’s, which takes pride of place in the town square and serves as an excellent meeting point after an afternoon of sightseeing. Restaurants surround the square and, as usual, the choice is hard, although the choice of venue for predinner drinks is too easy. The watchtower that overlooks the harbour affords a breathtaking view to the mainland and the town of Orebic. The climb up is rather daunting, but after a few ‘sun downers’ the climb down is far more of a challenge. Luckily, one of our group has decided to abstain from beverages for the night and is soon appointed designated guide; a smart move, as it turns out, for the challenging descent home.

Dawn on day six and it’s on to Hvar. By midmorning, we drop anchor off a small island en route and snorkel, swim and float in the pristine waters. The bombing competition, which has been hotly contested all week, is in its final stages. While we Aussies do our best, the gold medal goes to a German companion, who, with a hefty weight-for-age advantage, can manage a cannon blast of water that goes over the roof of the Tuna. A truly impressive winning effort.

Hvar harbour is dominated by the hilltop Venetian fortress constructed in 1551, which is well worth the effort to climb for the sweeping panoramic views. However, as we finally arrive at the top and take time to savor the moment, we are greeted by our German gold medallist and his similarly-sized wife. Impossible – that is, until we discover the taxi rank! While at the top, we visit the museum, which gives a fascinating insight into the town’s history and houses some outstanding maritime artefacts.

Down at harbourside on our last evening, we watch the fascinating collection of vessels moored for the night. How they fit everyone in is a real feat and the port authorities collecting the levies seem cheery and helpful. In every port, we found there were always extra hands on dock to help with the ropes and over dinner it is decided that we will return next year and do a bareboat charter.