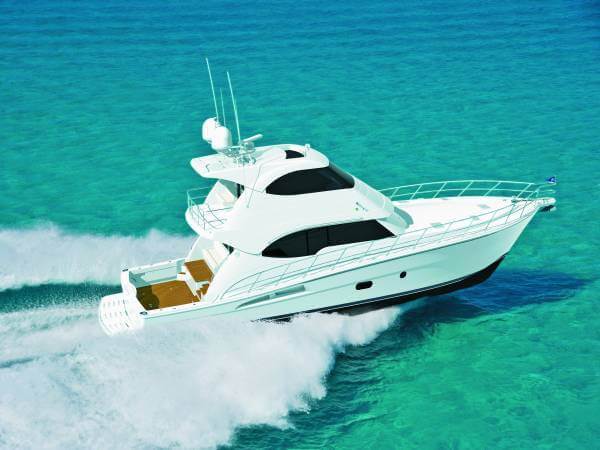 It’s almost impossible not to be impressed on a visit to Riviera. The sheer size of the company’s Coomera, Gold Coast manufacturing facilities and the scope of its range of luxury cruisers leaves visitors with an appreciation of just how far this iconic Australian manufacturer has come since it first opened its doors back in Terry Hills in Sydney a mere 27 years ago.

The multi-award-winning company is now considered amongst the world’s premier brands and exports its boats to nearly every corner of the globe. There are not too many other Australian manufacturers, including non-marine, that have such a high international profile as Riviera.

Recently, the company hosted a gathering of marine journalists to unveil some of its plans for the future and to discuss some of the issues confronting the industry as it competes on the international stage. In discussions with various employees and directors, their excitement and optimism was palpable. A range of spectacular new models, new staff in key design and production areas and the implementation of innovative new manufacturing techniques is clearly fuelling a resurgence and vitality within Australia’s largest boat builder.

Perhaps best illustrating the company’s focus and mission as it powers into its brave new future is its spectacular new 70 Enclosed Flybridge, which we were shown in mock-up stage. The 70 is a breath takingly ambitious new craft for an Australian manufacturer. It is bold, innovative and raises the stakes at the high end of the local production boat building industry.

To be launched at next year’s Sydney International Boat Show, the 70 Enclosed Flybridge boasts a four-cabin/four-bathroom layout, with sleeping capacity for up to 14 guests. A wide companion way midships leads down to the accommodation, including three cabins forward and an expansive master aft that takes full advantage of the 70’s 6.32-metre beam. The master is arguably this boat’s defining feature, its size and opulence bestowing a spectacular level of luxury and space on its fortunate occupants.

The forward accommodation includes a twin cabin to port, a twin or double to starboard and a forward cabin that can be fitted out with either a double bed or four tournament bunks.

We’ll take a more in-depth look at this boat in a coming issue, but other features include a massive cockpit designed with gamefishing in mind, a straight staircase leading from the large saloon to the flybridge and a stellar pricetag somewhere in the vicinity of $4.5m. The company expects to build up to five boats a year and has already accepted orders for its first production run.

We were also shown another prototype, which will see the light of day at this year’s Sydney show. A new addition to the company’s award-winning Sport Yacht range, the new 4400 Sport Yacht will take luxury boating to a new level, according to Riviera. It also embodies Riviera’s determination to adopt innovative and efficient new production technologies. For instance, the complete hull will be constructed utilising infusion-moulding technology rather than the traditional open moulded lay-up of fibreglass and resin. This process involves resin being introduced to the hull mould via an injection system and drawn through the core layers using vacuum suction, resulting in consistent hull thickness, reduced hull weight and greater strength due to tighter control measures. Until recently, this technology was limited to much smaller individual components, such as hatches and bulkheads. Riviera says this cutting-edge process will be expanded to other models in the future.

The innovation continues with Riviera’s decision to embrace ‘pod drives’ in the new Euro-styled craft, in this case Volvo’s proven IPS system. The 4400 will use twin Volvo IPS 500 diesel engines, rated at 370hp each. Twin Volvo IPS 600s, rated at 435hp, will be optional. The company says that, while it will use Volvo engines initially, it hasn’t ruled out using other pod drives, most notably, Mercury’s new Zeus units.

The joinery on the 4400 provides another example of Riviera’s intention to implement new production processes where it feels it offers specific advantages. In this case, the company has invested in a robotic varnishing machine which had assembled journos transfixed as it effortlessly and rapidly applied a multitude of lustrous coats of varnish with hardly a droplet going astray in the process. The 4400 Sport Yacht’s interior joinery – as well as various other models – will showcase this impressive new technology.

Look for a detailed review of this boat in a coming issue.

Company officials explained that the Riviera range will now be consolidated into four distinct lines – the existing Open and Closed Flybridges; Sport Yachts; Sport Cruisers and an all-new

Offshore Express line. The first of the Offshore Express line-up, the 48 Offshore Express, is due to make its world debut at this year’s Fort Lauderdale Boat Show in the US in October. A distinctively styled new concept of purpose-built sport-fishing craft, it utilises Riviera’s existing 47 Series II Flybridge Convertible hull that the company claims offers exceptional hydrodynamics, with running surfaces and chines optimised for a soft, dry ride.

The 48 Offshore Express will be offered in three distinct configurations: Open, with no coverings or targa above decks; a Targa version with a forward-raked targa arch and removable bimini; and a three-sided Hardtop with a rear curtain to enclose the helm deck. The bold, sweeping lines of the new craft give it a conspicuously sporty profile.

The cockpit will be “a game fisherman’s dream,” according to Riviera, with wide coamings, toe kicks, plenty of storage lockers and lots of livebait storage. The forward cockpit includes a moulded sink with removable cutting board. The transom door leads to a generously proportioned swim platform, with a hydraulic lifter as an option.

Accommodation will consist of two cabins and two bathrooms.

Other larger and smaller variants of the Offshore Express concept are expected to come on-line once the 48 has been launched.

Based on a day spent touring Riviera’s Coomera facility and speaking to its directors and designers, it would appear the company is embarking on a bold new era. Boat building at this level is all about excitement, passion and commitment – and the big Aussie would appear to have all in spades.