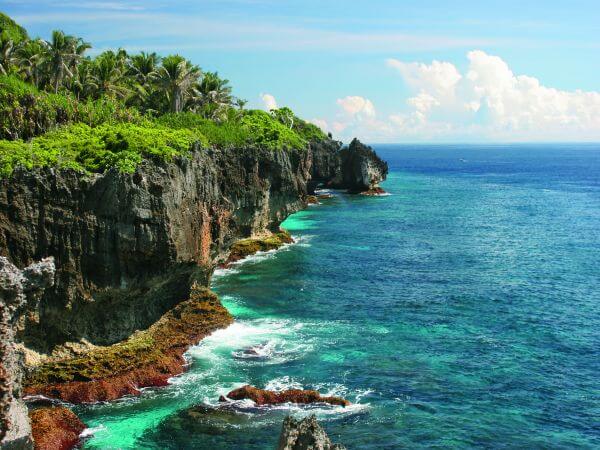 The rugged coastline of Christmas Island.
Armed with a hire car, an understanding partner and ill-suited foot-ware, Inger Van Dyke explores Australia’s “Kingdom of the Crabs”…

It’s important to read the fine print and have your facts straight before you pilot a hire car around Christmas Island. Signing a rental contract obliges you to follow local rules that are unique in the world. Where else on our planet are you educated about road closures due to crab activity? And road signs warn you of crab crossings. Tunnels are even built under roads allowing crabs a safe passage. Where else is a community built right in the pathway of, as Sir David Attenborough called it, “the greatest migration on earth?”

It is extremely bad karma to run over any of the island’s 120 million red crabs, unless it’s absolutely necessary. And under no circumstance should you try to drive over the monster-sized robber crabs. As I hurtled along the road into town from the airport, my partner carefully mentioned this. “You’ve got to watch the robber crabs. Don’t drive over them.”

“Are you kidding?” I responded. “No robber crab is a match for a pair of steel-belted radials.”

“No, seriously. They tend to rise up if they feel threatened. We could end up with a hitchhiker hanging off our chassis with a nasty attitude.” He was right. This was my welcome to Christmas Island (and I thought I was being brave risking the long flight and windy runway to get here).

Christmas Island is like a lost world. As one of Australia’s Indian Ocean Territories, a short 360km sail south of Jakarta or pleasant two-week cruise west of Darwin, the island suddenly appears out of nowhere. Craggy limestone cliffs jut out of an azure sea reaching towards a mop top of vine-ridden jungles. Wheeling in the skies overhead are thousands of frigatebirds and giant canary-like golden bosunbirds, whose long streamer-like tail feathers steer them to land.

On closer inspection, the island proves to be spectacular. Despite the presence of phosphate mines both old and new, there are pockets of beauty easily discovered by boat, car or on foot.

“Fancy going for a swim?” queried my partner. “Absolutely,” I responded, wiping sweat from my brow. While packing my sarong, towel, and swimmers into my beach bag, I conjured up images of a white sand beach, tropical heat and unbelievable snorkelling. Instead, I was led down through a rainforest toward a thundering sound. Waves were washing into ‘the Grotto,’ a limestone cave deeply rooted in the coastal rock cliffs. Fed by both salt and fresh water, the underwater visibility has a heat-mirage ripple to it. From above, the water is so clear it is almost invisible. This was my first swim on the island and I was hooked.

Just a short drive further on from the Grotto, the Christmas Island Golf Course sits lazily in the middle of a grove of coconut palms. Here, too, the rules change to suit the island’s crabby residents. If you’re up for a round of nine holes and a crab accidentally pushes your ball down one, then it’s counted as ‘in’, proving that a crabby caddie can help your golf game. But you may want to think twice about retrieving your ball if it’s lost in the surrounding forest. Robber crabs, capable of tearing a coconut apart with their bare claws, hide in ambush at the course’s edge. Apparently, they like golf balls. Perhaps the white colour attracts them. Possibly, they think it’s a mini coconut. I only knew that I wasn’t going to try and argue with one if it nabbed my ball.

Crabs are everywhere on Christmas Island. In fact, the entire island has more species of crabs than any other place of its size anywhere in the world. Predominantly, the land-dwelling red crabs make up the main population. They share the island with similarly-sized blue crabs and the largest population of robber crabs in the world.

Red crabs are endearing little critters. All over the island, they casually roam the forest floor grazing on leaf litter, leaving behind open expanses of mud. Walking around their territory, they scuttle off to seek shelter.

The one thousand or so people living on Christmas Island have grown accustomed to sharing life with their multi-legged mates and for 11 months of the year, it’s a harmonious relationship. Once a year, however, around the third-quarter moon in November, the balance shifts and, in a cloud of super-charged hormones, the normally terrestrial red crabs migrate to the island’s shores to breed. Occasionally, adult crabs will storm accidentally into houses in the stampede. Sometimes, school kids must jump over calf-high barricades to avoid sharing their classroom with their red friends.

As soon as the female crabs taste the salt water, they congregate and perform a disco-like dance with their claws in the air and their bottoms ajiggle, while each releases up to 100,000 eggs into the ocean. Eventually, when the young hatch, they converge on the island in the billions, like a swarming red tide. It is only then that they seem to be a problem and people living on the island are forced to remove them using dustpans.

Reputed to have no suitable place to anchor, Christmas Island is often left off the destination list of boaties embarking on an Indian Ocean odyssey. But on the lee side of the island, directly in front of the township suburb of Kampong Melayu, there are deep-water moorings and a marina building with public showers and toilets, all provided for the convenience of visiting yachts.

A broken coral beach leads to a stunning patch of onshore reef, complete with a multitude of hard coral and thousands of fish. Black triggerfish swarm together in schools underneath languishing long toms. Brightly-coloured clams reside happily beside powder-blue tangs, iridescent moray eels and over six species of butterflyfish. Electric blue trevallies also swim here in numbers. In October, when conditions are right, both fish and people sometimes get the opportunity to share the shallows with whale sharks – occasionally, they arrive to loaf around and look for food in the island’s temperate waters.

About 100 metres from the shore line, the underwater coral gardens suddenly plunge into depths of over 1000m. Along the edge are three deep-water anchorages suitable for almost any type of vessel. Yachties are welcomed by the locals, particularly at the Golden Bosun Tavern, the best watering hole on the island.

Travelling by boat to Christmas Island affords the rare opportunity of circum navigating the island by sea. It’s only by boat that you can fully appreciate the magnitude of the sharp and jagged cliffs that line the island’s perimeter. While it’s extremely unsafe to venture too close to the cliff faces, a boat allows exploration of some of the island’s coral reefs that would otherwise be impossible to reach.

Viewing the blowholes from the ocean is a good reason to attempt the trip. Wave-driven seawater shoots through keyholes in the volcanic rock at such force that the spray flies up to ten metres in the air. Unlucky crabs that chance upon this place during the migration have, on occasion, fallen into a blowhole at the wrong moment and found themselves catapulted into the air like a reverse bungy jump. Somehow, their delicate shells protect them from final impact, and after recovering from the shock of their free flight, they continue on their journeys.

Trying to negotiate the rocky surfaces of Christmas Island on foot requires stealth – and shoes that are significantly sturdier than sandals. I, for one, hadn’t anticipated rocks piercing holes in the soles of my expensive boat sandals (bought specially for the trip). In the end, I resorted to hiking boots to traverse the rocky surfaces intended neither for the faint-hearted nor stumble-footed.

If you are starting to think that Christmas Island isn’t your idea of a tropical island idyll, softer accessible surfaces are to be found around the island. Breaking through the cliff faces, sandy beaches like Dolly, Lily and Greta offer great swimming, snorkelling and even enough sand to provide nesting sites for sea turtles.

Still not soft enough underfoot? Ditching your shoes to walk barefoot around some of the island’s Buddhist temples is highly recommended. Cool tiles soothe while burning incense contributes to a heady, peaceful feeling you experience as you peer into the relaxed faces of religious effigies. On South Point, the Buddhist temple has a sublime view overlooking an expanse of ocean. The people living on Christmas Island follow a harmonious array of beliefs. Christians travel past the mosque in Kampong on their way to church and Bahá’í temples sit close to Buddhist monuments.

If you start to feel a bit ‘templed-out’ after a day of exploring the island’s religious shrines, then rest your weary feet on the wide stretches of lawn fronting some of the colonial mansions at the Settlement. Sprawling white washed houses adorn the coastline around the first established outpost on Christmas Island. In an architectural style rarely seen off the island, the houses fling open their large shutters to capture sea breezes.

Thoughtfully-planted frangipanis, hibiscus, bougainvillea and coconut palms dot the green lawns of the Settlement. Wandering around on foot, we yearned to trespass on to someone’s balcony with a gin sling to watch the extravagantly-coloured sunset evolve on the horizon. But, as we soon discovered, you don’t have to live here to enjoy this extremely pretty suburb. A wide strip of public lawn is just across the road from many of the houses and, gin sling yearnings aside, we chose this place to indulge in a sundowner-style picnic.

If you prefer your drink served by professionals, the Golden Bosun Tavern enjoys the same vantage point further into town. Early in the evening the bar is filled with locals and hardcore mining types, but friendly staff members welcome tourists as one of their own. Savouring a signature plate of lamb shanks with a glass of red, we toasted the kaleidoscope of red and lilac shades that coloured the sunset.

Thankfully, we didn’t have to drive home after dinner. Light headed from our sumptuous meal, the humidity and the sheer beauty of the island, I couldn’t have imagined negotiating a road full of robber crabs. We chose to stay at the comfortable and reasonably-priced VQ3 Lodge across the road from the Golden Bosun.

Prior to this trip, our impression of Christmas Island never went beyond crabs and refugees. During our stay, we felt as if we’d been dropped into the film set of Jurassic Park. In the end, we departed with souvenired-memories of heavenly landscapes, peculiar wildlife and the taste of island spring water on our lips.

• Pack light – luggage is limited to 15kg per person on National Jet flights.

• Hire a car. It’s the best way to access the greatest spots on the island, even with the crabs.

• Take your passport. If the plane cannot land on the island, a brief diversion to Jakarta is possible.

• The island has no GST and no tax on alcohol, making a holiday tipple very affordable. The local supermarket is also a bottle shop.

• Apart from crab rules, the rules of the road are the same as the Australian mainland, including drink driving and speed limits. The resident Federal Police are responsible for enforcement.

Christmas Island is a pleasant two-week sail west of Darwin. Our tip: plan a journey from Darwin to the spectacular islets of Ashmore Reef, cruise on to Christmas Island and end with a couple of weeks exploring the atolls of the Cocos (Keeling) Islands, about a week further west of Christmas Island.

Landings on Christmas Island must be reported to the Australian Federal Police, who control Customs and Quarantine on the island. Passports are required for identification. Account for not being able to land in the first 24 hours while inspections take place.

Landing formalities and other information is provided at: www.christmas.net.au.