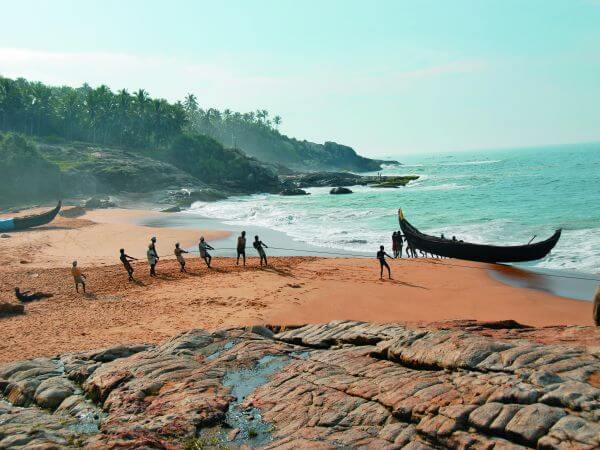 Bringing in the nets. Dawn on the beach at Pollethai.
In southern India, people continue to depend on the fruits of the sea as they have done for centuries past.

I have been lured to Kerala, this state on the extreme southern tip of the Indian subcontinent, by an image of Chinese fishing nets I saw many years ago. My imagination has gone wild with time, envisioning long lines of nets bordering the harbour at Fort Kochi. As I turn the corner at Vasco Da Gama Square, I am disappointed to find only ten. But they are aesthetically beautiful, dramatic and elegant and the unique technique used to catch fish has me utterly intrigued.

It is believed that Chinese traders introduced the nets, Cheena Vala, in the days of Kublai Khan. Around ten metres high and 20 metres across, the nets are fixed to the land and cantilevered out over the water on frames made from teak wood and bamboo poles. Large boulders, suspended from ropes at different lengths, are attached to the frame and act, quite ingeniously, as counterweights. As I watch, a fisherman walks along the main beam towards to sea. The balance is so fine that his weight causes the net to descend into the water. After the net has been submerged for around five minutes, a team of five fishermen on the deck pulls on the ropes. The boulders, one by one, come to rest on the wooden jetty as the nets are slowly raised. “Two hundred pulls a day,” one of them tells me. The amount of fish they catch seems nothing to sing about, but there’s not much time wasted before they are sold and carried across the street in a vendor’s wok.

Days later, and again I hear singing. I follow the sound through a tangle of palm trees and onto the cool sand of the beach at Pollethai. In front of me, a large, crescent-shaped wooden boat floats on the still, pale pink water like a cartoon smile. Lining the deck, facing the horizon, a group of men are pulling in a huge, wide net, its ends folding into the bow and stern of the boat. They pull methodically, in unison. As they pull, they are singing. Further down the beach, through the distant mist of dawn, the village fishermen are returning with their catch. With the help of several men, wooden yolks over their shoulders, the boats are swiftly pulled to shore. As the sun begins to throw long shadows through the fronds, the shore is covered with a melee of nets, men, dogs and birds. The unravelling of the nets and the sorting of the fish is well rehearsed. Nothing here has changed for generations. After all the activity, and amongst the wooden fishermen’s huts that shelter under the wide palms, the catch is splayed out on a concrete pad and auctioned. The bidding is brisk. Wads of worn notes change hands so fast I can’t determine a price.

The coastal regions of Kerala consist of a labyrinth of waterways, the estuaries of 44 rivers, lakes, canals and inlets from the Arabian Sea that run virtually the length of the state. For centuries, these backwaters have offered a source of livelihood for its people and fishing is an integral part of a languid lifestyle in which little has changed for eons.

Life in Mumbai is very different. Much is said and read about the magnificence of this city of over 16 million people. It is the financial centre of India and its wealthiest city, handling one third of the country’s foreign trade and generating around a third of its gross national product. The sun is struggling up through heavy broken cloud on the horizon as I arrive at Sassoon Dock, a long, wide concrete slab protruding out into the calm, navy waters where the city meets the Arabian Sea. A jumble of battered wooden fishing boats sways below with the tide. On their decks, littered with ropes, nets, floats and assorted plastic containers, wiry fishermen bundle the catch into envelopes of netting, which are hauled by ropes, or hurled with amazing accuracy, to the dock. Already, there is a frenzy of activity.

I am pushed and shoved along the narrow walkway on the perimeter of the saturated pier, far too close for comfort to its edge and the cloudy, oiled water below. There’s no time for politeness. Hundreds of workers sort thousands of fish; varieties I cannot recognise, as if there’s no tomorrow. With amazing speed, they are poured on ice and into Hessian sacks, woven baskets and wooded carts. Then they are gone. Rays of the rising sun catch and illuminate the iridescent, flowing saris – vibrant and beautiful – of Koli fisherwomen, as they rush backwards and forwards, like a human conveyor belt, ferrying fish in large woven baskets balanced on their heads.

The women have a powerful presence in this harsh business. Squatting in the midst of the organised chaos, a group of them noisily conduct auctions, surrounded by eager bidders – wholesalers, restaurateurs, casual buyers – all vying for the fresh catch in the bundles at their feet. Alongside the queue of waiting transport trucks, more women sell “Bombay duck”, a term of marketing genius for the mounds of spiky, colourless dried fish splayed out in front of them. The pungent smell is overwhelming. Amongst all of this, a young boy calmly sells ‘good luck’ garlands of luminous yellow marigolds. As I’m sure, many other youngsters have done for centuries before…