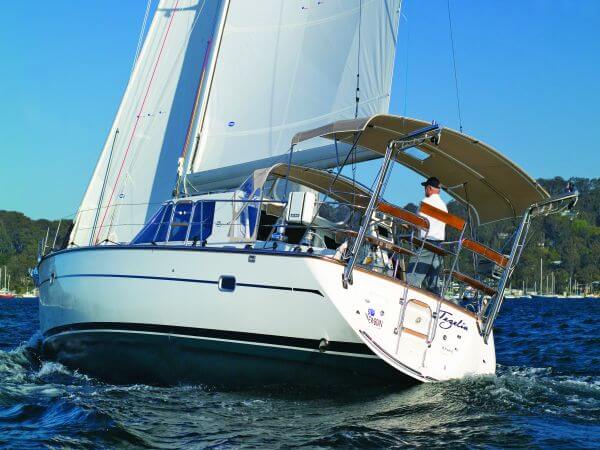 Buizen is a name synonymous with quality and integrity. The Sydney boat builder has reinforced its reputation with the Mk II version of its pilothouse 48.

Legend has it that an American yacht-building guru was admiring a custom-built 50-footer when he discovered it had taken all of 10 months to construct. “Dang,” he exclaimed with a southern twang, “it would only take me 10 days!”

Eddy Buizen, Australian yacht-building legend, is equally aghast that something as complex as a yacht could be assembled with such ungodly haste. A Henry Ford disciple, Eddy ain’t – his mission, long-shared by his brother Frits, is to preserve traditional crafts manship and produce world-class vessels that stand the test of time and tide.

Under the name Mastercraft Marine, Eddy and Co deliver only three Buizen 48s a year, each having a 10-month, 10,000-manhour gestation period. Skilled shipwrights are like proud fathers. Each boat is a thing of miraculous beauty. No corner is cut, no liberty taken … if a job’s worth doing, it’s invariably done well.

Since the 48-footer entered the fray some 14 years ago, only 30 or so have rolled out of the factory. Time has been kind to both Eddy, who, seemingly hasn’t aged, and the product. Frits is the hands-on production manager, while Eddy’s son, Tony and Tony’s childhood pal, Steve Howe are joint directors.

Of the 30 factory offspring, many were expected to be confined to nearby Pittwater as weekend escape pods, however Buizen owners have had other ideas – these nomads have departed for all points of the compass.

“At any given time, we’ve got yachts in the Med or on circumnavigations,” says Eddy.

“One client took delivery on a Saturday morning, then sailed into the sunset for eight years. He and his wife only returned to see their grandchild – otherwise they would still be out having the time of their lives.

“We knew the boat could do it, but the question was whether buyers would go to that extent.”

During the Millennium Odyssey world cruise, many of the entrants retired after enduring horrendous storms, yet a Buizen sailed through unscathed to win the event. In the Sydney Hobart, another Buizen finished second in its division. Streams of emails from globetrotting owners further attest to Buizen’s sea-keeping qualities.

“One of our yachts was just delivered to Western Australia against 50-knot headwinds in the Bight,” says Tony Buizen. “The two experienced yachties on board with the owner thought no boat could handle the pounding, but it did. They were blown away with the performance.

“The owners were powerboat people, who had never sailed anything more than a Hobie cat, but they sold their home to buy the boat. They have their life planned – in two years time, they’re taking off on an extended cruise.”

It’s not uncommon for buyers to cross over from power, lured by the inherent range and economy of the sailing vessel, yet equally impressed by the Buizen’s performance under motor and the familiar sportscruiser feel of its raised saloon.

Standard power is a 110hp Yanmar turbo diesel, but the maximum is 160, which achieves the 8- to 9-knot hull speed at fewer revs. A litre per mile is the rule of thumb for consumption, giving an impressive range from the 1180-litre tank.

That said, the term “motorsailer” undersells the Buizen’s capabilities. This is a bluewater-bred cruiser that just happens to sport a pilothouse. Naval architect, Paul Stanyon, has penned slippery sailing lines beneath the waterline, while recent modifications to the keel and rig have further enhanced performance under canvas.

A Mk II version was developed through evolution more than epiphany. Innovations such as the Leisurefurl boom (replacing in-mast furling) brought the sail-handling efficiencies so crucial to cruising couples. At the request of a racing-orientated skipper, a low-profile bulb keel carrying 5000 tonnes of lead on a fibreglass section replaced the former cast-iron stub keel – it has significantly improved stability and pointing ability, while reducing leeway and pitching.

Where once a four-cabin layout was standard, owners tend to favour a three-cab configuration with for’ard stateroom, and with the Mk II there’s a choice between an island vee berth or an offset double (designated a passage berth). In the latter case, the vee is used for a wardrobe.

Owners can semi-customise their craft. Friday afternoons are reserved for them to inspect progress at the factory, which has the air of a classic workshop, redolent with the aroma of timber. One owner asked for crystals to be mystically placed on the hull’s grid structure … the request was accommodated without so much as a blink.

Every bulkhead or frame is integrally strapped to the hull rather than glued. There’s no pre-fabricated grid structure or computer-cut panels; indeed very few templates exist … most components are hand-measured and hand-cut for a precision fit.

Cabinets may take days to construct, not hours. A curved teak platform for the cockpit represents about two weeks of labour for a dedicated woodworker. The saloon floor is hand-laid with 6mm solid teak and ash; not a thin veneer that’s prone to damage. To the untrained eye, it looks similar, but the Mastercraft team, and owners, know that maintenance will be reduced and longevity assured.

“The philosophy has always been to build boats to an outcome, not a price point or to maximise profits for shareholders. We can control the level of quality in the boat, and its capabilities, but we can’t control the environment it goes into,” says Steve Howe.

The Sydney owner of the latest launching was quick to recognise the Buizen’s qualities, but showed admirable restraint.

“In 1995, I was having lunch at the Cruising Yacht Club and my brother said ‘If you ever get back into sailing, buy a Buizen’. I decided there and then that the 48 was the boat for me, but waited until I knew I’d have time to use one,” he says.

As a builder, the owner appreciated the need for an unhurried production phase. “If you rush people, they make mistakes … and these people are craftsmen,” he says. “I now have a boat that can go anywhere in the world and be truly self-sufficient. All I have to do is buy the diesel (fuel) and catch the fish.”

TESTIMONIALS FROM THE BLUE

“As Free Spirit nears the northern tip of Australia, I am delighted to report she is a magnificent yacht. As I write this email, Robin is putting a loaf in the bread maker and weare sailing at 8knots ina15-knotaft-of-the-beam wind. The51-foot (name deleted) we have been cruising with is slipping behind …”

“What an adventure, and what a great way to really appreciate Elevation!! She is a sensational vessel; extremely well built, very comfortable and a treat to live aboard. For people who were powerboat owners, we have really discovered a passion for sail and to spend our next 20 years or so discovering the planet.”

– Jill Carter, Elevation (after sailing from Pittwater to Fremantle)

Our test of Tezelia coincided with its maiden voyage under sail and we were tenderly greeted by an 8-knot northerly. The crisp, white Hood mainsail rose sedately, its halyard leading aft to an electric secondary winch in the cockpit. The boom system negates the need for a bag/lazyjacks and the sail can be instantly reefed.

The keel-stepped mast is bulletproof, gaining support from twin backstays, twin aft-swept spreaders and Dyform rigging. It has an inner forestay that can be quickly detached and relocated aft to allow easy tacking of the overlapping genoa – a powered primary winch inherits the sheeting duties. Push-button sailing at its effortless best.

With 15 tonnes of hull having been motivated by Tezelia’s 160hp Yanmar, the sails warmed to their task and the responsive steering helped me find the groove. The hull carried its momentum through tacks and accelerated with reasonable athleticism.

Harking back to my previous test sail on a Buizen – 14 years ago – I fondly recalled powering into a 20-knot southerly and stout offshore swell at around 8 knots, gunwales down, spray cascading off the bow and sheets groaning under the strain. This time, however, the 48 surprised me with its light air adroitness.

There are several comfortable perches from which to view the headsail, while a clear panel in the bimini reveals the main and masthead unit – useful for those sailors who steer on instinct rather than electronics. On a passage, everything can be monitored from the comfort of the pilothouse. You sit in the commander chair, with a commanding view through the wrap-around windows, and an autopilot dial, Raymarine nav aids, radios and throttle close to hand.

Opposite the internal helm is the L-shaped dinette, its lounge upholstered in leather, while the galley is three steps below. The area forward of the mast is devoted to the master stateroom and ensuite.

The owner’s wife jokes that it takes all her willpower to drag herself out of the comfortable bed. For guests, meanwhile, there are twin double cabins aft.

The benefit of the raised saloon, other than the view, is the spacious engineroom beneath. There’s ample room for the diesel, plus an Onan 7kW genset, tanks and all the trimmings. Tezelia’s electrical demands are bolstered by solar panels on the coachroof, plus an invertor, and the owner opted for both a watermaker and icemaker to gain greater independence.

Its powerboat-like qualities continued back at the fuel wharf, where a bow thruster helped pivot the hull in its own length before nudging us gently towards the dock.

Base price of the Buizen 48 Mk II is just under $1.2 million, which includes genset, thruster, instrumentation (except GPS plotter), boom brake and power winches. The only major options are plasma screens, air-conditioning and icemakers.

All equipment is top-shelf. The Leisurefurl boom costs about $20,000 alone. The propeller, a four-blade Tri Stream folding unit built of stainless steel, is worth $6000. It was selected because lesser props have given vibration problems, while these have been trouble-free. Factor in the manhours and the price tag comes into perspective.

This is a yacht that will tackle anything the ocean can throw at it, maintain its resale value and instil unparalleled ownership pride. There is no better-built Australian yacht … indeed, I doubt there is any semi-production yacht in the world with more integrity.

Howe sums it up most succinctly: “Our satisfaction comes from cocooning people inside a piece of furniture. Quality, as they say, will never go out of style.”