In the wake of the explorers 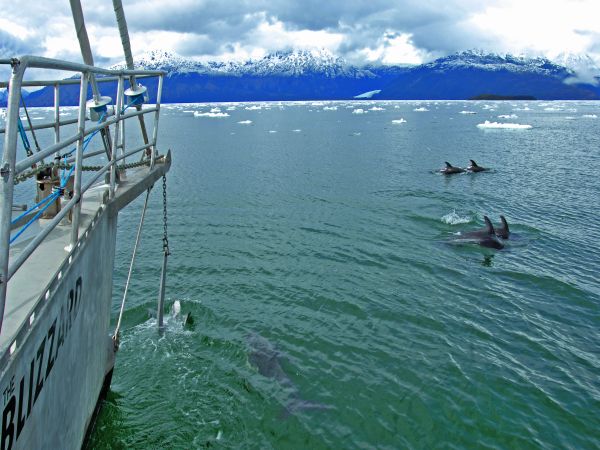 Cape Horn, at the very tip of South America, hasn’t made it as a popular charter destination. If sailors do land there, it’s probably among the flotsam of their wrecked yacht, or to patch up a piece of carbon damaged during one of the many round-the-world races.

So when I heard of a company operating charter tours exploring this rugged coastline, including meeting the Cape Horn lighthouse keeper and having a drink at the most southerly yacht club in the world, it seemed like a chance to recuperate from my day job as TV producer for the recent America’s Cup series.

Reaching the Chilean settlement of Puerto Montt and arriving onboard the Blizzard Expeditions boat at 11pm was perfect – time to open a bottle of red and yak about the trip ahead with skipper, David Pryce, mate Hannah McKeand and fellow passenger, Jamie Weeden. The diesel heater kicked out the warmth and I felt immediately at home on Blizzard, a custom Radford schooner built in Queensland in 1993.

Pryce, 36, from Tasmania, outlined three weeks of sailing 1000nm south to Puerto Williams, with a further week to explore the southern archipelagos and round Cape Horn, depending on the weather. Our route would meander through various islands, sea channels and fjords – a rocky maze of waterways.

In the morning, the light was fantastic. Having flown from a wintry Britain, everything looked brighter and sharper. Behind us, three snow-capped volcanoes sparkled above a luminous watery vista.

I met crew member number five, Tony Laurent, a forthright Aussie in his fifties, and we admired the 20m ice-breaking Blizzard from the dock. Her brushed aluminium hull and the stainless steel hardware gave her a resolute presence, as if saying: “I’m built for adventure, step aboard for some exploration.”

Our skipper was keen to set off and I filled up the answer machine at home while mobile reception lasted. There would be no further contact for the next 1000nm. We were headed for some really remote territory.

Our first anchorage was off Pumalin Park, an extraordinary project set up in 1991 by US millionaire Doug Tompkins, founder of the North Face clothing range, who bought huge tracts of virgin temperate rainforest here.

Tompkins did this in secret to stop deforestation by loggers and by 2001 he’d snapped up 320,000 hectares of land, making Parque Pumalin the world’s largest privately-owned conservation area. In the face of political pressure, he has since given the whole lot to the Chilean people.

Our second night was spent in a stunning anchorage called Puerto Juan Yates, named after a local pilot aboard the schooner Ancud, which sailed in the 1840s.

Turkey vultures cruised around the circle of islets, which were packed with evergreen beech trees, wildflowers and a few Magellanic penguins. Three dolphins, either Peale’s or Chilean, completed the picture as we settled in for some evening chat.

For me, one of the many pleasures of sailing is getting to meet and become acquainted with interesting people. Tony proved remarkable. He’d made two round-the-world record attempts, in 1993 and ’94, with quixotic Frenchman Olivier de Kersauson aboard the 90ft trimaran Lyonnaise des Eaux Dumez. They set a Jules Verne record of 77 days on the second attempt and as they rounded Cape Horn, Tony vowed to come back one day and stand on the forbidding landmark.

“It was reading accounts of early adventures that featured Cape Horn, like Kicking Canvas by Captain A A Bestic, that got me into sailing,” said Tony Laurent. “As sailors know, the Southern Ocean is a humbling place and actually going around the Horn is a wonderful moment. Profound,” he added.

“That voyage was my last as a professional sailor and I thought anyone could sail around the damn thing, but I always thought it’d be fascinating to actually walk on it,” he said.

The first hint we were in glacier territory was seeing the water change from blue-grey to pale green. We were making a 12-mile detour up one of the many fjords spiking off the north-south Messier Canal and more dolphins joined us, dancing through our milky bow wave.

A few breaks in the rain allowed us to peer up the steep mountain sides at the waterfalls streaking downwards. Around here, they don’t talk about inches of rainfall per year, but feet – on average around 25 of them (7.5m).

Nothing could have prepared me for the wall of opal ice cascading down to the water’s edge. Beneath the white surface, the blues sparkled a deep luminescent aquamarine, intensified under ancient pressure. When the sun popped out for a moment, the crystal wall lit up.

We were all dazzled, weaving the RIB through the floating ice. Tony was awestruck. So was I. I thought at the time that this one sight, a phenomenal natural wonder, was worth the price of admission on its own.

Halfway down the 1000-mile stretch, and after four days and nights of solid rain, we stopped off at the tiny hamlet of Puerto Eden. Here, Miguel Concha has set up a restaurant, which is basically a table in his tiny front room; a tight squeeze for five. What Miguel lacked in culinary skills, he made up for in hospitality, and we enjoyed a great afternoon on land, with amazing views over the harbour.

The huts here are basically tin shacks with thin insulation, so how these hardy folk survive the winters, with one resupply ship passing each week, is beyond me.

Taking a diversion off our southerly route, we branched off to motor up the north-easterly Peel Inlet. This spectacular fjord spikes deep into the Patagonian icecap, almost to the border with Argentina, with over a dozen glaciers descending to water level.

We enjoyed a break in the rain to absorb this spectacular sight. A group of dusky dolphins joined us for the afternoon, dodging icebergs with us and obviously relishing the cold tranquillity of the place as well as enjoying some new company. You could probably count the annual visitors to this imposing place on one hand.

Although an inlet fed by the sea, so much fresh water pours into this fjord that it felt like a mountain lake – clear, clean and bright. I was beginning to see why people are attracted to sailing in icy waters.

I interviewed ship’s mate, Hannah McKeand on film about her love of cold climes for a documentary in the lead-up to her North Pole record attempt in March 2008 (which, sadly, she had to abandon after injuring herself in a fall). Hannah has walked to the South Pole twice now. In 2006, she set a record of 690 miles in 39 days to become the fastest person to ski from the coast to the South Pole, solo and unsupported – a phenomenal achievement.

IN THE WAKE OF EXPLORERS

I should point out that Pryce’s new charter venture isn’t intended solely for extremists like Tony and Hannah. Skipper Dave was the winning skipper of the 2006 Clipper yacht Western Australia and is well used to looking after less experienced sailors.

He has a passion for sharing this extraordinary part of the world. “It’s one of the last wildernesses really – what the world would be like without humans. Captain Cook would have seen exactly what we see today when we sail through these Chilean fjords or Antarctic ice fields,” he says.

Ferdinand Magellan was the first European to sail through these waters in 1520, opening up the east-west passage through the tip of South America, since named the Strait of Magellan. He was followed by the likes of Sir Francis Drake, Thomas Cavendish and eventually, Joshua Slocum in 1896, aboard Spray.

Captain Fitzroy was the first to sail from the Atlantic to the Pacific further south in 1832. With him on the Beagle was young naturalist Charles Darwin, his passage marked by the Beagle Canal.

Most of the fjords, channels, islets and anchorages in Patagonia are named after 19th century sailors and scientists; every place with its own story to tell. But of the indigenous Yamana Indians, wiped out by the early explorers, missionaries and disease, there remains hardly a sign, except in the faces of the fishermen, and the odd sad museum full of dusty artefacts.

Our first real taste of civilisation was Puerto Williams. We’re not talking a metropolis here; just 2300 souls, mostly armada (navy) personnel. The town, only demilitarised since 1986, has an internet café, a couple of restaurants and a grocery store, but most sailors end up in the Micalvi, a 1925 German freighter beached here since the ’70s.

The Micalvi is the southern-most yacht club in the world, and proudly so. Club burgees from all corners decorate the saloon, which lists to port; a delightful quality for any drinking den. The visitors book is a fascinating insight into the cruising history of this far-flung spot, with names such as Isabelle Autissier and Sir Peter Blake standing out.

Pancho was the man behind the bar, occasionally stoking the wood stove and serving Pisco Sours to the motley clientele. Polish songs, Piscos, two blokes who didn’t like being asked questions, more Piscos – this warm oasis for cruising sailors, gently listing and listening, had heard it all before. I’m told it was 5am by the time we got out. You get the drift.

Finally, the big day. Cape Horn. Tony was awake at 4am, hearing the wind pick up in our anchorage 12 miles north-west in Puerto Maxwell. Here we’d used three shore lines to avoid contact with Santa Maria, a pretty red steel sloop run by a German skipper, also preparing to go around the Horn.

Conditions were not so great: 30 knots and rain. The sloppy sea rolled us around and off the Horn itself waves exploded as they crashed into the vicious-looking reef. Tony recorded 42 knots on the anemometer. As we rounded, looking up to the lighthouse and the huge Chilean flag rippling in the wind, it felt suitably awe-inspiring.

Round the Horn we made a dash for the cove where, protected from the biting westerly wind, steps lead up to the lighthouse. Timing the surges, Tony, Jamie and I jumped off the RIB, while Dave reversed to wait on Blizzard – a selfless call by Dave and Hannah.

The view from the lighthouse was breathtaking. This battered landmark, a turning point for sailors struggling against some of the harshest elements on Earth, looked the part. Bleak, ragged, isolated and wind blasted; black rock against white spray.

The lighthouse is manned by the Chilean Armada and we were lucky to come across Second Lieutenant Carlos Roberto and his wife Veronica, who were three days into their one-year stint here. Whether this was an honour or not we weren’t sure, but we appreciated the warmth of their welcome. Tony and Jamie kicked into tourist overdrive, having their passports stamped, banners displayed and pictures taken.

Overall it was a moving experience, particularly for Tony, who’d promised himself 14 years ago when rounding Cape Horn that he’d come back one day: “It was such a profound moment the first time, I just wanted to reconfirm that feeling and get a bit closer to it,” he says.

Personally, it was a privilege to stand there. Not many of us will sail around the Horn in anger, but we can at least pay our respects to those who did.

To me it was a fitting finale to this expedition. This is a remote wilderness, harsh and beautiful, barely touched by humans. Voyaging on boats like Blizzard is the only way any traveller will get to see some of these archipelagos, their teaming fauna, plus their abundant natural and nautical history.

For me, it was a journey about explorers – both following in their wake and enjoying their company.

Expeditions range from two to four weeks, costing between 1000 to 1600 Euros per person per week, based on between five and nine guests, plus flights to Ushuaia via Buenos Aires, or to Puerto Montt via Santiago.