Image conscious - a life behind the lens 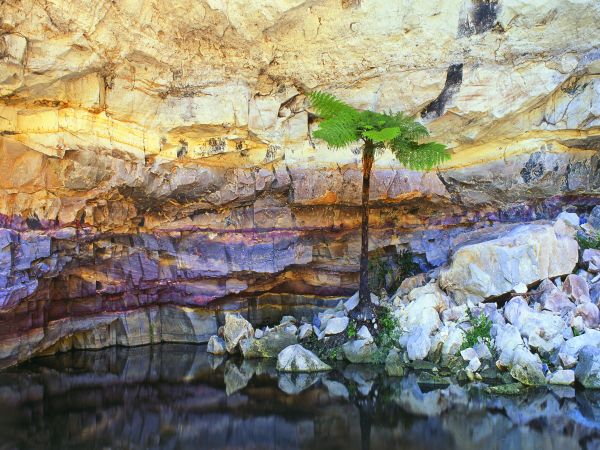 Precipices and stone and tree fern, Carnarvon Gorge National Park, Queensland Central Highlands. Widespread throughout Carnarvon Gorge, precipice sandstone is extremely porous, and erodes and weathers in unusual patterns and colours, as seen here. Contrary to one of the golden rules of landscape photography which says, thou shalt only shoot early in the morning and late in the afternoon, this picture was taken in the middle of the day, in the luminous shade of a steep-sided gorge.
Bill Bachman has criss-crossed Australia, and the world, capturing unique and thought-provoking images of wildlife.

Looking back over the many features of mine that have appeared in Club Marine over the past 23 years is a bit like watching a high-speed slideshow of my personal travels. Not quite my whole life flashing before my eyes – but a lot of it.

By my best count, I have written and/or photographed 39 stories for the magazine since the June-July 1986 issue (though designer Brendan Strauch, whose archives are obviously even more complete than my own, tells me there is one missing from my files, so let’s call it an even 40).

These stories have covered every part of Australia, from the WA coastline to the Kimberley, across the Top End and the Gulf of Carpentaria to the Torres Strait, down the east coast to Tasmania and back across to Adelaide, as well as cross-stitching a good deal of the interior. Each state and territory (except for the ACT) has been represented more or less equally, and five foreign countries – Japan, Italy, the USA, New Caledonia and New Zealand (three times) – have also been featured.

Cameras accompany me pretty much everywhere I go and I have always been awake to the idea of turning pleasure into profit by packaging my various adventures for armchair consumption. While some of the stories have been by-products of assignment work for other publications, many have been exclusive to Club Marine. Interestingly, none of my traveller’s tales have been specifically commissioned by the magazine, but a succession of editors have been consistently receptive to my offerings over the years and have published them generously – usually over a dozen pages or more. Believe me, it is rare to be granted that much magazine real estate these days.

The topics of these stories have included road trips, luxury resorts, desert islands, national parks, activities such as fishing or trekking and even abstract meditations on nature’s art. All have been travel-related in the broadest sense, I suppose. Given Club Marine’s readership, the only requirement for publication in the magazine has always been some connection, however tenuous, to water. Several pictorial spreads have even been about exactly that – water in all its forms and moods throughout Australia. Other themes have been Outback architecture (this one really stretched the water connection) and close-ups of native flora and landforms.

Pictorially, the work has ranged from pure landscapes to studies of people going about their daily business, at work and play – and quite a lot in between, including wildlife, aerials, and even the occasional yacht under full sail.

Of all the experiences I have shared with Club Marine readers, it would be impossible to choose a favourite, but among the more memorable are fly fishing in Montana, New Zealand and Tasmania (the latter with A River Somewhere’s Tom Gleisner as my trusty scribe), island-hopping in southern Japan, cruising the remote Kimberley coast in the days before the $2000-a-day luxury boats got into the act, and walking New Zealand’s Milford Track, where the spectacular scenery nearly made up for the sandflies. Among the most ambitious was a three-part series on the Murray River, where writer Amanda Burdon and I spent more than 10 weeks travelling from source to mouth over the course of 15 months. Other unforgettable destinations were the wild and beautiful Abrolhos Islands off Geraldton and the faraway waters of the Torres Strait; respectively pretty much as far west and north as one can go in Australia before arriving somewhere else entirely.

Apart from snorkelling with sea snakes in New Caledonia, probably the most surreal experience was doing the breakfast washing-up beside a crackling shortwave radio deep in the Kimberley wilderness, listening to reports of airliners crashing into New York City’s Twin Towers. This unwelcome news was followed by that of the collapse of Ansett, the airline on which most of our group had flown to Broome for an eight-day trek completely out of the reach of civilisation. Both reports were hard to put out of our minds for the remainder of the trip.

Over the years, I have shared numerous observations about photography on the road and my own personal equipment preferences and techniques, but undoubtedly the most significant development in my career has been the advent of digital photography, where film has steadily given way to silicon wafers. On virtually all of my journeys until, say, the last three or four years, film was quite a large component of my travelling kit and on the longer odysseys, required most of a medium-sized car fridge to keep the rolls of transparency film preserved. These days, the array of cameras and lenses I use hasn’t changed all that much, but the many dozens of rolls of film have been replaced by a handful of small storage cards and a laptop computer.

While travelling, I used to keep extensive notes that I could later match to a particular day’s shoot for the purpose of accurate captioning. Exposed films were carefully dated, numbered and stored, often for weeks at a time, until they could either be brought home or shipped in bulk back to a city lab for processing. Once home, further weeks of editing, sorting, captioning, filing and distributing slides would ensue. While there was always a certain present-unwrapping sort of thrill attached to opening all those plastic boxes of slides some weeks after they had been exposed, the joy was relatively short-lived and the process mostly long and tedious.

These digitally-enhanced days, I look at what I shoot as I go. I usually edit, sort and caption on the same day or maybe the next and – something I could never do in the past – I keep an extra copy or two of it all in a safe place, just in case. Much has changed, most of it for the better, and my work is now more efficient and less stressful than it used to be – and thus more fun.

Rather than looking back over almost two-and-a-half decades of travel and reportage with a sense of weary relief, I am strangely energised by it. There is much left to see and do and I hope to be able to continue telling my tales in these pages for many years to come.

Bill Bachman’s photographs and stories have appeared in a wide variety of magazines and books all around the world for the past 30 years. He is the author of Off the Road Again (1989, a visual diary of his first trip around Australia), Local Colour – Travels in the Other Australia (1994, a thematic exploration of the Australian interior with sales of 70,000 copies worldwide), Special Delivery – Aussie Mailboxes and other Roadside Attractions (2000) and The Murray River (2000, with Amanda Burdon).

When not looking through a camera, he can often be found with a fly rod or golf club in hand. He lives in Melbourne with his first wife and third dog, and continues to enjoy travelling in search of new and different experiences.