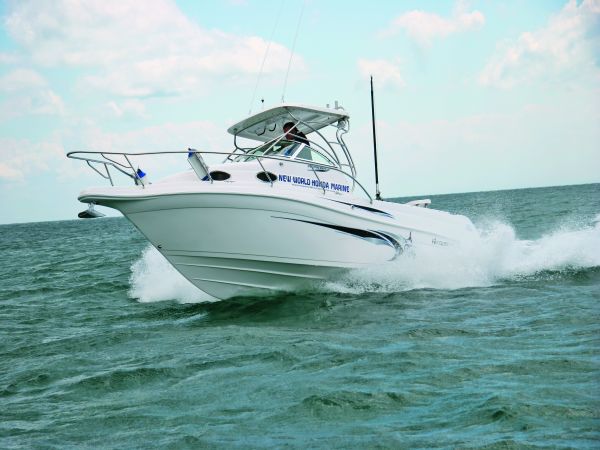 The Patriot is very much the result of feedback from boat owners
Serious anglers will find a lot to like in the newest Haines Hunter to come out of the factory. We take to the water on the Patriot 760.

Anyone who has spent any time with Haines Hunter boss, John Haber will know that he is passionate about pretty much everything to do with boating and enjoying time out on the water. When he’s not roaming the Haines Hunter factory looking for ways to improve his products, he’s likely to be found out on a Haines Hunter, fishing or diving with family and friends.

His passion for boating extends to his attitude to his commercial activities. In the eight years since he and his partners took over the iconic Australian brand, production processes, designs and quality controls have been completely overhauled. The entire range of Haines Hunter trailer craft is now manufactured at a modern state-of-the-art facility in Melbourne’s north-west, and Haber and his crew are constantly revamping and reviewing their range to try and pack in more value and features in what is a highly competitive market segment.

Which brings us to the all-new 760 Patriot, one of the largest boats in the Haines Hunter range and intended as a serious offshore fishing platform. In fact, the 760 is so fresh that our test boat was actually the first one out of the mould. Since Haber is a keen angler and had a lot of input into the design of the new boat, he was, not surprisingly, on hand to explain the thinking behind the layout and design of the 760.

“We made a point of getting as much feedback as we could from existing boat owners and incorporating it into the final design where we could,” explained Haber. “After all, they are the ones with the real world experience. So the Patriot is very much the result of feedback from boat owners.”

From bow to stern, the 760 Patriot has been produced as a dedicated bluewater gamefisher. It bristles with the sort of hardware and hardcore fishing features that any serious offshore fisher would appreciate. Like its deep (750mm) self-draining cockpit, which boasts high, padded gunwales and firm stainless steel toeholds to ensure that anglers have a solid and secure platform from which to fight big fish. The toehold rails can also act as tie-down points for stowing gear like dive tanks and eskies.

The cockpit is also spacious and easy to move around, so that four anglers wouldn’t feel too cramped in the event of a multiple hook-up. Four is also a good number for the Patriot as far as overnighting goes, since that is how many adults could tuck into the cabin for the night if needed.

A lot of thought has gone into the 760 Patriot design to ensure that space and utility is maximised. For instance, in the cockpit floor are two elongated, 150lt bait/kill tanks that also double as ballast tanks. By simply opening sea cocks in the rear of the boat, the tanks fill to add stability when at rest. As the cockpit floor height is above the boat’s water line, there is no risk of the tanks overflowing and they self-drain once the boat is under way.

And speaking of space, there are side storage pockets in both sides of the cockpit. They’re not that deep, but any angler would find more than enough gear to pack into them.

In the middle of the floor is a fuel tank big enough to pack in 500lt, which translates into pretty impressive range for those who like to catch their fish well out of sight of land.

Cockpit fishability is enhanced by a sturdy optional bait-prep station and four gunwale-mounted rod holders, while the seat pedestal bases double as a plumbed live bait tank on the passenger side, and a tackle drawer on the skipper’s chair.

The transom is home to a compact fold-out lounge big enough to seat two adults, while a lift-out side door in the starboard coaming aids access and will also be welcomed by anyone who needs to wrestle a large fish or diving gear into the boat.

Twin batteries and attendant switch gear are housed in an easily accessed compartment in the aft starboard corner.

Humming away at the rear of our test rig was a pair of Honda’s ultra-quiet 150hp VTEC outboards. The big four-strokes were very smooth, provided good power and torque and were well-matched to the hull. A single outboard option is also available and there is also a stern-drive, twin diesel option on offer that is likely to prove popular as long as fuel prices continue to rise.

Also at the rear on the starboard corner of our test craft was an optional transom door and boarding ladder, which would be welcomed by divers as well those occasionally indulging in tow sports.

Skippers will feel right at home at the raised helm, which offers excellent visibility. Elevated two steps above the cockpit deck, it provides good views in all directions, including overlooking the cockpit and transom for when big fish are brought to the back of the boat.

The dash is a broad, one-dimensional space that affords quick and easy visual access to all instrumentation. Our test boat was equipped with an array of Honda analogue-style gauges and an optional multi-functional Northstar M121 chartplotter/sounder unit that dominated the dash. Standard electronics are normally supplied by GME. All switches are maintenance-free digital items that negate the need for fuses or circuit breakers.

One touch that will be appreciated by the security conscious is the folding main instrument panel, which makes the task of stealing the electronics units a lot harder as thieves are denied easy access via the cabin wall.

Our test craft came with the hardtop option, which I would think would be ticked by most serious offshore anglers. It incorporates stylish and well-braced stainless supports that also offer plenty of grab-points for occupants while on the move. A set of clears comes with the hardtop to keep the elements at bay when needed.

Ceiling-mounted Navman MCB7270 27MHz and VHF7000 radios are within easy reach of the helm and an overhead light can be switched to red for night time running. The windscreen is a sturdy affair that also comes with a stainless grabrail as standard.

Adding to the Patriot’s overall seaworthiness and utility are robust 30mm stainless bowrails that are high enough to be useful from a safety perspective for anyone having to go forward. But then again, the standard fitment windlass should ensure that there won’t be too much need for trips to the bow.

While on most fishing-dedicated craft the cabin design can be a mere formality, the thinking being that it is likely to get used more for storage than shelter or sleeping accommodation, on the Patriot a lot of effort has gone into ensuring that it gives the boat genuine overnighting capability. Space has been used intelligently so that a total of four adults are able to share the cabin, albeit fairly intimately. With infill, the V-berth can sleep two, while an optional bunk mounted off the starboard cockpit side and suspended from the cabin roof can accommodate an average-sized adult. An extra berth, running abeam, has also been squeezed into the space directly under the helm deck.

It’s really a crawl space, but can be used for a spot of kip after a long day chasing fish.

The cabin on our test boat was fully lined, well finished and had plenty of natural lighting courtesy of the main roof hatch and a pair of windows on either side.

With an overall weight figure of 1850kg, the 760 is at the upper range of trailerable boats and will need a pretty sturdy tow vehicle if it is to be moved any distance. I would assume most owners will be locating their boats close to water or taking the mooring option.

The Patriot has a very solid presence on the water, a function of its bulk and weight. As we ventured out of Patterson River, Melbourne’s Port Phillip Bay obliged by presenting a 1-1.5m chop and a freshening southerly wind. A boat with serious offshore aspirations like the Patriot deserves to be tested in challenging seas, so we made the most of the opportunity to run it as the Bay chopped up.

Stability is certainly one of the Patriot’s strong points, both at rest and underway. The rising chop proved little in the way of an impediment, with the Haines Hunter 21-degree Performance

Deadrise Hull easily coping. Once up on the plane, it was simply a matter of pointing the Patriot in any direction and then setting the twin throttles to the desired wave-hopping pace. In head-on or following seas, the Patriot maintained its course and balance with confidence-inspiring finesse. At a cruising speed of around 40km/h, every now and then there is the inevitable ‘rogue’ wave, which experienced trailer boaties brace for. But the Patriot’s feathers were barely ruffled during our run – a testament to its good design and hull integrity.

It was also very dry, turned well and the steering and throttles were light on touch and good on feel. In fact, as far as on-water behaviour goes, the Patriot is a very hard boat to criticise. It is a hardcore platform for people who take their fishing seriously. It has the capability to travel out of sight of land and tackle big fish with ease, but is just as comfortable bobbing in the lee of a small bay with family and friends chasing minnows. This is a tough boat designed to handle anything that the Australian coastline can throw at it. If you fish hard, but like to do it in comfort, the Patriot is definitely worth consideration.

Optioned up, including the hardtop, lined cabin, folding bunk, tackle box and drawers, 120lt fresh water tank and pressurised water system, front and side clears, VHF radio, baitboard, outriggers, Mackay alloy trailer and twin cockpit spot lamps, the test craft was priced at $176,000, including GST. Minus the options, the price is around $160,000.