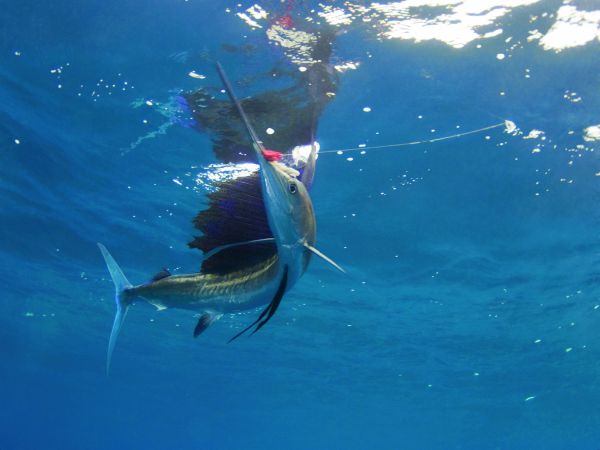 Strikezone was something that just happened and was never really planned. Working as a full-time fishing journalist, I always loved capturing the excitement of fishing on camera and had never thought about expanding into the world of video. But this all changed with a chance meeting I had with renowned award-winning cameraman Ron Croft. We met while doing a pilot for a fishing show and instantly hit it off. With Ron having contributed material to the likes of National Geographic, I quickly realised that together we could capture some amazing, neverbefore-seen footage. The fact that we both had a passion for filming and fishing helped, too.

Our aim was to produce a series of fishing DVDs that were more than a series of blokes just catching fish. Instead, we wanted to produce a documentary-style fishing show that was certainly loaded with wild fishing action, but also incorporated lots of practical ‘how to’ information to help anglers improve their fishing skills.

Realising that most anglers fish out of trailerboats, we decided to focus our efforts on catching big fish from small boats in well known locations, so all anglers could identify with us and what we were doing.

On top of this, we decided to incorporate an underwater element, so viewers could see what was actually going on beneath the waves. One thing we found lacking in all fishing shows was the ability to film the actual strike, so we decided to develop a trolling camera.

This all sounded good in theory, but when it actually came to developing a camera we suddenly discovered there was nothing suitable on the market. So Ron, who happened to be a camera technician in a previous life, simply built one himself.

I have always had a burning desire to learn more about the fish I hunt. The problem is that we only get to see what happens above the water so, in effect, we never really get the full picture. And as I came to realise as we developed our underwater filming techniques and technology, it was amazing how little we really knew about predator-prey interaction.

On our very first trial, we tied a live bait directly to the back of the camera and, not knowing what to expect, started trolling. Despite the fact the camera was running upside-down, we were instantly mesmerised by the scene. As we contemplated how we should realign the camera, a kingfish casually swam up and nailed the bait. We were hooked – even if it all did happen upside down.

A steep learning curve followed, especially during the initial year of filming, which I would describe as a combination of jubilation and despair. We crashed the camera into rocks and reef, trolled it upside-down, broke everything imaginable and even tangled it around the fishing lines, costing us more than a few fish. But through all the mishaps, we captured some amazing footage, much of which had never been seen before and which has since thrilled anglers right around the world.

One of the most spectacular incidents occurred when a mako shark took more than a passing liking to our Strikecam. I was in the process of letting out the cable, when suddenly it came to life in my hands. Confused, I glanced at the monitor to see nothing but black on the screen. Club Marine CEO, Mark Bradley and editor Chris Beattie were on board at the time and were, like me, surprised to see the cable disappearing rapidly into the deep. Fortunately, the inquisitive mako found the camera not to his taste and spat it out. Our last glimpse of him was as he took a final close look at the camera before going in search of more tasty treats. We were left with some amazing footage, while our $12,000 camera had plenty of scars after having been munched on by a hungry shark.

On the same day we also got an intriguing perspective on how some species hunt their prey, in this case, yellowtail kingfish. We were trolling a live bait over Long Reef on the coast north of Manly when we saw a pod of kingies slowly emerge out of the depths to surround our, not surprisingly, nervous livie. But the strange thing was that none of them actually went for the fish. Instead, a few of the smaller kingies came out of the pack to swim up next to the livie and gently nudge it with their heads. It was as though they were toying with their prey and not one actually ended up taking a mouthful. If we hadn’t had the camera in the water, we’d have never guessed what was really going on under the boat.

It certainly hasn’t been all success stories and along the way we have had more than our fair share of mishaps. Getting our first marlin bite on film was a drawn-out series of disasters. Eventually, after months of trying, we finally got the bite, only to have the tape fail!

Early failures with billfish soon became a distant memory and a change in Strikecam tactics saw us filming as many as ten fish a day. In fact, one day we even captured a sailfish at Port Stephens; something that had never been done before. Watching the marlin and seeing exactly how they attack has given us a whole new appreciation of what is really going on underneath the water.

Failing tapes wasn’t the only problem; there were also some human errors. One day we were filming a pod of dolphins as they ducked and weaved across the bow. The footage was sensational – until we realised no one had actually pressed the record button.

Then there were the constant repairs. At one stage, Strikecam broke every day for an entire week. It was terribly disheartening to sit up all night soldering wires together, only to have them break again the next day. Who said fishing and filming was all fun and games?

More recently, we have expanded our underwater arsenal to include a Videoray ROV (Remote Operated Vehicle). A hideously expensive device, the ROV has given us a whole new angle on filming. While filming for one of our DVDs, Tuna Time, try as we might we couldn’t get a shot of tuna feeding naturally in the cube trail. But with the new camera, we captured more than 20 minutes of feeding yellowfin for Tuna Time 2. It was amazing to look down the berley trail and see tuna casually scooping up the cubes.

On another occasion off Long Reef, we were catching kingfish on surface lures and, in an effort to get a new perspective, Ron drove the camera out, while we cast poppers near it. The footage was amazing as the kingies smashed the popper and at one stage it got so intense that the fish were actually shouldering the camera out of the way.

In the space of just three years, we’ve released seven Strikezone DVDs covering everything from catching marlin to bonefish. In the process, there have been some impressive achievements, like the biggest swordfish ever taken off Sydney or the massive bluefin tuna we landed off Tasmania’s hostile southern waters.

It has been an amazing and exciting few years for the Strikezone team, but what a lot of people don’t realise is just how hard we work to capture our footage. In Tassie, we fished for several days, enduring 40-knot winds and freezing conditions for just for one fish caught. As it happened, the script could not have been written any better as we caught the fish in the last half hour on the last day right on sunset.

I have to admit that I really enjoy producing the Strikezone DVDs and love sharing my passion for fishing. One of the main aims of Strikezone has always been to show people just how exciting fishing is and to encourage them to get out there and enjoy it for themselves.

Strikezone’ssuccess is highlighted by the stories we get from anglers who have seen the DVDs and have been inspired to get out on the water and do it for themselves. Sydney angler, James Yerbury watched Tuna Time and then went straight out to ‘Browns’ and caught his first yellowfin. And he wasn’t the only one to use Strikezone to help improve his fishing. Kev Ward and his crew watched Billfishing 2 before going in search of the elusive swordfish. They ended up catching a 73kg fish from a 5m centre console. It is success stories like these that make Strikezone so rewarding.

Fishing is only part of what we have tried to achieve with Strikezone. Our underlying priority is to encourage more people to get out there and enjoy the water and the animals that inhabit our oceans. In Tuna Time 2, we added a segment on great white sharks. The aim was to show that these awesome creatures are not just one-dimensional killers and that instead of fearing them, we should be learning more about them.

While I believe we have achieved an amazing amount in the last few years, Ron and I are certainly not sitting back resting on our laurels. We have a lot more to achieve and have plans for some interesting future projects, including a possible TV series and more Strikezone DVDs. We are also looking at developing some kids fishing programs to help get more and more people out on the water and catching fish, because for Strikezone our biggest success is hearing about everyone else’s captures.

To see more of the Strikezone collection, go to www.clubmarine.com.au and click on our Merchandising page.