Time for a transplant? 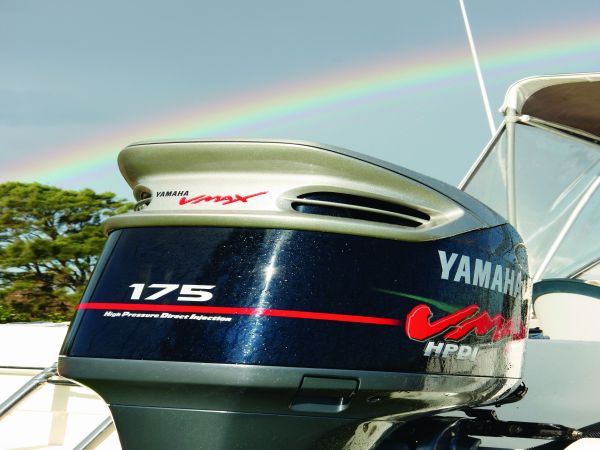 We spoke to a number of boat owners, who have upgraded their engines to breathe new life into older boats.

We eat spicy Asian food, drink French wine and boutique beer, drive the latest European cars and live in fancy concrete and glass towers, yet when it comes to boats, our tastes are about as cosmopolitan as meat and three veg.

Think about the evolution of marine craft and you realise that the basic configuration of runabouts has changed little in 20 years. Buyers generally stick with proven names and proven concepts that don’t date.

Outboard motor development, on the other hand, has witnessed more innovation in the past 10 years than the previous nine decades. Where conservative buyers may want a cheap and durable workhorse that will get ‘em to their fishing spot with minimal fuss for the next 20 years, what they now get is a high-tech, finely-honed instrument.

The new-generation machines provide fabulous fuel economy, low oil usage and smoke-free, environmentally-friendly operation. They start in a flash, troll like a dream and run ever-so-sweetly.

But they’re also expensive to buy and can be tricky to service … and therefore may not be running with a minimum of fuss in 20 years.

Outboards are like football referees in that the best ones stay in the background and let the game flow; they are doing their job when you don’t know they’re there. But the new technology has unwittingly pushed outboards to the forefront.

When considering repowering your boat, there’s much to think about and it can all get a bit confusing. A US survey showed that few owners thoroughly understood the benefits of new engine technologies such as direct injection, EFI, and two-and four-stroke configurations.

User-friendliness rated highest in purchase decisions, whereas there was barely a word about the green issues that inspired the DFI/four-stroke revolution.

With a new motor, you get warranty and parts availability, you get peace of mind from knowing it will start first time every time and you get superior performance from a given displacement. If your hull is sound, repowering makes sense.

The main thing to keep in mind when repowering is to talk to the experts, as there are all manner of considerations to factor in, such as the power rating of the hull, the weight of the new engine and how that may affect the boat’s trim and handling, plus shaft length and propeller specifications. These are all areas where making the wrong choice can end up causing grief, both financial and real.

Engine companies will tell you there’s never been a better time to buy, but no matter what you spend on a new motor you may only recoup half in resale value. The reality is that there are as many reasons to repower as there are transoms … Haines Hunter 580SF

This evergreen sportsfishing runabout (opposite page) from the early ‘nineties has seen three motors on its tail, yet continues to shine.

The first owner, a well-known boating and fishing writer, ran a Johnson 120, then came a 2002-model four-stroke Yamaha 115, and current custodian Paul Hardy has just lashed out on a brand-spanking Yamaha 175 HPDI two-stroke.

“The old four-stroke wasn’t quite big enough,” Paul said. “It didn’t get out of the hole very well with three or four blokes on board and it was too sluggish for skiing with adults.

“The 175 was about 15 kilos heavier, but the boat goes like a rocket. You can feel the acceleration and it rides better across the ocean.”

Paul reckons fuel efficiency is on par with the smaller four-stroke because the 175 isn’t working as hard. “At about 3000rpm, it’s scooting along at 28 knots, whereas the old motor ran at 4000 to 4500rpm for the same speed. In a 60-mile offshore fishing trip, the boat used 90 litres.”

He was more than happy to pay the $19,400 bill (less trade-in) for updating. He’s a baker, so he had the dough … but old jokes aside, he rationalises it by considering annual cost.

“I couldn’t see the sense in paying 50 grand to update the boat because it’s perfect for fishing. But if you trade in your motors every five or six years, it ends up costing you about $2000 a year.” Seatamer Eliminator

Of all the Honda four-strokes sold over the past 12 months, 85 per cent have been upgrades from a two-stroke, says Honda. One such convert is Melbourne Reel Time Fishing charter operator Matt Cini (top right), who had a bad experience with another brand.

The 7.4-metre alloy hull weighs three tonnes, so Matt opted for twin 135hp Hondas. He was most impressed by the craftsmanship under the cowlings, and in 600 hours of use this year the motors haven’t missed a beat.

“They’ve got plenty of grunt, no matter how many guys I’ve got on board, and they’re great on fuel,” Matt said.

Matt’s tip when considering a four-stroke is to go slightly higher in horsepower than you think you’ll need.

For a company that specialises in retrieving broken-down boats, it’s a bad look to have mechanical trouble with its tow vessel.

“The initial reason for the repower was due to lack of reliability of the previous models we were using. I would cross my fingers every time I tried to start my motors, which is not a good situation to be in when responding to someone in need of assistance,” director Matt Cummings said.

To date, Sea Tow has bought seven Suzukis, ranging from the DF175 up to the DF200.

“The motors are so quiet you often have to check they are running, they don’t stall like the others did, the plugs last over 200 hours compared to 70 and even at 200 we put them back in because they look so good and I no longer have to buy expensive, high-grade synthetic oil.”

Take one look at Henry Wiatr’s shiny Allycraft runabout and you can tell he’s the kind of guy who looks after his toys. It’s only the second boat he’s owned in 35 years, having been bought 10 years ago to replace a beloved fibreglass Nautiglass.

The alloy hull (left) is religiously washed and chamois-dried after each use, before being stored in a shed, and the original motor was regularly flushed and serviced. For all that, it failed during a skiing session on a nearby lake.

There was no compelling reason to change hulls, as the 510 Islander was the perfect size for the shed and had been meticulously configured for fishing. The motor, a 70hp four-stroke Suzuki-sourced Evinrude, was a different story.

“I ended up buying a Yamaha 80 four-stroke from a dealer who’s only 10 minutes away from home,” Henry said.

“The old motor was a bit down on power when we were fishing with four blokes, so I went for more. We’re getting heaps of speed and more responsiveness.”

Allycraft rates the hull to only 85hp and the Yamaha is close to maximum weight, but a buoyant pod extension easily copes with the extra 20 kilograms. Switching engine brands meant new gauges, and the dashboard has some neat infills where the old instruments went.

Dealer, Terrace Boating traded the Evinrude for $4000, leaving a $10,000 turnover figure. Money well spent, according to Henry: “I take the grandkids out. Gotta make sure everything is right.” Oyster punts

Cleanwater Oysters in St Helens, Tasmania, handles about 4.5 million oysters a year across four leases in George’s Bay, so their two 30-foot aluminium punts get a solid workout five days a week.

Dan Roden, the owner and managing director, is up to his second set of 115hp Mercury OptiMax two-stroke outboards.

“We’re really happy with them to be honest,” said Dan. “They’re reliable, but they are also incredibly fuel efficient and have great power. We carry a lot of weight and we need to get up on the plane quickly.”

Dan trades engines in before they’ve done 800 hours to ensure good resale. Meanwhile, the environmental benefits of the direct injection motors keep the company true to its name. Glastron V156

Who said you can’t teach an old dog new tricks? Certainly not Stephen Addison (below) from Murchison, Victoria, owner of a classic Glastron bowrider that was built in 1968, but now sports a Mercury engine 40 years its junior.

A “drinking problem” – the motor’s, not Stephen’s – spurred him to replace the old Mercury 140hp blueband motor with a new four-stroke 115. The six-cylinder, triple-carbie motor burnt fuel like there was no tomorrow.

It was also proving to be unreliable and there were comments from some of his passengers about the smoke and noise.

Stephen uses the boat on Lake Nagambie to give joyrides to children with disabilities, along with their siblings and carers from Family Care Shepparton.

“What a beautiful engine!” Stephen said of his new Merc. “It looks like a killer, it’s easy to start and the boat just sings. The engine is so quiet.”

The extra weight made the old hull sit a tad lower in the stern at rest, but is more than compensated for by its ability to get planing quickly and easily. Also, a complete redesign of the dashboard was required, but dealer Shepparton Marine handled the changeover to Stephen’s satisfaction.

The motor change even inspired him to fit a new stereo, new carpet and two new batteries.

Going to the expense and effort of using kevlar in the construction of this ’94-vintage, 19-foot cat (below) didn’t save anywhere near the kilograms owner Wayne Thomsen has achieved simply by repowering with Suzuki’s lightweight 90s.

The former Honda 75s, purchased in 2000, were 60 kilograms heavier in total, which shows how much four-strokes have improved. Honda has also now released a lighter-weight 75.

“The pods used to be underwater and we’ve gained seven inches in height,” Wayne said. “That means we’re no longer fishing with our feet in water.”

Fuel usage has dropped from 1.1 litres/km to 0.8 litres/km, giving the Kevlacat an extra 50 kilometres of range. Instead of carrying four jerrycans of petrol, Wayne now takes only two for emergencies.

Please note: Club Marine members who are considering repowering their currently insured boats should make sure they supply all details of their new engines to Club Marine or their broker or agent so that policies can be amended accordingly, specifically to ensure the sum insured is correct. You should also make sure the replacement engine does not exceed the recommended horsepower limit for the model of boat.