Conservation goes to the dogs 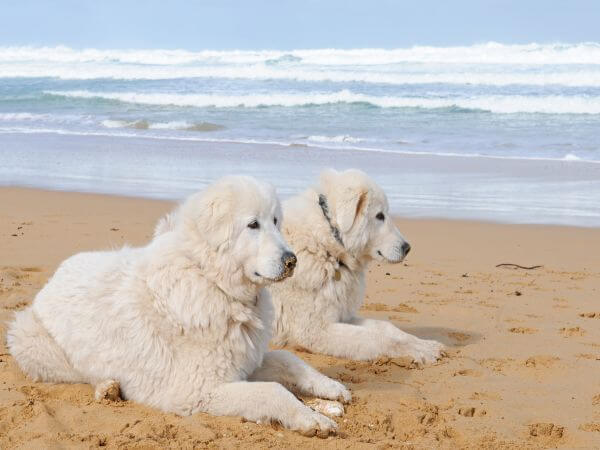 Warrnambool’s fairy penguins make a surprising comeback, thanks to Coastcare and a team of oddly-named sheep dogs.

Down on the southern coast of Victoria, about 75 metres from the shoreline of the city of Warrnambool, is a rocky fist of land known as Middle Island. A small, ruggedly beautiful land mass, Middle Island is known to locals and tourists for its punishing terrain and its native colony of fairy penguins.

Sometimes called ‘blue penguins’ because of their slate-blue plumage, fairy penguins are the original ‘true blue’ Aussies, having inhabited the southern coast of Australia for thousands of years. Fully grown, they stand no taller than 45cm, making them the smallest species of penguin in the world.

For years, Warrnambool fishermen have grown accustomed to the sight of the Middle Island penguins comically waddling back to their burrows at the end of a long day’s fishing, even as many of them were doing much the same. But in recent years, life for the penguins has taken a drastic turn for the worse.

Regular assaults by marauding bands of foxes swimming across the tidal channel almost wiped out the once-thriving island colony. Often, up to 100 penguins were killed in a single night. Penguin counts, conducted by Coastcare volunteers, revealed the scope of the tragedy. In 1999, there were 600 penguins and 350 burrows on the island; by 2005, there were no burrows and only four penguins left.

Faced with the almost-certain decimation of its local penguin population, the Warrnambool town council turned to the community for ideas. “We tried everything from cages to shooting foxes,” says Ian Fitzgibbons, Warrnambool council’s environmental planner. “What we needed was to find 24-hour protection without a big budget.” Some suggested a fence, but, aside from being unsightly, expensive, and probably unsuccessful at keeping the foxes out, a fence would only make it harder for the penguins to return to their burrows.

As any Australian farmer can tell you, foxes are a serious problem. Introduced from Europe in the 1870s, foxes are Australia’s worst predator. Estimates suggest that, in the average rural area, there are approximately three foxes per square kilometre. In urban areas like Warrnambool, there are as many as five foxes per square kilometre. That’s one of the reasons why it is so rare to see a colony of penguins so close to a major city. And the scourge of fox predation is not limited to small country towns. Recently, the city of Sydney hired professional snipers to protect its local colony of fairy penguins on North Head.

“It’s pretty special to have those penguins right here in the heart of Warrnambool,” Councilman Fitzgibbons explains, “and we wanted to ensure that we could maintain the penguin colony right in the heart of the city.” But the council also knew that, because of a limited budget, it would have to be creative.

The solution came from a free-range chicken farmer known to locals as ‘Swampy’ Marsh. Swampy had been using a breed of Italian sheep dogs to protect his chickens from foxes at his farm, just 25km inland from Middle Island. Swampy knew what the maremmas were capable of – they had successfully protected his 5000 chickens and 3000 chicks from fox predation for almost a decade. Why, he asked, couldn’t the dogs do the same for Warrnambool’s penguins?

“Swampy had been campaigning for years to convince people that the maremmas would be able to protect the penguins,” says Fitzgibbons. And so, after exhausting all other options, the town council invited Swampy and the local Coastcare group to an official meeting with State agencies to formally suggest the idea.

Put simply, the council agreed with Swampy. In the end, his cold logic was irrefutable. After all, there is a certain amount of justice in using European dogs to protect Australian birds from European predators. “We decided to run with it,” said Fitzgibbons.

On a rocky outpost of land called Pickering Point across the bay from Middle Island, a trio of men are being pulled toward the shoreline by two large and energetic white dogs. The dogs – a handsome pair of female maremmas named Eudy and Tula – are the new stewards of Middle Island and they are eager to get to work. As the men follow the winding path to the water’s edge, Eudy and Tula leap and tug against their restraints like race horses at a starting gate.

It’s been three years since the ‘Maremma Project’ began and although it has not been without incident, almost everyone agrees it has been a tremendous success. At first, after the council announced it was green-lighting Swampy’s plan, many dismissed it as bunk. A lot of environmentalists didn’t like the idea of having dogs within a marine park sanctuary, no matter what their intentions. Others predicted the dogs would interfere with the penguins’ breeding cycle.

Today, there are over 100 penguins on Middle Island and, thanks to the information gathered by Coastcare, there is ample evidence that fox predation stops completely when the dogs are on the job.

The man who does his best to keep the dogs reigned in is Warrnambool’s new environmental officer, Dave Williams. Dave officially became the maremma dog wrangler last year, when council decided that the project needed a fulltime manager. Undoubtedly, the project would be almost impossible without the help of local Coastcare volunteers, and today John Sutherland and Thoren Robertson accompany Dave, Eudy, and Tula on their journey to the island.

The dogs acquired their unusual names in a local ‘name-the-dogs’ competition. “The scientific name of fairy penguins is Eudyptula Minor,” Williams says, by way of explanation, adding hopefully: “It sounds a bit Italian, doesn’t it?”

The last pair of maremmas assigned to Middle Island – also named in a competition – ended up being called ‘Electra’ and ‘Ne’ve’. (“Ne’ve’s the Roman god of light or something,” says Dave).

Electra and Ne’ve spent 8 months protecting the penguins of Middle Island, during which time the penguin population grew 70 per cent. Sadly, the maremma project was thrown into jeopardy when the dogs accidentally killed 10 penguins.

Williams, like most of the townspeople, was stunned. “One of the theories around town is that there were some trespassers on Middle Island that were winding the dogs up. So, it was possible that the dogs were trying to gather the penguins up into one spot,” he says. Although no one thinks that Electra and Ne’ve turned against the penguins in a predatory way, they were retired from the island and taken to Swampy Marsh’s chicken farm.

RETURN OF THE MAREMMAS

One of the reasons Dave Williams was brought in was that it was decided that the training of the maremmas needed to be intensified and until the new dogs were ready, someone should supervise their trips to Middle Island. “We brought Eudy and Tula up very differently,” Williams says. “We’ve introduced them to the island much more slowly.”

Eudy and Tula are only one year old and are still in training. They spend most of their days looking after a small flock of chickens on a local Aboriginal co-op. Ever since the dogs were eight weeks old, Williams and a variety of Coastcare volunteers have been taking them on regular supervised visits out to the island to bolster their familiarity with the penguins and the terrain.

The first thing the dogs do when they hit the island is run around the edge of it, doing what Williams calls ‘scent-marking the perimeter’. To the untrained eye, it looks a lot like peeing. But Williams explains that scent-marking is all a part of the preventive measures that maremmas take to protect their flock. “The foxes can smell the scent from the mainland,” he explains, “and usually that’s enough for them to realise that those two big dogs are back on the island, and they stay away.”

Very soon, Eudy and Tula will start their overnight patrols and provide round-the-clock protection to Middle Island’s growing number of fairy penguins. Around the same time, Coastcare volunteers will undertake a new penguin census to determine how many more penguins there are on the island since the last count.

Expectations are high. Conservationists are predicting that, provided the maremma project continues to do well, within six or seven years the fairy penguin colony could be back to full capacity.

Dave Williams, for one, has complete confidence in the penguins’ new pair of guardian angels. “If anything comes into their territory, they’ll be all over it,” he says, petting the dogs. “It’s what they live for.”