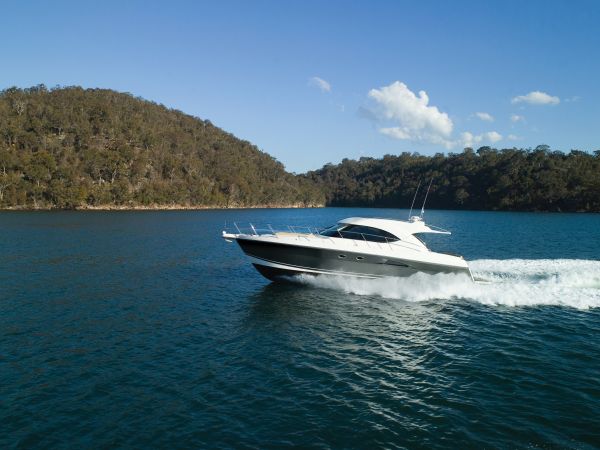 of the eight Rivs sold during this year’s Sydney International Boat Show, four had pods
Riviera has embraced the pod drive revolution, using both Volvo Penta IPS and Cummins MerCruiser’s Zeus drives in its new line-up.

Not since a Viking captain named Sigurd gave his oarsmen a swift clip behind the ears, then spurred them on with the promise of pillage and plunder, has a vessel seen such an instant performance boost.

In its shaft-drive guise, the former Riviera 4700 Sport Yacht was no slouch, its torquey 575hp Cat C9 engines providing a top-end speed of almost 56km/h (30 knots). Now renamed the 5000, and with twin Cummins QSC 600s driving Zeus pods, it achieves just over 60km/h.

Mid-range cruise figures are significantly better again, while the pod drives enhance fuel economy by 10 to 12 per cent.

Some guys would sell their dear old grannies for that kind of improvement. It’s what they buy too – of the eight Rivs sold during this year’s Sydney International Boat Show, four had pods. That included the test boat, which was purchased off the shelf.

A couple of years ago, the 4700 was deemed good enough to win the Australian Boat of the Year title. Changing it was risky, but to suggest it’s a new model with the 5000 badge is stretching the truth somewhat. The 4700 was already 54 feet (16.7 metres) long once the platform and sprit were factored in, and actual hull length remains 50’9” (15.5 metres), so it simply brings parity to the dimensions and model designation.

It also brings the boat in line with its SY sisters, from the 3600 to 5900, which all sport pod drives. They obviously suit people who are unfamiliar with big boats or are first-timers – those who prefer a joystick over levers and thrusters.

The existing hull was a relatively easy and cost-effective conversion candidate, for there were prop tunnels plus sufficient cockpit floor height to fit the drives. In this case, Riv’s designers chose Zeus over Volvo’s IPS because they deem the pods to be more adaptable for their installation requirements. There are other integrated attributes, like automatic trim, autopilot and a GPS-inspired ‘Skyhook’ system that holds the vessel’s position.

Moving the motors aft demanded some shuffling of fuel tanks and bulkheads to correct the weight distribution. Tankage capacities are unchanged, though the greater fuel efficiency yields a longer range. Also, most people fit desalinators so they’re not carting too much dead weight in water.

In a bid to lighten dry displacement, the lamination schedules were reviewed. The review resulted in the use of a foam-cored timber veneer for drawers and cupboard carcasses, reducing weight without compromising structural integrity or the outward appeal of the cherry, teak or beech trim.

The hull now rests slightly higher in the water and because the pods provide direct push, the bow rides a little higher and drier, especially at displacement speeds.

At the blunt end, the tender garage was a must-keep feature. Designers managed to keep room for a 3.1m Zodiac in between the Zeus legs. The lid opens electrically and the hydraulic boarding platform submerges about 450mm, so it’s an easy launch and retrieval process. Lift capacity is 350kg.

Feedback from customers suggested that more seating was needed around the cockpit table. Along with the option of a height-adjustable table that converts to a sunbed, there’s now aft-facing seating and a table as well.

Sacrificed for the new alfresco dinette were a fridge and sink to port. The icemaker has been shifted to starboard and the galley sink and fridges are close enough to service the cockpit. Amtico flooring in the saloon can stand up to wet feet.

Galley upgrades include the use of Vitrifrigo drawer fridges, which are secured by aircraft-style catches. The benchtop was widened by 50mm and there’s space for an optional dishwasher and a microwave.

To port, the lounge now wraps around the drop-leaf table instead of being cut off at the end. All great for entertaining.

The dashboard is raised and redesigned to accommodate two Raymarine C14 screens, as well as the Cummins/Zeus Vessel View gauges. Sport Yacht customers apparently like the additional navigation screen for longer trips. The joystick is handily placed at the top right and the autopilot/Skyhook control panel is immediately beneath the wheel.

As with the Euro-inspired 5900, the dash is rendered in dark grey leather. The high-backed helm seats are the same colour, helping them to tie in, or you can choose a material that complements the lounge.

It’s the mid-cabin that gains most from having pods. Where previously there were only double bunks, a lateral double berth now occupies the former machinery room. It also has a single berth and there’s plenty of headroom and storage space.

The forward cabin’s island double berth runs more than two metres, so taller people can have a comfortable night’s sleep. It has a spacious ensuite, with separate shower stall.

To starboard is the third cabin housing bunk beds, although in lieu of this you can have a foyer with leather lounge.

A mid-aisle cupboard can be used as either a laundry or pantry, with washer/dryer combo or a fridge respectively. The former engineroom is now the perfect resting place for the Onan 11 kVa genset, air-conditioning units, electrical components and more.

The saloon also becomes a restful place for passengers, now there are no diesels underfoot. Close the beautifully-framed door and peerless, pillar-less hopper window and it’s nice and quiet. At slower speeds, the engines emit a faint whir reminiscent of a passenger jet. Manoeuvrability, meanwhile, is akin to that of a jetboat.

Compared to the conventional 4700, the performance almost defies imagination. There’s no planing transition, just gentle acceleration until the turbo’s kick in. If you’re in a hurry, hole-shot ability is brilliant.

Being a Mulder hull, it travels flat and fast and, at full stick into a 1.5m sea, the ride softness and noise suppression were apparent. To chew only 50 litres per side at 30km/h (16 knots) is pretty darn good, while to use 180 litres total at a bit over 50km/h (28 knots) is exceptional for a 50-footer weighing 18 tonnes.

As we passed a special-purpose ship called the Happy Buccaneer, which had the words BIG LIFT emblazoned on its topsides, it occurred to me that the Zeus pods had elevated the 4700 hull to new heights in performance, handling and space.

The finish and aesthetics remain ever sleek and sophisticated. Base price is $1,095,000.

If two is great, three must be …

If the sight of three ignition keys is a spinout, wait till you start the motors!

The idea of fitting triple 435hp IPS drives to Riviera’s 51 Enclosed Flybridge came from the president of Volvo Penta’s US company. It was supposed to be a custom job, but the Mulder hull took to the pods like a duck to water and one drive convinced Riv to offer it as a production option.

The keel was removed, as were the tunnels, and they inserted a base for the centre drive. So good is the tracking ability of IPS that the keel hasn’t been missed. You can take your hands off the wheel, even without the autopilot engaged … think of it as having three keels.

Flexibility-wise, the skipper has ultimate throttle control. In joystick mode, the central motor sits mute, while under steering operation, all three units mimic each other. The port throttle lever controls both the port and middle engine, though if the starboard engine shuts down, the centre shifts to the starboard lever.

For long-range cruising or trolling, the central engine can work alone. You can sync all three motors on to one throttle lever, or depending on your fuel burn and speed requirements, you can have two engines running and one static. The props don’t mind being turned.

There’s an external docking station located on the flybridge overhang and it has been enhanced with Volvo’s Sportsfish mode, which allows the skipper to back-up on fish like a normal shaftdrive boat.

Gameboats of this length used to sacrifice manoeuvrability – but not any more. The hull can spin so fast you literally get dizzy. At speed, too, the steering was so responsive that it had to be dampened to 11 degrees, or 28 degrees in joystick mode.

From a maintenance perspective, there is greater complexity, but negligible cost difference. Two 12-litre engines require roughly the same amount of oil as three six-litre engines, plus filters and impellers etc get bigger.

Volvo Penta has done comparisons with its new IPS2 version – the 11-litre, 600 and 700 horsepower beasts – and the difference is within $50. Servicing access is adequate, but a bit on the squeezy side.

On the 51 Enclosed, Caterpillar C12s are standard. The more popular 825hp MTUs are a $78,000 option and the premium for triple IPS is around the same.

The fuel-efficient IPS boat has a single 3300-litre fuel tank for a range of 3300km (1800 nautical miles), where previously there was a standard 2700-litre tank supplemented by a 1000-litre long-range tank.

A nice improvement to the 51 is the dashboard, modeled off the 61. The console previously extended full-width, with a helm seat in the middle and a bench next to it, but customers wanted to get three people comfortably sitting near the skipper and enjoying great visibility.

It now has a wrap-around lounge extension and abbreviated dash, while still fitting three screens across the console. Though you expect to find a raft of engine gauges, all three motors are monitored on one unit, and are represented by different colours.

One of the Raymarine screens can also relay engine data, compensating for the overhead placement of the Volvo gauge.

Some 51 Enclosed customers will stick with shafts because there’s more to life than pure performance, but as with the 5000 SY, a good boat has been transformed into a great one. Suffice to say that if the 51 was a female 800-metre runner, questions would be asked …