Leaving the world in their wake 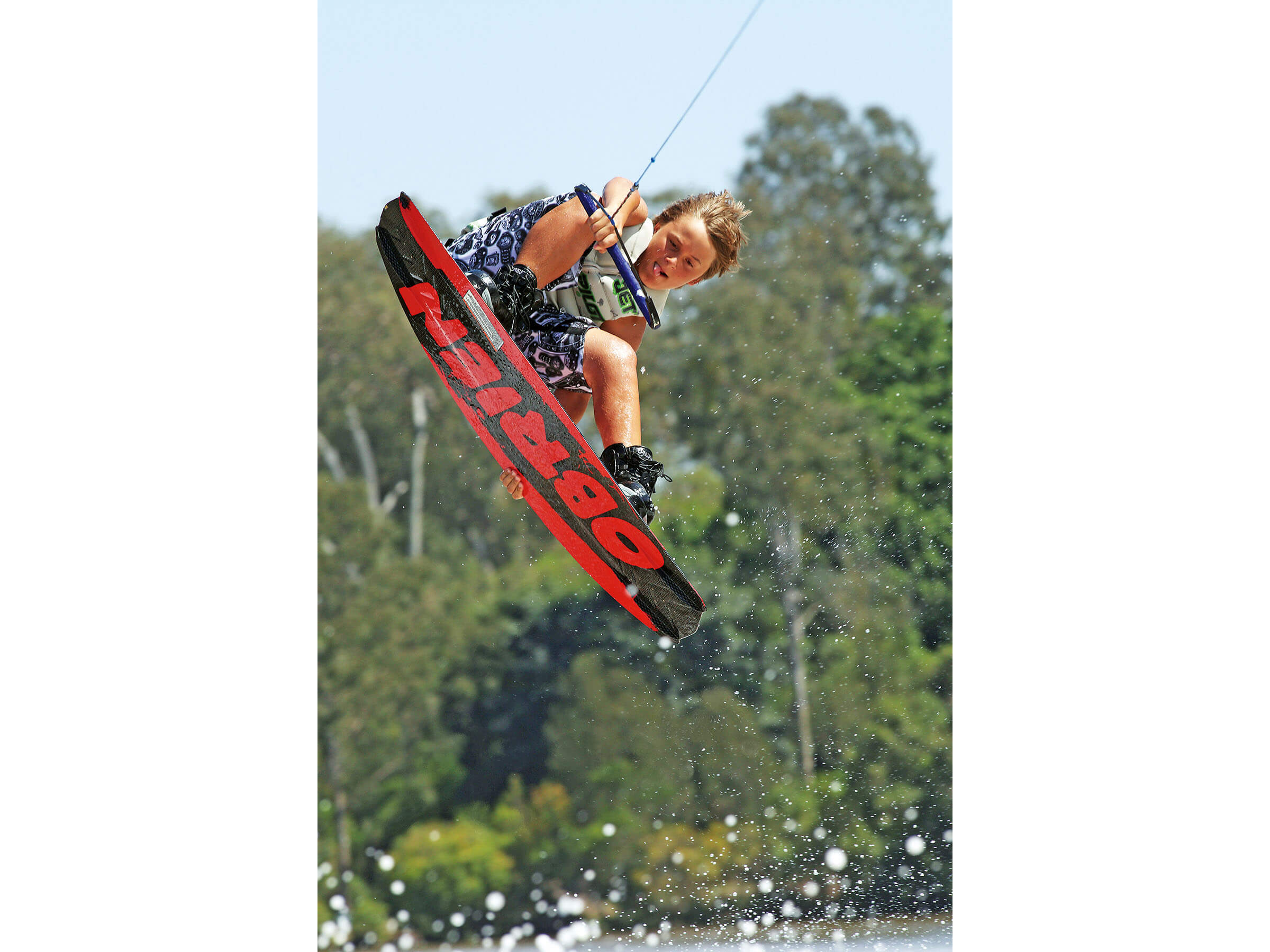 Queensland’s Teunissen brothers have propelled themselves to the top in the high-pressure world of competitive wakeboarding.

Meet the Teunissens, Bradley, 15, and Cory, 12, two down-to-earth, well-mannered and extremely likeable brothers from the Brisbane suburb of Fig Tree Pocket. Their sponsors believe they have the potential to become the greatest wakeboarders this country has produced and after seeing them in action, it’s hard to disagree.

They also talk about the countless friends they’ve garnered around the world; school kids just like them, who have the talent to compete on an international level. Brad and Cory keep in constant touch with their interstate and overseas wakeboarding buddies on Facebook and via email, and they know they’ll never be short of a bed when they are old enough to compete in other countries without their parents tagging along.

Brad was three years old and Cory two when they began waterskiing under the watchful eye of dad, Jeff Teunissen, a champion barefoot waterskier when he was just 15. Jeff’s purchase of a Hyperlite Premier wakeboard six years ago was the cause of great excitement in the household and after just a couple of attempts, both boys were up and running and on their way to becoming the world’s best in their respective age divisions.

Realising their potential early on, Jeff registered his boys with the Queensland Wakeboard Association, to ensure they had the opportunity to participate in competitions and learn from other kids who were also involved in the sport.

These days, Jeff’s two 2008 Malibu Wakesetters (they keep one at their ‘weekender’ at Somerset Dam and one at home) barely get the chance to dry off. Brad, Cory and their dad spend about three hours a day, three days a week, practising on the Brisbane River and travel to Somerset Dam almost every weekend, where the boys can easily spend up to six hours a day on the water.

The 133,500 hectare Somerset Dam, which can hold twice the amount of water of Sydney Harbour, provides the dedicated duo with the perfect playground to practise their tricks.

Although there is no shortage of excellent wakeboarding locations in Brisbane and around Australia, it seems Brad and Cory have embraced a sport that plays poor cousin, in media, sponsorship and general awareness terms, to many other more high profile sports in Australia. The recent cancellation of the Australian Pro Tour, due to lack of support, bears testimony to this.

Both boys agree that if they are to make a name for themselves in wakeboarding, it is likely to be somewhere other than Australia, such as America, Canada, Italy, France or Korea, where the sport is widespread and its competitors revered.

“We know it’s not a big sport here, not like it is overseas,” says Brad. “When we travel as a team to compete, we wear uniforms and when people see us at the airport, they say stuff like: ‘What are you, a gymnastics team?’ And we say, ‘No, we’re wakeboarders’. So many have no idea what wakeboarding is. This happens all the time, even in Australia. If you say you surf, everyone knows what you do. If you say you’re a wakeboarder, you have to explain to them what it is. I say, ‘It’s like a surfboard strapped to your feet’,” laughs Brad.

But on a more serious note, he adds: “There’s no money in Australia for wakeboarding. If you want to be a wakeboarder, you have to go somewhere like Florida; that’s where the home of wakeboarding is. To make any money in this sport, you need to be in the top ten in America. When I finish school in a couple of years, I will definitely go to Orlando (Florida).”

When asked if wakeboarding is an expensive sport, the look on Jeff’s face says it all. He knows that in the future, Cory and Brad will need to rely heavily on sponsorship if they are to reach their peak in the sport they love. Not only will the boys be faced with huge travel costs, they will need to maintain an expensive collection of the latest gear and equipment if they expect to be competitive on the international circuit.

It seems Jeff has instilled some solid values in his boys in relation to sponsorship, especially in a sport where sponsorship dollars are limited and opportunities few and far between.

“I don’t want them to ever take for granted anything they get from sponsors, or think they get these things for nothing. They have worked hard to be where they are and need to work hard to maintain that level. Nothing in this world is free and we value the support of our sponsors. Wakeboarding is an expensive sport to be involved in,” says Jeff.

Brad and Cory both appreciate the benefits of having sponsors on their side and are proud that so many have come forward to back them, including Club Marine, which provides insurance for the Teunissen’s two boats.

“Our sponsors are really awesome,” says Brad. “They help us out with boards, gear and clothing. Jet Pilot has been unbelievable, Malibu boats are fantastic and Scotty Kel at Black Diamond, on the Hawkesbury in Sydney, has been really supportive, too. I am sponsored by Liquid Force and Cory is sponsored by O’Brien Wakeboards. Board M Board Store also helps out with gear.”

Brad explains how, every month, the brothers show their appreciation by sending through a report to their sponsors.

“We say how we’re going, what we’ve been doing, if we’ve made any progress with tricks we’ve been working on; pretty much everything we’ve been doing over the past month. I send it to Dad first and then he sends it on to our sponsors.”

Despite the competitive nature of their sport, Jeff says the siblings have always remained great mates.

They spend hours together on the water and once their feet are dry, they’re bouncing away on a trampoline in their backyard, practising new tricks, twists and turns with the aid of a ski rope tied to a nearby tree.

On the water, with one brother in the observer’s seat and one on the rope, they constantly signal to each other in their own wakeboarding ‘sign language’, most of which only they understand. Both are quick to acknowledge and compliment the other’s ability and continually encourage each other, both on and off the water.

Despite also being a keen rugby union player, Brad says he and Cory still need to work out at the gym to maintain the level of fitness and strength required to stand up to the rigours of competitive wakeboarding.

“When you’re in the air, it’s all about using your arms, so doing weights really helps. When you’re competing, you can spend hours on the water, so it’s easy to get really tired if you’re not fit,” says Brad.

Behind the boat, Brad rolls off an array of tricks like a seasoned professional twice his age, including the ‘Mobe’, a backflip with a 360, which helped him clinch the Boys World Wakeboarding Championship in 2009, and his favourite, a ‘Heelside Melon 360’, which, he says, “feels really cool.”

He may be the ‘little’ brother, but once he straps on his wakeboard, Cory becomes a giant. Reaching heights of up to two metres, the Brisbane River is his stage as he effortlessly works his way through his showcase of tricks, including ‘scarecrows’, ‘tantrums’ and his favourite, the ‘tootsie roll’.

“I keep pushing myself to get better. I know I am a bit younger than all the other wakeboarders, but I know I can do all the tricks they do. If they are up to it, so am I. I still can’t do the big ‘superman’ things Brad does, but I’m working on it this weekend,” he says, with a confidence and maturity far beyond his years.

At the time of writing, Cory had recently landed his first ‘720’, an extremely difficult double aerial rotation that’s out of the realms of many older, more experienced wakeboarders.

Cory explained the inspiration for his latest feat: “If I landed a 720 before my 13th birthday, Dad said he would get me a new iphone.”

If I was Jeff, I wouldn’t be throwing down the gauntlet to either of his boys. This high-flying double act seems destined to come out on top.