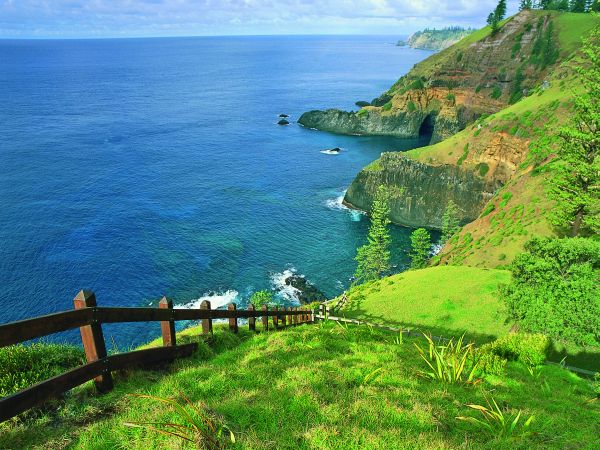 When it was discovered by Captain James Cook on October 10, 1774, no one could have imagined what a turbulent future lay in store for tiny Norfolk Island, hidden away in the south Pacific.

Cook, in taking possession of this island located almost midway between Australia and New Zealand, and some 1400km off the Australian coastline, named Norfolk Island in honour of the Duchess of Norfolk, describing it in his log as “an island paradise, very fertile and uninhabited”.

Fourteen years later, on March 6, 1788, British Lieutenant Philip Gidley King arrived at Norfolk Island with a landing party that included 15 convicts and provisions for six months. It was the job of this advance party to prepare for the arrival of almost 1000 more convicts who, on arrival, were also put to work.

For the next 15 years on this remote outpost, convicts, working under harsh conditions, produced a wide variety of crops, which were shipped out to Botany Bay. By 1803, the mainland settlements were producing sufficient food to meet their requirements and the penal colony on Norfolk Island was closed. Some free settlers (mostly ex-convicts) stayed on for a while, but by 1814, the whole island had been abandoned. Mindful that other nations (particularly France) might take advantage of England’s decision to vacate the island, orders were given for all buildings and infrastructure to be destroyed. The island thus remained unoccupied from 1814 to 1825.

However, with the continual flow of prisoners from England, gaols in New South Wales and Tasmania were becoming overcrowded, particularly when it came to those convicts deemed to be ‘incorrigible’, including repeat offenders and those who had become brutalised and numb to the effects of floggings.

For these ‘worst of the worst’, the decision was taken to reopen Norfolk Island, where the conditions of their imprisonment would come to be described as ‘hell on earth’. This new second convict era for Norfolk Island began on June 6, 1825, and continued until 1855. During this time convicts were worked tirelessly to rebuild the earlier destroyed settlement, constructing a large new prison, many public buildings, mills, drains, grain silos, stables, roads and bridges. All the while, they endured unimaginable cruelty and appalling conditions, with meagre, poor-quality rations and sanitation.

At its peak, Norfolk Island was home to 2473 convicts, but tens of thousands of poor wretches spent time here during the prison’s long years of operation.

By the early 1850s, with new prisons being established in Tasmania and on the mainland, as well as some distasteful reports flowing back to England on the inhumanity that was manifest on the island, the decision was made to close the Norfolk colony. On May 5, 1855, the last mass evacuation of prisoners (mostly to Tasmania) took place, leaving only 10 convicts behind, supervised by a handful of soldiers. It was the end of a cruel and bloody era for the island; a new and much more peaceful one was soon to follow.

Meanwhile, some 4100 nautical miles away to the east, on Pitcairn Island, the descendants of the HMS Bounty mutineers (who rebelled against Captain Bligh back in 1789 and settled on Pitcairn with a number of their Tahitian wives) had, by now, grown into quite a sizeable community. In fact, their small and very isolated island home was running out of food and water. With the passing of time, the crimes of the original mutineers – some of whom were hanged after being forcibly repatriated to England – were forgotten, and Queen Victoria granted the now-to-be-abandoned Norfolk Island wholly over to the Pitcairn Islanders as a new homeland.

On June 8, 1856, Norfolk’s new residents – 40 men, 47 women, 54 boys and 53 girls – arrived aboard the ship Morayshire. The remaining Norfolk Island convicts were shipped out and the Pitcairners, who had been brought up with strong Christian beliefs, settled into their new island home.

In the early years, the island’s economy was sustained by whaling and the export of a wide variety of tropical fruits, vegetables and other produce. These days, though, with the exception of kentia palm seeds, very little is exported from the island, with virtually all of its produce consumed by the locals and its increasing number of visitors. In fact, these days the island is almost totally reliant on its busy tourist industry. With no natural harbour, marinas or deep water jetty, there is no access by sea, although this is more than made up for with regular jet services from Australia and New Zealand.

Once on Norfolk, it doesn’t take visitors long to acclimatise and slow down to the gentle pace of island life. Visitors soon become totally absorbed in the history and the unique culture that can be seen and experienced everywhere – a world totally devoid of neon lights, pollution, cluttered billboards, fast food outlets, tall buildings and traffic jams.

Down in the old Kingston Township area, there is convict and early European settlement history everywhere. Tourists can spend days just wandering around taking in the old ruins and stories around the old gaol, the crank mill, hospital, lumber yard, soldiers’ barracks, government offices, the old Georgian-style residences, water mills, the salt house, churches, maritime buildings, museums and more. Built by convicts, some buildings have been restored while others lie in ruins, but each has its own story to tell.

Many of the accommodation options supply a vehicle as part of the tariff (if not, cars are relatively cheap to hire anyway), so getting around on the 70km or so of mostly sealed roads is not a problem. Before you travel too far, though, there are a few things you need to know…

Firstly, cows, as well as ducks and geese, wander freely almost everywhere and under local road rules, they have right of way. There is a maximum speed limit of 50km/h and the wearing of seat belts is not compulsory.

Pleasingly, no one uses their car’s horn and there are no traffic lights. There’s only one roundabout and drivers (and some passengers) observe the novel local custom of waving to every oncoming vehicle. It can all seem quite strange at first, but it doesn’t take long to get into the swing of life on the road, Norfolk-style.

Once out and about, visitors quickly find that across central regions of the island there are scenic hillsides and valleys, rain forests, thousands of majestic Norfolk pines, many farms and crops and quite a number of lovely island gardens. Approximately a third of the island has been set aside as National Park and reserves, and these abound in delightful walk and drive trails. Another bonus is that there are no snakes or poisonous spiders to worry about.

It is, however, around the island’s coastline that the dramatic beauty of the place is most noticeable. There are countless picturesque bays, beaches and headlands, sheer 100m-plus cliffs and a variety of coastal walking trails, which take in magnificent views from cliff-top lookouts, including the many small islets and rocky outcrops lying close to the main island shores.

Options are also available for scenic flights around and over the island and even out to sea to take in Norfolk’s smaller island neighbours – Nepean Island is just a kilometre offshore and Phillip Island is 7km away. The latter has majestic cliffs towering up to 300m straight out of the ocean. There is also the option of a boat trip out to Phillip Island to spend a day exploring on foot.

Apart from enjoying the spectacular local scenery, there are a wide variety of shows, progressive dinner tours around local island homes, breakfast walks and barbeques, cultural exhibitions, Bounty mutiny re-enactments, sunset fish fry dinners, garden tours, and a number of live theatre plays in various historic locations, all re-enacting parts of Norfolk’s colourful history. There is also a spooky ghost tour – the eerie lantern walk through the old cemetery is not for the faint-hearted. Participants will learn that Norfolk Island probably has more ghosts per square kilometre than anywhere else on earth.

In addition, there are deep sea fishing tours, glass-bottom boat coral viewing trips in the lovely Emily and Slaughter Bays, as well as swimming, scuba diving, snorkelling, surfing, windsurfing, sea kayaking and sailing. There is also a lovely scenic nine-hole golf course, a free mini-golf course, and certainly worth checking out is the Cyclorama, a wonderful 360-degree, walk-around panoramic painting depicting the story of Fletcher Christian’s mutiny on the Bounty.

With all this activity, a feed is definitely in order. Some accommodation options include all meals, whilst others have self-contained kitchen facilities. A couple of small local supermarkets will be able to supply most self-catering needs. Elsewhere there are bakeries, a pizza shop, several cafés and coffee shops, plenty of restaurants (some specialising in local and Tahitian dishes) as well as an RSL and a Leagues Club, both of which provide lunch and dinner meals.

Visitors should also try out ‘Bligh’s Revenge’ ale at the local brewery as well as free cellar door tastings at Norfolk Island Liqueurs and at the local winery.

Also, because Norfolk Island is outside Australia’s Customs boundaries, there is plenty of duty-free shopping. Shopaholics, in fact, have a ball on Norfolk, with many tax-free stores from which to choose.

A small dot in the south Pacific it may be, but Norfolk Island has so much to offer it keeps many visitors heading back to its shores time and time again. Whether you’re attracted to its friendly, relaxed lifestyle, its history or its natural beauty, Norfolk Island has put its bloody past well behind it and is most definitely a paradise once more.

KNOW BEFORE YOU GO

Most credit cards are accepted on the island. Australian currency is used and several banks and ATMs are available.

There is no public transport on the island. Taxis are available, but hire cars are the usual form of transport for most visitors. There are also no camping facilities on the island.

Norfolk Island (a territory of Australia) has its own postage stamps and postal service, customs and immigration laws – even its own Commonwealth Games team.

Internet access is available at several locations in the town centre.