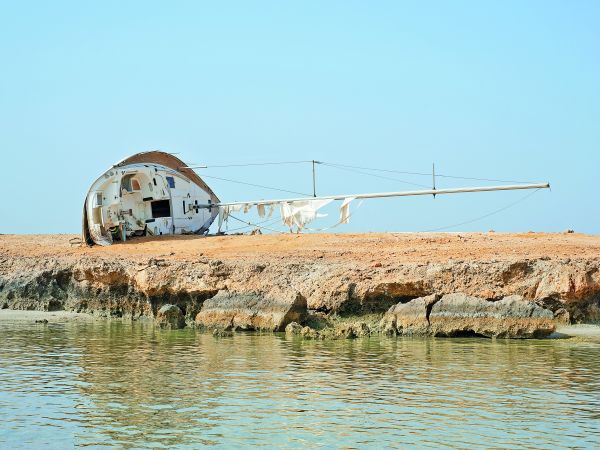 Always check the marine weather forecast prior to taking your boat out
As the cyclone season ramps up, Club Marine’s Peter Ryan draws on 30 years of experience to offer some storm preparation tips.

Blame it on the little girl. Due to La Niña, the Bureau of Meteorology is predicting a higher than average number of tropical cyclones for the entire Australian region until June 2011.

The term La Niña (Spanish for ‘the girl child’) refers to the shift to cooler water temperatures in the central and eastern Pacific Ocean. Basically, in Australia, Papua New Guinea and Indonesia, La Niña means wetter conditions are likely. No one who has seen the news coverage of the recent tragic floods in Queensland and Victoria would consider this news, except to add that, historically, La Niña also means there will be more tropical cyclones.

Despite all the advances in meteorology, however, no one can predict the exact location, frequency and intensity of the cyclones we will face this year. There are always a lot of unknowns about cyclones and storms. But we do know this: boat owners who suffer the least amount of damage are not just lucky, they’re prepared. With that in mind, we spoke with Peter Ryan, Club Marine’s National Underwriting Manager, and asked him to provide some tips and advice on storm preparation.

Ryan has been with Club Marine for almost 30 years. Beyond the work he has done salvaging, assessing and inspecting storm-affected boats, he has had the unenviable experience of being caught in a Pacific cyclone while sailing off the coast of Fiji. Ryan has also just returned from Thailand, where he received a refresher course in the critical importance of mooring lines. While crewing a Beneteau 447 in the King’s Cup regatta in Phuket, a freak monsoonal low created a large swell that rolled the yacht onto the beach and provided Ryan with three extra days of salvage work to add to his extensive Club Marine experience.

“It’s a terrible feeling to try and rescue a boat off a beach,” says Ryan. “I’m ready to offer any tips I can to help any boat owner avoid the same fate.”

But before we delve into particular scenarios and various storm preparation tips, Ryan wanted to remind Club Marine members of the most important rule of boating: “Always check the marine weather forecast prior to taking your boat out,” he cautions, adding: “This is the number one rule before you go out – no matter what.”

Given his recent experience in Thailand, Ryan holds some pretty strong views on the topic of docking lines. “Everybody with a boat needs to ensure their docking lines are of an adequate size,” he says. And then, they should get another, even stronger set.

“Remember to double-up,” he says. “Prepare an extra set of docking lines for the cyclone season and make sure your second set of ropes is of a higher breaking strain.”

Stressing the important difference between tying off on a normal day and tying off in preparation for a cyclone, Ryan says when tying off your boat, never depend on the same tie-up point. “Always attach a second set of lines to a different cleat or anchor point,” he advises. “If one of those anchor points fails, you don’t want two lines being useless.”

While you’re thinking about your lines, take a serious look at your cleats. There has been a bit of a growing fashion trend lately to make cleats small, which can undermine docking integrity when the waves hit. Ensure your cleats are properly attached and are of the proper size. If your bow cleats are too small, think about replacing them.

As most in the marine industry know, one of the biggest problems with ropes is chafing. During a cyclone, the motion of a boat can get violent; often the pitching bow of a boat works like a knife on an unprotected rope. So, protecting your lines from chafing with chafe guards is near the top of Ryan’s recommendation list. “Locate the chafe points on your boat and use proper chafe guards,” he says.

Of course, the best way to provide chafe protection is to use chains instead of ropes. According to Ryan, chains are almost always the best option. A chain line never chafes and it adds weight to the boat, which can make a huge difference when the wind whips up. And Ryan insists you can never put too many chains down. “Never leave any chain in the locker when a cyclone is coming,” he says. “Put down everything you’ve got.”

Increasingly, evidence suggests that, in many areas, swing moorings are an unsatisfactory means of securing a boat during a major storm. According to Ryan, when swing moorings are unserviced, too small or fixed poorly in shallow areas, they just won’t be up to the job. “Put it this way, Club Marine has seen a lot of cases in which swing moorings have come up,” he says.

Ryan believes there are three things that every boat owner should do if they’re on a swing mooring. Number one: check your insurance policy. Number two: ensure that your mooring is serviced every year. And number three: make sure your mooring is of an adequate size for your boat.

“You’ve got to make sure your mooring is serviced on an annual basis,” he explains. But because the mooring contractor usually lifts the mooring block during service, it takes a while – some say up to three months – for it to settle again. Obviously, this means a service can’t be done right before cyclone season. “A good time to service your mooring is actually right after a cyclone so that it has plenty of time to bed down before the next cyclone season,” he says. “Three months either side of the cyclone season, I would think.”

To find out if your swing mooring is right for your boat, the best thing to do is talk to a local mooring contractor who knows the conditions in the area and your boat’s requirements. “Still,” says Ryan, “it would be prudent to ensure that the mooring is in excess of the requirements.”

One last thing about swing moorings: sometimes you can do everything right and your boat can still get seriously damaged. “You need to remember that not everybody does the right thing,” Ryan explains. “What we’ve seen is that it’s often the other guy’s boat that breaks away from its mooring and drifts about the harbour, colliding into and damaging even the best-prepared boats.” Prepare for the worst and hope your neighbouring boat owners are doing the same.

Anchoring your boat in a safe, remote harbour is one way you might reduce the chance of other boats breaking loose and damaging yours, provided you take a few precautions. First off, be sure to let the authorities know of your position and your intentions. “In the chaos that follows a storm, this is the sort of information that will help marine assessors and salvage operators, not to mention your family and friends, who are worried about you and your boat,” says Ryan.

Locate a good site to anchor, with protection from the forecasted storm. Avoid rocky-bottomed areas, and rocks in general. If your boat is blown ashore, almost anything is better than having it come in contact with rocks. Look for a sandy sea bottom or soft mud.

Next, be sure the size of your anchor and ground tackle is of adequate dimensions and design for your boat. As Ryan says: “Use everything you’ve got.” If you are planning to anchor during a storm, you should never leave anything in the anchor well. “If possible, carry a second anchor and use it,” he says. “And remember to double-up your mooring attachments to different points.”

If you have the option, you need to determine if you or others should stay on board your boat during a cyclone. “One of the most dangerous things you can do is stay on your boat,” Ryan says. “Think about your personal safety and consider the limits of what you can actually do to protect your boat when the winds are blowing at 100km/h.”

The last tip for anchoring during a storm harkens back to Ryan’s aforementioned number one rule of boating: “If you are anchoring overnight, check the weather forecast before you leave, every morning and every night – no matter what.”

If a storm is predicted in your area, it’s time to spring into action and ramp up your preparations. Owners of sailboats need to fixate on eliminating drag. “The less drag you have, the less chance you have of pulling your mooring lines or pulling the mooring off the bottom,” says Ryan.

Any drag will increase the pull on the moorings, so remove your sails, your roller furling jib or headsails. Remove your mainsails from the boom and any sail covers and pull the halyards through to reduce windage.

Another suggestion is to take all the loose sails off the boat after they’re removed. Usually, sailboat owners strip the sail and canvas and stuff it in the cabin. But, if the boat takes on water, it’s a real chore getting those sails out of the cabin. It’s an extra precaution, of course, but worth thinking about.

Anything that can blow off your boat should be removed. All your electronics, of course, but also biminis, deck gear, cushions, eskies, fishing equipment and barbeques. It doesn’t matter how secure these things seem, the force of a cyclone has a way of destroying the things that stay in place, or worse, blowing your stuff off your boat and smashing it into a neighbouring vessel. “Look out for the other guy,” says Ryan, “and hope he’s looking out for you.”

In the galley, clear out all elevated cabinets where doors might open and spill their contents. Tape the cabinet doors shut, but don’t expect that to necessarily work. Put all breakables in boxes.

Remove all heavy objects that will force doors open during extreme rolling. Remove and secure all loose items and appliances like televisions, lamps and knickknacks and store on the cabin floor.

Clean out the perishables from the refrigerator and remove any glass bottles or jars that might slide around and break. Latch the refrigerator door – and all other doors and hatches – securely. Close and plug all sink drains. Close the sea cocks for the heads. Disconnect and stow power cords.

Ryan recommends three vital information resources for boat owners preparing for a storm: the Bureau of Meteorology website, your local maritime authority or council and, best of all, your fellow boat owners in the area.

“The Bureau of Meteorology website (www.bom.gov.au) gives warning services, up-to-date forecasts on imminent cyclones and safety tips,” Ryan says. “If you have access to the internet, this is a must-see site.” Secondly, check with the local marine authority or council. “This is where you’ll get information on the local cyclone procedures or protocols,” says Ryan.

Most importantly, speak with locals. “Seek out the locals or marina staff and ask them what has happened in years past,” says Ryan. “Or just chat with people and find out where the best protected areas are.” Some moorings are very open and in shallow waters, while others will offer more protection from wind and waves. Most people have an opinion; ask around.

As we pointed out, no one can predict the exact location, frequency and intensity of the cyclones we will face this year. But by working with a preparation plan and learning all you can to protect your vessel, you may be able to tilt the odds in your favour to ensure you are back on the water as soon as the storms have passed.