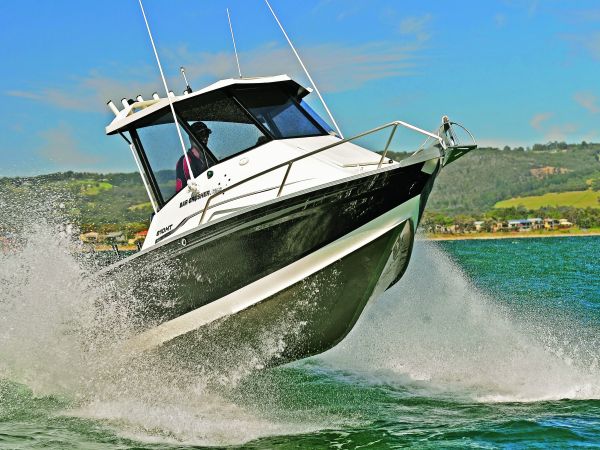 Bar Crusher’s 610HT is a tough boat for tough conditions.

If you’ve ever been caught out there in a following sea, you know that sooner or later you’ll start running down the face of a wave and when that happens you need to know that your boat is going to react predictably and steer where it’s pointed. You need to be confident that if you run into the back of a wave, the boat won’t bury itself or be forced sideways into the trough and broach, because that’s when you’re in real trouble. That applies equally whether you’re out in Port Phillip Bay in 1.5m waves, off Port Stephens in 3 or 4 metres, up at the tip of Cape York or at the bottom of Tasmania.

That’s something that the folks at innovative Victorian boatbuilder, Bar Crusher, understand only too well. They’ve gone to great lengths to design and build a range of fishing boats that perform in tough conditions. They know that people using these boats often go out 50km and more offshore chasing the big ones and they’ve incorporated some really innovative features into their boats with the aim of making them practical, comfortable, and safer.

Bar Crusher builds high performance plate aluminium fishing boats from 5.35m to 7.8m. The range includes open runabouts, cuddies, walk-arounds and hardtops. We recently had the opportunity to take a close look at the Bar Crusher 610HT, the smallest of its hardtop range, officially released at the Melbourne Boat Show last year.

With an overall length of 6.10m and a 2.25 beam, she comes complete as a boat/motor/trailer package, kitted out ready to go fishing. Rated to take up to a 150hp engine, our test boat was fitted with a four-stroke, Suzuki 140hp outboard, which was quiet, had plenty of get up and go and was fitted with hydraulic steering, which is a standard feature on all Bar Crushers.

On board, the cockpit is unencumbered, with plenty of room for fishing and moving around and a full-beam, fold-down seat along the transom folds out of the way when not in use. Dual batteries and the fuel filter/water separator are located under the coaming, well protected yet easy to access, while a live bait tank built into the transom can be optionally plumbed. A foldout, heavy-duty dive/swim ladder and a burly pot/ muncher on the swim platform is standard fare.

The 140lt fuel tank built into the cockpit sole is close to the centre of gravity so, no matter how much fuel is on board, the balance of the boat is unaffected. The filler is on top, feeding directly into the tank, which means there are no hoses or clamps to possibly leak and little to go wrong. There’s also a kill tank built into the floor and a bilge sump further aft has a plumbed-in bilge pump as standard. A seawater wash-down comes with a curly hose long enough to reach all over the boat and rod holders built into the cockpit coaming, rocket launchers on the hardtop and side pockets running the full length of the cockpit provide plenty of storage for rods, gaffs, nets and the like.

Further forward, comfortable Reelax seats for the skipper and companion rotate 360 degrees so that you can sit facing aft while fishing or trolling and slide-out tackle drawers are fitted under both seat pedestals.

Protected from the elements by the three-sided hardtop with toughened glass windscreen, the skipper has unobstructed 360-degree views whether seated or standing at the helm. The dash is non-glare, well laid-out and fully-enclosed, with access from a panel at the rear to get to the wiring. There’s plenty of room for engine gauges, an array of rocker switches, radio/s, and your choice of electronics package. Our test boat was being fitted with a GPS/plotter/sounder with a 9" screen, but there’s ample room here for a 12" screen or even two separate, smaller screens. The stylish sports wheel feels comfortable in hand, with the engine controls located to the skipper’s right.

Bar Crusher uses a Waveslicer hull design throughout its range, providing a smoother ride in choppy conditions. They feature a moderately deep-V entry, with a variable deadrise to around 20 degrees at the transom and no strakes. Bar Crusher believes that eliminating strakes along the hull reduce spounding and minimises turbulence at the prop, which, under certain conditions, causes cavitation. This translates to a super-responsive hull that manoeuvres beautifully and turns tight and fast, resulting in added safety, especially when negotiating bar crossings.

We tested out her manoeuvrability on a day that was blowing 30kt with 1.5 metre short, sharp waves on Port Phillip Bay. We pushed her hard and fast in all directions and running into the sea we had her airborne a number of times, yet she rode superbly. We had her twisting and turning and more than once threw her into full-lock turns at nearly 30kt (55km/h) and she turned almost in her own length. While we don’t recommend you try this at home, it’s nice to know that this is a forgiving boat, sure-footed and predictable.

The Suzuki DF140 four-stroke is rated to 6000rpm and with this combination, depending on conditions; you could expect a top speed around 36kt (67km/h). Cruising rpm is about 4000, which gave us 21kt (40km/h). Reports back from fishers using this combo indicate that they can head out to the Shelf, around 50km offshore at Portland (Vic), troll for five or six hours and then cruise back using about 100lt of fuel for the day.

While getting to your fishing grounds fast and staying there longer is important, what’s also important is that your fishing platform is stable at rest and, with a deep-V, that’s not always the case. Bar Crusher has gone a long way towards eliminating the problem by incorporating its own trademarked Quickflow Water Ballast Technology.

A cavity in the bottom of the hull, running along the full length of the keel and open at the transom, fills with water when the boat is at rest, creating ballast and lowering the chines into the water. The result is a surprising level of stability. As the boat accelerates forward, the water is jettisoned from the hull and, in the process, allows the bow to lift, providing a smooth and fast transition onto the plane.

We tested out the system on the day and the difference in stability with the system on and off was amazing. We were able to try it with the system off because our test boat was fitted with an optional ballast flap that closes the opening at the press of a button while underway. This feature comes in handy for those times when you don’t want the water ballast to automatically activate so the boat remains more buoyant. Situations like if you were running the boat up on to a beach, launching at a shallow ramp or navigating shoals spring to mind.

The cuddy cabin forward is fitted out with seating and an optional infill drops in converting the seats to a large double berth. Storage is provided for beneath the seats and in full-length side pockets.

A large hatch in the cabin roof is wide enough to comfortably get your shoulders through, facilitating access to the anchor gear on the bow. Our test boat was fitted with a SARCA (Sand And Reef Combination Anchor) unit on a bowsprit and roller. A Stressfree anchor winch was housed in a well, with remote anchor controls at the helm.

Launching and retrieving single-handed is a cinch, thanks to a clever innovation called Bar Catch, fitted to all Bar Crusher trailers. At the ramp, the boat is backed into the water and the winch strap released, allowing the boat to slide back so that it’s retained by the Bar Catch. An elastic strap on the Bar Catch is then relocated to the ‘Launch’ position. The skipper powers the boat forward slightly and the Bar Catch springs open, allowing the boat to slide off the trailer. To retrieve, the skipper drives the boat forward onto the trailer and with the elastic strap relocated to the ‘Retrieve’ position, a hook eye on the bow of the boat rides over the Bar Catch and clicks into position, retaining the boat. In operation, it really is as simple as that.

Overall, this is an impressive package, produced by an Australian manufacturer employing Australians to build world quality boats.

The 610HT is a good performer, fully kitted out with lots of innovation and small details that go a long way to improving the fishing experience. It boasts wide side decks so the crew can spread out and comfortably sit around the sides while fishing, coamings at the right height for resting your thighs against, with room to get your toes under. And there are rails and hand holds in all the right places so crew can safely move about while underway. LED lighting is standard throughout.

And that’s all before we even touch on build quality and engineering, which is equally impressive. Bar Crusher uses a high-tensile plate aluminium construction, with a solid sub-floor frame, boxed and triangulated in all directions, and a welded-in floor. This supports the entire hull structure so there is no need for internal ribs, which means a nice, clean interior and super-strong hull, with almost zero flex.

With the boat/motor/trailer package weighing in dry at 1580kg, there’s plenty of choice in terms of tow vehicle and the whole thing is almost turnkey. Simply add your electronics of choice and head off into the wild blue yonder on that eternal quest for that elusive big one.