Quiet as she goes 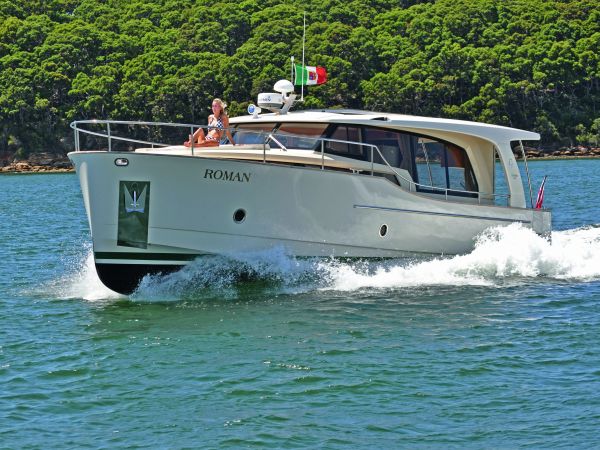 Classic styling conceals modern hybrid technology below the decks of the Greenline 40.
Greenline’s new 40 hybrid is a clean, green and quiet alternative for those looking for a different cruising experience.

It was weird, peaceful and wonderful all at once as we eased out of the marina berth in almost total silence. There was not even the underwater burbling of a muffled exhaust to disturb the tranquillity of a sunny morning; just a smooth, almost ghostly movement as twin electric motors gave perfect control to move the Greenline 40 out into open waters.

We did have thrusters fore and aft for even more precise manoeuvering if we’d needed them, but an experienced hand on the twin shift-throttle levers had no trouble in using the electrics and twin shaft-drive props to slide out of the berth, rotate the boat in not much more than its own length and glide out into open water.

There are so many innovative features on this 12m cruiser; it’s a challenge to know where to start. It has a unique low-drag hull design that has been patented by Greenline with the title of Super displacement. It also has an appealing mix of traditional and contemporary lines, as well as a very practical day-cruiser layout that’s open-plan and all-on-one-level, including comfortable overnight accommodations. And, of course, it has ‘green’ credentials that are very appealing to some buyers these days.

Another aspect of the Greenline, according to importers, North South Yachting, is its appeal to the sail crowd who, for whatever reason, no longer wish to tackle the physical demands of yachting, but who still want to retain the engine-noise-free joys of cruising. Families with young children should also find the one-level layout and extra safety of the wide and enclosed side-decks very handy, while skippers who like to be in the middle of the action will appreciate the helm’s placement in the saloon.

Putting the environmental aspect to one side for just a moment, the Greenline 40 is an appealing craft in a conventional sense and can be specified with a single 74hp/55kW diesel for comfortable and economical cruising. Price with this engine starts at a very competitive $385,000. Other power options range up to twin 221hp/165kW diesels if you want to cruise faster at speeds up to 22 knots (40km/h) or so. There is a vast range of options available as well, many of which had been included in our test vessel, such as the ‘Double Hybrid’ upgrade. This starts with twin 150hp/110kW diesels and adds a pair of 7kW electric motors, automatic charger/inverter systems and two lithium-polymer batteries that deliver 240Ah at 48v for a total of 22kWh.

Also included was a Solar Pack that had six photovoltaic panels integrated into the cabin roof delivering 1.3kW at 48v into the automated battery charging system. An inverter provides 240v throughout the Greenline, so that domestic appliances can be used. Including all the options, our test cruiser came out at $577,853, which is good value, even apart from the environmental benefits, economical cruising and near-silent operational appeal that the Greenline offers.

Another feature of the 40 is its engagingly practical layout. The saloon and helm position are on one level, which provides the skipper, crew and guests with one large, unobstructed space for social interaction. The L-shaped galley is at the port aft end of the saloon and has a workbench/bar that faces into the aft cockpit, so the cook-of-the-moment can interact with occupants of both areas.

The saloon has large tinted windows all round and a matching retractable sunroof up front for a very light and welcoming atmosphere. In front of the galley, an L-shaped lounge with high/low dining/coffee table is opposite a beautifully crafted cabinet, from which a flat panel TV rises on demand. Across from the galley to starboard is a large fridge/freezer aft of a glass-fronted display cabinet, with recesses for safely securing drinking glasses. Storage spaces are provided everywhere in cupboards and drawers around the galley, and elsewhere in the saloon, including under seats.

Floor space in the saloon is generous, while the overall design still manages to accommodate broad side decks, with very high bulwarks rimmed by guard rails to make passage to the foredeck both relaxed and safe. A sliding door beside the helm allows the skipper to quickly move out and secure mooring lines – single-handed running of the boat would not be a problem. A power anchor winch can be operated from the helm or with controls on the foredeck, and hardware, such as fairleads, cleats and bollards are correctly sized and intelligently positioned around the boat.

The transom is rather ingenious as the whole central panel electrically lowers to form a boarding platform. That keeps the cockpit very secure when the transom is up, and keeps the back of the boat uncluttered and easy to back all the way into marina pens. With the transom down, the cockpit is opened right up as the inside of the transom then blends with the cockpit sole, both beautifully finished in teak planking on our test boat.

The cockpit has quarter seats in the corners and under the floor are huge stowage areas. There’s even provision for an emergency tiller to be deployed. The saloon roof extends over the cockpit to keep it sheltered, and provides extra space for integrated solar panels to be fitted. On either side of the cockpit are swing-open entry ports to make it easy to board the Greenline when it’s alongside a jetty or marina walkway.

A large, tinted-glass panel swings down on gas struts to close off the cockpit from the galley, with access via a sliding door to starboard.

At the front of the saloon a central set of steps leads down to a guest cabin to port. This was set up with twin berths that quickly convert to a double if required, while to starboard is the bathroom, with a basin, stowage areas, macerator toilet and a separate shower stall. The bathroom has entry doors from the companionway and directly from the generously-sized forward owner’s stateroom, which can also be set up as either a twin or double bed arrangement. The cabins have their own TVs, hanging and other storage, with good natural light beaming in from windows, portholes and hatches.

The fit and finish throughout the Greenline are top quality, and the mix of timbers, veneers, fabrics and carpets is easy on the eye. A pair of 16,000 btu air-con units provides control of temperature and humidity.

Even with the hybrid power, the helm is encouragingly straight forward. It combines gauges and displays for both diesel and electric motors, with navigation systems and operational controls in a comprehensive, but easily understood layout. Electronics include a Garmin GPSMAP 512 display, incorporating chart and radar displays and depth data. There’s a Garmin VHF radio and GHP-10 hydraulic autopilot system, too.

It’s a comfortable helm, with a well-upholstered bench seat that’s wide enough for two, and with all the displays in good line-of-sight and controls within easy reach. A great feature (and a good example of the thoughtfulness throughout the boat) is that an angled footrest is part of a panel that pivots down to provide a higher platform on which to stand when underway. Visibility is good in all directions.

Driving the Greenline 40 is a breeze. The wheel has a light touch and is not too direct so that the boat is not overly sensitive and requires no more than a relaxed hand most of the time. The low-drag Super displacement hull for missea worthy and offers a soft ride; essentially it’s a streamlined sailing-yacht-style hull shape, with five-blade props partially enclosed in tunnels. A pair of stabiliser fins is a unique feature of the hull, acting to dampen any rolling motion both when underway and at anchor. A straight stem helps slice through any chop or swell, whilst flared forward sections displace water to each side and keep the Greenline running with a minimum of spray reaching the decks.

For both the skipper and the crew though, the most impressive aspect of the boat is its quietness. It’s virtually silent under electric power, and that’s good enough for six knots (11km/h), with a range of 20nm (37km) at about four knots (7.5km/h). At three knots (5.5km/h), the solar panels are producing enough power to run the electric motors, so there is no draw on the batteries. The panels do not need direct sunlight to produce power either – just light, and on an overcast day they still generate electricity.

Even with the diesels running at a typical cruise of around 10 knots (18.5km/h) they are amongst the smoothest and quietest I’ve ever come across. Noise levels increase with speed, of course. While we saw 16.7 knots (31km/h) on our test run, interior noise levels remained remarkably low.

The hybrid power system works with the diesels coupled to forward-neutral-reverse gearboxes that are linked, via hydraulically-operated clutches, to the electric motors. A ‘Protected Hybrid’ management system and an electronic management module make it very simple and easy to switch from diesel to electric power. With either power source, a standard dual-lever shift/throttle control gives are assuringly familiar means to operate the boat.

When running under diesel power, the electric motors become a pair of 5kW generators, which feed power back into the batteries. Two large hatches in the floor of the saloon give excellent access to the engines so that routine checks are no hassle. The engineroom was as clean as a whistle and all the engineering looked good, with double-clamped hoses and well secured wiring and hoses.

Another hatch beneath the helm opened into the ‘electric brains’ of the boat, where large looms of wiring were neatly organised for the controls that managed the charging and power distribution circuits. The bank of lead-acid batteries for the diesels was in there, too, while the lithium power cells for the electric motor were lower down in the centre of the hull for optimum weight distribution. It all looked very impressive.

Yet another example of innovation and technological progress from Greenline is its recently introduced ‘GreenPad’. This is software that can be downloaded into an Apple iPad and used with a wireless connection to a ‘GreenBox’ installed in the engineroom. The system displays on the iPad an extensive array of data covering just about every aspect of the boat’s systems as well as navigation and weather information. It adds even further to both the excitement and convenience of owning a Greenline 40 Hybrid, and don’t forget there is the Greenline 33, if you want all these features in a slightly smaller package.

If you’ve not heard of Greenline before, rest assured that the company has a strong bloodline and a proven record of innovation and quality. In 1983 brothers Japec and Jernej Jakopin founded their J&J design studio with the Elan 31 yacht that won its class in the 1985 World Championships. More than 1000 Elans were subsequently built and it became the most popular charter yacht in the Adriatic.

In 1989, the brothers established the Seaway company and began to design and build their own boats as well as continuing to design for other leading builders around the world, including Bavaria and, more recently, Sea Ray.

In September 2009, the Greenline 33 was introduced and sold over 200 units around the world (including seven so far in Australia), and in 2011 the larger-sister Greenline 40 was released. It’s an impressive track record, and includes the establishment of a state-of-the-art facility in Puconci, Slovenia where the Greenlines are now built.