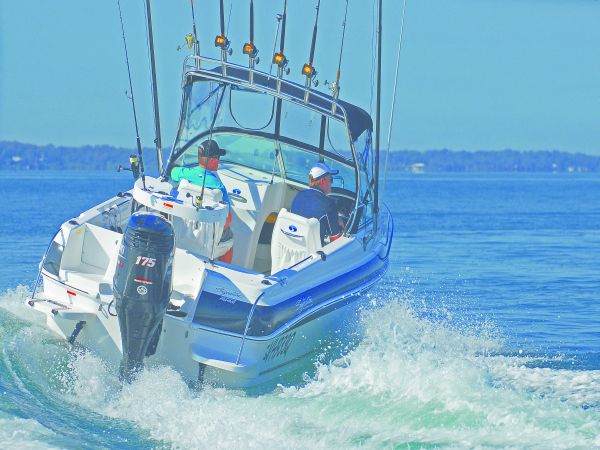 With its new Signature 575RF, The Haines Group is giving hardcore fishos even more of what they want …

When tough times beset the Australian boat building industry, many set the jib and laid back on the tiller to ride out the lull, hoping in earnest for a change of fortune.

Inevitably, in this sort of climate R&D sits on the backburner, relegated to the too hard and too expensive baskets. Instead, manufacturers make do with what they already have, perhaps redressing the odd existing model with a marginally different fit-out. It’s simply the safest tack when business is slow.

The Haines Group, however, has plotted a different course, finding the lull in boat manufacturing in this country is, in fact, the perfect time to get back to the drawing board and plan and build some new models for the better times to come. The firm says it’s also detected a building momentum for fishing-orientated boats, especially those that ply offshore waters.

Out of this flurry of behind-the-scenes activity comes the new Signature 575RF – a fishing platform built on Signature’s Gen7 hull, which, in itself, underlines how The Haines Group is doing anything but sitting on its laurels.

PLEASED TO MEET YOU

Settled on its trailer on the hard stand, the initial perception is that the 575RF’s keel line has been sharpened. It has, but only by a small degree. The real reason behind the new look is the addition of a sneeze guard forward of the planing plank. This rebate in the keel line is much like a hook and its purpose is to break the air pressure enveloping the forward end of the planing plank where spray is usually generated, before it takes flight and ends up on the windscreen. The lowering of this pocket of higher pressure is said to allow the spray to settle, resulting – claims Signature – in a dryer ride.

The hull has retained its variable deadrise of 21 through to 33 degrees – it’s a design that has stood many a Signature model in good stead over the years.

The outer bottom edges of the hull at the stern have also had a makeover, and now appear with a slight downturn. Signature says this creates more water pressure at a lower speed, assisting the boat to get onto the plane more easily and then maintain that plane at a lower speed. In terms of economy, that can only spell good news at the fuel pump.

The curls at the bottom end of the hull to promote transom lift are further complemented by a set of trim tabs, the operating switches for which are installed on the brow in front of where the skipper’s right arm rests when it’s not operating the throttle; you can’t get more sensible than that.

The two boarding platforms off the transom are small, but serviceable; one has a telescopic fold-down stainless-steel ladder rebated into its top.

These platforms are positioned at an ideal height, as they’re at water level when one or two people move to the aft of the cockpit. A good-sized transom door will allow big fish to be slid over the platform effortlessly and, with slightly more effort, through the door aperture and onto the deck. Sashimi, anyone?

In keeping with the offshore trend, the 575RF has an incredibly practical cockpit – the workable area is excellent.

The rear lounge isn’t removable, rather it drops down rapidly when the boredom of game fishing is shattered by a screaming drag ratchet and the scarpering of crew taking their positions across the stern. The fold-out legs tuck away and the seat base is unobtrusive when dropped on its hinges. A net pocket across the bottom of the base becomes a serviceable tackle and line stowage area when the seat is folded.

A high bait rigging station, also plumbed with water at the drainable sink, makes life easy for those on the bait needles. The tap folds away inside the sink bowl and the closed lid doubles as a cutting board. Another cutting board is hinged next to it and a shallow tray underneath secures hooks, traces and other potentially dangerous items.

Four rod holders are rebated into the table top, along with a shielded scabbard for a couple of knives. This station is optional – for $1000 it represents good value and it puts everything at your fingertips. Many will appreciate the pressurised water on demand, negating the need to stoop and hunt for deck hoses.

A livebait tank recessed into the starboard transom corner is handy to the bait rigging station, the latter removed by simply lifting the two supporting posts out of their bases in the transom after disconnecting the plumbing fittings.

Hidden under the transom bulkhead is a removable skirt, behind which a pair of batteries are secured. The trim tab pump is fixed over a small bilge, in which an auto-float switched pump is installed.

The concept of a mini bilge is interesting, in that 50lt of water in a full-width bilge may not float the switch on the pump, but 5lt in a small hole will. The bottom line is less weight to carry and less sloshing water over the feet on a cold day.

The afore-mentioned batteries have their switches up under the coaming. Rather than a large dial-type switch, the manufacturer has used single switches on a single bank, with their purpose of operation clearly understandable. This is only a small thing, but it’s quite meaningful for those having problems getting their head around ‘Bat 1, Bat 2, House Battery’ and what each position does or does not perform. Their accessibility negates the need to crawl around under the transom bulkhead to operate the switch gear.

The cockpit liner in this boat is moulded in one with the deck, while the hull is laid up with a matrix system of hollow stringers and foam-filled cross sections. The top liner is then glued to the hull mould, then the void under the deck is filled with foam for flotation. This turns any voids in the hull into serviceable ice boxes – the killtank in the deck between the two front seats is 180lt in volume. Its forward position is a good idea, as when the fish are coming over the side accessing the killtank doesn’t interfere with those doing the fishing.

The liner has the typical apertures in the side, in which optional in-fills have been installed. These two in-fills feature tackle drawers behind hatches, rebated audio speakers and storage pockets. The liner next to the skipper and passenger is a separate unit with more stowage. The Haines Group has always been big on this type of installation. Nooks and crannies can be found all over the place, where gear can be stashed away, usually out of the elements. It’s a practical ploy for a fishing boat and The Haines Group has not disappointed us with the 575RF. It all comes from having good, practical fisherman design good, practical fishing boats.

While the boat is big on practicality it’s also comfortable throughout. The two seats at the helm bulkhead are true bucket items and when sitting in one the sides of the bottom cushion grab you around the thighs. There won’t be too much slip-sliding away in rough seas while sitting in one of these units.

A deep trinket box in front of the passenger features a raised lip on its base so water is kept at bay, while in front of the skipper a high brow on the dash hosts a pair of electronic instruments for engine functionality. Below that a large Garmin flatscreen depth sounder/chartplotter is installed.

Of note was the fitment of an Autotether at the helm. This unit is wired to the ignition and the skipper and crew can wear a remote, water-activated switch that, when wet, will shut off the outboard motor. A press of a button on the head unit and the engine fires up again should you need to perform a rescue. It’s an interesting concept; I can’t help but wonder if the authorities will deem such systems mandatory before too long.

In true offshore fashion, the 575RF sports a sturdy rocket launcher and a nice, taut set of clears. Of note regarding the clears was how the bottom hem was secured. No more press studs to corrode and break and gaps to allow water ingress into the helm area. Rather, the manufacturer has gone to the trouble of sourcing an alloy sail track extrusion, which fits into the top of the windscreen frame. As far as strength and waterproofing goes, it probably can’t get any better than this when working with canvas, clears and windscreens.

Stepping down into the small cabin there’s an infill covering a portable toilet. At a squeeze, two medium-size adults could curl up in here, but in reality it would be better used to store tackle and gear out of the weather. The extra space in the cockpit had to come from somewhere, and that place was here.

Access through the windscreen is easy and should you be pulling the ground tackle by hand you will be right over the anchor well once the cabin roof hatch is folded back to one side.

The anchor well is designed to have an electric drum winch installed, but the ledge it bolts to may be removed should you decide you’d rather do the hard yakka under your own steam.

The only disappointing aspect of this review was the weather. A glassed-out Moreton Bay and outside offshore waters does little to bring out any blemishes that one might find in a hull; it was oily calm.

With Suzuki’s 175hp four-stroke on the transom, the engine management system told us the 220lt of fuel in the under-deck tank would get us a long way, indeed. Bringing the boat to an offshore lure troll speed of 9.5km/h, the motor was ticking over at 1700rpm and consuming 4.7lt/hr. That equates to 0.5lt to the kilometre.

Testing its slow plane capabilities we got the hull to lay down at 2700rpm, at which point we were travelling at 14.5km/h. The Suzuki was still only using a miserly 4.9lt/hr, which would give us 0.9lt per kilometre range.

The 575RF settled into a comfortable cruise speed of 39.7km/h with the motor ticking over at 3800rpm, where fuel consumption jumped to a still bearable 21.1lt/hr, giving a range of 0.5lt to the kilometre. At WOT the motor wound out to 5700rpm, by which time we were clipping over the glass at 66.5km/h and consuming 61.4lt/hr, which equated to 0.9lt to the kilometre.

Everything about those figures was good and with just 11 hours on the donk the Suzuki still had plenty of loosening up to do.

The only blemish we found was not in the boat, but with the steering that was bolted to it. The Seastar hydraulic pump or ram had a bleeding valve that made it atypically ‘notchy’ and the torque excessive from time to time. The steering wheel was rotating off alignment due to this. It is the first time this tester has found any issues with this brand of steering so we’ll put it down to a ‘one off’.

This boat will win plenty of favour in serious offshore fishing circles. It might not be a 100 per cent family-orientated boat, but it was never intended to be. However, those who do, indeed, take the kids along won’t find too much to complain about; in fact mum and dad will appreciate the high coamings and the added security they provide, as they will the Autotether feature.

A heap of power for effortless holeshot, a level of handling (other than the steering) that will no doubt make light work of the nastiest of bar crossings, and a variety of other creature comforts make this boat one to investigate further. Just pick some lousy weather; we doubt it will disappoint.