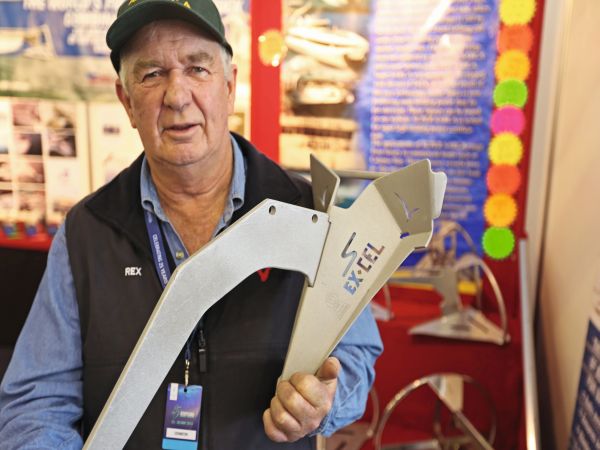 Whatever the seabed, Anchor Right has an anchor to help most vessels stay put.

Some 20 years ago, a boating incident that nearly cost lives inspired Rex Francis to focus his efforts on designing a better anchor.

“Back in the day you had one anchor for sand, one for mud, one for reef and so on,” he recalls. “Where we fished, you only used a wire anchor so if it got stuck in the rocks it would straighten and come out. On one fishing trip, we were anchored up and fishing and before we knew it, the water was lumpy and the wind was getting up. Next thing I know, the boat was heading towards these rocks. I went to start the boat, but I panicked and flooded the engine … I was already bracing myself to hit the rocks and my wife and kids were onboard. It frightened the living hell out of me. I managed to get the engine to fire and I pushed the throttle down and just went.

“We had trouble with the anchors holding in sand or mud. And we didn’t know what was down there, so we’d change anchors all the time. Anchoring was a nongoing dangerous, confusing problem… it got to the point that I was going to give boating away. And after that incident, I decided to design something that would work in all types of seabed.”

Twenty years ago, Francis launched the ‘Sand and Reef Combination Anchor’ (SARCA), the first combination anchor on the market. It incorporated an automatic reset trip release, another world-first.

“When we first started developing the anchor, we lent the first anchors out to charter boats at Westernport (Victoria),” he says, “When the guys pulled them up they were tearing up a lot of the bottom. It made an absolute mess, because they’d come up full of mud.”

It was back to the drawing board to redevelop it. “We turned the fluke around, changing it from a concave design to a convex one, and found it left the mud behind.” And so, after six years of development, the final SARCA design was found.

One of the challenges an inventor faces is coming up with a system to test the invention. Testing the holding power of an anchor isn’t as straightforward as it may seem, with variables such as tide, wave height, wind, and seabed type all influencing the outcome.

“We designed a new machine for testing the anchor because previously you had to put it on a tugboat with a diver and an underwater camera, which cost about $16,000 a day,” says Francis. A new, affordable contraption was needed that would deliver measurable results under controlled, reproducible conditions, so Francis did just that – he invented the Tidal Anchor Test Skid (TATS).

The device eventually received the approval of the National Marine Safety Committee (NMSC). meaning Francis was able to test, and subsequently gain approval, for the super-high-holding-power rating on his anchor designs – a first for an Australian anchor manufacturer.

“With our TATS machine we could test for about $300 day,” says Francis. “It’s a fantastic bit of equipment to have – we were able to test and re-test and that allowed us to redevelop the SARCA anchor and even exceed the super-high-holding-power requirements. The result is our Super SARCA anchor, which we launched about four years ago.”

With the Super SARCA gaining traction on the market, boat builders and others in the industry turned to Francis for a new design. “We were asked whether we could design an anchor in a more generic style – but one that would fit into the bowsprit or the pulpit. So we designed the SARCA Excel. It works in sand, gravel, reef, mud – the whole lot, and it’ll fit into the pulpit or bowsprit and it has a super-high-holding-power rating.”

Anchor Right’s SARCA anchors are now widely deployed on privately owned boats and commercial vessels, with larger SARCAs anchoring vessels up to 300t. But Francis says it was hard work educating the industry and the public.

“When the SARCA came out it was a rarelooking breed. It’s a hoop-style anchor. People saw it on the front of a boat and said ‘What the hell is that thing?’ It was word of mouth mostly, lots of talking at boat shows, demonstrations …”

Perhaps the most convincing argument for using a SARCA lies in the accounts of it holding firm through some incredible blows, such as during the devastating 2004 tsunami. “There were three boats with our anchors on them in Phuket and none of them moved. These are the things that give us absolute satisfaction – if you think you’ve contributed to saving someone’s life … to me that’s worth gold.”

The message Francis sends to boaties is: why risk your life with the wrong anchor?

“Yachties travel round the world; their anchor is a pet project. He’s got to sleep on his anchor, he’s got to trust it – we’re doing extremely well on multihulls and yachts. Put one on your boat that’s not going to fold and bend up on you because you never know when you’re going to need it,” he advises.

Deploying and retrieving an anchor will always have an impact on the environment and keeping this to a minimum is important to Francis. When he turned the flukes around to convex, he found the SARCA didn’t disturb the seabed as much. “Plough designs literally plough a trench along the seabed until they have set. Both the Super SARCA and the Excel lay all the material back the way it was. There’s also less drag because they set quicker, so overall there’s less disturbance.”

The anchors are made from stainless steel or hot-dipped galvanised steel without any lead – another plus for the environment.

By definition, an anchor is a device that keeps an object in place. From experience, Francis can confirm an anchor can come in handy on land, too.

“Where we go fishing, you beach-launch the boat. People sometimes get their vehicle stuck on the beach and there’s nothing to winch off, so they grab their SARCA anchor from the boat, drop it in the sand, and winch their vehicle off that.”

Francis recognised the potential and came up with another device: the Portable Rescue Tree (PRT). “My brother had a brand-new 4WD with all the bits and pieces and we got stuck in a swamp. We were there all night. ‘So much for your 4WD – you have the winch, but we’ve got nothing to hook onto,’ I said, adding: ‘You know what you need, you need a portable tree’. He looked at me and said, ‘You’re bloody stupid’. Later, when we started making the SARCA anchors, I thought, there’s my portable tree!”

Francis is appreciative of how things are panning out, especially after the many trials and tribulations he’s encountered along the way. Ever the inventor, he’s always working on something, with the latest product to come out of Anchor Right’s Victorian factory launching just in time for this year’s Sanctuary Cove Boat Show. It’s an alloy version of the SARCA Excel, but with a removable shank that’s fed in from under the fluke, with two bolts to keep it in place.

“Before we started with the SARCA 20 years ago, there was no movement in anchor technology on the market. If you look around now you’ll see many versions that look very similar to Anchor Right’s anchors.

“We’ve inspired the industry and, as a result, people throughout the world now have better anchors,” he says proudly.