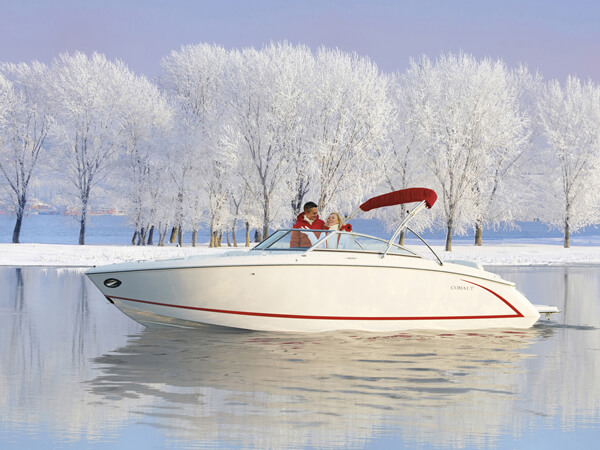 With winter upon us, help ensure your boat is ship-shape when it comes out of hibernation.

Now is the discontent of our winter. Boat engines and batteries lie in state while cabin windows sulk under the clutches of frost. The only sound is the relentless drip, drip, drip of condensation and the ghostly moan of a chill wind blowing no good through dormant rigging.

In candle-lit cottages across the nation, brave seafarers have succumbed to man flu, thermometers perched betwixt parched lips as chicken broth simmers on the stove. City motorists, meanwhile, plug in the engine-block warmer before ducking into the pub for a quick schnapps, lest the oil turn to treacle and the fuel fail to vaporise.

Winter in Australia is warmer than a San Franciscan summer if you’re to believe Mark Twain, and in reality it’s kids’ soccer, AFL and a wimpish disposition that prevents most of us from venturing outdoors year-round.

Certainly there is nothing in our climactic extremes that modern pleasurecraft can’t cope with, even in the icebox that is Canberra or the wilds of Tassie. So any talk about ‘winterising’ is more a euphemism for decommissioning your boat while you go skiing.

Nevertheless, in the global market we find ourselves in, there’s an increasing trend for people to buy boats in Europe, sail for the northern summer then fly home. Cruising boaties can also find themselves in far-flung lands of fire and ice.

Whatever the case, there are important steps to take to ensure your yacht, cruiser, or trailerboat emerges from hibernation in good shape. As the old saying goes, “look after your boat and your boat will look after you”, which means out of sight doesn’t mean out of mind …

Especially during colder months, mould is the first and foremost enemy of the idle vessel. Where moisture and condensation are harboured you can virtually shave the evil spores off cabin walls and cushions after a few weeks, so a little autumnal ‘spring’ cleaning goes a long way.

Valuables like electronics, wet-weather jackets, PFDs, inflatables and auxiliary outboards are all best stored in the garage. Cookware and cutlery can be run through the home dishwasher and it’s also a good chance to launder linen, towels and curtains.

Removing biminis and dodgers prevents them being damaged by winter storms. Similarly, yacht owners can use the downtime to wash their sails … being wary of commercial stain removers, particularly on spinnakers, and avoid using solvents on Mylar.

Take the time to clean and treat rust wherever it lurks – better now than wrestling corroded bolts and broken fittings in spring.

Once that’s done, start scrubbing. Chances are there’ll be some nasty hairs behind the head and a primeval slime in the bilge (a major source of foul odours), not to mention traces of fish guts and bait infused in cockpit carpets, shelves, wells and prep areas.

To encourage cabin circulation, leave the bunk mattresses upright and locker covers and cabin doors ajar. Close off the seacocks and get the various sumps as dry as possible. Then scatter some moisture absorbers (Damp Rid) throughout the interior.

A dehumidifier is a wise investment for marina-berthed boats, although fires are known to have been triggered by electrical faults on shore-powered 240V devices. You need to be sure that the dehumidifier is well secured and has adequate drainage.

Draining the water tanks is advisable but before doing so, flush the head copiously with fresh water. Rinse caked-on mud off the anchor and chain, then hose out the scuppers and cockpit drains.

If there’s a major risk of freezing, hot-water heaters can also be drained then filled with non-toxic antifreeze. They can rust internally or collect debris if left dry … and never turn them on while empty.

It pays to purge the holding tank as well – after which a splash of deodoriser should suffice, although in frost-prone regions some owners run non-toxic antifreeze through the intake lines, macerator and discharge hose.

When it comes to long-term fuel storage, particularly diesel, there’s a Catch 22. Popular wisdom holds that you should fill the tanks to limit the space where condensation collects, however there’s a risk of it going stale and being wasted.

Fuel companies have reportedly taken some of the old additives out of diesel to pass emission regulations, reducing shelf life to less than a few months in some cases. Leaving tanks empty, conversely, increases the opportunity for algal contamination. Treating the fuel with an after-market stabiliser is the best solution. After adding it, run the engine for around 10 minutes to circulate the stabiliser.

Portable outboard petrol tanks can sweat beneath boat covers so are best left in a shady corner of the shed. If you can disconnect the fuel line then do so; rubber eventually hardens when it continually cycles between hot and cold.

Mechanically, the average production vessel is an icon to over-engineering. Builders and parts suppliers do most of the winterisation at design stage as they never know where their products will end up – intercontinental warranty nightmares are the source of many a wakeful night.

By way of example, Australian round-theworld yachtsman and adventurer Tony Mowbray spent years trundling to the Antarctic and back in a stock-standard Cole 43 ocean racer and later a 60ft fibreglass production ketch designed more for Caribbean bareboating. In air temperatures of -17° and a sea temp lurking around 1°C, the onboard systems all worked faultlessly. During the depth of Patagonia’s winter, Mowbray would park his ketch and fly home for five months, leaving it encased in ice. His sole maintenance task was bleeding seawater out of the exhaust system and replacing it with antifreeze. That entailed shutting off the engine’s raw-water intake, disconnecting the hose, placing the end into a container of antifreeze, and then running the motor until the additive discharged through the exhaust.

Rarely is that necessary here, however one mechanic I spoke to knew of a grey-imported sterndrive runabout that was shipped in from America via Japan, where its problems began.

“A cracked exhaust manifold was the first sign of trouble,” the mechanic said. “I fixed that but it was still taking water in. I eventually found the block had cracked because it hadn’t been drained in the US, then it froze while in Japan.”

With the fine tolerances inside powerheads, even the slightest amount of internal ice can crack metal. Some enthusiasts like to ‘fog’ their engines, via the carburettor in older motors or a fuel additive in injected models. It leaves a film inside the block to prevent moisture build-up and corrosion. To further prevent moisture from seeping into the engine you can plug the exhaust and possibly the air inlet with tape or a wooden bung.

Gensets can be added to the maintenance list if you’re concerned about cold. Treat them the same as a diesel, although the metal components in the electrical motor do suffer from prolonged exposure to salty air.

Because marine air-conditioners use water to cool the condenser, manufacturers recommend forcing water out of the system with pressurised air or, better still, pump antifreeze through.

As is often the case, the best maintenance is use. On a calm winter’s day it’s worth running your motor and gear under load, if only for an hour or so. Idling the diesels in the pen is not ideal since carbon builds up.

On trailerable boats, check your gearbox oil to make sure there’s no residual water after hard usage over summer – if you don’t go to the extent of changing it, at least loosen the bottom screw and let a drip or two run out. You want to see good black oil.

Take the propeller off and check for stray fishing line around the shaft. Also, a dab of grease on the steering joints and cable will prevent subsequent seizure.

If there’s one component that faces the perfect storm over winter it’s the humble, hard-working battery.

First, there’s the cold. Lead-acid batteries prefer temperatures around 25°C and their capacity plummets as the mercury drops below 15. If left discharged, flooded batteries can freeze, and some electricians also advise against storing batteries directly on cold cement floors.

At the other extreme, electrolyte levels can boil dry with repeated charging and minimal usage. There’s the added threat of excessive gassing in lead-acid batteries, releasing hydrogen. It’s no coincidence that ice-monitoring stations in the Arctic use sealed batteries that hold the electrolyte in glass mats, preventing cracking and leakage. Gel batteries are better still, though dearer.

Winter is tough for solar power because shorter days and lower solar irradiance mean less generation. If your boat is small enough, disconnect the batteries and take them home to provide a trickle charge. Smart marine chargers are recommended over automotive units.

Aboard moored boats, life doesn’t stop for the battery just because the owner has. Rudder glands, transducers, skin fittings and deck fittings all tend to leak, causing the automatic pumps to run overtime and drain both battery and bilge.

Most boats are slipped and antifouled in early spring, which means they’re nearing the end of their maintenance cycle by winter. Physically check the bilge pumps are working – if the hoses, connections, or wiring look marginal then fix them. In climates where the ambient temperature inside the boat falls below freezing – uninsulated steel boats particularly – boaties add non-toxic antifreeze to the bilge to stop water turning to ice before the pump can dump it.

To protect hulls from ice build-up on near-frozen waterways, boaties often fit a propeller product known as Ice Eaters that ensures a constant water flow inside a marina pen. Not something we can really imagine …

If you’re giving your boat the cold shoulder for weeks on end, ask the dockmaster to check your lines and fenders every couple of weeks, and also keep an eye on the shore-power connection. A higher-tech alternative, which won’t get the man flu, is a monitoring system such as Yacht-Sentinel, which sends updates to your mobile to warn of possible electrical problems.

Real-time GPS tracking will help to recover your boat if stolen or warn via email and SMS that it has broken loose from its mooring. A proactive pre-winter mooring service will prevent that. Rescue groups seem to spend half their time plucking unloved boats from sandbanks due to poor mooring maintenance, with the runaways commonly causing damage to neighbouring boats or presenting a navigational hazard at night in shipping channels.

Smug in their beds, trailerable boat owners should also show some common sense. Rule one is don’t park under trees. Branches can come crashing down, as may ice that accumulates on limbs, while falling leaves will stain boat covers or block the transom drains. Naturally, store the hull with the bow raised so water will drain.

Make sure the cover is tight to prevent local wildlife taking squatter rights. And speaking of covers, trim down the motor to empty the lower unit and, once dry, seal it with a plastic bag.

Removing the trailer tyres at this point will eliminate flat spots from developing and protect them from the weather. Jack up the trailer by the axle to keep the trailer springs under load.

It’s not rocket science but at least you’ll be clear for take-off in the new season. Your final task is to pour a glass of medicinal scotch, stoke the log fire, and count the days till spring.