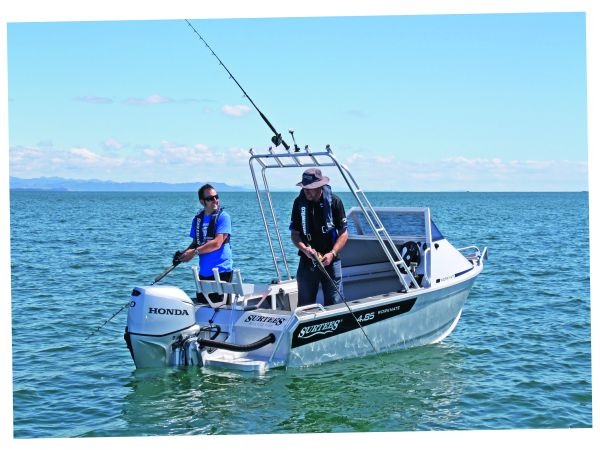 Kiwi company Surtees has packed a lot into its compact 4.85 Workmate.

New Zealand boat builder Surtees celebrates 20 years of boat building in 2013. With the company coming from small beginning sessentially out of a shed on the east coast of the country’s North Island, it is now one of Australasia’s leading aluminium boat manufacturers.

So what has made the brand so successful? Managing director Phil Sheaff says it’s innovation.

“At Surtees, we’ve always been innovators, and in the early days there was a lot of testing on the earlier boats, experimenting with bow shape, spray rails etc,” said Sheaff.

One of the key design features seen on all Surtees boats is the ballasted keel system.

As a response to the GFC, in 2008 Surtees made the decision to build a smaller model, the now widely popular, affordable and successful 4.85 Workmate.

For a boat that measures just under 5m, the 4.85 delivers the feel of a bigger craft.

The forward cuddy provides enough room to keep tackle boxes and other gear under cover and rails down on the floor will stop items sliding back into the cockpit when underway. Small side pockets at the helm are a good place to keep cell phones and keys etc.

A non-skid checker-plate floor runs throughout the entire internal deck, and is easily cleaned and maintained.

The driver and passenger get a pair of simple fold-down seats, which fold out of the way so the interior of the boat can be maximised for fishing. For those who don’t want fold-down seating, the large Surtees options list also allows for fixed seating, with extra storage underneath.

The simple and uncluttered walk-up-style transom has proven very popular with fishermen, says Sheaff. In the port and starboard aft corners there is provision for a pair of tote tanks.

An underfloor 55lt fuel tank is optional, but it would come at the expense of the underfloor storage locker/kill tank. Two tote tanks still provide 50lt of fuel capacity, which, when combined with a modern day four-stroke outboard, provide plenty of range.

A large bait station is a prominent feature of the transom, while boarding platforms on both sides of the outboard provide access into the cockpit, the port one featuring a sturdy drop-down ladder.

As with all Surtees boats, the 4.85 is designed to provide a soft ride, stability and comfort. Surtees says that the smooth ride is the result of combining three innovative design features – the Surtees Non-Pounding Super Deep V Hull, its original Stabilising Technology and its Ultra Strengthened Deck System.

“The stringers are fully welded to the hull, not stitched,” says Sheaff. “The strongest part of the boat is under the floor, where you can’t see it.”

With some gentle rolling swell offshore, as well as a nasty wind against chop on a fast moving internal harbour, there was definitely no pounding during our test. For a little boat, it excelled and sometimes I forgot I was in a smaller craft.

A quick play with the trim and I was able to fine-tune the ride. The Honda 60hp four-stroke outboard seemed perfectly suited to the 4.85, delivering plenty of power and torque when required.

Performance-wise, the Honda had plenty of mid-range torque and pushed the 4.85 to a top speed of 54km/h at 6200rpm. Peg it back a bit and you’ll find a comfortable cruise speed of 36km/h at 4500rpm.

At the helm, the seating position is quite comfortable, with the throttle controls within easy reach and a well-positioned footrest below. The dash is minimal, but practical and has enough room above to mount additional electronics. Sitting down at the helm, the rather vertical-looking wind shield provides great protection from the wind.

The spray deflection rail works really well to repel water when under power, making the Workmate a very dry boat.

As with other Surtees I’ve tested, the ballast system performs well, with the 180lt ballast weight captured beneath the hull, helping the ride through choppier conditions. And it makes the boat rock-solid and stable when at rest.

Back at the ramp, the 4.85 Workmate can easily be launched and retrieved by one person. Being small and compact, it also lends itself to beach launching. Should owners wish, Surtees has a unique optional catch system on the trailer, so that the boat can be driven onto the submerged trailer until a hook built into the bow catches a latch on the trailer. It’s a pretty simple and innovative system.

I’ve always been very impressed by the build quality, attention to detail and finish of every Surtees I’ve been on. Having had the opportunity to go through the Surtees factory myself, one notable aspect of the production process is that every Surtees is built from scratch to completion by one person. It’s a kitset approach, with the various components produced in-house and sourced by each assembler as they weld the boat together.

I have to say I loved the 4.85 Workmate. It’s very well appointed, boasts heaps of room and has a lot of big-boat features packed into its small boat layout. As I mentioned, it has a very comprehensive list of options, so it offers plenty of opportunity to customise the boat to suit individual tastes. A fantastic small boat that packs a big punch.

To locate a Surtees dealer, go to: surteesboats.com.