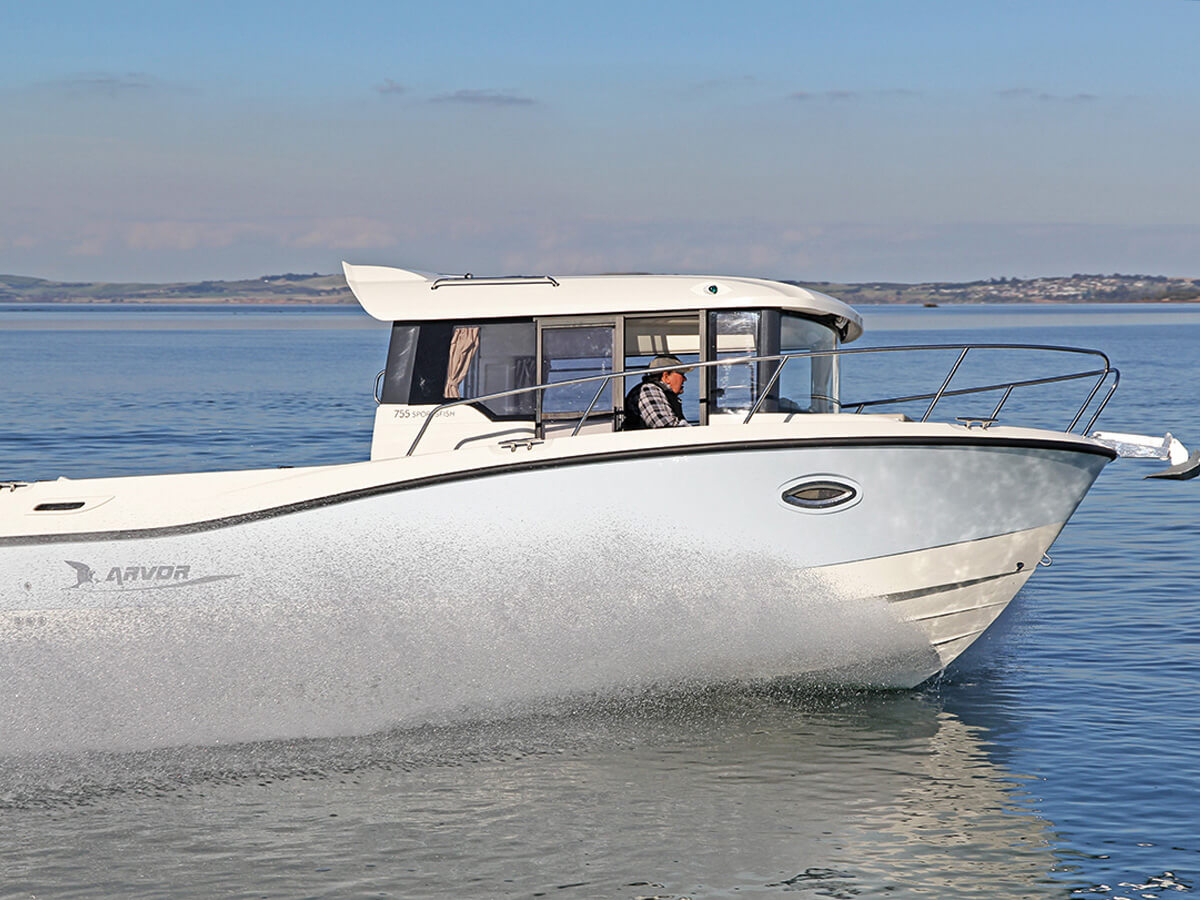 Outboard power gives the new Arvor 755 Sportsfish the performance to match its fish-catching features.
European boat builder Arvor has branched out with a new sportsfishing range that doesn't compromise on comfort.

Versatility is a word that is bandied around a lot when it comes to boat testing. As dollars have become harder to find, boat builders have strived to offer buyers craft that can accommodate a variety of roles, from hardcore fisher to overnight family cruiser.

One range that epitomises this multi-role ability more than most is the just-released Arvor Sportsfish line-up, which is scheduled to debut at the Melbourne Boat Show in June.

Represented in Australia since 1998 by Collins Marine in Alexandria, Sydney, the European-built Arvor range of hardtop craft is predominantly known for its distinctive styling, which tends to polarise boaties - you either like their tall, somewhat slab-like look or you don't.

Until the release of the new Sportsfish range, the Arvor recipe for ocean-going craft included inboard diesel, shaft-drive powertrains, which tend to be favoured by the more mature boatie, who is less likely to be in a hurry to get to the fishing grounds.

But as Collin's Marine dealer principal Peter Collins explained, Arvor has broadened its appeal with the Sportsfish range by switching to outboard power and the higher performance and speed it offers.

"With the great choices now available in the larger four-stroke, cleaner emission engines, Arvor decided it could produce a boat more appealing for the sportsfisher market," he explained. "These people generally want to go a bit faster and so the new range gives them increased performance."

At the time of going to press, Collins had imported three models; the 755 Sportsfish we tested and a 675, both of which will be on show in Melbourne, while the baby of the range, the 605, has just debuted at Sanctuary Cove.

Our test day dawned with weather pretty much perfect for boating, with mirror-flat waters around Phillip Island, where the Victorian Arvor dealer, Phillip Island Marine, is located. The water was mirror-flat, which, while perfect for recreational boating, was not strictly ideal for putting a new craft through its paces.

First impressions of the 755 are its high freeboard and tall, enclosed hardtop cabin. It has the look of a hardy, sturdy craft, designed to cope with serious seas. And, indeed, as with all Arvors, it is intended to handle notoriously harsh North Sea conditions, where large seas and biting, gale-force winds can test any boat.

With its fishing focus, the 755's large and deep cockpit has certainly come in for some attention, with such fishing-friendly features as an above-average size transom-mounted livebait tank and a very neat, fold-up bait preparation station.

A transom door occupies the starboard aft corner and water access is via miniature swim platforms on either corner of the transom, with a fold-out ladder on the starboard side. A total of six stainless gunwale rod holders can be found around the cockpit.

Fishos will also appreciate the twin fish lockers which run either side of the cockpit floor. They're insulated and are drained by a pump running through a macerator, so there's little chance of annoying blockages when cleaning up. Speaking of which, a raw-water deckwash is located next to the transom door. The deck is self-draining, and there's a large storage compartment in the forward section of the cockpit floor, where the twin batteries are housed.

There's also provision for rod storage in a compact moulded recess in the starboard coaming.

An example of that versatility I referred to earlier is the ability of the cockpit to quickly and neatly convert from hardcore fishing mode to relaxed entertainment area. Two generously upholstered seats fold down out of recesses in the transom and port-side coaming, while a compact table, stored neatly in a compartment under the floor, can be quickly assembled to enhance the social aspect of the cockpit.

Underlining the all-weather capability of the 755 is that tall cabin which, in Arvor tradition, is set asymmetrically to the hull centre-line, offset slightly to the port side. Its location provides broad walkaround access to the bow on the starboard side.
While there is plenty to like about the 755, I thought the full-width sliding glass cabin door was a nice touch. It's lockable, providing security, as well as insulating the cabin from the weather.

The cabin is a bit Dr Who-like, in that it's a fair bit larger on the inside than it appears. Features include a plumbed wet-bar, Waeco fridge, plenty of storage and a trio of adjustable, swivelling seats.

The full-width dash includes a shallow map compartment to port, plus a large open tray in the centre for phones and glasses, while the skipper commands a large control panel incorporating all the usual gauges, switches and controls. Our test boat also had trim tabs.

I liked the fact that all surfaces that could reflect sunlight were black and there was a large central space in the dash for a medium-size plotter/fishfinder, although none was fitted to our test craft. Access to the starboard walkway is via a sliding door next to the skipper's perch.

Visibility was excellent in all directions. Good, sturdy footrests are provided on both sides and driving was easy either seated or using the bolsters when standing. Those with a higher outlook on life would appreciate the taller-than-average cabin roof, while the sliding sunroof certainly enhanced the open-air feel of the cabin. Curtains on all windows provide privacy when required.

The open-access forward cabin is quite large and has provision for a central plumbed toilet, for which there is a holding tank. There are also storage compartments on both sides of the V-berth and small portholes on either side.

Three hinged timber slats stored under the V-berth fit into recesses in the cabin floor, which, with extra cushioning, considerably expand the available sleeping space. A small foldout table quickly transforms the cabin into a somewhat compact, though comfortable, dining area. There's that versatility again.

The bow is easy to get to via the cabin side door and at the pointy end is a spacious anchor well and stainless bowsprit, with provision for a drum-type anchor winch. Well-proportioned bowrails provide good security extending back to the rear of the cabin.

The test boat was powered by a 150hp Mercury EFI four-stroke, which is the lowest horsepower rated engine listed for the 755. At the top of the scale is Mercury's supercharged 250 Verado.

Disappointingly, due to availability issues, our test boat was handicapped by a mis-matched prop, which resulted in performance figures that I'm confident did not do justice to the 755.

In subsequent discussions with the importers, I believe the test figures they supplied from the Arvor factory accurately reflect the hull's real potential, although I'd still be inclined to up-spec to a high horsepower engine to get the most out of the hull.

Given that the waters of Western Port were doing a great impression of a skating rink on the day, all I can say about the ride is that it was comfortable. We did venture past San Remo and out into Bass Strait, where a mild ocean swell allowed us to get the bow out of the water. Re-entry was gentle, with no harsh jolts or rattles from the hull.

Peter Collins explained that the Sportsfish base models on offer in Australia enjoy higher specifications than their European counterparts, including such standard features as windscreen wipers, sunroof, fridge, cockpit seats and cabin table, among other items.

He also said that the price as tested ($104,500 - add approximately $14,500 for a trailer) is intended to position the 755 extremely competitively with similar-sized trailerable craft.

While it's pitched as a dedicated sportsfisher, the 755 is really a very competent and well-appointed boat for all seasons and all occasions. With the addition of outriggers and a rocket launcher, it's easy to imagine the 755 trolling a brace of marlin lures out on the Shelf, while it would be just as at home tucked away in a secluded bay with a bottle or two of vino gracing the cockpit table to match the catch of the day.

Overall build quality and attention to detail is hard to fault. There are grab-handles everywhere they need to be, all deck fittings are quality stainless steel and the 755 is designed for practicality, utility, all-weather fishing and ease of maintenance.
For someone who is serious about their fishing, but doesn't want to compromise on comfort, the Arvor 755 Sportsfish is well worth a look.