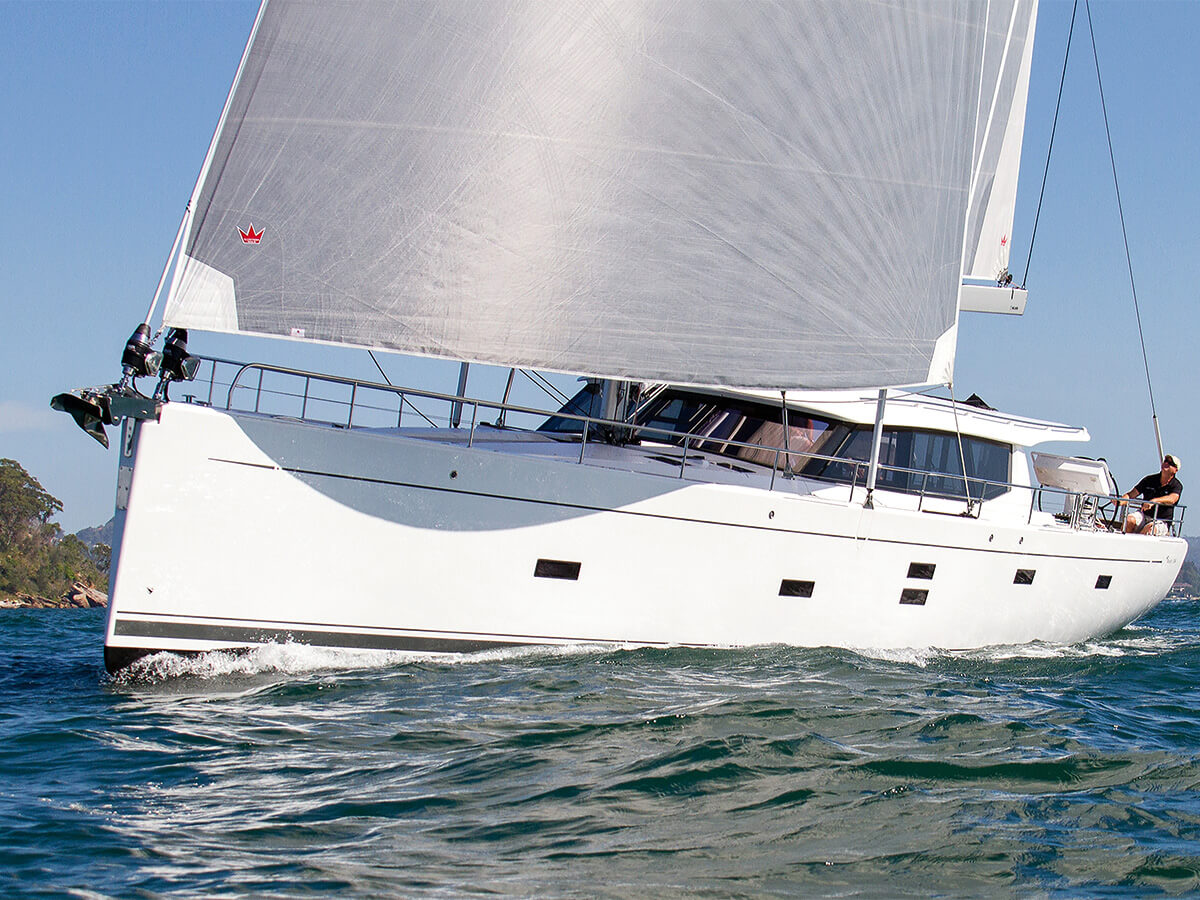 Cast your mind back to the cruising yachts of 50 years ago and it's hard to believe it was the same era in which the screenwriter and futurist Gene Roddenberry first devised the cult sci-fi television series Star Trek.

Yet such is the advance in lightweight materials and digital wizardry that a cruising sailor from the 1960s would feel almost as disoriented aboard a modern yacht as they would aboard the Starship Enterprise.

The axiom for today's cruising fraternity is 'more fun for less effort' and the Moody DS54 appears to be leading the charge in using technology to meet that aspiration. This is a yacht with countless bells and whistles delivered with ingenuity and sophistication. All that and it sails well, too.

Stepping aboard the DS54, it's hard not to be seduced by the one-level living concept of contemporary deck saloon designs. The Dixon Yacht Design team set the benchmark with the Moody DS45 and now the DS54 supersizes the concept. And, while there are inevitably some compromises to space and deckhead heights below, the advantages in the saloon far outweigh any minor downsides in the cabins.

The Hanse Group, which now owns Moody, has made a number of astute acquisitions, gaining some considerable competitive market advantage by doing so and using this leverage very wisely. Evidence of this strategy is found in the DS54, such as in the fine textile trim inlays in the cabinetry and in the shower bulkhead finishes, both drawn from one of the powerboat companies acquired by Hanse.

And while on the subject of cabinetry, the extraordinarily high-quality joinery finish aboard this yacht is worthy of particular mention, especially in the finishing of the insides of cabinets and covers.

The galley, equipped with every conceivable mod con and a great all-round view, allows for easy conversation with those seated at the dining table or out in the cockpit. This location makes a great deal of sense when at sea: heading below to prepare a drink or food when feeling a little queasy is often enough to dissuade crew from doing the very things that reduce exhaustion and seasickness. Moody also offers an option with the galley forward and at the berth level.

Everywhere belowdecks there are clever and sometimes whimsical touches: the TV cabinet beside the navigation desk contains a chartholder, a heavy-duty toolbox drawer is found under the stairs to the forward cabins, and a pop-up wine bar appears with a gentle press down on the galley's Corian surface.

Perhaps one of the most compelling arguments for a deck saloon design is the amount of room it frees up in the hull for storage and access. Aboard the DS54, that volume is positively cavernous - so much so, that you can climb down into the engine room and into the cockpit locker.

The sleeping quarters too, are about style and convenience. The owner's cabin forward is filled with light from the full-length skylight - the forward part of which is also a breeze-catching hatch - and the interior elegantly matches lighting, fabrics and cabinetry. The cabin also offers a smart en suite and a small reading or work desk below the TV, as well as a large storage space below the bunk.

The compromise of the deck saloon configuration is most evident in the port forward cabin with a very low deckhead. That said, there is plenty of light in the cabin and ample room to relax on the berth and watch the TV on the aft bulkhead. While the cabin opposite is smaller, its less intrusive deckhead imbues a greater sense of space.

A rear stairway on the port side leads to a quarter berth and a small head and wash basin (with shower attachment) for day use. This space also contains a washing machine and is useful as a wet area for hanging and drying sailing gear.

The DS54 can be sailed very readily two-up - sailing solo is a breeze, too - with electronic winches and instrumentation all falling easily to hand for the helmsman. Even the headsails no longer need unfurling manually, with two electronic furlers managing the setting and stowing with a push of a button, also saving considerable loads on the forestay.

However, Peter Hrones of Windcraft, which distributes Moody yachts in Australia, and who co-designed the DS54, says they decided to abandon reversible winches for the sail controls as the sails simply did not provide enough load for them to work effectively. So, heaven forbid, you still have to ease the sails manually.

We left the dock with the help of the very efficient bow and stern thrusters and headed down Pittwater for the open sea off Lion Island. The 146kV Volvo engine pushed us along at a business-like eight knots at 2000rpm. With the turbo kicking in at 2100rpm, the yacht could reach a top speed under power of 9.5 knots.

We soon changed mode from engine to sail with an effortless segue. Pressing the controls on the helmsman's instrument panel unfurled the vertically battened mainsail from the mast and the genoa from its furler, both of which were easily trimmed by using the electronic winches just forward of the twin steering positions.

This yacht is no lightweight, but the helm felt firm and responsive as we built to 8.5 knots of boat speed in 14 knots of breeze; a speed that could rise to an impressive 12 knots at a 140-degree true wind angle in 25 knots of breeze with the spinnaker set, according to the design velocity prediction diagrams.

Standing at the helm position gives a clear line of sight forward over the cabin top and when seated, the helmsman can look forward through the deck saloon or, seated to one side, along the side decks.

Perhaps the most impressive part of the helmsman's domain is the instrumentation panel at each helm position. Aside from the sail controls, the panels contain Raymarine's i70 multifunction displays and gS125 GPS chartplotters. The flick of a finger on the screen changes the display, with the clear illumination and crisp graphics reading strongly in the brightest of sunlight. Captain Kirk would have to be happy with this set-up.

So there you have it, a very impressive yacht that is at once home, work station, entertainment venue and recreation, all to be enjoyed at the press of a button. It's intriguing to look back on the 50 years of design evolution that has brought us to this point and to ponder what might lie ahead in the next 50.

As Spock would say: "Fascinating!"