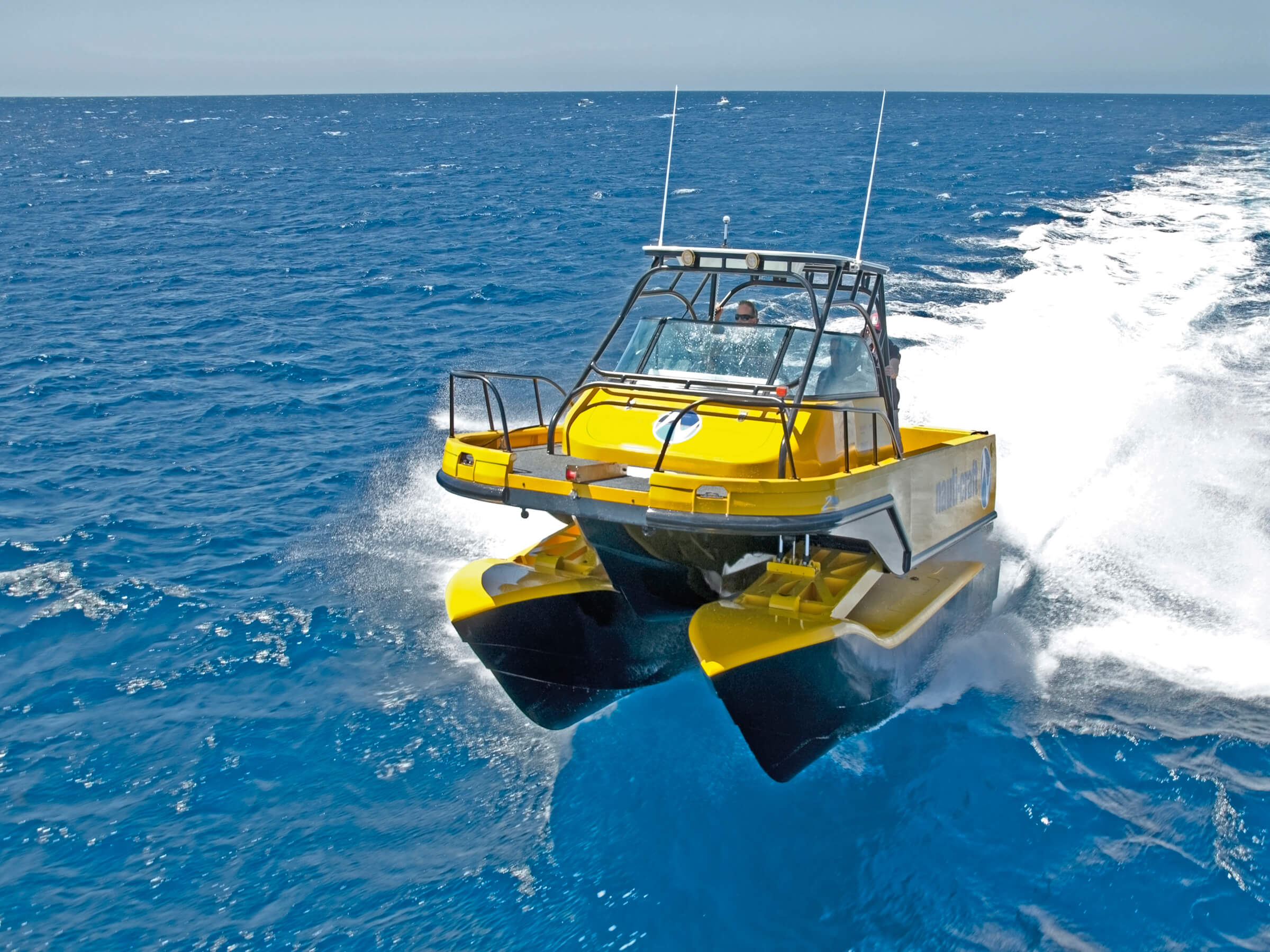 Nauti-Craft’s remarkable vessel sports a unique hydraulic suspension system, considered by some to be a world breakthrough in marine design.

We’re doing 34 knots in a following sea off Mandurah, Western Australia, with a 20-knot south-westerly up our stern when skipper John Catoni throws the remote control into neutral. The sudden stop on a conventional craft would have dug the nose in and passengers would have been spread all over the deck or smashed into something solid, coming out second-best.

I’m on a prototype vessel along with five company personnel and this is a test run. With the twin 300hp Yamaha motors cranked up to 30-plus knots, test skipper John Catoni instructs us to “hang on!” Registering a speed of 34 knots, he cuts the power.

It took all of a split second to come to a halt. Standing next to John at the helm, I looked behind – my fellow passengers were, like me, grinning like Cheshire cats. The stop was instant and the forward momentum was minimal.

“How’s that for a stop?” John asked. I was amazed – no burying of the bow and no broaching.

I’ve been in situations before when a vessel has had to make a sudden stop at high speed and if the skipper had not known what they were doing, the result could have been disastrous.

This controlled demonstration was done especially for my benefit. I’m onboard the 8m catamaran 2Play, designed by a group of specialist naval architects, engineers and technicians at Nauti-Craft, an R&D company based at Dunsborough, near Margaret River, in the southwest of Western Australia.

The vessel’s hulls are separated from the deck and superstructure via a ‘passive reactive’ interlinked hydraulic suspension system and the pontoons react to conform to the ocean surface. The result is a deck area with improved stability, a more level attitude and a comfortable ride in rough conditions.

The creators, inventor/founder Chris Heyring and team, also founded the automotive suspension technology company Kinetic, whose suspension systems were used by Mitsubishi in the world’s toughest off-road race, the Dakar rally. Citroën also used the system for its World Rally Championship team vehicles. Both the Mitsubishi and Citroën rally teams using Kinetic’s technology blitzed the rally for three years … until the Kinetic system was banned. Too good.

McLaren also installed the suspension units in its road-going GT car, the MP4-12C and P1 high-performance vehicles, while Toyota and Nissan use it in their high-end off-road vehicles. Being a ‘skunkworks project’ company, Kinetic was sold to the US firm Tenneco Automotive, which owns the Monroe brand of shock absorbers.

Heyring says he originally started working on a suspension system for the marine industry 10 years ago.

“Ironically, I wanted to develop a boat with a suspension system before we started on the cars, but that meant building a whole new vessel to accommodate our system, so it was logical to work on the pre-manufactured cars first.

We subsequently secretly carried out about 40 suspension conversions for car companies around the world. They would fly the cars to Perth and we would work on them in top secret down here at Dunsborough,” says Heyring.

Nauti-Craft’s first prototype was an 8m ‘quadmaran’ named 4Play, which included four pontoon hulls linked by suspension arms to the main hull. The hull remained virtually level while the pontoons coped with the varying sea conditions. The quadmaran was followed by a 1:10 scale model of an 18m commercial wind farm vessel for the United Kingdom’s Carbon Trust. Nauti-Craft then constructed the 8m catamaran 2Play that we’re on today.

Earlier in 2014, the 2Play prototype completed sea trials in rough waters off Cape Naturaliste, WA, before being presented to Seawork International in Southampton, UK, Europe’s largest commercial maritime and workboat exhibition. Aimed specifically at the wind farm industry, where service technicians have to battle huge seas to board turbine platforms, the world debut of the Nauti-Craft Suspension System was met with resounding success.

Making its first Australian public showing at the 2014 Club Marine Mandurah Boat Show, the vessel performed in front of big crowds, demonstrating its agility to the beat of Don’t Rock the Boat. In the confines of a boat pen, electronics engineer Paul Roocke stood on the bow and used a hand-held remote control to power the hydraulic pistons into action, demonstrating the flexibility of movement. At sea the action is reversed, with the deck and superstructure remaining relatively level, while the twin hulls move with the action of the water.

Such a breakthrough in technology to smooth out rough seas has attracted international attention. Western Australian sea rescue personnel, water police and government marine offices were greatly interested at the Mandurah showing.

Out on the Indian Ocean, after a series of fast runs into the wind and hard figure-of-eight turns, skipper John Catoni handed over the helm to me. I was surprised at the ease of movement through the water and lack of resistance. The vessel is fitted with a well-known brand of hydraulic steering and the twin Yamahas can be directed using the power of one finger. Unlike other catamarans, this vessel leans into the turns and tight corners. You can feel the hulls reacting to the action of the water while the deck remains level. At rest, the hydraulics are used to raise the platform while the separated pontoons ride the waves. Chris explains how the vessel can be held against a wind turbine platform in this mode while the level deck height is adjusted to allow technicians to board or alight with safety.

This prototype aluminium/composite vessel was built to carry eight people and 440lt of fuel and has recorded speeds up to 44 knots (81.5km/h).

While the ocean was choppy, whipped up by the ‘Fremantle Doctor’, the ride was smooth and comfortable. Visibility was tremendous due to the height above the ocean; a good 2m. While immediate application is for the commercial market, refinements are underway to make it attractive to the recreational boating scene.

2Play has since been stripped down and Nauti-Craft engineers have been busy changing dampers, cylinders and software and further fine-tuning has been carried out off Cape Naturaliste. Chris Heyring says the changes have made the vessel even more stable.

“We have three team members now in the Middle East negotiating a licence for clients to build Nauti-Craft luxury pleasure boats,” says Heyring. “And before that they were in Europe and the United States negotiating to build commercial vessels to service the wind farm industry plus military requirements over there.”

For more, or to view the videos on YouTube, go to: nauticraft.com, or email: info@naut-craft.com.