Pride of the fleet 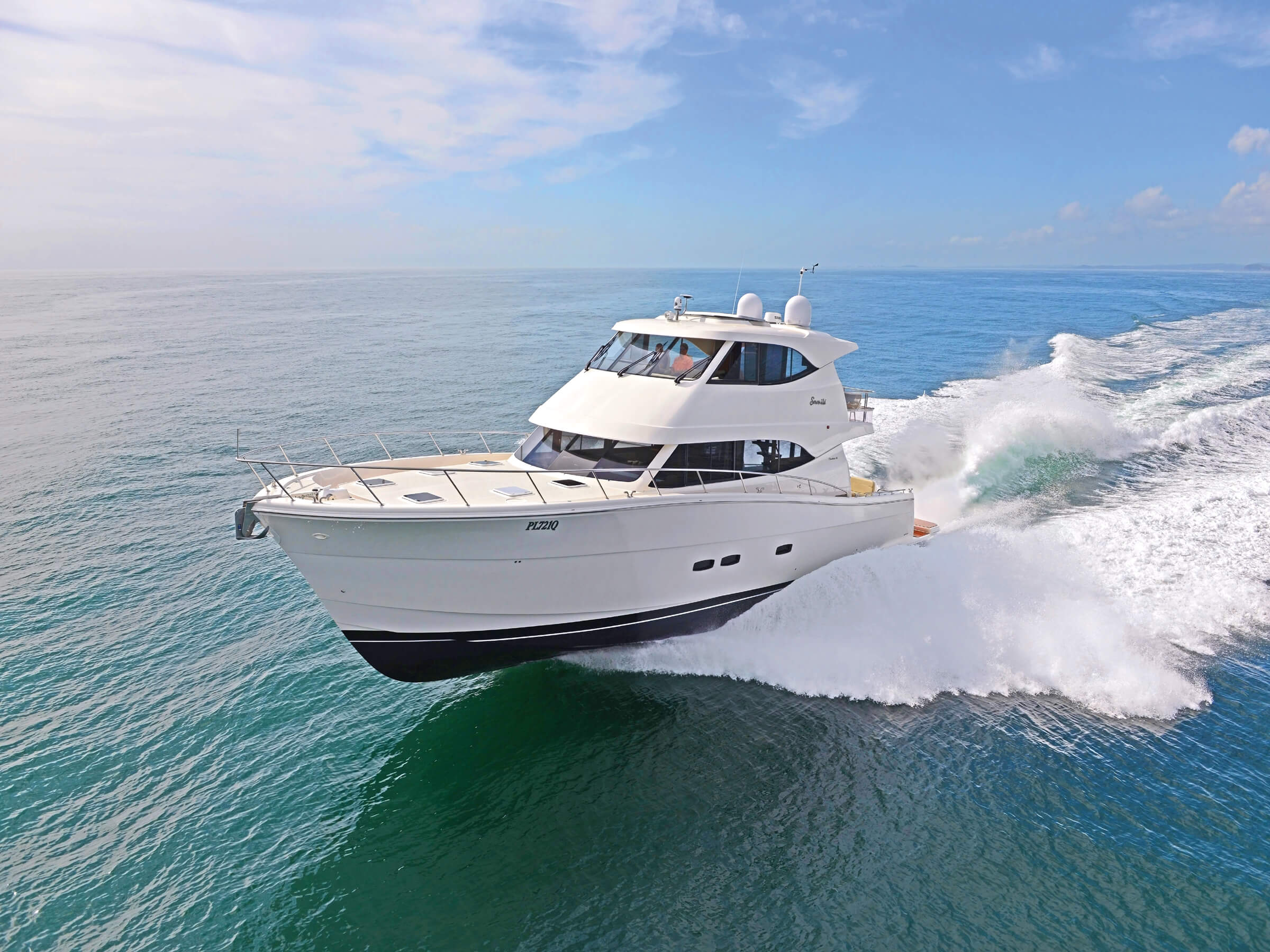 It’s almost like having two boats in one.
The M65 Motoryacht raises the bar in luxury and fitout as Maritimo cruises into its second decade.

Speaking to Maritimo staff, it’s obvious the new M65 Motoryacht luxo-cruiser embodies a lot of pride in the brand. And for good reason. This is a boat that showcases the capabilities, skills and heritage of Maritimo to the full. In terms of sophistication, concept and finish, the M65 gives nothing away to other elite brands in the class.

But apart from the factory input, it also has the benefit of a lot of feedback from experienced boaties in the form of current Maritimo owners, in particular the five who have so far laid down their hard-earned to get hold of the new enclosed flybridge cruiser.

Like our review craft, M65 number two, which has been comprehensively customised to suit its South Australian owner’s preferences – which makes perfect sense. If someone is spending $3m-plus, it’s reasonable to let them expand their options a little beyond interior décor and bathroom fittings.

Without wishing to downplay the technical specifications of this very impressive cruiser, it’s the living and accommodation spaces that truly define the M65. From its spacious and uncluttered cockpit to its opulent saloon and vast and chic full-beam master suite, this is a boat to be lived in and on. The fully enclosed flybridge epitomises the focus on comfort and space: as Maritimo Marketing Manager Greg Haines pointed out, it’s bigger than the saloon on most 40-footers, with enough room to accommodate a boat-load of party animals, including on its spacious aft-deck.

With ample food-prep, bar, storage and entertainment facilities upstairs, it’s almost like having two boats in one.

It’s worth the climb upstairs just to sit at the helm, replete with a view that you’d otherwise only get from a low-flying helicopter or aboard a ship. Conversely, the dash doesn’t overwhelm with switches and controls. Like the rest of the M65 interior, it may be feature-packed, but the interface is simple and elegant. On our test craft three large 19in Simrad screens tell the skipper all they need to know, while throttle, joystick and thruster controls are all easily to hand.

Either side of the aft balcony are two additional driving stations which, with another in the cockpit, make a total of four driving positions, not to mention the optional remote Yacht Controller. Controls include a TwinDisk EJS hydraulically activated docking system, incorporating hydraulic thrusters and a station-holding facility.

Meanwhile, guests have lounging and seating options on both sides, with a fold-out timber table servicing the starboard-side lounge. Directly opposite, next to the top of the staircase, is a large cabinet for storage and a bar fridge and sink in the port rear quarter, with a swiveling TV mounted above that can be viewed from the deck or interior. The bi-fold doors open to expand the flybridge saloon to the balcony to make the whole upper deck a great entertaining area.

But most guests may never make it upstairs, with so much to occupy them below, such as the cavernous saloon and Miele-equipped galley and bar. This particular boat was optioned with South African-sourced wenge timberwork, the dark and deeply varnished wood used extensively throughout the interior spaces.

Cooking features include a new Miele combined convection/microwave/grill oven alongside a four-burner stove top. Owners get to pick their galley options and when ticking the Miele box, they also get to attend cooking classes.

There’s a full-size fridge freeze and another smaller freezer in the island servery, and plenty of extra storage options, with sliding cupboards and racks everywhere. And completing the ‘one-with-the-lot’ option pack is a special Zip tap that dispenses hot, cold – and sparkling – water.

The breakfast bar serves the main saloon, which has plenty of plushly cushioned leather seating options on both sides. A large wenge folding table services the starboard lounge for snacks and mealtimes and there is abundant natural light courtesy of 360-degree windows.

For serious entertainers there is also a Miele 36-bottle wine fridge, zoned for reds and whites of course, beneath the flybridge stairs.

The bi-fold cockpit doors effectively create a massive single-level entertaining area with unhindered access indoors and out to the cockpit, where there is ample room for fishing or entertaining. Amenities include an ice-maker, cold storage options, a livebait tank, freshwater washdown, barbecue hotplate, fold-out wenge table and a European-style transom, with fold-down lounge and a large lazarette beneath. A nice touch on the test craft was a set of stairs that fold down electronically from the swimplatform to accommodate divers and swimmers.

Dominating the lazarette is a Seakeeper gyro stabliser, which Haines says is becoming an increasingly popular option for buyers in the 50ft-plus category. Stopping the rock ‘n’ roll is not cheap though, as the gyro on our test boat added over $200,000 to the pricetag, although it reduces motion by up to 70 per cent at rest and underway. Keeping the gyro company were various other utility items, including a washer and dryer, watermaker and air-conditioning units.

Access forward is via deep and secure walkarounds. Perched on the forward deck was a large Nautilus tender launched by a davit that looked easily up to the task. Ground tackle and Muir retrieval gear looked suitably serious for a 65ft ocean roamer.

But the real wow factor on this boat is beneath decks, beginning with the three upper level cabins in the accommodation areas. Leading down a stairwell from the front of the saloon there’s a twin-bunk cabin to starboard, with a day head next door that also services the forward guest cabin. With its island berth, the forward would qualify as a perfectly respectable master in its own right, its polished timber and leather lining complemented by twin deep hanging lockers and plenty of storage options.

To port is another generously proportioned double-berth cabin with its own en suite head and shower, but descend a few more stairs and you enter another world altogether.

Not only could you swing a fairly largish cat in the main full-beam cabin, you could probably throw it a fair distance before it hit anything. This is a truly five-star sanctuary, complete with enough hanging lockers, metre-deep drawers and cabinets to fit out a decent-sized hotel room. The conventional king-size bed still leaves plenty of walkaround room to access the full-beam bathroom to the rear, which is the most impressive I’ve seen on a boat of this size. Acres of polished wenge and ample soft coverings convey a sense of elegance and style enhanced by generous natural lighting via three rectangular portholes on each side.

But all of this opulence is nothing without the means to get you where you need to go. Providing momentum on our test boat were a pair of C18 1150hp Caterpillar engines, which propelled the M65 to a top speed of 30 knots (55km/h). Other engine options are available from Volvo, MAN and Scania. The big Cats were easily up to the task of moving this 40-plus tonne (wet) boat, but engine noise was unobtrusive even at WOT.

While circumstances prevented us from venturing seaward beyond the Gold Coast’s Broadwater, I can vouch for the M65’s ability to run flat on the plane, with no real discernible rise in the bow as the hull achieves maximum efficiency. It leaves an impressively flat and benign wake, indicating that the hull is displacing a minimum amount of water when underway.

Ideal cruising speed is around 21 knots (39km/h), which, with a full fuel load of around 6600lt being consumed at 12.86lt/nm, underlines hull efficiency and allows an impressive range of almost 600nm (1100km).

From any angle, the M65 looks the part. Whether exploring her five-star interior spaces or admiring her from afar, it’s abundantly clear that Bill Barry-Cotter and his crew have delivered a startlingly opulent craft that exudes elegance from bow to stern. Space has been optimised, yet never compromised in a sophisticated craft that will be just as comfortable at anchor in the Whitsundays as it will exploring the far reaches of the Kimberley.

In the M65, Maritimo has disproved the adage that you can’t take it all with you. Indeed, you can, plus an entourage of friends and family to make the most of your time on the water.