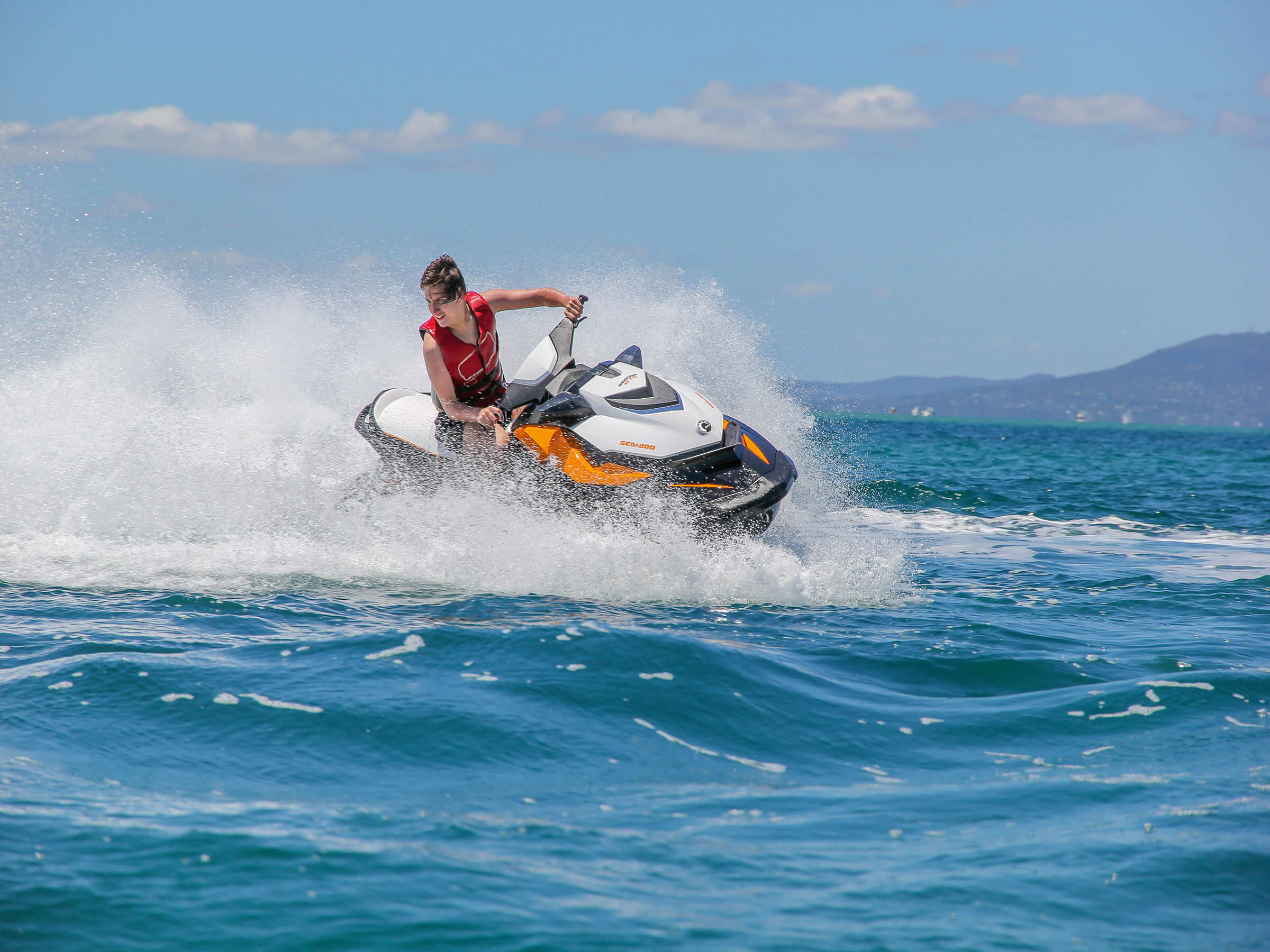 The family motto when it comes to PWCs is: “There is no such thing as too much air.” Admittedly this has led to occasional unintended outcomes in which both passenger and rider have experienced fairly major dismounts, but, by and large, whenever we’re out and about on a Sea-Doo or other fun machine, we don’t go looking for flat water.

So after picking up Sea-Doo’s GTR 215 from Melbourne Sea-Doo earlier in 2015, we were looking for wind and waves and I’m happy – though still somewhat tender here and there – to report we found them on numerous occasions.

Having tested numerous Sea-Doo skis in the past, I was keen to climb aboard the GTR 215. Considered an introductory model in the Performance range, which also embodies the RXT 260 RS and RXP-X 260 RS racer, it, nevertheless, comes with a bunch of features that give it plenty of capability and versatility.

It is a stylish package, too, with a sporty look and edgy graphics in keeping with its intended usage.

Throbbing away inside the hull is a muscular and well-proven 1503cc Rotax three-cylinder, supercharged, four-stroke engine that gives the GTR plenty of oomph when needed. Its 215 horsepower is channeled through a reliable and robust jet system driving through a solid and stable hull.

Closed-loop cooling ensures there are no concerns about internal salt corrosion inside the engine.

Power delivery is strong and predictable. The vast reserves of torque are available from idle, so that the GTR is able to react instantly if the rider wants to reposition in a hurry, which is handy when you’re manoeuvring in choppy or big wave conditions.

The GTR’s performance is wrapped within an overall package that encourages confidence, with great Sea-Doo standard handling features such as iBR, an industry-leading braking and reversing system that actually works. And then there’s iTC, Sea-Doo’s digital throttle control that employs preset engine mapping to suit Touring, Eco and Sport modes. We regularly switched between all three depending on where we were and what we were doing at the time.

Designed as a three-seater with plenty of handholds for passengers, it is a comfortable craft that delivered great performance whether fully loaded or one-up.

The throttle and iBR controls are on opposite ends of the handlebars and were sensitive enough, without being too touchy in rougher seas. The combination digital and analogue dash was also easy to view and use.

The hull has had the benefit of a lot of cross-platform development throughout the range over the years and acquitted itself well in the varied conditions we encountered. Turns are effortless at most speeds – the rider’s ability to hang on being the only limiting factor – and it is a relatively soft-riding hull in chop. Given the fact that it is capable of carrying three people and weighs in at 363kg dry, it proved to be a satisfyingly nimble handler, too.

Adding to the GTR’s versatility is a spacious forward luggage compartment that accommodated everything from an esky, assorted towels and all the other gear needed for trips where we relocated away from the boat ramp for the day. Smaller items can be stored in a compact glovebox in front of the rider.

Considering we were switching through the various engine modes, we were getting close to top-up after around two and a half hours of fairly spirited usage from the 60lt tank. In terms of physical endurance, that was more than enough time on the water for a typical day anyway.

FOOLED BY THE FILLER

One small irritant I found was the fuel inlet port, which can deceive when it comes time to top up the tank. The filler nozzle needs to be held a little out of the fuel inlet and at a particular angle, otherwise splash-back can fool you into thinking the tank is full. It caught me out once when I thought I’d filled the tank to the brim, only to find it was less than half full once we’d launched. Worth keeping in mind to make the most of your time on the water.

Otherwise, we found the GTR to be the consummate playmate, never straying outside of its comfort zone no matter the conditions or how adventurous we were. It is a very forgiving craft, easy to control, with great styling and is very stable at rest.

This is a feature-packed affordable family package that offers more than adequate performance in a PWC that can switch from hardcore watersports to family fun at the flick of a switch.

And, of course, it is capable of achieving significant air, should the urge arise.

Recommended retail price is $18,800 with trailer. Find out more by dropping into your local Sea-Doo dealer.