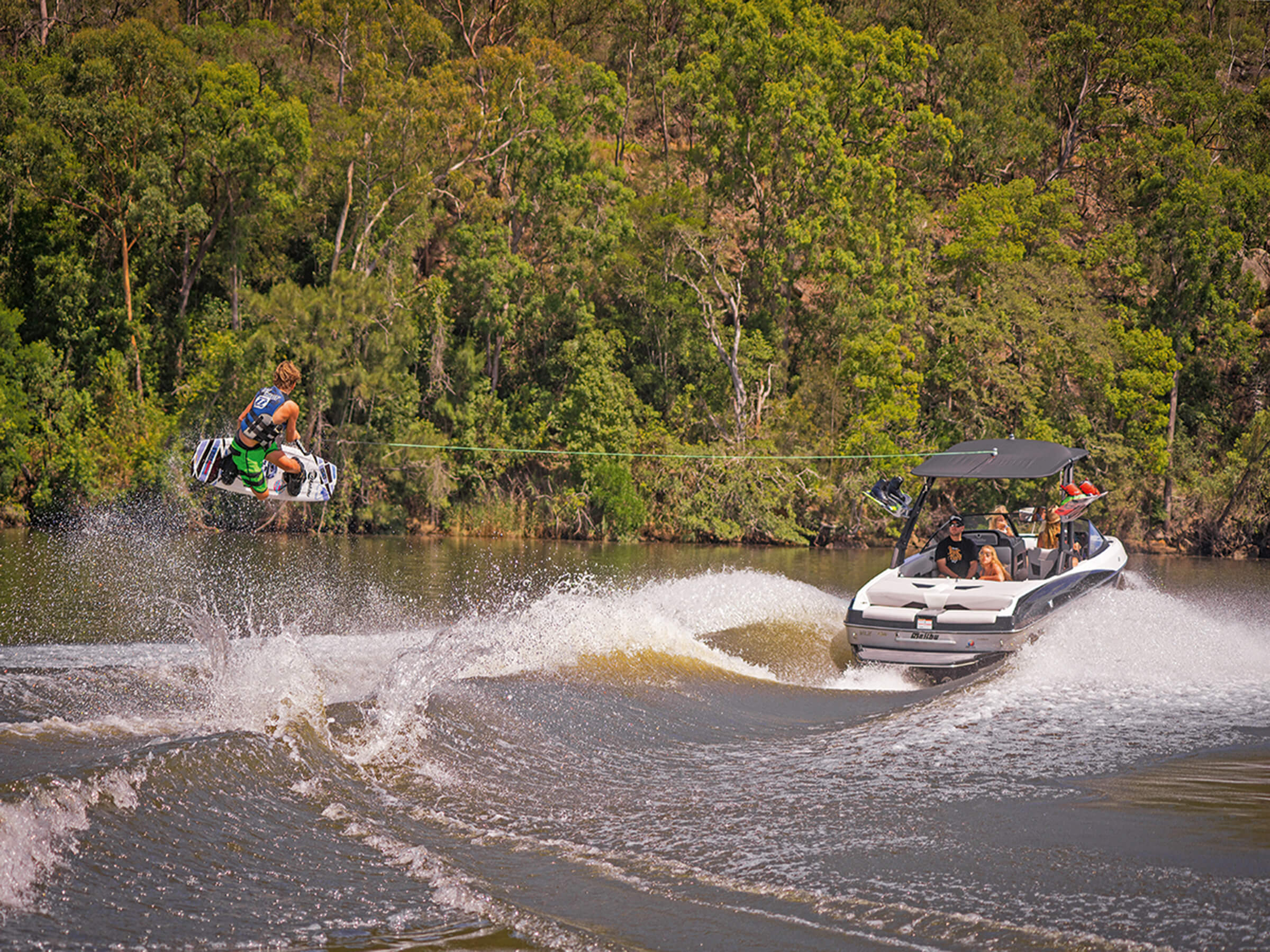 Macauley couldn’t get enough time behind the VLX and reeled off trick after trick in an exhibition of his championship talents.
Malibu has bolted some new wake-making innovations to the Wakesetter 22 VLX’s specialist hull.

Malibu Australia is known for the quality construction and fitout of its boats and its new Wakesetter 22 VLX holds to those standards. It feels strong, is most comfortable and performs at the very top level.

While the underwater running surfaces of the 22 VLX are exactly the same as its siblings produced in the US, the Australian design has been adapted with CAD-engineering to have a slightly reduced beam of 8.2ft (2.5m) that fits within local towing-width limits. In practice, the change is not noticeable as it is still a very roomy, 21.8ft (6.65m) bowrider.

With an increasing number of younger riders keen to develop their wakeboarding skills, the 22 VLX has been designed to plane at a lower speed. This enables families teaching their young ones new tricks to do so without having to run too fast, too soon. Even at 18mph (29km/h – the sport refers to speeds in ‘US-speak’), the wake behind the 22 VLX is clean and rideable.

The layout is typical Malibu, with a well-upholstered forward cockpit equipped with drinkholders, grabhandles and stereo speakers. The centre cushion lifts out from above an optional forward ballast tank (installed on this boat). Three other ballast tanks are standard – one under the main cockpit, the other two either side aft under vast storage lockers beside the engine bay.

A passageway between the cockpits is wide enough for easy movement through an opening screen panel and has storage recesses either side that house more speakers. The main cockpit has one of the best driving positions in the business, supported by full-perimeter seating above more stowage spaces, including a removable Igloo cooler. The centre-aft cushion reveals a storage tray that lifts out for access to the transmission and bilges.

The sundeck has twin hatches that hinge outward from above both the central engine bay and those two huge side stowage lockers. Behind that, rearward-facing seats in front of the big boarding platform also pivot up from above non-slip steps. All the hardware is beautifully made and intelligently positioned.

A new Illusion G3.2 tower soars almost artistically above the cockpit and carries swing-in combo board racks as well as a generously sized bimini shade cover. The tower lowers for garage storage with a very neat and easily used hinge/ latch arrangement.

The highlight of this 2015 Wakesetter is a giant new 12in colour touchscreen. The quality and clarity of the graphics is outstanding, with ‘gauges’ such as speedo and tacho digitally represented in analog format. The touchscreen also displays graphics for the ballast tanks along with digital readouts for speed, engine data, and Power Wedge or Surf Gate deployment. It also has displays that function as a depth sounder, and a media controller for iPod and USB connectivity.

Malibu also provides a smaller 7in touchscreen to the right of the steering wheel to control ancillaries such as lighting and bilge pumps. It also alerts to upcoming service reminders.

The standard Zero Off cruise can be selected to control and report on boat speed over the paddle-wheel transducer, when conditions suit.

The main 12in computer-controlled screen contains a number of factory-set configurations for wakeboarding, wakesurfing, and skiing. Selecting any one of these from beginner wakeboarding to expert, surfing left or right, or skiing, fills appropriate ballast tanks to certain levels, deploys the Power Wedge to a suitable angle or activates Surf Gate, and sets an optimum speed. Personal pre-sets can additionally be established for individual riders and those, or the factory settings, can be recalled at any time.

Or you can simply touch the ‘Go Home’ tag and the Wakesetter returns to its base configuration with empty ballast tanks, retracted Wedge/Gate and with cruise control turned off. For such a sophisticated system, it’s remarkably simple and intuitive in operation.

For 2015, Malibu has also enhanced its Power Wedge. Power Wedge II is 30 per cent larger for greater and more efficient effect on the wake, and has a really clever Auto Lift feature: after pre-setting the Wedge to an angle suited to the chosen configuration, the Wedge initially moves to a position that helps the 22 VLX rise onto the plane more quickly, with extra lift at the stern. Then, as soon as the hull is established on plane, the Wedge reverts to its chosen pre-set angle for wake shaping. This not only makes getting on plane faster and easier, it reduces the load on the engine and saves fuel.

Further aiding the easy control of the Wakesetter’s features is a VDC joystick-style control knob to the left of the wheel. Also contributing to the relaxed driving of the 22 VLX is Dock Mode, which reduces the amount of power from the engine during docking or when launching and retrieving the boat from a trailer.

Standard power for the 22 VLX is a 350hp fuel-injected Indmar Monsoon 5.7lt V8. Our test boat had an optional Monsoon 409hp L96 6lt V8. Both engines come with PIN-protected keyless pushbutton start/stop, and a smooth FNR transmission. The L96 gave enormous grunt both out of the hole and for mid-range acceleration, with towing capacity in reserve.

With a crew of seven onboard, the 22 VLX was untroubled when running with empty ballast tanks and with both the Power Wedge and Surf Gate retracted. We were comfortably on plane at 2800rpm and 17.5mph (28.1km/h). When using the Wakesetter as a family cruiser – a task at which it also excels – mid-range speeds were quiet and smooth, anywhere between 3000rpm for 22.9mph (36.8km/h) and 4000rpm for 33.2mph (53.4km/h).

Even when pushed past that into higher speeds, the Malibu stayed relaxed and topped out at 5500rpm for 42.6mph (68.5km/h) – which is plenty fast for rider-free exhilaration.

With relatively high topsides and good forward buoyancy, the Wakesetter charged dry and clear though wakes and washes; its soft ride would make it a good dayboat on more open waters such as Sydney Harbour or Melbourne’s Port Phillip Bay.

The driving position is impossible to fault with a supportive seat and ideal ergonomics. Both steering and throttle controls are light and progressive and the Wakesetter responded immediately to everything it was asked to do. Turns tighter than normal use would require were no trouble at all, with the hull design, engine and prop working in well-tuned partnership.

A flip-up bolster on the seat gives a higher line of sight, still with good protection by the screen and also still with good back support. Under-knee and lateral support diminishes a bit, naturally enough, but the raised driving spot would be perfectly comfy for long periods. The wheel is tilt-adjustable, as you’d expect, and so is the big main display panel so it’s a snap to arrange everything to suit your personal viewing angle.

It would seem that both Malibu and its 22 VLX are destined for big things in 2015 and beyond.