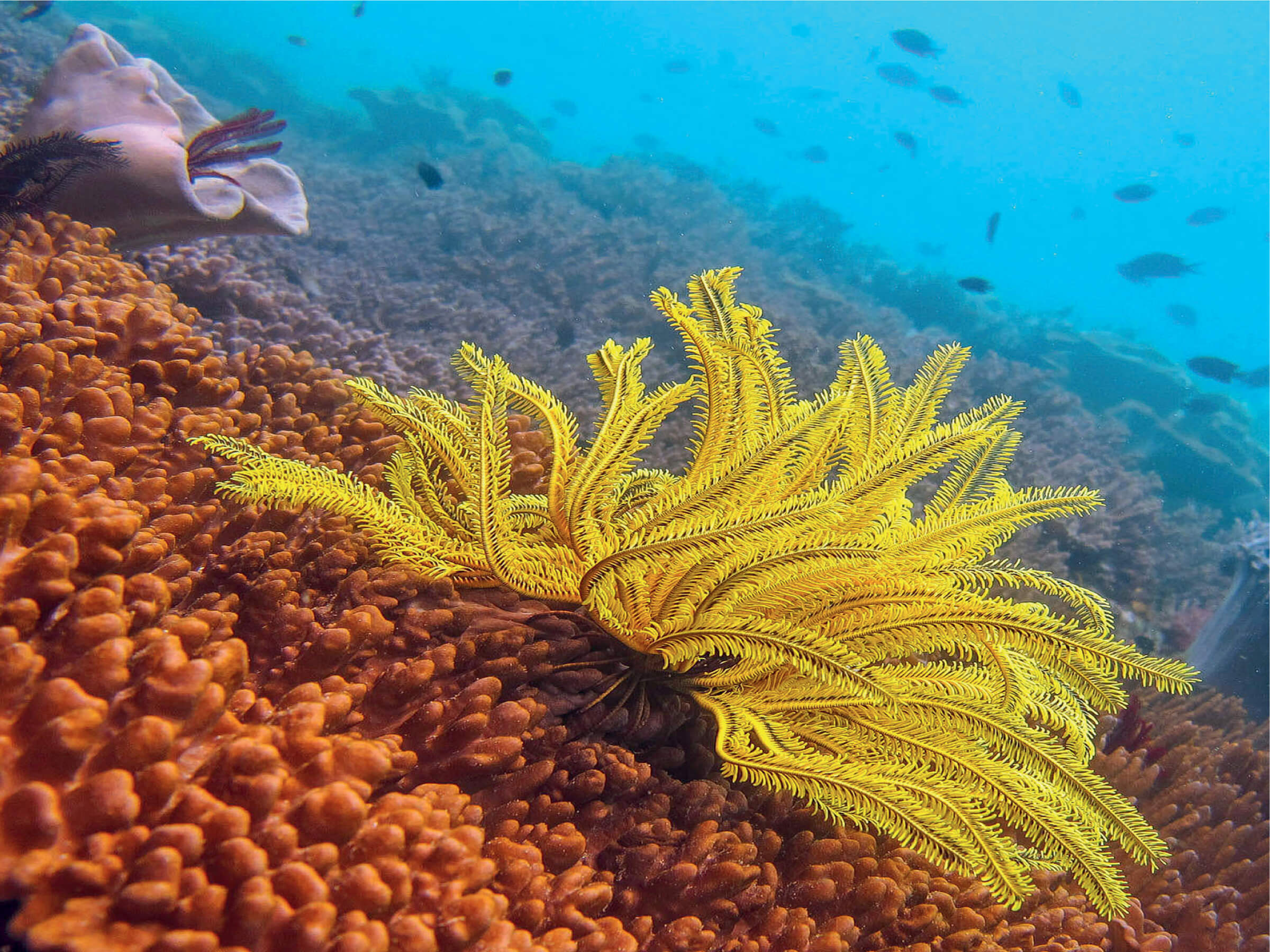 There are some creatures out there that seem to redefine the bounds of imagination. One look at a feather star and you’ll know just what I mean.

Often mistaken for brightly coloured clumps of seaweed, these alien-like, filter-feeding animals belong to the extensive group of primitive marine organisms known as the Echinoderms, which, in Latin translates to ‘spiny skin’. Of the more than 7000 species belonging to this phylum, which includes the well-known sea stars, urchins, sand dollars, sea cucumbers, brittle stars and basket stars, 600 comprise the feather stars, or crinoids as they are more formally known.

For sheer eye-catching beauty, these ornate sea creatures cannot be beaten. Feather stars are essentially made up of sticky ‘arms’ that reach out into the current and capture passing planktonic prey.

The body plan of all Echinoderms is based upon so-called pentamerous symmetry, or the arrangement of five outwardly radiating feeding grooves, as seen clearly on the underside of a sea star. But in many species of free-swimming feather stars these five arms may become highly branched, yielding up to 200 separate limbs, giving the animal a very bushy appearance.

Basket stars are an even more spectacular example of branching arms, the benefit of which is greatly increased filter-feeding opportunities. The crinoid’s beautiful, unfurling arms encircle a disc-like calyx that comprises a centralised, upward-facing mouth sitting atop five or more downward-facing feet, known as cirri, that function much like a bird’s claws, gripping firmly onto surfaces. If they need to change their position or are knocked from their perch by the swish of a sharks’ tail, they can use their arms to swim, or their feet to crawl.

Swimming is achieved by simultaneously undulating their arms in a rhythmic, up-and-down motion that is curiously hypnotising to watch. In the event a predator comes along and begins nibbling on an arm, like a lizard, they can quick-release that body part and take off to safety!

Crinoids come in dozens of variations of pattern and colour, from sunflower yellow to lipstick red, emerald green to velvet purple – Gaudi would have really loved these guys! Deep-sea varieties of feather stars grow lovely long stems, up to a metre in length in some species, giving them a distinct flower-like appearance that has led to their nickname of ‘sea lilies.’ Fossil records, dating back to over 400 million years, are peppered with the fragmented remains of these successful beasts.

As is the case with all ecosystems on Earth, as one probes deeper into the picture, you almost always discover worlds within worlds, animals living within animals, and the feather star is a classic case in point. The crinoid clingfish spends its entire life living within the protective folds of the feather star’s central tendrils, feeding on scraps of food collected by its host. Perfectly camouflaged, this clever commensal has found a secretive niche for itself, even if it means that it doesn’t get out much …

Similarly, crafty crustacean counterparts include the miniature squat lobsters and crinoid shrimps, which are coloured and patterned to match their specific host.

When we apply the magnifying glass to nature, we often come away marvelling at the fine mechanics of evolution. Mind-boggling stuff.