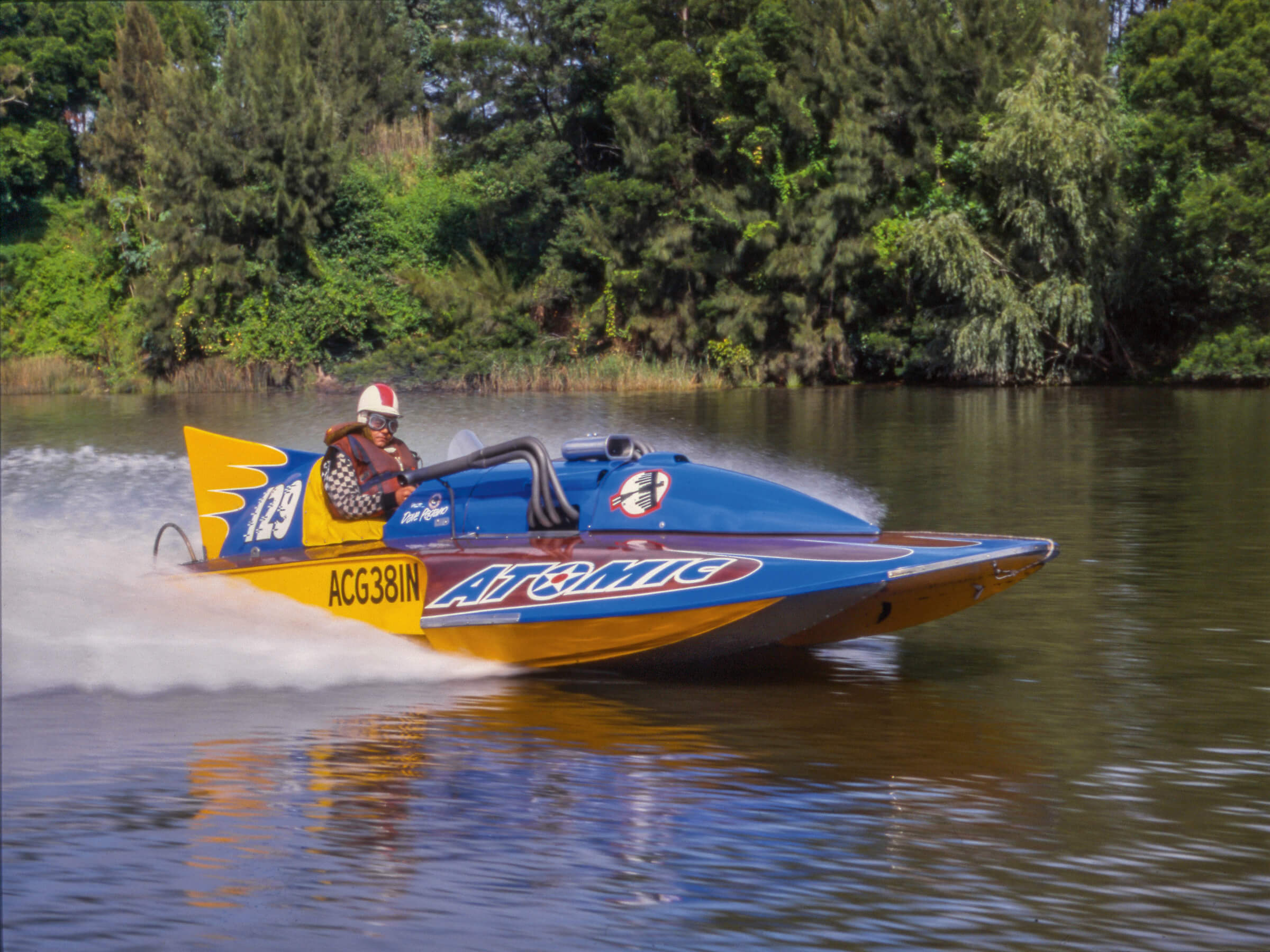 David Pagano is a classic powerboat collector extraordinaire, with countless specimens in various states of restoration.

The high-end collector car market is soaring, with huge prices paid for vehicles with an element of rarity or notable history. But this latest trend is not for perfectly restored cars, rather for ‘barn finds’ – cars stored for years in a barn or similar. In the past, these cars would be restored and then displayed in top-level concours events, but nowadays they are often just cleaned up – not even that, on occasion – and displayed ‘as found’.

There’s a growing interest to do the same with boats, as these have the same nostalgic appeal and many represent significant developments in design or on-water performance. In the US and Europe, boating concours events are already big business, but that’s not yet the case in Australia.

It’s surprising, in a way, as Australia is very much a boating nation with a boating industry that’s recognised internationally for excellence in design and construction. Our wonderful recreational boating history, though, is largely being ignored – with the exception of the efforts by maritime museums and owner groups. Their funds and resources are limited, though, especially when it comes to powerboats, with sailing craft carrying a higher profile in the market.

In light of this, it’s admirable that David Pagano has invested monumental personal effort to collect, care for, and restore a variety of significant Aussie powerboats. At this year’s Sydney International Boat Show, he single-handedly mounted a display comprising a small part of his vast collection that ranges from the Merlin V12-powered unlimited hydroplane Aggressor, through classic Chris-Craft-style sedan cruisers and speedboats, to an as-yet unrestored outboard runabout.

Dave has always had an interest in old cars and motorbikes. Some 20 years ago, he and his brother Paul watched the classic movie On Golden Pond, which starred (along with Katharine Hepburn and Henry Fonda) a vintage mahogany Chris-Craft speedboat. Paul mentioned he’d like a Chris-Craft-style boat, so Dave gave him a book on those celebrated craft for Christmas.

Dave was, however, so fascinated by the boats in the book that he quickly borrowed it back to study himself.

“I pored over the pictures and thought wow, these boats are awesome. I was particularly interested in the racing boats … and that was the end of me,” says Dave of his passion for classic wooden boats.

“I started looking for old wooden speedboats. I found one for Paul (see Comanche) and then bought another. Then I started buying just about every boat I could get my hands on. I’ve refined that and now only buy boats with a significant history. I think I’ve got about 25 boats … it’s an addiction – I can’t get it out of my system. I’m a complete victim of it!”

After gaining an Arts degree, Dave began making stained-glass windows, a skill he still uses to produce beautiful works of art. While studying, he worked in a panel shop and began fixing and restoring cars after uni – another skill he continues to exploit for repair and full restoration projects (everything from mechanical to bodywork and painting) of antique cars, boats and bikes.

Some of Dave’s boats have been meticulously restored, some are works in progress, and others are being saved for future projects or simply to prevent them from deteriorating any further. Many have come out of long-term storage or from abandoned restoration efforts. Dave keeps as many as he can in sheds while others are under covers outdoors. It’s a huge ongoing commitment for just one person.

Dave is a founding member of the Classic Australian Wooden Power Boat Association, where enthusiasts work together to save and restore classic wooden boats and preserve their histories. The association holds an annual get-together, which this year will be held on Lake Talbot at Narrandera, NSW, from October 31 to November 1. To find out more, go to: cawpba.com.

Although David Pagano declines to name a favourite from his vast collection, he says Atomic is the boat he likes to drive most. It’s one of many racing hydros built in Australia during the 1950s to ‘60s to a design by the famous American hydro specialist Ted Jones.

Atomic was built in 1958. The 17.5ft (5.33m) classically styled rear-seat hydro raced successfully under various names and with various engines before it was parked in a Port Adelaide backyard.

Dave bought it in 1998 and undertook a restoration program that included designing a bright new colour scheme based on pre-World War II American fighter planes. Progressively improving the hardware and eventually installing a 5lt Holden V8, Dave has successfully raced Atomic on numerous occasions. Running reliably at speeds over 100mph (160km/h), Atomic has even won a Bridge to Bridge race on Sydney’s Hawkesbury River.

Cee Cee is a near-80-year-old vintage boat. Because of its name, Cee Cee was long thought to be an American Chris-Craft but, while styled and built in the same manner as Chris-Crafts from the 1920s, none of the company’s identification marks can be found aboard. Cee Cee is thought to have been built in 1927 in Sydney, as it spent most of its life on and around Sydney Harbour before heading to Queensland.

Dave first learned of Cee Cee in 1992, but nothing transpired until a call from the Gold Coast in 2001 advised the boat was for sale. He asked for a photo to be sent down, took one look and immediately made the purchase.

Some restoration work had been done on the 18ft (5.5m) twin-cockpit craft, and Dave has since repaired the keel, re-varnished the woodwork and added signwriting to the transom.

Although not part of Dave’s collection, this boat was a key element in his fascination for classic boats. Dave was looking at a vintage car some 20 years ago with his brother Paul when they spotted Comanche. Paul liked it so much he bought it, despite its derelict condition that he said “looked like a dead carcass turned upside-down.”

Comanche was built in 1963 in Taren Point, Sydney, by legendary Aussie speedboat builders Frank and Ritchie Lewis. At 17.5ft (5.33m), it’s quite a long boat for the era and boasts a large, open cockpit with the engine covered by a centre-mount type hatch.

When Paul acquired it, he approached Bert Everingham, another legendary Aussie ski- and raceboat builder, to provide the expertise and facilities needed for a restoration project. Construction is maple planking on marine ply frames with spotted gum ribs. The engine is a 350hp Chevrolet V8, which propels Comanche to a top speed of around 60mph (96km/h).

The unlimited hydroplane raceboat Aggressor is perhaps the most historic and outstanding boat in Dave’s collection. It has a fascinating origin and history. It was the only boat built by Dave Tenny, who began building Aggressor in 1961 as a 19-year-old apprentice toolmaker in Melbourne.

Tenny had seen photos of big unlimited hydroplane raceboats in American magazines and, when information from American hydro designers wasn’t forthcoming, designed the boat himself with advice from Errol Jay, who had designed two smaller hydros.

The 2000hp, 27lt Rolls Royce Merlin V12 engine – as used in Spitfire Mk IX aeroplanes – was acquired from disposals, while Tenny designed and built the gearbox, props, and everything else required to complete the boat.

Aggressor was completed in 1964, but it took until 1970 to get it running properly. It was then virtually invincible, winning 10 races from 10 starts in the 1971/72 season, including the Yarrawonga Gold Cup and the Griffith Cup Australasian Championship.

Aggressor was badly damaged in a crash while racing in Sydney’s Hen and Chicken Bay.

Dave Pagano acquired Aggressor in 2000 and restored the deteriorated boat, even sorting out the mighty V12 Merlin engine. When firing it up, Dave says the sound is deafening: “It takes your breath away – knocks your chest around more than your ears … it’s Armageddon!”

He says Aggressor is surprisingly easy to drive. “It’s just like a Cadillac on the freeway – it’s really smooth and runs through rough water and turns with no problems. I raced it in the Top End Sprint from Sackville to Windsor (on Sydney’s Hawkesbury River) over 30km and did that in about 11 minutes. The Merlin wasn’t running at its full potential, but it was still doing over 120mph (193km/h) – Dave Tenny said it’s capable of 170mph (270km/h).”

Two of the best-known wooden boat builders in Sydney were brothers Frank and Ritchie Lewis, who built many speed and ski boats in the 1950s and ‘60s.

F F Sure is a 1968 Lewis Brothers skiff that had a long record of racing success before Dave bought it in 1997 at the Taree Nostalgia Races. He has since restored it and returned the boat to its original appearance.

The red cedar ply deck with silver ash trim looks magnificent. F F Sure is capable of 80mph (129km/h) or more with the 350 Chevrolet that Dave has rebuilt.