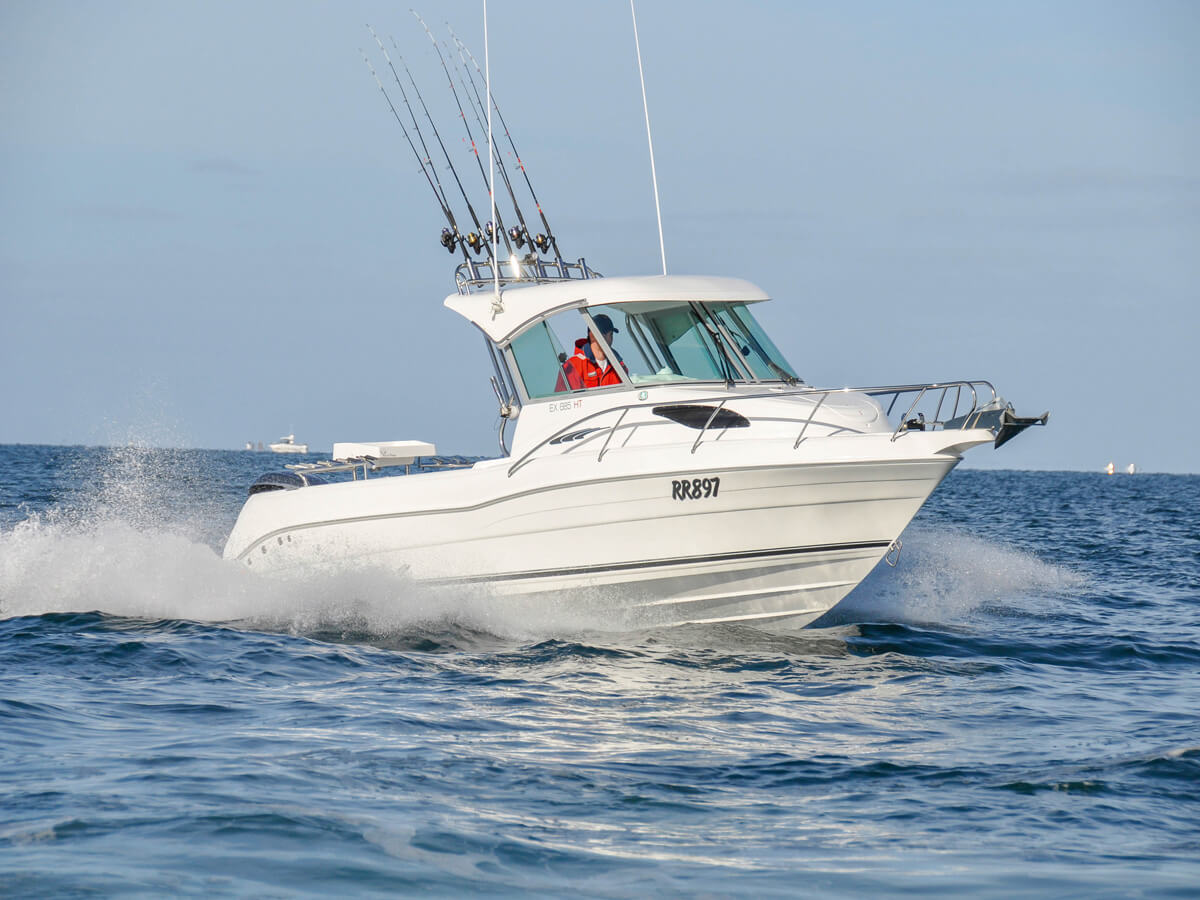 CruiseCrafts run in the family for Melbourne’s McNaughton clan.

Cameron McNaughton is a man on a mission. He is young, mobile and intelligent, and typical of 30-something movers and groovers who know what they want from life and make damned sure they go out and get it. Cam has been raised with saltwater flowing through his veins by father Brian, who has been a lifelong fisherman and boating sportsman. In fact, Brian was the founder of one of Victoria’s largest fishing competitions, the Beaumaris Motor Yacht Squadron’s Annual Gala, as well as being the current Commodore of the club.

The ‘Maccas’ have owned CruiseCrafts for the great majority of their lives. Brian’s old Explorer 570, named Big Mac, was a local icon, however he changed brands briefly after being tempted by a larger cruising boat. The cruiser’s days were short-lived, though, as the pair decided that what they really wanted was a dedicated offshore package with some cruising capability.

The search for a new boat was a lay down misère. They found themselves back at the doors of the Nichols family, who started Brisbane-based CruiseCraft way back in 1949 with “… ten pounds, a push bike, a box of tools and a load of enthusiasm,” according to company patriarch, Kevin Nichols. CruiseCraft is currently into its third generation of family management, with a long reputation for premium boat building.

The timing was terrific. The Maccas saw the benefits of enclosed hardtops and CruiseCraft had just added the option to the already successful 685 Explorer – a marriage made in heaven.

“Once the CruiseCraft hardtop was introduced, the decision to sell our existing boat was a nobrainer,” said Cameron. In fact, Brian and Cameron were so taken with the 685HT that the boat on these pages is actually the second in the family.

Brian bought his first 685HT three years ago because it not only offered the protection of the enclosure, it had a very soft ride and the excellent seagoing abilities typical of a big deep-vee. There was plenty of deck room, high freeboard, a plethora of state-of-the-art fishing amenities – such as large livebait tanks, storage and kill tanks – a lockable V-berth with overnighting facility, and a ton of stability. That’s not to mention that the 685HT is simply stunning nautical eye candy.

The 685HT ticked all the boxes, including towing weight and budget specifications.

“The ability to supply the complete package was very helpful and ensured I’d be on the water upon delivery,” said Cam.

Brian’s first 685HT was so impressive that it quickly became a favourite of many Victorian anglers, especially those who trek to the offshore hunting grounds of south-west Victoria and southern NSW in search of marlin and tuna. Both locations require long runs to the Continental Shelf and Brian says the 685 has always felt 100 per cent safe and confident. Trips of up to 90 to 100km offshore were no issues with 310lt of fuel under the floor.

Three successful years later it was time to update yet again – however it was the next generation’s turn this time around. Cameron worked closely with CruiseCraft and Victorian dealer Streaker Boats to purchase his own dream machine with a host of personally selected fittings and accessories.

The fibreglass hardtop has been updated with an extended rear overhang providing even greater protection, especially for passengers. The extension has a reverse lip, reducing the possibility of overflow into the cockpit and the threat of water down the back of the neck.

We met Cam at Beaumaris in pre-dawn moonlight with the promise of some excitement courtesy of the famous Port Phillip Bay spring snapper run. The new package looked exquisite, with its bright ivory gelcoat shining brilliantly through the darkness as it slid easily off the Easytow aluminium trailer. The Easytow package allowed a significant weight saving over alternative steel trailers.

I jumped in and quickly appreciated the security of the hardtop as we rounded the rock breakwater and opened the throttle for a brisk run to the hot spot. We were snug, warm and comfortable with terrific all-round vision through the curved glass windscreens. A linked pair of Garmin 7410 sounder/ GPS multifunction screens with a B175m through-hull transducer returned a clear bottom reading and direct track to the target area.

This stylish craft has a very large working deck and its deep freeboard embraces occupants with a sense of security. The fishy layout certainly lends itself to serious fishing action.

I love the comfort of big fibreglass deep-vees. The 685HT not only tames the constant spine-splintering slop of our large bays and estuaries, but the smoothly finished surfaces make moving around easy and comfortable. The big, fuel-efficient 300hp Yammy four-stroke is confidence-inspiring, with its gentle, smokeless murmur down low and exhilarating performance when you plant the throttle.

The Garmin colour depth sounder clearly identified our big red prey with discernable arches glowing off the bright screen. Port Phillip can be a difficult place to set an anchor, with soft, silty mud often defying a solid mooring, yet the new MMX anchor dug in on first drop from the Lone Star Marine winch.

We southerners set up our boats quite differently to most others, and have spent years perfecting our baitboard and rodholder combinations. Cam used local manufacturer, Reel-A-Peeling, for a tailor-made stainless steel set-up. It features multiple low-angle rodholders with secure 180-degree facility for fishing off the stern. There’s a large fibreglass baitboard, and a hinge joint in the stainless steel so the rear doorway can be utilised without removing the racks.

We had barely struck anchor and dispersed the rods before the first one buckled over with the rod tip almost hitting the water. These early season snapper arrive with the vengeance of saltwater gladiators and fight with similar conviction. Cam subdued the beast after a fierce struggle and it was soon glowing brilliant red against the backdrop of the grey SeaDek flooring. SeaDek looks great, feels terrific underfoot and provides an easily cleaned, non-skid surface, which makes long hours at sea all the more comfortable.

Another rod buckled over, then another, and Cam was like the proverbial one-armed wallpaper hanger. One fish stayed connected with the rod still in its holder while Cam battled another to the net. By the time he got to the tethered rod the snapper had run up and around the anchor rope so Cam demonstrated his agility by slipping around the side decks to clear the fish, which was quickly in the landing net.

Success! Not only did we get the opportunity to meet Cam and his new CruiseCraft 685HT, with all its premium accessories, we also returned with a bag full of big reds. Denizens of the deep beware: this serious offshore canyon runner is rigged, ready and able, with a canny young skipper at the helm.