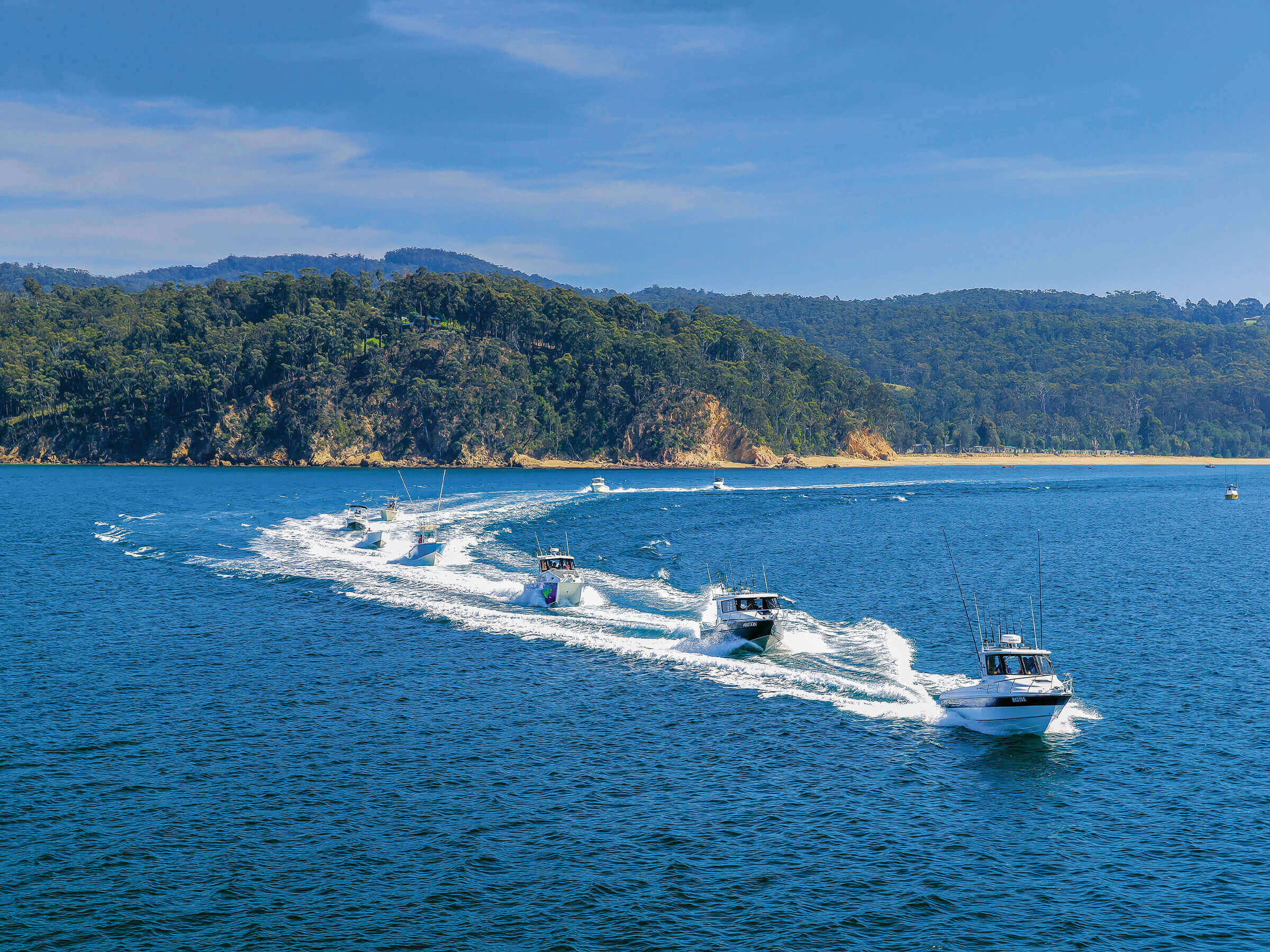 It may not have been an invasion, but we were on a mission
Club Marine and Trade-a-Boat joined forces to select Australia’s greatest trailerable fishing boats.

The good folks of the quiet coastal hamlet of Eden, on the southern NSW Sapphire Coast, might well have been forgiven for thinking an invasion of some sort was taking place in late October, 2016. Carloads of strangers seemed to be casing the joint, taking photos of various bits and pieces, while an unseasonably large number of trailerboaters were pulling into town.

There was also something odd going on down at the boat ramp. Serious blokes with clipboards were marching this way and that, accompanied by video crews – every now and then one would jump on a boat, before heading out into the bay, only to reappear a little while later.

Out on the water, fleets of boats were driving in formation this way and that, and then a chopper joined proceedings, shadowing the boats as they crisscrossed Twofold Bay.

Something was definitely up, but it wasn’t quite as unusual as it may have seemed to the casual observer.

Trade-a-Boat magazine’s Australia’s Greatest Boats show had arrived in town, along with major sponsor Club Marine. In fact, I was actually part of the show, having been invited to attend on behalf of Club Marine Magazine and its 92,000-plus readers. Even better, I was a guest judge and would get to sample every one of the 10 outstanding boats that had been invited to participate in AGB 2016.

It may not have been an invasion, but we were on a mission. The aim sounded simple enough: identify the top alloy and fibreglass trailerable fishing boats available on the Australian market for 2016.

Most of the hard work had already been done before I arrived in Eden. Over the previous 12 months, Trade-a-Boat had tested the boats and culled both the alloy and ‘glass boats down to fields of five in their respective categories.

The idea was now to work through all 10 craft over the next three days to sort out an overall winner in each category.

Backing us up was a crew of expert video and photographic folk assembled from TAB’s publisher, Bauer Media.

In addition, of course, we had the entrants and their boats, some of which had come a long way to be a part of AGB, including one European boat, one Kiwi craft, and three American boats. The main qualifying criteria was that they had to be available in Australia.

Each judge was required to spend around an hour on each boat, inspecting its internals and externals before heading out into the bay to see how it handled itself where it counts. We judged in isolation, so no two judges were on the same boat at the same time. Entrants were given detailed briefings prior to AGB on what judges would be looking for so they could come suitably prepared.

Judges, including ‘rookies’ Starlo and myself, were provided with detailed judging sheets that enabled us to focus on a strict set of criteria, based on the TAB magazine testing format.

With the AGB process having been fine-tuned since the awards were first run in 2010, I was confident that the formula was tried-and-proven. And speaking with several of the entrants, it was obvious that there was a high degree of respect for, and confidence in, the process.

We allocated points out of 10 for: Suitability for intended fishing purpose; Innovation; Design/ layout and appearance; Quality of finish; Handling and ride; Stability at rest; Ergonomics; Standard equipment including safety features; Value for money and X-factor.

After a spell on a boat, we answered the video casting call in which we stood in front of a camera crew and were asked to evaluate the boat for the record.

And speaking of video, we also participated in a few formation runs out on the bay with the chopper recording everything from overhead. In addition, each boat got to strut its stuff for a boat-based camera crew.

At times, the whole exercise felt a bit like some kind of boat-flavoured Hollywood epic, with early starts and late finishes each day.

But in the end, we handed over our scoring sheets to the guy whose fault the whole exercise was, and Mr van Duyl spent the next couple of weeks keeping the judges and entrants in suspense while he compiled the individual scores.

Having been involved in a few boating awards processes over the years, including AMIF’s now deceased Boat of the Year awards and New Zealand’s Hutchwilco Boat Show awards, I have to say that I was very, very impressed with the whole AGB program.

Tim and his crew have the whole process pretty well refined and the judging criteria and formula ensure that the process is rigorous, fair and transparent. More importantly, I believe the process delivers worthy winners … although, as Tim himself says, all the boats involved, by virtue of being invited to AGB, have already enjoyed a high degree of acknowledgement for their quality and excellence.

This year’s field was incredibly diverse, reflecting all manner of configurations, formats, sizes, layouts and applications. We had small cuddies, hardy centre and side consoles, rugged offshore fishers, catamarans and stylish semi-luxury hardtops.

Having spent time on all the entrants, I have a few observations to share.

The first is the high level of quality in manufacturing and fitout that was evident across nearly all craft. Whether imports or local boats, it was almost impossible to find any serious fault, and this was reflected in the closeness of the scoring sheets handed in by all five judges.

The dedication by entrants/manufacturers to deliver the best possible product to the market was also evident. As representatives from each marque took us through their boats, it was obvious that a lot of effort and thought had gone into trying to maximise space, utility, comfort and fishability in every boat. Just when I thought I’d seen the best possible fishing cockpit layout, the next boat seemed to outshine it with more clever innovations.

But the overriding impression I’m left with is how fortunate boaters are in this wide brown land, given the enormous selection of quality boats available to us, delivered by manufacturers with world-class skills and expertise.

For the record, Sailfish’s S8 headed the fleet in the alloy section, giving the company back-to-back AGB gongs, having won the 2015 aluminium award for its S7. Judges were mostly impressed by the S8’s soft-riding and flat-turning hulls, stability, level of creature comforts, styling, fishing-friendly deck layout, degree of protection and overall performance. As judge John Ford commented: “There’s nothing missing to make this the perfect fishing platform.” Kevin Smith concurred: “You can’t not like it. Uncompromised stability that’s typical of big cats.”

Of the fibreglass contenders, the big American Mako 234CC out-pointed the field, with judges competing for superlatives.

“This boat goes all the way to 11,” raved John Ford. “Sensational and thrilling, fast and safe, plus an amazing ride.”

And Steve Starling: “Visually stunning and well laid out with great access.”

Personally, I found it hard to find fault with the Mako as far as a fishing package goes. It had great fishability, excellent fit and finish, plus it was the star performer in terms of ride and outright pace from its twin 150 Mercurys. At a tad over 7m (23ft), it was also judged great value for money, with a price tag of $149,000.

Both were worthy winners, but there was one other craft that really grabbed my attention during AGB. It was another American open layout centre console, but slightly smaller than the Mako with a hull length of 19.4ft (5.9m).

The Scout 195 Sportfish was simply one helluva fun boat by virtue of its agility and amazing ride and performance. Also backed by a Merc – a single 150hp four-stroke – the Scout won over the judges for its versatility, attention to detail and comfort touches. Basically, it’s a very clever boat that delivers great fishing practicality with daytripper comfort and style.

“This is a beautifully finished and very classy package,” commented Starling.

As the man behind AGB, we’ll leave the last comments on this year’s efforts to Tim van Duyl.

“All of the boats were winners for making it through the AGB process,” said Tim. “In particular what stood out for me was the high attention to detail overall, reflecting a strong desire to win. All entrants really put their hearts and souls into it.

“I also want to very sincerely express our appreciation to Club Marine for its support of the trailerboat market and industry. AGB really was a massive effort and we simply couldn’t have done it without Club Marine.”

To see all the AGB action, go to: tradeboats.com.au.

Located on the NSW south coast just north of the Victorian border, Eden opens its arms to trailerboaters, with great facilities, accommodation and dining options to cater to all tastes.

Formerly a hub for the whaling industry, these days it plays host to pods of migrating whales of various species, while also boasting its own Killer Whale Museum, built to showcase the history of the local industry and in particular to share the great tale of Old Tom, a killer whale that actually assisted whalers in rounding up pods of humpbacks and other species for slaughter. Remnants of one of the local whale processing centres also survive on the southern shore of Twofold Bay.

There are also plenty of other historic and natural attractions to keep visitors entertained and absorbed, when not out on the water.

But from a boating point of view, Eden is primarily known as a welcoming spot for anglers, with a rich bounty of options on offer, including offshore pelagics such as yellowfin and southern bluefin tuna, while marlin are also caught around the nearby continental shelf.

Trailerboaters will appreciate the clean and modern launching facilities at Quarantine Bay, just five minutes from the centre of town, while larger craft can be accommodated at nearby Snug Cove, which is also home to restaurants, fuel supplies, chandleries and engineering facilities.

During our time in Eden, we were hosted at the Sapphire Sun Eco Holiday Village, located within casting distance of Quarantine Bay. Managed by the friendly and helpful Jason and Nicole, the campground has options from well-appointed cabins to regular powered camp sites and is a well-maintained and welcoming spot for travelling trailerboaters.

Jason, in particular, is tapped into the local fishing community and knows where they’re biting and when.

For more information, go to: sapphiresun.com.au.