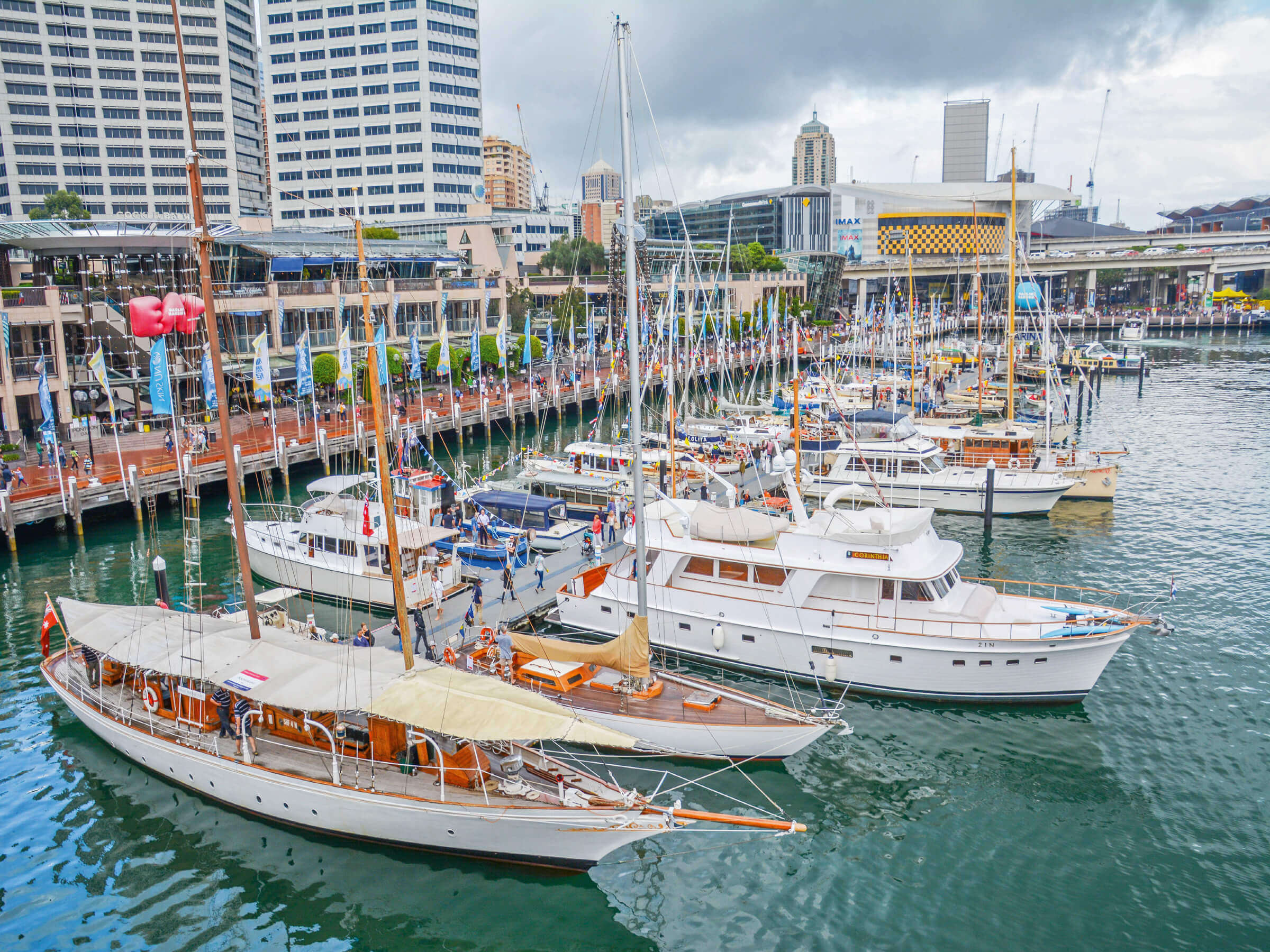 Classic and wooden boat enthusiasts flocked to Sydney to see a fleet of elegant and historic craft in all their finery.

Back for 2016, the biennial Classic and Wooden Boat Festival was held at the National Maritime Museum on Sydney’s Darling Harbour and attracted large crowds across the weekend of April 15 to 17.

A fleet of classic vessels was on show in berths outside the museum and on Cockle Bay, with a ferry service running between the two locations. While it isn’t far to walk between the two marinas, hopping aboard the classic ferry Harman – part of the Sydney Heritage Fleet – was a delight not to be missed, including the interesting commentary. The famous steam launch Lady Hopetoun, built in 1902 for Vice-Regal and VIP use and likewise a Heritage Fleet member, was also available for rides around the bay.

An entire marina arm was taken up by the Halvorsen Club, which had a meritorious collection of those glorious wooden classics. Many more classic and wooden vessels – including sail and power, recreational, race and commercial – were displayed, both on the water and ashore.

Lynda Kelly, Head of Learning at the Australian National Maritime Museum, Sydney, is the festival’s organiser. Kelly said after the last Sydney Classic and Wooden Festival in 2012, it was felt that more consultation with boat owners and clubs was needed. While the festival was skipped in 2014, it is back on its biennial track and running in conjunction with Hobart’s alternate-year event, which will next be held from February 10 to 13, 2017.

“We really wanted to work closely with the boat owners and bring a more professional element to the festival, so this year we’re running symposia and talks,” said Kelly. “We also expanded into Cockle Bay and Wharf 7 so we’d have space for everyone and their boats. We have about 135 boats this year.

“Another element sees us working with the NSW Department of Education, which is doing a canoe-building challenge for youngsters studying that as part of their HSC curriculum.

“The Museum is going into its 25th year after starting as a bicentenary project. We have a marvellous collection, which includes a floating display … something many maritime museums are not able to have. We also have a large collection of maritime art, as well as indigenous and naval items, and even a vintage swimwear collection.

“Our next Festival, in 2018, will have an indigenous theme, while the 2020 event will commemorate when Captain Cook first sailed to Australia,” she said.

For more information, go to: anmm.gov.au.

The 18ft (5.5m) Halvorsen launch Miss Ally was commissioned by Claude Fay and launched in April 1948. It was sold out of his estate to Lord Howe Island and became unseaworthy in the mid-1990s. Miss Ally was shipped to Gold Coast boatbuilders David and Bill Griffiths and, as the cost of restoration was more than the then-owner was prepared to pay, it was essentially gifted to the Griffiths. They partially restored the hull and interior before current owners, David and Alison Crane, saw it when the launch was being sold in the mid-2000s.

“I said to Alison that this was an opportunity not to be missed,” said David Crane. “To clinch the deal, I promised Alison we’d rename her Miss Ally!” David and friend, Tim Gresham, towed the boat back to Pacific Palms and have been working on the restoration ever since. The interior has Pacific maple cabinet work and a white beech sole. The engine, the launch’s third, is a marinised, ex-tractor Kubota that pushes the boat along at eight knots. At that speed, it doesn’t need NSW registration, but David did so anyway to claim the almost-Halvorsen registration of HVORSEN.

Gresham designed and built a much-improved trailer that enables easy launching and retrieving. Originally the boat was named Sea Eff (as a play on Claude Fay’s initials) before being named Susie. But now the beautiful clinker Halvorsen proudly displays Miss Ally, as promised.

Maris is a Tasman Seabird that was built for Jack Earl by Jock Muir at Battery Point in 1958, of Huon pine with a yawl rig. Over the decades, Maris has raced in many Sydney Hobart Yacht Races and has cruised extensively. Owned and raced by Ian Kiernan for many years, she is now owned by Jack’s grand-daughter Tiare Tomaszewski and Lord Howe Island resident, John Green.

“The boat was named by my grandfather for my mother and I’ve owned Maris for about 10 years,” said Tiare (Hawaiian for ‘beautiful flower’). “Ian Kiernan had owned her since my grandfather sold her in 1971. Later, he called my brother, offering a partnership, which he accepted in conjunction with John Green. Later still, I joined in a four-way partnership, but these days I own two-thirds and John has one-third.”

The 37ft Tasman Seabirds were designed by Alan Payne and all varied slightly to suit individual owners. Maris was one of the first to be built.

“My uncle Mick Earl helped with the construction. Maris has won two Lord Howe races overall on IRC rating, and that was on her 50th birthday. It’s thought she is the oldest boat to win a Cat 1 race on IRC – that was a nice birthday present,” Tiare said.

“I keep her on a mooring in Mosman Bay that’s only 40m from the original 1959 mooring. She is a pretty special boat and it’s lovely to have such a significant piece of family history back in the family.

Peter and Robyn Selge own the glorious 40ft (12.2m) Halvorsen Flybridge Cruiser Kirribilli, which was launched on July 13, 1967 to be Carl Halvorsen’s family boat until 1988. After a second owner, Peter and Robyn purchased Kirribilli around five years ago to upgrade from a 30ft Halvorsen.

The boat is capable of 25 knots, with twin V8 MerCruiser 454s for power. These were installed in 1989 to replace the original Chrysler V8s.

“Kirribilli sleeps four comfortably and has the galley-up layout, which we prefer,” said Peter.

“I love using it to get out on the water to relax,” said Robyn. “It’s perfect for taking overseas and interstate visitors out on Pittwater and along to Towlers Bay and The Basin, or around to America Bay. It’s just such a comfortable family boat for us to have the kids onboard with their friends … there’s enough room for everyone. We have a couple of kayaks for the kids to head off with to explore the shores, or you can sit here and have a candle-lit dinner.”

A fleet of Halvorsen cruisers and yachts was impressively arrayed around their own marina arm during the Classic and Wooden Boat Festival. Tony Mackay, a Commodore of the Halvorsen Club for many years and a font of knowledge on the company, its history and its boats, was on hand during the festival.

“The Halvorsen Club is going well, with like-minded people coming together for social events and to share thoughts about restoration and renovation,” said Mackay.

“We have about 130 boats in the club around Australia and 17 are here at the festival. We organised a good selection that covers most types, such as cruisers of various lengths, a 32 Viking, three bridge-deck cruisers up to 54ft, a 38ft yacht, four V-bottom cruisers and the 48ft cruiser Aquitania, which is for sale at present. On the hardstand we also have the 18ft launch Miss Ally.

“This festival brings a lot of Halvorsen-minded people out of the woodwork to come and say hello.”