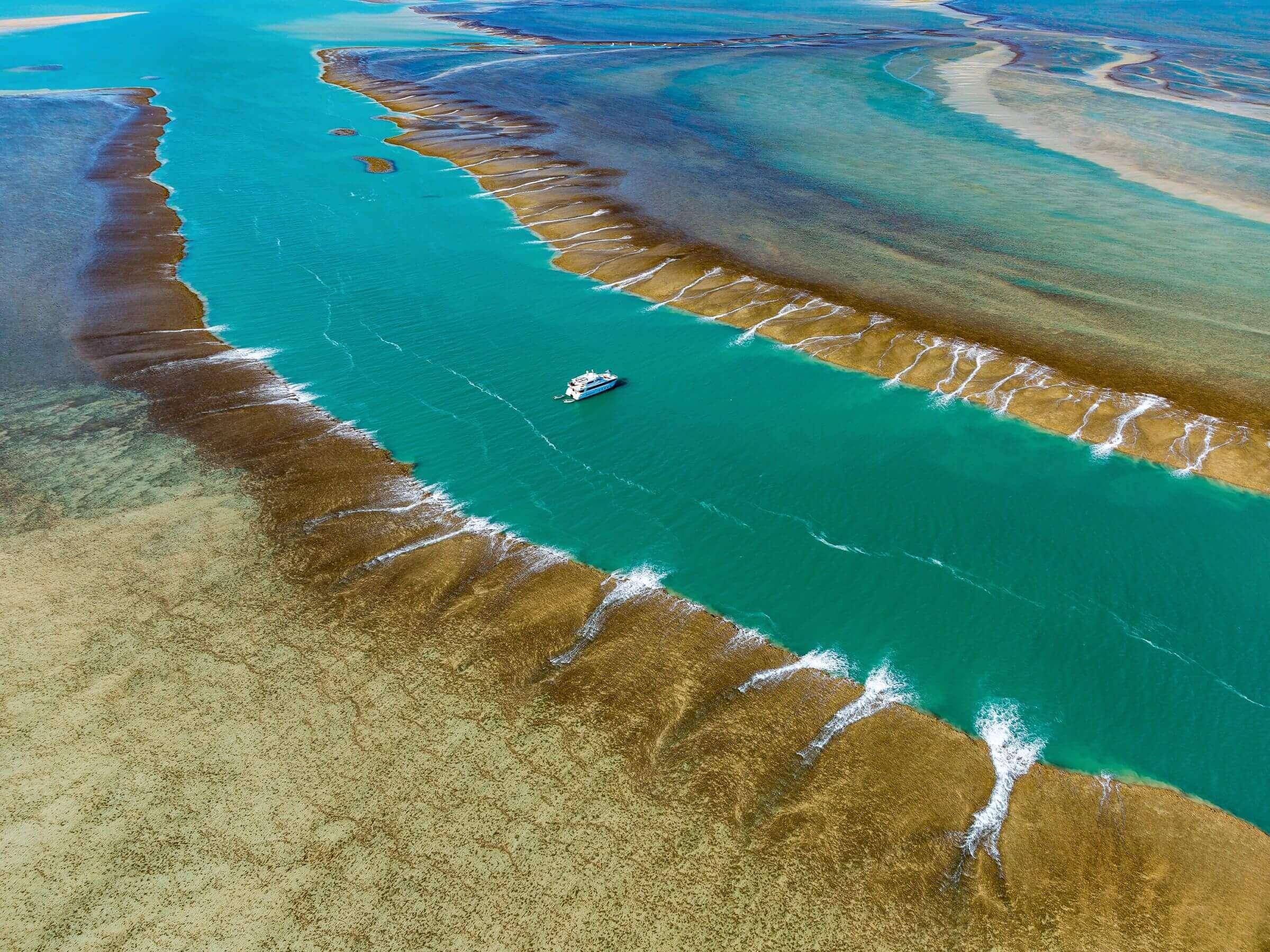 Magnificent by boat and awe-inspiring from the air, the 400sq km Montgomery Reef rises from the water in low tide to reveal thousands of cascades and deep, navigable trenches begging to be explored
Western Australia’s Kimberley region is a spectacular, ancient land that abounds with natural wonders.

The Kimberley coast is as harsh and untamed as it is beautiful and remains broadly inaccessible to most. Exploring the Kimberley coast has been a life-long dream of mine and I recently spent a week living out this fantasy while cruising from Mitchell Plateau to Broome aboard Great Escape.

Cruising with only 11 guests and seven crew aboard The Great Escape Charter Company’s 26m luxury catamaran is very different to a typical cruise ship experience – it’s more like spending a week with a group of friends. The experience is a bespoke creation of the highly experienced and professional crew who have spent decades working and exploring this amazing part of the world.

Cruising on a smaller vessel meant we could get far upriver and into the tight nooks and beautiful spots that larger ships cannot access. Getting further afield was a daily adventure in the helicopter that parked on the roof, or on one of the three tenders in tow.

Fishing the Kimberley usually means targeting barramundi. Our guides, Clive and Jeremy, had us bait-casting lures with precision and landing spectacular barra right past the noses of a few lazy saltwater crocodiles that are abundant in the calm waters. Freshly caught barra, mud crab and mangrove Jack were prepared daily by our chef.

Flying and hiking into waterfall-fed billabongs miles from anywhere for a midday swim was fantastic. Having a helicopter on hand added so much to the trip, and exploring the sites in the chopper (with the doors removed for a better view) was hard to beat.

Montgomery Reef has to be seen to be believed. Located about 12nm off the central Kimberley coast, it covers 400sq km, making it Australia’s largest inshore reef. It is completely dominated by extreme tidal flow. As the low tide sets in, the reef appears to rise up from the ocean, with the coral producing a gel-like emulsion to protect itself from the sun and elements. As the water recedes, the ocean rushes from the surface of the reef, resulting in deep channels. As the water pulls back with the tide, countless cascades flow off the reef. Flying at high altitude provided a view never to be forgotten.

The greatest demonstration of Kimberley tidal power is at Horizontal Falls. When the tide recedes, enormous bodies of water mound up, as the route back to the ocean is constrained to two narrow gaps between cliffs – resulting in the appearance of a horizontal waterfall.

After leaving Prince Regent River and heading offshore, we left the mothership to enjoy a barbecue on a sandy cay that only appears for a few hours at low tide. With a dinghy full of firewood, we watched as the island appeared out of the depths right in front of us. After dinner and a bonfire, we departed as the island was retaken by the incoming tide, erasing any trace that we were there.

Witnessing the perfectly preserved indigenous rock art for the first time is overwhelming. Crew member Liz is a qualified archaeologist and anthropologist specialising in Kimberley prehistory. We visited a number of these sites on the trip, helicoptering in to view what was created many thousands of years ago. While we stood quietly to absorb the ancient works in front of us, a large, lone dingo passed by and paused for a moment to observe us … just another memorable moment from an unforgettable trip.