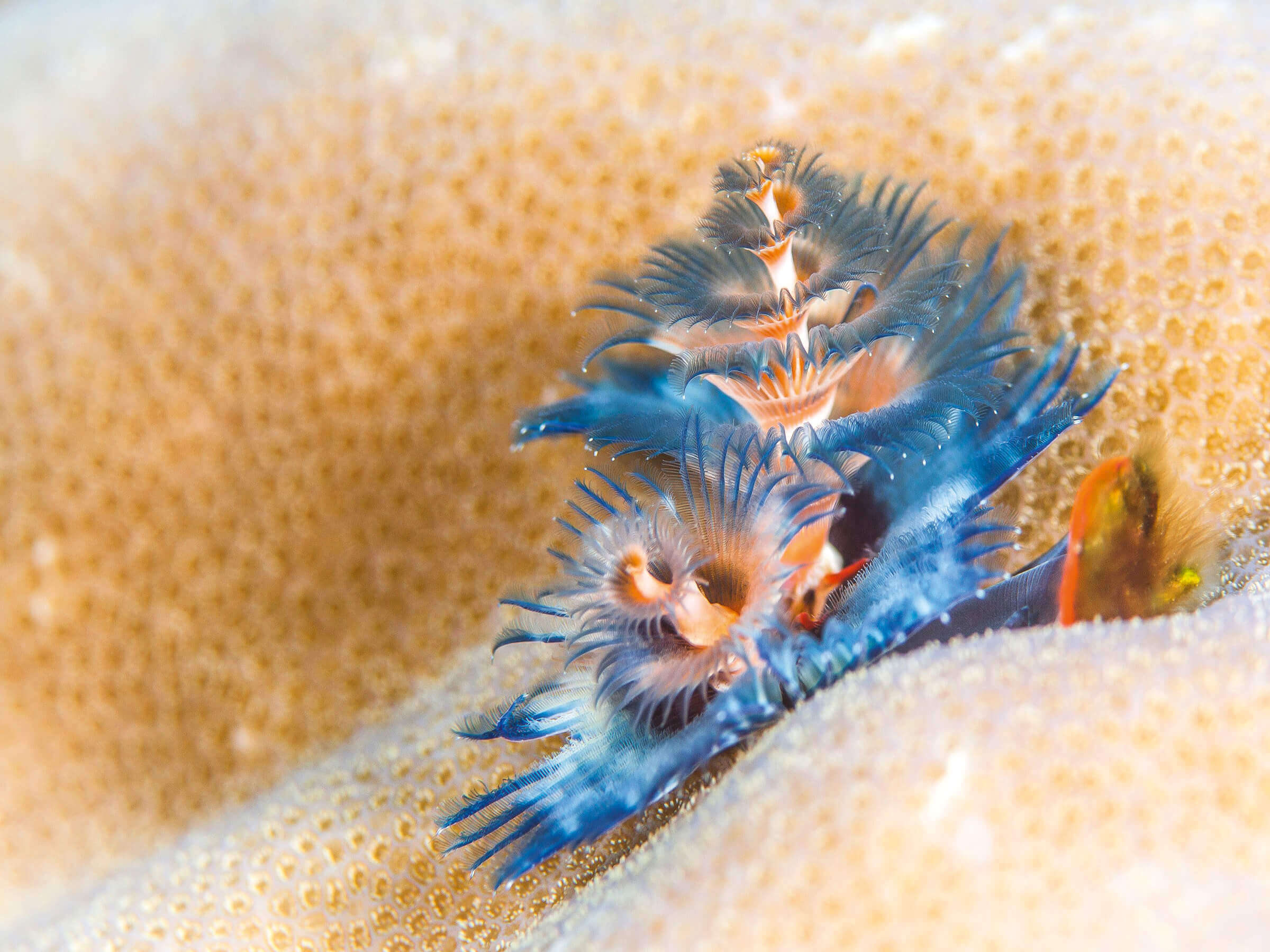 The longer one spends observing the astounding richness of life surrounding a coral reef, the harder it is to ignore the dazzling and varied designs of the humble, one-inch-high marine polychaete known as the Christmas tree worm.

Resembling the whorled form of twin Christmas trees, these colourful critters adorn living coral colonies throughout the warm oceans of the world.

What one sees of the animal is its paired feeding and breathing apparatus (known as radioles) on display in an endless array of colours and patterns – from ruby reds, saffron yellows and emerald greens, to luscious lavenders, pretty pinks and soft baby blues. The radioles unfurl into the water current, absorbing life-giving oxygen as well as microscopic planktonic prey that is trapped within the structure’s feathery filter.

A scuttling crab, the scraping of a parrotfish’s beak or the wave of a snorkeler’s hand over a forest of Christmas tree worms causes a ‘Mexican wave’ as they rapidly retreat, pulling their radioles back inside their calcareous tubes and closing their operculum doors to potential danger. After a few seconds, the worm slowly re-emerges, gradually extending its flamboyant filter back out into the open.

Once hatched from the egg, life for a Christmas tree worm begins as a translucent speck drifting in the planktonic conveyor belt of tropical ocean water. Having survived the depredation and vulnerability of this free-floating phase of its development – which may last a few hours to several weeks – the larval worm eventually reaches ‘puberty’ and finds a suitable home to begin life as a fully fledged member of the benthos.

The chemical information given out by a healthy, living coral reef is packed with biological information and, by analysing this milieu, the polychaete larva decides what to aim for upon its descent, notwithstanding hydrological influences.

With some self-determination and a healthy dose of luck, the larva alights upon its desired species of living coral, where others of its kind may already be in residence. Upon landing, it undergoes a dramatic morphological and physiological transformation into its sedentary adult form and begins burrowing into the skeleton of its live coral host. Using a mixture of mucus and digested calcium carbonate, the worm creates a protective tube up to 20cm in length, within which it may reside for up to 30 years.

Until recently thought to belong to just one species, Spirobranchus giganteus, polychaete biologists now believe that this collection of beguiling invertebrates probably represents numerous different species, each with a preference for their own specific environmental conditions. Studies assessing recruitment criteria of these humble homemakers indicate that it is the presence of conspecifics (a member of the same species) that seems to be more important than the kind of coral upon which they all live. Why? Well, it’s savvy to reside within a close-knit community, for when it comes time to release sperm into the water, it pays to have your mate living next door.

Christmas tree worms may be small, but there’s hardly a diver or snorkeler who doesn’t have a soft spot for this colourful critter.