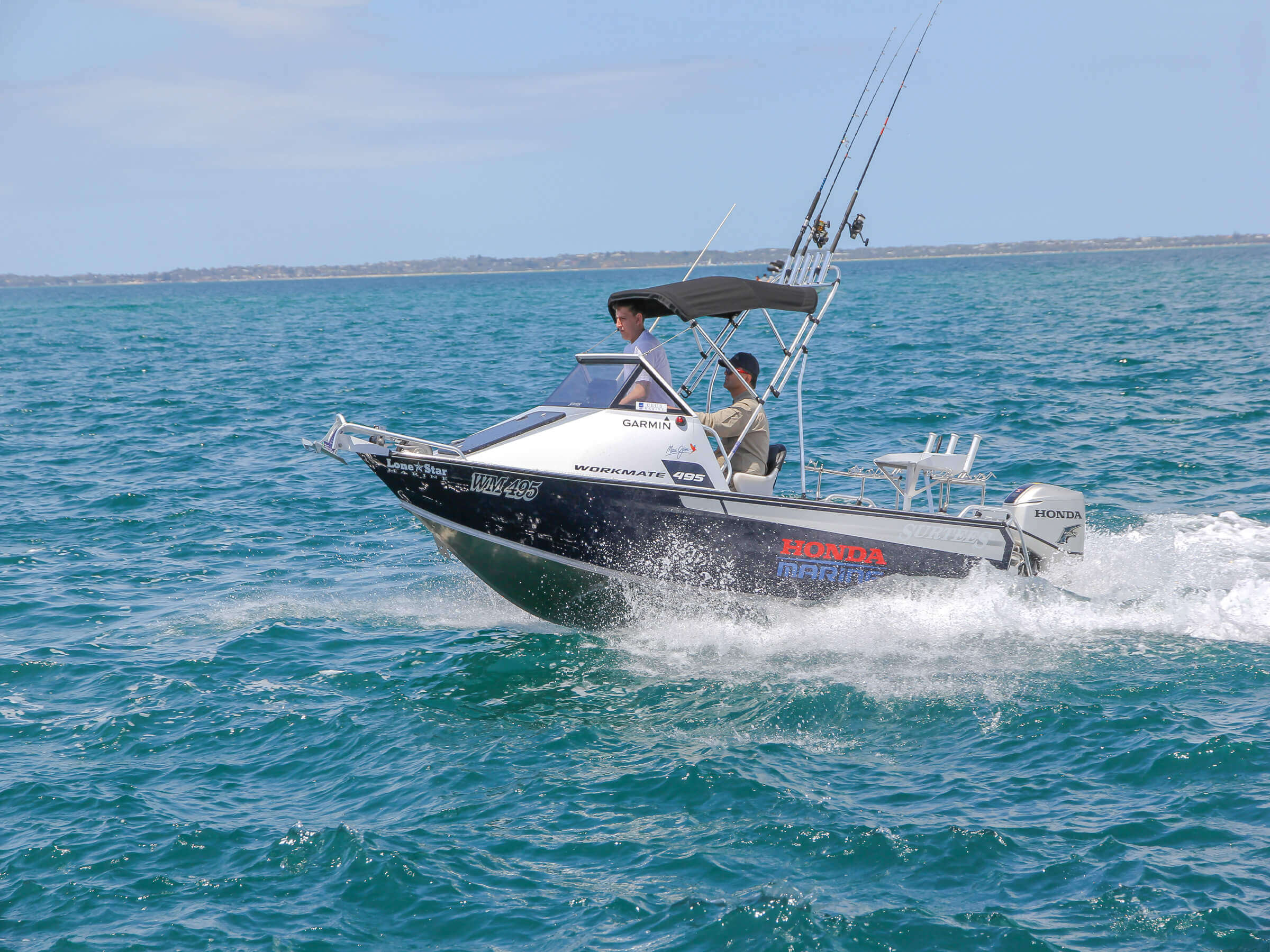 The 495, like all Surtees, benefits from the company’s innovative Anti-Roll Stability Ballast system
Kiwi boat builder Surtees packs a lot of fishing-friendly features into its compact 495 Workmate.

Surtees’s 495 Workmate seems like a bigger boat that has been shrunk a couple of sizes. A fat 2m beam accentuates the effect in a boat that is just 4.95m in length. It is a compact craft, offering many features and functions that you’d normally expect to find in a bigger boat.

We picked up our test craft from MY Marine, at Dromana on Melbourne’s Mornington Peninsula. Theo Rozakis, who runs the business along with his brother Michael, ran us through the various selling points of the Kiwi-built pocket rocket. Theo’s enthusiasm for the brand and model was obvious – even more so, considering the test boat is his own personal craft and gets plenty of workouts on Melbourne’s unpredictable Port Phillip Bay.

“It actually took me a while to get the boat because, every time I ordered one, a customer ended up with it. They’re a very popular model,” he said.

Theo’s boat has, not surprisingly, seen a lot of options and extras boxes ticked, including a Lonestar electric winch, 7in Garmin touchscreen sounder/GPS, livebait tank, Fusion iPod dock, snapper racks and a deck-wash. Basically, it’s been set up as a dedicated fisher to make a day stalking snapper, whiting or squid out on the bay as easy and convenient as possible.

Theo explained that the 495 is an update on the previous smallest boat in the Surtees range, the 485 Workmate.

“They’ve made the cockpit roomier by moving the transom back 100mm, so there’s more room to fish,” he explained. “The transom change also allowed for a taller removable baitboard to be used, which will be welcomed by fishos.”

The 495, like all Surtees, benefits from the company’s innovative Anti-Roll Stability Ballast system, which employs a cavity that runs the full length of the keel. On the 495 it has a capacity of 180lt and fills up with water whenever the boat is at rest. It thus lowers the boat’s centre of gravity, substantially improving stability. There is also a flap at the rear of the cavity that can be activated by a simple rope-pull system to keep the water inside when underway in rough conditions to improve the ride.

Certainly our experience on the day supports the argument that the system enhances stability. With three medium-sized adults aboard, the Workmate was impressively stable for an under-five-metre craft.

The hull itself is a sturdy affair, combining a 4mm bottom with 3mm sides. It’s based on a full-length, fully welded stringer system, including two longitudinal buoyancy chambers beneath the checkerboard floor. It’s all built to European CE Certification standards and the hull comes with a 10-year warranty.

At the back is a pair of solid boarding platforms either side of the engine pod which, on our boat, supported a 60hp Honda. There’s also a boarding ladder and sturdy grabrails.

The transom is uncluttered and is dominated by a removable Surtees baitboard. On our boat, the transom also incorporated a plumbed livebait tank. As far as maintenance goes, everything, including the battery, fuel filter and bilge, is easy to access.

Peeling back the rubber matting reveals a relatively shallow central kill tank. I’d think it would need to be augmented by an esky for most outings.

The gunwales are wide and supportive, although they’re about as low as you’d want to go when fishing. There are rodholders everwhere and generous stowage in the coaming parcel shelves on both sides.

The helm is a simple, uncluttered affair, with a full-width carpeted parcel shelf and a solid grab bar. Visibility is excellent, while protection from the elements is enhanced with the combined bimini and rocket launcher rod rack.

The 495 isn’t the driest boat in a chop, though, with the low screen not helping when it comes to the occupants getting a spray from time to time via the deep-vee hull.

From a practical point of view, the open and compact cabin is a great place to keep everything out of the way for the serious business of fishing, and it does have a hatch in the event you don’t opt for an electric anchor winch as fitted to the test craft. The bungee cord lifejacket holders running along the sides of the parcel shelves are a clever, yet simple, touch.

Underway, the 495 is a nimble little boat. It responds quickly and predictably to the helm and the ride is in keeping with most modern Kiwi alloy boats in that it absorbs wave-shock well, especially for a boat of its size. I’d characterise the ride in the almost one-metre chop we encountered as firm, though not too harsh.

While the 60hp Honda was certainly up to the challenge of pushing the 735kg dry weight of the Surtees along at a respectable 32.4 knots (60km/h) on wide open throttle, it did take a while to achieve plane with three adults aboard and I’d be inclined to consider exploiting the recommended maximum power limit of 75hp.

As far as an affordable (base price is set at $37,990), easy to operate fishing craft goes, the Surtees 495 Workmate is hard to fault. It’s a robust, tough and surprisingly roomy little boat that can accommodate four anglers without discomfort – and I’d think even longer offshore expeditions wouldn’t be out of the question. Maintenance and cleaning are fuss-free due to the open cockpit and cabin layout.

Overall, it’s a well-presented, honest and well-finished aluminium craft, built by people who clearly know a thing or two about what serious anglers look for in a boat.