Bass on the boil 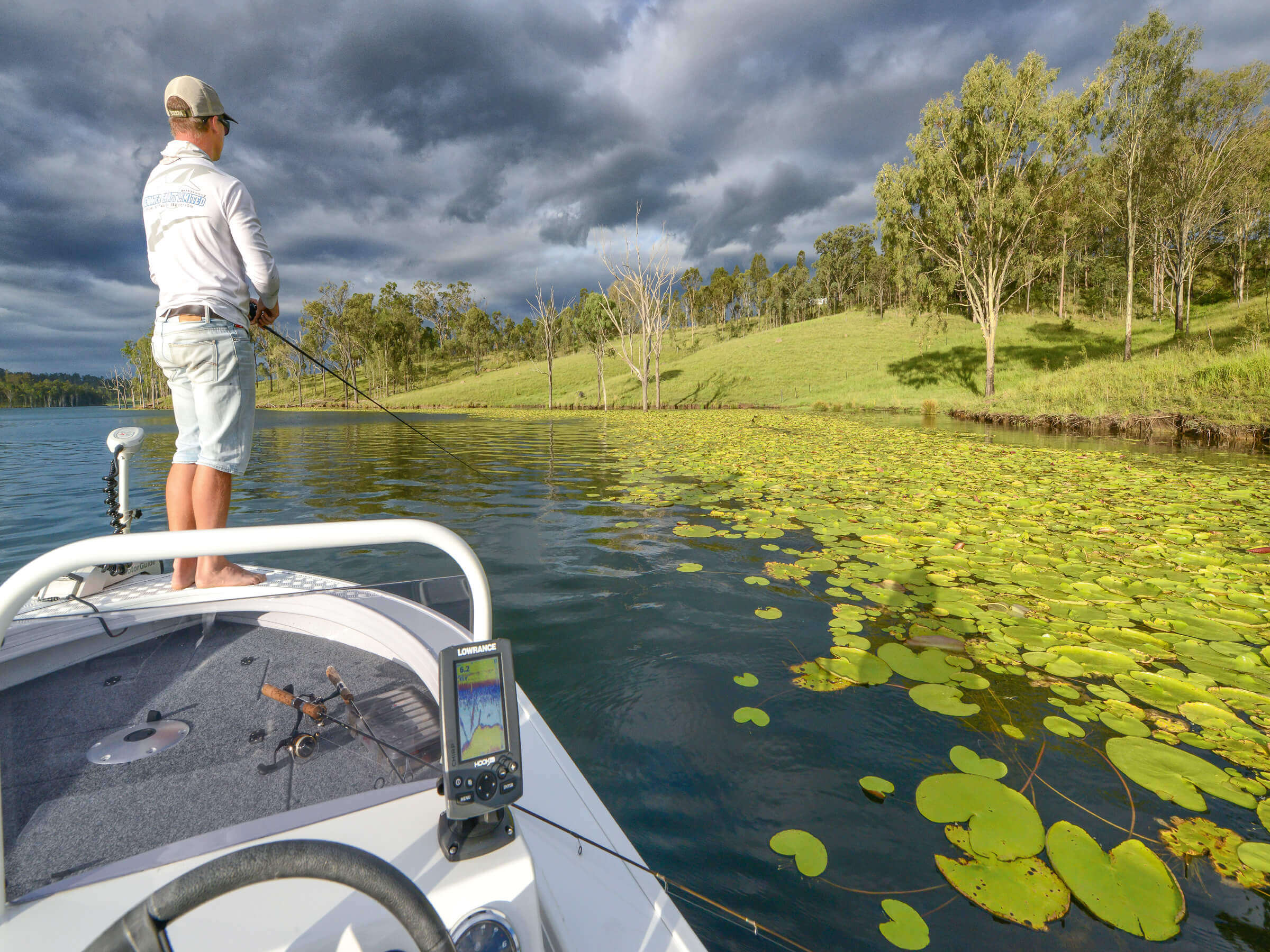 You can be on the water and fishing at Maroon Lake 90 minutes after leaving Brisbane.
Only a short drive from Brisbane, Moogerah and Maroon lakes offer dawn-to-dusk bass action.

Less than 100km and a little over an hour’s drive from Brisbane’s CBD is the country town of Boonah. Boasting the big four necessities of a road trip – food, fuel, accommodation and pubs – it’s an ideal base for exploring Maroon and Moogerah lakes, especially if you’re not within day-tripping distance.

Boonah and the two lakes are nestled under the Scenic Rim, which is an all-encompassing name for the caldera-like edge of the Great Dividing Range. Punctuated by Cunningham’s Gap, where the road from Ipswich to Warwick snakes through a low-point, the vista really does create an amphitheatre as a backdrop to these eminently accessible lakes.

Note that if you are chasing true, trophy-sized bass, then these aren’t the lakes for you – instead, travel to the north-west of Brisbane to Somerset and Wivenhoe lakes in the Brisbane Valley. Maroon and Moogerah are famous for smaller fish, and lots of them. Your chances of catching a bass at Maroon and Moogerah are much higher than its notoriously difficult bigger brothers 100km away.

The area is also the birthplace of most major thunderstorms that roll down the river valley to the greater Brisbane area. Moogerah means ‘thunder’ in the Yugarabul language.

From Brisbane, you can take a modern highway to Ipswich (around halfway) and then travel on good-quality, sealed roads to Boonah and the lakes. If you really try, you can find some unsealed roads between the lakes and, at less than 15km apart as the crow flies, it’s not unusual for locals to change impoundments mid-session if the fish aren’t cooperating.

Both lakes have waterside camping available. Moogerah’s is more developed, with plenty of on-site vans and cabins and a small kiosk augmenting the camping experience, while Maroon’s camping is a mix of private venues that offer varying facilities at varying rates.

Trailering a freshwater punt to either location is a piece of cake and both locations have boat ramps suitable for boats of all sizes. Indeed, summertime sees plenty of waterski and wake boats using these waterways. You can avoid these by fishing close to dawn and dusk.

If you are chasing local advice on tackle, drop in at Charlton’s Fishing off the Ipswich Motorway at Redbank Plains. They are in touch with what’s happening at the lakes on a daily basis and can hook you up with the baits or lures to use.

For a long time, south-east Queensland has been a hub of fishing activity for Australian bass. In fact, in the south-east of the state, more than a dozen lakes with ready access are stocked with this iconic Aussie sport fish.

The irony is, however, that Australian bass are related to bass in other parts of the world in the same way as Australian salmon is to the orange fillets you see in the supermarket. Basically, they are uniquely Australian fish with adopted names that don’t help at all when talking to international anglers.

Whoever settled on ‘barramundi’ got it right. Everyone knows what a barra is. Everywhere.

That said, the Aussie bass is a unique fish. They’re good-looking, fairly easy to catch and thrive in the man-made environments where they’re stocked. However, they can’t breed in a freshwater lake – their life cycle is defined by a spawning run to the brackish water of a river, where schools of adult fish create their progeny in roughly one-third-strength seawater. Hence, every bass you find in a lake has been bred in a hatchery and stocked in the lake.

When fishing in a lake in Queensland – Maroon and Moogerah included – it’s necessary to purchase a Stocked Impoundment Permit (SIP). Available online (search: stocked impoundment permit), they cost $10 for a week’s fishing or $50 per annum. Seventy-five per cent of the funds raised from this program are spent directly on fingerlings.

Although less than 15km apart, Moogerah and Maroon have totally different personalities when it comes to habitat and fishing. Maroon is steeper, deeper and nearly permanently lined with water lilies. Bass typically relate to the edges of the lake and the weeds around it.

Maroon is as close as we have in Queensland to a ‘recreational lake’ – there are no massive drawdowns for irrigation or drinking water, so the reasonably stable lake level lets the ecosystems develop to maturity.

Maroon’s forage tends to be small, with native gudgeons, rainbows, mosquito fish and shrimp the focus of the bass’s attention. Terrestrial insects form a part of the diet, too. This means that fishing topwater lures is an exciting way to catch bass in Maroon. This is usually best at dawn, dusk and at night.

Broadly, you could treat Maroon as a ‘casting’ lake, where throwing lures at weed edges and bankside structure can be a very rewarding experience, while Moogerah can be seen as a ‘trolling’ lake, where dragging deep-diving lures along the old creek beds can be a relaxing and productive way to fish.

There’s nothing like arriving at Maroon Lake before the sun rises. It’s ridiculously dark unless there’s a moon in the sky and you can hear all sorts of activity – frogs, crickets … and Australian bass feeding off the surface. As the eastern horizon lightens, you can make out the edges of the weed beds and lilypad fields. This is where you cast your topwater bait.

When it splashes down next to the edge, you leave it for a while, letting the expanding concentric rings dissipate. Five to 10 seconds after splashdown, twitch the topwater a few times and let it pause again.

Bass aren’t subtle when they hit the bait – you’ll know you have a bite when there’s a splashing boil and the line screams off.

When the sun hits the water, bass are less likely to eat off the surface. This is when you change to a jerkbait. The idea is to cast the jerkbait and wind it half a dozen cranks of the reel handle, then let it sit, alternatively twitching it, pausing it and winding it a crank or two. The secret of the retrieve is the pause – bass don’t mind you pausing for a decent period. In summer, it’s a few seconds, but when the water is colder in winter, there’s nothing wrong with letting it sit for 10 or 12 seconds.

By mid-morning, the jerkbait bite usually slows down a little, so it’s time for the soft plastics and jigheads. The idea is to cast soft plastics over concentrations of fish in 15 to 25ft (4.6 to 7.6m) of water. You can find the bass with a fishfinder – they appear as solid dashes or arches on the screen when at idle. Sink the bait to the bottom and commence a slow-wind back to the boat – it should be fast enough to get the paddle-tail on the lure kicking. Bites can be subtle. If you’re constantly getting nipped with no hook-ups, try changing the pace of the retrieve.

In the evenings, the bass tend to be drawn back to the topwater, so it’s back to the lilypads and edges.

There are some great sunken paddocks over towards Camp Lake Fire that fish very well after dark. You can cast in any direction and not worry about snagging the lure and the roaming fish tend to come to you rather than you having to go to them.

The best part of a Maroon night-time bite is when you have a couple of anglers fishing, a bass blasting a bait, and nobody knowing whose bait it is. You just know that there’s a hungry bass hitting and missing somewhere out in the darkness.

Fortunately, when the action slows at Maroon, it’s only a 30-minute shuffle across to Moogerah, which is more basin-like, with some sections of standing timber. Its main fish-holding features are sunken creek beds where fish relate to the changes in depth. The lake level itself is more variable due to the demands of irrigators in the Fassifern Valley.

For an angler, though, the main difference is a native baitfish: the bony bream. There are massive schools of ‘bonies’ in Moogerah, which has an impact on the fishing. It makes the bass bigger, faster-growing, fatter and, importantly, less inclined to hold to the edges of the lake as they roam around in the open water chasing the pelagic schools of bait.

From morning to late afternoon, the best bet at Moogerah is to turn your sounder on and idle around the lake, taking note of the places that the old creek bed meanders across the basin. Often, these changes in depth are where the bass hang out. A deep-diving vibration bait or ‘blade’ is the go here. Simply cast the blade across the area or school and let it sink. Once it hits the bottom, take up the slack and lift the rod tip to ‘hop’ the blade off the bottom.

Bass will usually bite the blade on the drop, not the lift, so be prepared for the hit.

If nothing is visible in open water, head to the upper reaches of the lake and fish amongst the standing dead-timber. A spinnerbait is the best lure for this as, by design, it is very snag resistant. Cast the spinnerbait in the gaps between the trees, let it sink and slow-wind it back to the boat. You don’t need to impart much action – the rotating blades do a great job of attracting the fish all by themselves.

Hits can be hard and the situation tight, so use a heavier line for this.

For either lake, I’ve put together a trio of suggested lures. Beginning with Moogerah, I’d suggest a Halco Poltergeist 50mm (pictured, 5). Troll this hard-bodied lure along and across the old creek beds and depth changes in areas where you can see the bass on your fishfinder. Best speed is dead slow.

The Bassman Shorty spinnerbait (3) should be cast between the old dead trees, sinking it to the bottom and winding it slowly back through the area.

Then there’s the TT Switchblade 1/8oz (2), which should be cast out into schooled bass spotted on your sounder. Let it sink to the bottom and hop it through the schooled fish with long lifts of the rod tip. Bites will usually happen as the lure drops back to the bottom.

For Maroon, the Lucky Craft Sammy 65mm (1) (colour: black) is a good topwater lure used near the edges of the weed in low-light periods and should be retrieved while shaking the rod tip. This will make the bait zig-zag from side to side. Pause mid-retrieve, as bass will usually eat it on the pause.

Rapala X-Rap 8cm (6) is a good jerkbait that should be cast later in the morning when the bass have stopped hitting topwater lures. Wind it underwater and jerk it around the weed reefs, making sure that you pause it. In winter, the pause can be as long as 10 seconds.

Finally, I’d suggest Keitech’s 3in Swing Impact plastic on a 1/4oz jighead (4). During the heat of the day, bass will drop back into deeper water. When you see fish at that 15 to 25ft mark on your sounder, cast this softbait across them. Let it sink to the bottom and then hop it back through the zone. Alternatively, slow-wind it up through the water column to get bites.

If you’ve always wanted to catch a bronzed Aussie battler, these two lakes are a great place to start. If you can’t catch them here, it’s time to take up golf or knitting.

Remember to buy your SIP before you go and enjoy some of the best fishing that SEQ freshwater has to offer.