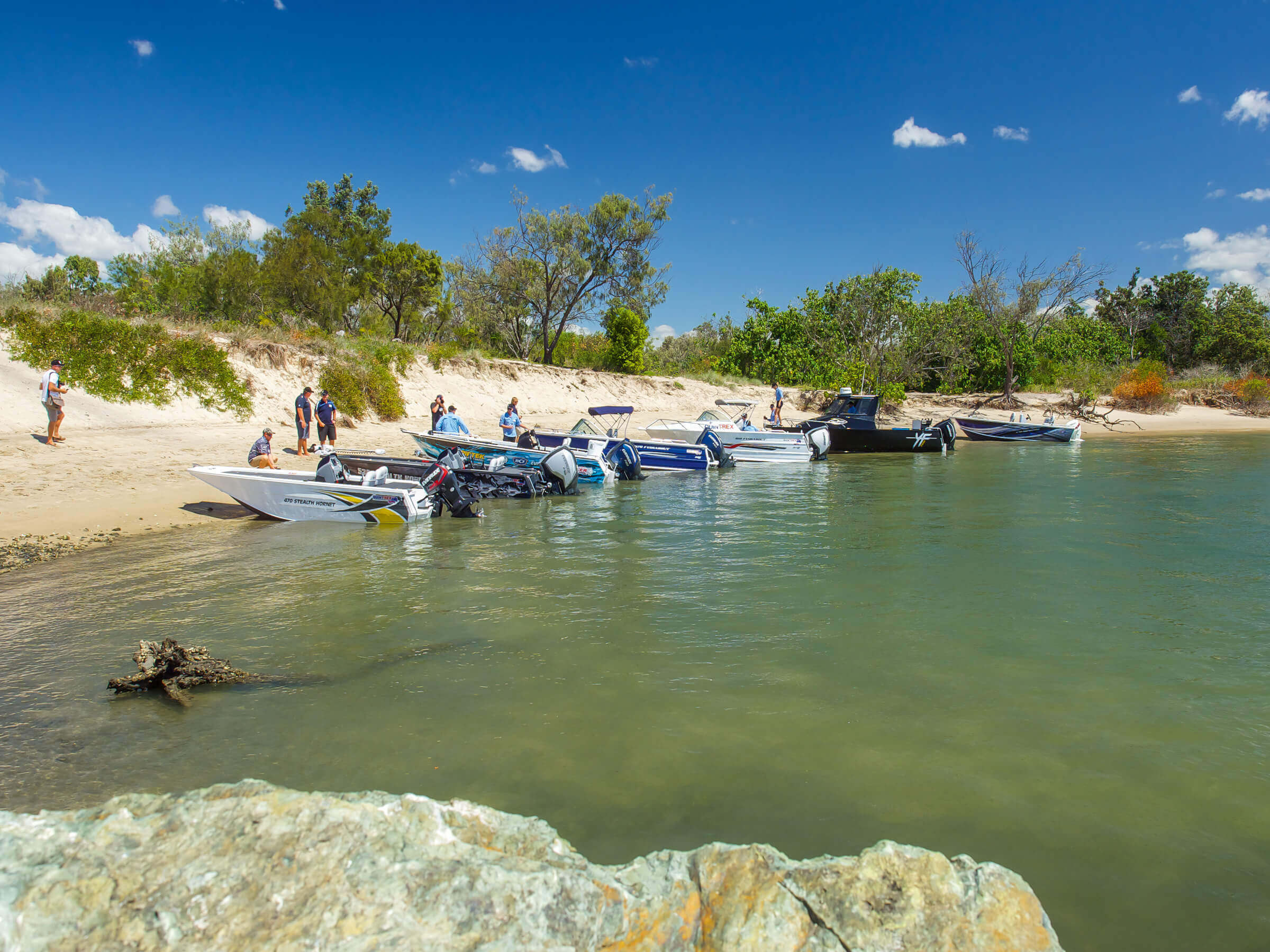 Evinrude continues the roll-out of its revolutionary Gen 2 range of high-tech two-strokes.

In 2014, Club Marine had the opportunity to visit Evinrude’s headquarters in Milwaukee, USA, to attend the launch of its Gen 2 E-TEC engines. The new E-TECs visually packed a lot of punch, with a futuristic design that took inspiration from super heroes and featured almost infinitely customisable colour schemes. They also represented a considerable leap forward in terms of two-stroke technology, with some very clever engineering delivering significant advances in fuel consumption and combustion efficiency.

They were initially only available in 200HO (High Output), 225 and 300hp classes and now, three years later, an all-new platform of smaller sizes is available.

To unveil the new high-tech two-strokes, Evinrude conducted a 2017 launch on the Gold Coast.

The Gen 2 range now extends to a 2.7lt V6 powerhouse, which is available in 150, 150HO, 175 and 200hp versions. While the original G2 big block engines have been well received, the 150-200hp classes perfectly suit the majority of Australian boaters. New distributor Telwater, which took over distribution from BRP last year, had the engines fitted to a variety of its own vessels for the launch, including boats from its Quintrex, Yellowfin and Stacer stables. Venue for the test was the Broadwater.

While the majority of outboard companies are starting to phase out their two-stroke engines, to meet stricter emission standards, Evinrude is proudly flying the two-stroke flag and doing it in style. Evinrude claims that the new G2 has the lowest emissions of any outboard on the market, with the most torque, lightest weight and best fuel efficiency. These are some very big claims and on-water testing gave me no reason to doubt them.

Regardless of what size G2 E-TEC I had mounted to the back of the test boats, they really did exhibit many of the attributes of a four-stroke, but with the unmistakable power delivery of a quick-revving two-stroke. What were fairly light boats were able to easily carry some very large horsepower engines without engine weight negatively affecting the ride and handling.

The old two-stroke odour and wafts of smoke are now truly long-gone when it comes to the clean-burning and incredibly fuel-efficient E-TECs and torque, mid-range power and holeshot were very impressive. While the G2s are dramatically quieter when compared with older-generation two-strokes, it has to be said that they are still noticeably louder than some modern four-strokes. But, given how quiet many engines are now, I’d still not characterise the E-TECs as loud or in any way objectionable when it comes to noise levels.

Fuel efficiency isn’t sacrificed either. While I only had time to get some quick fuel figures on the boats where available, they were excellent, and comparable, if not better than equivalent modern four-strokes.

Other new features on the G2 range include I-Trim, which is a built-in auto-trim feature that is great for those new to boating who may have difficulties adjusting engine trim to suit the conditions. While I found it quite unnerving to not touch the trim when cornering, or just getting the boat up to speed, I-Trim did perform faultlessly during the launch.

The addition of built-in Digital Power Steering, electronic shift and throttle and clean and clear rigging are attributes that would be welcomed by most regular boat users. I have to say that, as far as power steering is concerned, this is one of the smoothest and quietest of the modern power steering systems I have used and is far superior to conventional hydraulic steering.

Having experienced all the engines in Evinrude’s G2 range to date, I have to say it’s hard not to be impressed with what engineers have accomplished from an engine design that was seemingly doomed as tougher emissions regulations squeezed other two-strokes out of the market.

Its fuel injection and combustion technology has won awards and impressed many with its innovation and clever engineering. That said, though, the gains in fuel efficiency are offset to some extent by the fact that, being a two-stroke, you still have to top up the oil from time to time. In the case of the G2s, Evinrude claims that one fill of the built-in oil reservoir with it’s XD100 oil should last around 50 hours of normal boating use – a point worth considering when paying around $90 a bottle.

With the incredible and immediate reach of social media these days, there have been questions about reliability of the E-TEC range in some areas – and Telwater staff addressed the issue at the launch with a series of videos and testimonials. One was provided by a commercial crabbing fleet that had G1 E-TECs fitted to its Bonito crab boats. The old salty dogs in the video provided very authentic and laid back endorsements of the E-TEC reliability, power and fuel efficiency.

Interestingly, another media representative on the launch, who owned a G2 E-TEC fitted to his guide vessel, said he has done over 350 hours without issue and loved the engine.

And underlying any reliability concerns, Evinrude covers its engines with a five-year/500 hour warranty.

Telwater has also spent six months on-water testing every BMT package it sells to ensure that each engine was ideally suited to each particular hull and that all diagnostics were set correctly.

There is no denying that these are amazing engines offering modern features not found on other outboards. Their power-to-weight ratio is industry-leading and the ability to customise each engine cosmetically to suit boat hulls and colour schemes is, no doubt, a bonus for some buyers.

Along with the launch of the new G2 series, Evinrude also released a new G1 60hp HO E-TEC. The 60 is an inline three-cylinder engine, available in two shaft lengths and styled with striking black and red graphics. Its light weight and high output performance is perfect for small tinnies in the 4.5-5m size range. Fitted to a Quintrex 470 Stealth Hornet, it was a very quick little package.

For more information, go to: Evinrude.com.au.