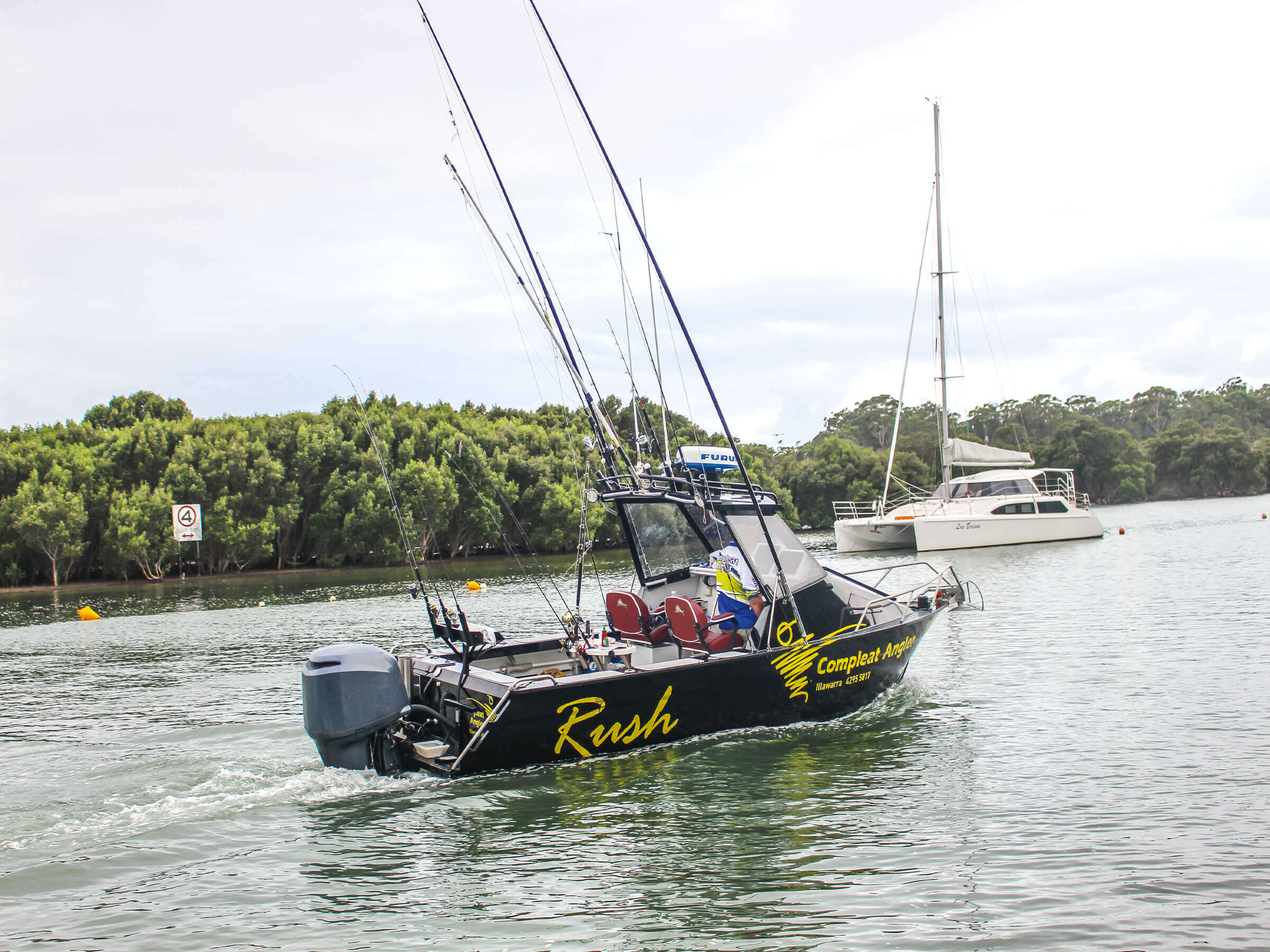 With well over a decade of fishing in all seas and conditions, Rush says his Bar Crusher 670HT is truly a boat for all seasons and all reasons.

We were fortunate to be joined on our Jervis junket fishing trip by Craig ‘Rush’ Rushby, proprietor of the Compleat Angler Illawarra store at Windang, just north of Jervis Bay.

Rush brought along his Bar Crusher 670HT, a tough all-rounder plate aluminium boat built by Bar Crusher Boats in Melbourne. It’s not a new boat by any means, being a 2004 model, but Rush swears by its sea-going abilities and has modified it extensively over the years to suit his own brand of fishing.

Rush said his main consideration when initially looking around for a boat was that it had to be all about fishing, with lots of work space, so he could chase kings, marlin and anything in between.

After considering a few fibreglass options at the time, he decided that plate aluminium was the way to go.

“The plate boats offered the added advantage of being super-tough so they could handle a few scrapes and bumps if we launched at some of the more dodgy ramps,” he explained.

“It took five months of searching and I checked out dozens of boats before finding the Bar Crusher 670HT. It was just six months old and had done barely a handful of hours. I bought it straight away and now it has over 1400 hours on the clock.

“I love the hardtop design, as you get zero leakage compared to running clears, so everyone stays dry all day. The fact that the glass windows are huge also makes it easy to see and pick up any distant birds. I should also add that the windows are tinted, so we don’t get sunburnt either.”

Rush says the ride is exceptional for an alloy boat and I’d have to concur after spending some time on a lumpy Jervis Bay during our squid expedition.

“With its distinct deep-vee hull we have fished some atrocious weather safely, in relative comfort,” said Rush. “However, I did add a set of trim tabs, which make it a lot easier to balance out the load when underway.”

The 670 has a large underfloor kill tank big enough to take barrel tuna. Situated centrally, it’s easy to access, is relatively well insulated, and will hold ice all day during the tuna season, says Rush.

“The cockpit is huge and we’ve had a number of occasions where we have had double and even triple hook-ups and have never felt crammed in. The flat, wide gunwales make great extra seats for the crew when out trolling. And I should also add that the cabin is big enough for a snooze – as my son Brad can attest to every time we go out!”

“Being alloy, it isn’t too heavy for its size and is a dream to tow. Living two hours from Jervis Bay, I sometimes run down for quick overnight trips as soon as I hear the fish are on the chew. I suspect if I had a big, heavy glass boat the same size I’d be less inclined to make the trip. And with more than 1400 hours on the original 200hp Yamaha engine, I’m definitely getting the use out of it.”

Like many longterm boat owners, Rush has made a few changes over the years, including upgrading the electronics and putting in a Furuno 585 with a 1kW transducer.

“One of the best things I’ve added is a tackle station/rodholder set in the centre of the deck,” explained Rush. “This centralises everything and so, not only can I travel with all the rods safely out of the way of the spray, but it’s also strong enough to troll from. In particular, I like to run my riggers from here, making them much easier to catch. It can take four rods and is also a small bait rigging station. It’s really like an island bench in the kitchen and can be utilised from all angles.

“It took a bit of building and I had to have a 10mm alloy plate welded to the deck for reinforcement, but now I don’t know how I fished without it. On top of all else, it also makes a great leaning post when fighting fish.

“I also upgraded to a set of fold-down outrigger bases and 16ft poles. The problem I found was that the poles swung around, so I had two clamps built and bolted to the top of the hardtop. Now I just swing the poles, lock them in, and they sit firm for the run.

“The boat came pretty basic, so I also bought a pre-made rod rack, which I modified to carry all the gaffs and tag poles down under the gunwale. As we seem to be doing more and more night fishing, I also upgraded with a pair of Hella LED spotlights, which illuminate the deck while chewing up bugger-all power.

“I also like how the deck drains into the bilge in the stern. Instead of being tucked away out of sight, it is easily visible so if something goes wrong you can act immediately. Bilge pumps always break down, so this way you can tell instantly if there’s a problem.

“The bait tank was huge to begin with, although I did need to upgrade the pump to keep the slimies alive. I like how it overflows immediately into the motor well, so there is no chance of it leaking inside the boat. I also added a pair of slimy tubes for livebaiting for marlin.”

Whether fishing out wide or in tight, Rush’s Bar Crusher 670HT is one tough customer that has paid back his initial investment with countless trips in all conditions. It’s a relatively soft-riding, hard-wearing boat that has retained its place in the Melbourne builder’s line-up over the years and remains one of its most popular models.