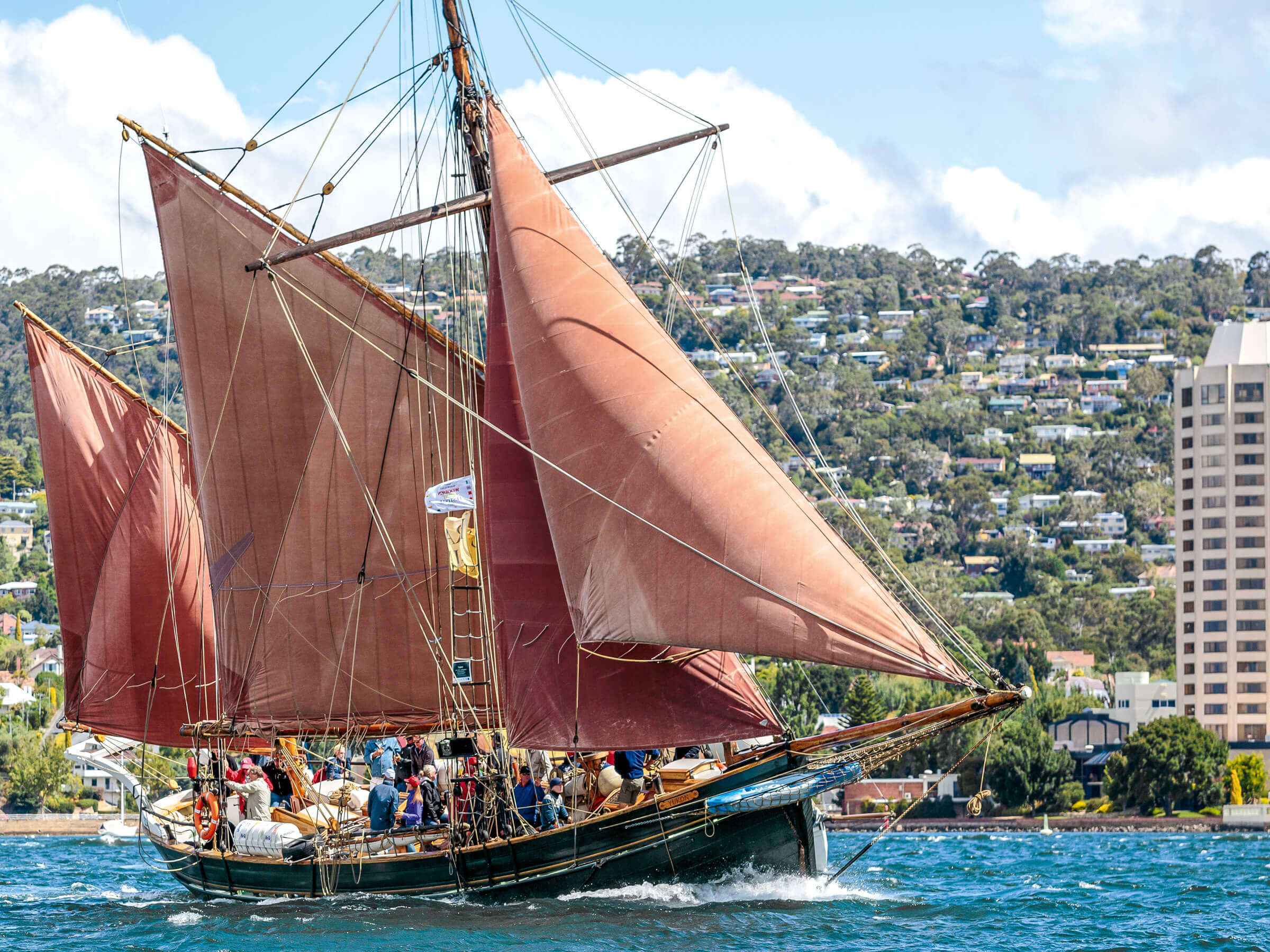 Every wooden boat has a story to tell, so there was plenty of yarning going on at the MyState Australian Wooden Boat Festival Hobart, held from February 10 to 13, 2017. Constitution Dock and the quays around the Hobart waterfront were packed with 450 craft, ranging from skiffs to 65m European square riggers and plenty in between to show off the history of Australian craftsmanship.

The quays thronged with some 220,000 visitors jostling through this great old maritime town, with a little less than half coming from interstate or overseas. Yet more visitors came from the cruise ship Ovation of the Seas that towered over the docks, its huge steel topsides contrasting sharply with the hordes of wooden masts beneath its blue bulwarks.

Strolling along the quay, with one eye to the clouds gathering over Mount Wellington, I noticed the flags of many nations fluttering from square sterns, canoe sterns, counter sterns and other indescribably shaped transoms, reinforcing the great individuality of wooden boats. Around 100 boats had come from the mainland and from overseas, the most prevalent among them the Dutch armada and its 40-odd crew.

This year, the festival’s theme was ‘Dutch’, to celebrate the 375 years since explorer and navigator Abel Tasman discovered the island in 1642, planting a flag on the west coast and naming it Van Diemen’s Land. In 1856, with the arrival of the harsh British penal colony and decades of bloody conflict with persecuted indigenous tribes, that name became stigmatised and was replaced by Tasmania. Tasman’s ships, the Heemskerck and the Zeehaen, were three-masted and had 50 or 60 crew, with 120 guns on the Heemskerck.

Elsewhere, a darker tale of Dutch seafaring was being told in a beautiful, newly made tapestry by textile artist Melinda Piesse. I gazed in awe at this graphic depiction of the Batavia shipwreck, shaped as a square sail and hung like a banner in the Dechaineux Theatre. With echoes of the famous Bayeux Tapestry, Piesse’s work shows the murder and depravation suffered by the Batavia crew when the Dutch East India Company vessel foundered on the remote west coast of Australia in 1629. Of the 341 ship’s company, only an estimated 68 survived, with some being marooned on the west coast as punishment for their actions. Some say this accounts for the lighter-skinned indigenous people found there today. Piesse’s tapestry is made of wool embroidery on Irish linen, and will commemorate this bloody episode for many generations to come.

To get the flavour of what life would have been like on a relatively small square rigger, visitors thronged Sullivans Cove for short cruises on schooners such as Yukon from Denmark, the 54ft Tasmanian sail trainer Lady Nelson and several others. Towering above them all was Tenacious, the British 65m tall ship, the largest wooden boat to be built in the past 100 years. Built by the Jubilee Sailing Trust in 2000 for able-bodied and disabled sailors, at 586 tons she would have dwarfed the 120-ton Heemskerck if they’d fought at sea, as the British and Dutch sometimes did.

Interestingly, it was deemed more prudent to build Tenacious from wood rather than steel, which says a lot for the West System epoxy used, a popular construction method on large and small vessels. So much so that its inventor, Meade Gudgeon, was made the first honorary member of the festival.

The Dutch vessels that had made the long journey (by container ship) to Hobart included a fleet of 20ft tjotters. Made of oak and with large leeboards, these were used by the Frieslanders of the North Sea – a famous seafaring race – to transport everyday items such as cows and farm produce amid the shifting sandbanks.

The Dutch flagship for the Tassie visit was the rather more glamorous Oranje, the Dutch king’s 26ft sloop.

Elsewhere, the quays were busy with owners polishing brightwork while workboats showed off some impressive old engines, ranging from a six-cylinder Gardner to trusty Seagull outboards.

I spotted a circa 1945 Gardner on an old Melbourne tug. After I’d chatted with to the owner for some time, he decided to start the engine … so off he wandered to the wheelhouse while I waited by the grey painted motor. But only a click of the solenoid was heard. We checked the batteries for charge, switched them over and tried again – to no avail. I suggested my old trick of whacking the starter in case it was jammed. Sadly, I had to leave the owner scratching his head and bemoaning his tug. “For the price I bought her for, I’ve now spent about three times that amount … and there’s more to go!” he said.

As I stepped ashore, I reflected on the saying: wooden-boat owners require hearts of oak and pockets of gold.

Moving along the north quay, where the putt-putt of slow-running engines could be faintly heard above the hubbub of the crowd, I searched for my own old engine – a paraffin-petrol Ailsa Craig model, built in Scotland around 1950. My search was in vain, but there were plenty others to study … such as the 1960 8.9hp Yanmar, with a huge flywheel and a crankshaft chain for hand starting. Very similar to my Ailsa Craig but a diesel, so there would be less sprained wrists with no advance/retard to adjust on the magneto. The old Scottish fisherman used to say that the single-cylinder diesels throbbed so much that they made the copper nails fall out of the planking … I certainly hammered in plenty of copper nails as a youngster.

As a youngster, the arrival of the two-stroke Seagull outboard meant freedom for me and less time on the oars when crossing the Pentland Firth, so gazing at the example of these famed outboards was very nostalgic. Being a fourth-generation Scottish fisherman, my family had initially gone herring fishing on lugsailers, so I sometimes wondered what my great-grandfather, John Houston Green, would have thought when steam arrived for the North Sea boats in the late 19th century. Thanks to the working steam engines at the festival, I could indeed get a flavour (and smell) of this old propulsion system. There were several steamers around the quay, including the Huon with its gleaming boiler and brightwork. Some, I suspect, had gas boilers.

For more information on these archaic engines, check out: steamboat.com.au.

The Wooden Boat Festival is interactive, with boatbuilding and joyrides on the square riggers down the Derwent River. Kid’s activities include rowing around the docks, a circus workshop and boatbuilding with the Woodcraft Guild Tasmania.

Peering over the edge of Watermans Dock revealed a fleet of small craft that included both sailing and rowing skiffs. These were visiting the show from Living Boat Trust’s base in the famed Huon Valley, where the legendary Huon pine is found. They’re known as a ‘raid’ flotilla, inspired by the old Scottish and Viking raiders. However, this modern mob assured me they’d done little pillaging when going through the bumpy D’Entrecasteaux Channel, due to them being too busy staying upright.

Their flagship was a beautifully restored 27ft Montagu whaler – these were standard equipment on all larger Royal Navy and Royal Australian Navy vessels from the 1890s to the 1960s and could take 27 people. Lightly built, they were utility vessels with dipping lug sails and could be rowed easily. Some of the raider crew rowed the entire 100 miles up the coast, using lightweight St Ayles skiffs. The organisation Women on the Water (WOW) built one of these in 2012 to compete in the St Ayles World Championships in Scotland and, as I write, a Melbourne branch is building one. These come in plywood kits and are four-oared replicas of the original Scottish Fair Isle skiff, designed locally by Australian Iain Oughtred.

In a final salute to sail at the festival, Monday (the last day) was fittingly Royal Hobart Regatta Day, a public holiday, so the festival ended as it had begun – with a parade of sail down the historic Derwent River to conclude this incredible biennial event that I’ll be returning to in 2019.