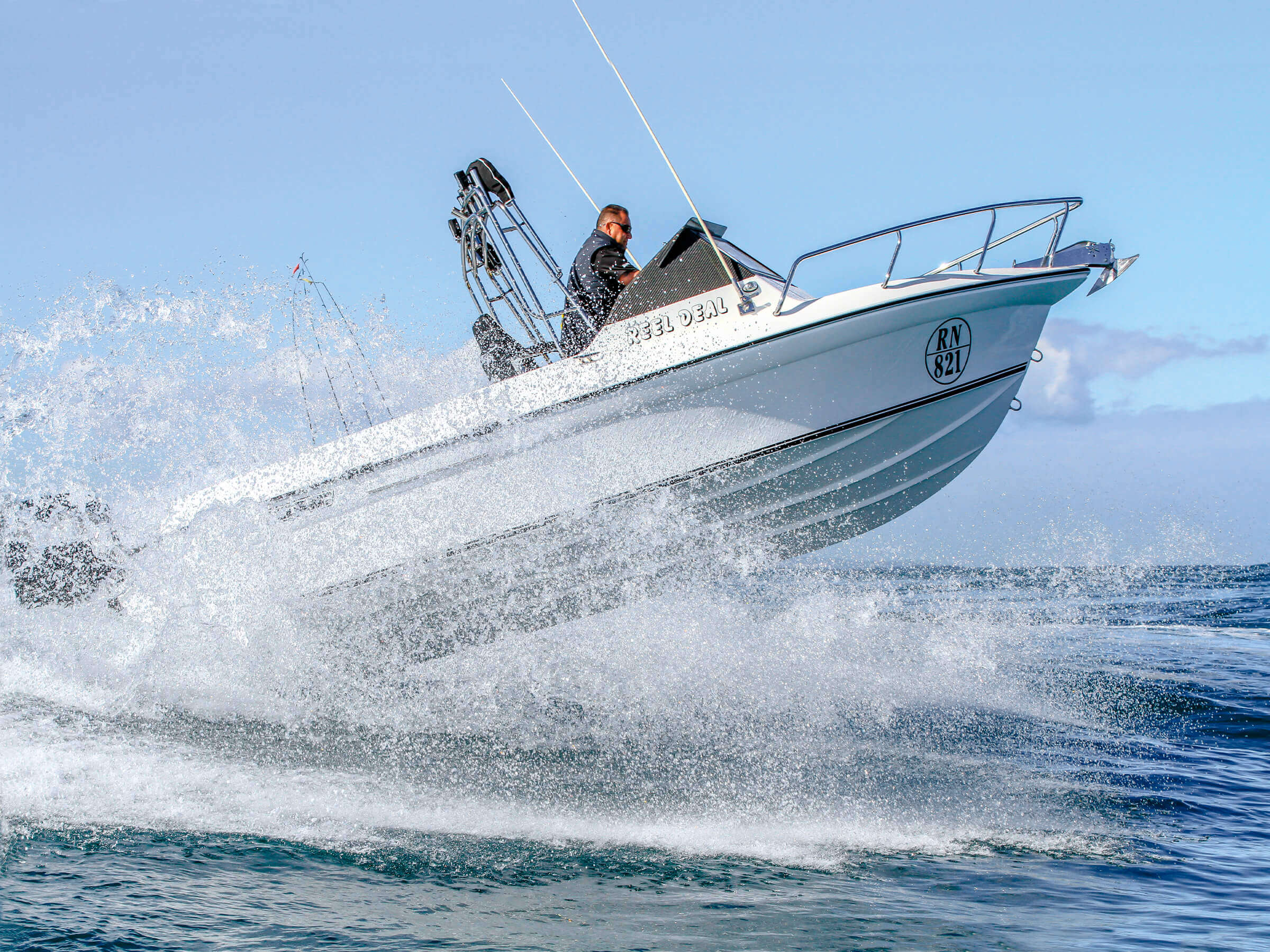 Edencraft has come close to perfecting the art of the offshore boat with its latest offering.
If you’re looking for a serious bluewater boat with pedigree, you don’t have to look much further than Edencraft’s 6m Offshore.

Edencraft boats have evolved from a lifetime of seagoing experience. Their ancestry was spawend in the golden years of post WW2 offshore powerboat racing, when progressive deep-vee design was pushed to its limits, especially with the introduction of a miraculous new boatbuilding substance called fibreglass.

The Edencraft 6m Offshore has a pretty impressive family tree, evolving from the American V18 Bertram, then to the famous Aussie V19 Haines Hunter and on to its current incarnation, boasting an unquestionable pedigree with strong commercial credentials, a reputation for the highest build standards, and unmatched seafaring capability.

Make no mistake, the 6m Offshore is one tough customer. Every hull is built to stringent commercial survey criteria and has a hull weight some 300kg above many production packages of similar dimensions. Call me old hat, but I like hull weight on the water. There is simply no substitute for displacement and that’s exactly what you get with every Edencraft. You really can feel the difference.

Time hasn’t stood still at Edencraft, though. The tough, time-proven concept remains firmly intact, but enhanced with some tweaks in the keel length, including extending the boat to include a large engine well and pod that is suitable for both single and twin-engined set-ups.

Peter ‘Bobcat’ Cogliandro is an Edencraft tragic with a long history spanning many years and almost as many boats. In fact, so enamoured of Edencraft boats is Bobcat that he has the brand tattooed on his forearm. Peter is quite typical of many bluewater fishing devotees, who demand the best and push their boats to the limits.

We joined Bobcat and his nephew Samuel for a hair-raising ride in the treacherous waters of Port Phillip Heads, an area internationally recognised as one of the most dangerous stretches in the world. Bobcat simply grinned with confidence as he challenged the aquatic fray, easily conquering the wash, whirlpools, peaks and troughs in a masterful display of boatmanship.

I jumped behind the wheel and was quite surprised by the performance of the twin 140hp Suzuki four-strokes. One of the only criticisms you could ever level at this timeless hull is its very flat attitude – however the added weight of the twins provided a perfect balance. There’s an underlying assurance gained by the security of twins when the pea soup hits the fan and it’s a long hike back to port. We braced ourselves as we set a course through the steep pressure waves at the last of a strong runout tide – not an ideal time to be playing in The Rip. Yet there was never any doubt or misstep as we comfortably traversed the washing machine and out into the muscular swells of Bass Strait.

The weight and balance of the twin-rig outfit allowed us to play in the turmoil, both into the steep, pitching pressure waves and, as we turned for home, her nose stood high and proud keeping us dry, comfortable and feeling very secure. The heavy hull certainly pushes a lot of water, but its displacement allows for strong confidence, with the added weight on the stern keeping the nose high when surfing down steep waves.

Back inside the bay, I opened the throttles and was exhilarated to see 43.5 knots (80km/h) from the twin Suzuki 140s at wide open throttle. Bobcat set up the engines with greater than usual transom spread and has achieved exceptional results. The Suzukis were drinking just under 50lt/h each at WOT but, at a more typical 50km/h, we found an economical 28.7lt/h per engine. The engines were matched with Solas 18P three-blade stainless props aided by Suzuki offset drives, and a 2.59:1 gear ratio obviously stepped up the top-end speed.

The internal design reflects a commercial simplicity, with a huge 6sqm of deck space plus nice high coamings, a simple transom, complete with moulded livebait tank, and a functional helm protected by a wave breaker, with windows. The twin-engine rig includes dash-mounted binnacle controls with twin Garmin multifunction displays. However, there isn’t enough room to flush-fit two large GPS/sounders, so the big Furuno was dash-mounted.

The V-berth is deep and reasonably spacious, with fitted bunk cushions trimmed around the Waeco fridge/freezer that Bobcat added.

On deck is a centrally mounted pillar for added stability when working the decks in a rough sea, slimey tubes inside the livebait tank, tubular rubber floor matting and, of course, the lift-out dive door for boating that big ‘un. There’s also a huge underfloor killtank, and deep side pockets with toeholds all-round. The entire work area is simple to clean with speckled flowcoat finishes.

All Edencraft boats feature timeless aesthetics, this one with bright polar white gelcoat and ebony trims on traditional mouldings that will never go out of style. Edencraft boats are handcrafted and can offer a full array of custom preferences.

Edencraft has come close to perfecting the art of the offshore boat with its latest offering. In my opinion, these legendary hulls have never been beaten, and probably never will be – yet it’s great to see individuals like Bobcat taking the time to fine-tune the fitout to enhance what is already a standout offshore boat.

IT’S COMPLICATED … The Edencraft name has passed through many hands over the years.

There’s a forgotten hero in the long history of Edencraft Boats. His name is Ron Doyle, a confident, yet softly spoken man with a wealth of nautical history, who played a large role in the development of deep-vee powerboating.

Ron is nowadays an active retiree of 70 years of age, while his family has deep roots in the Victorian boating mecca of Gippsland Lakes. He completed his apprenticeship at the Ford dealership in Eden and eventually purchased Eden’s Nissan dealership in 1970, followed by the Holden and Mazda dealerships.

Over the years, he formed a close friendship with Erick Hyland, a talented all-round tradesman who had a love for boats and motorbikes. In the late 1970s, the pair started Ron Doyle Marine, servicing commercial operators with an OEM dealership for Haines Hunter boats and Mercury outboards. Erick was the engine fitter and mechanic, among a multitude of other duties.

Meanwhile, Haines Hunter had endured many trials and tribulations, including floods, fires and global economic crashes, until a controversial takeover forced brothers John and Garry Haines out of the company in 1980. Around 1985, Ron’s brother-in-law and business associate, Kevin Fitzpatrick, eventually purchased what was left of a selection of original Haines Hunter moulds.

All of the tooling was relocated to Eden, and thus was born Edencraft.

“About 95 per cent were commercial abalone boats,” recalled Ron. “We ran Edencraft for about six years and built a great reputation for tough, premium-quality workhorses.”

Eventually, Erick had itchy feet and Edencraft was sold to the manager at Bairnsdale Mazda, Greg Salmond (now proprietor of Bass Strait Boats), along with commercial fisherman Paul Bozinis and an abalone diver fondly referred to as ‘Elvis’. They moved the company to Bairnsdale and Bozinis ended up with the company.

Harry Twikler, of Ultimate Yachts – coincidentally my first boss, way back in 1977 – purchased Edencraft in the mid 1990s and relocated the company to Corowa, Victoria. Harry’s brother, Chris, and partner Andrew Rennie, became the dealers through their Hastings, Victoria-based boatyard, Central Marine.

Harry ran Edencraft for some 10 years, before selling to Warren Lyons, who moved the company to Queensland, where the hull and deck for the 6m Offshore were modified.

In 2009, the company was sold to a private investor and relocated to Geelong, Victoria, where it was managed by Alan Ball, who oversaw the introduction of many improvements.

Fast-forward to May, 2016, and the Maher family has now purchased Edencraft and established a new purpose-built factory under the banner of Edencraft International, located in Moolap, near Geelong.

Two key employees have a long history with the Edencraft brand, including Chris Norman, who has been building Edencraft boats since he was just 16, completing his apprenticeship under Harry Twikler at Corowa, then moving to Queensland with Warren Lyons. Chris is joined by Steve Foullas, one of the most respected technicians in the marine industry, with a strong reputation established at JV Marine.

The Edencraft brand has been reinvigorated with the new regime and uses the latest technologies in materials and design to constantly improve and develop its range of models.