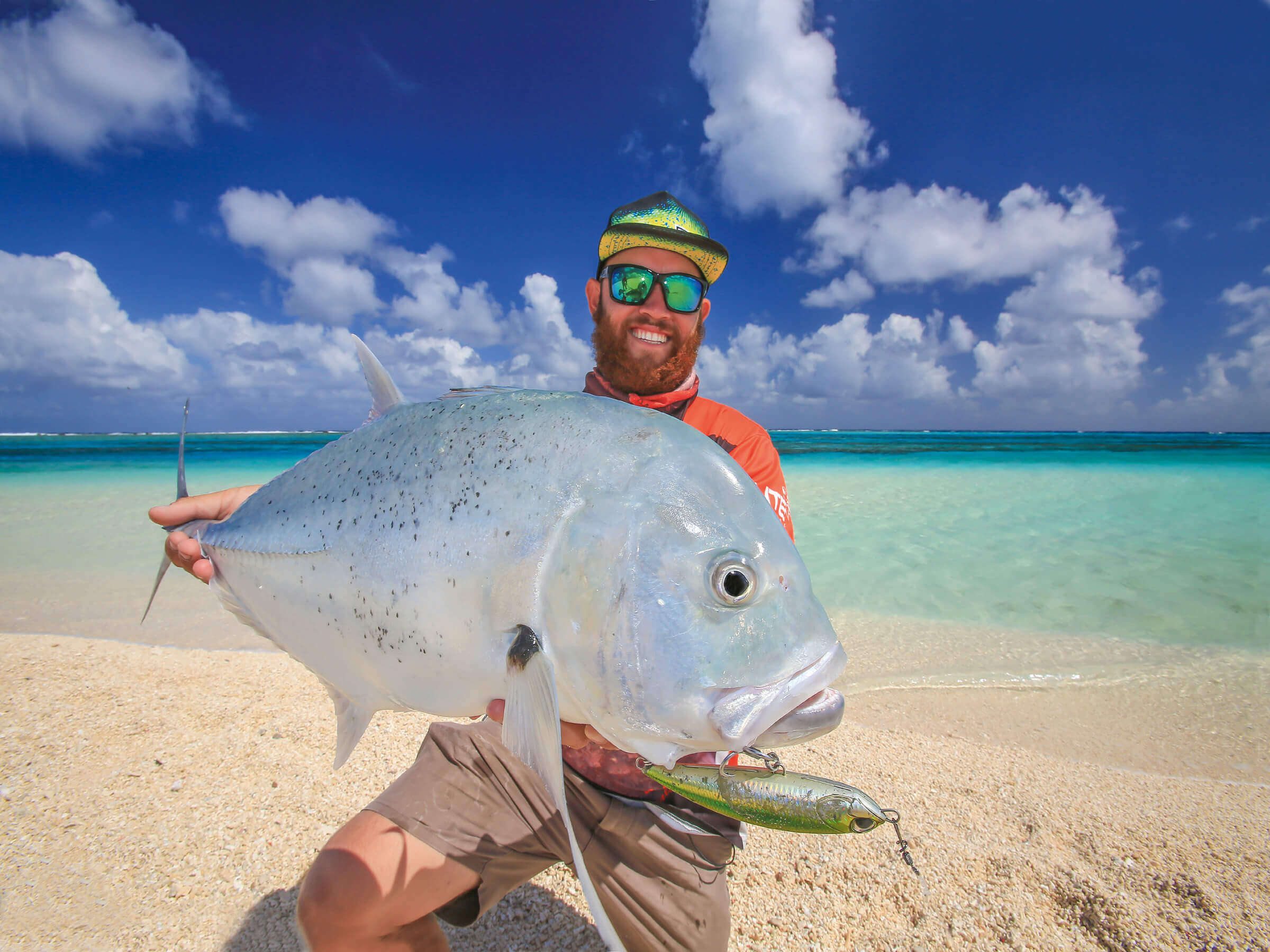 You don’t even need a boat to catch fish at Wreck Reef
When it comes to exotic fishing locations, there are few as impressive or as remote as the Coral Sea’s Wreck Reef.

Remote locations are always a big drawcard for me when it comes to sports fishing. For a start, due to their remoteness, they don’t tend to see too many lures, baits or jigs. Which means the fish are hungry and ready for action. So when the opportunity came along to join the crew from Reality Fishing Charters for a trip out to the isolated and pristine Wreck Reef, located 450km north-east of Gladstone in the Coral Sea, there was no way I was going to miss out. Even better, I would be going as a host for top-rating US Outdoor Channel show, Trev Gowdy’s Monster Fish, so we’d be performing in front of a massive audience. No pressure whatsoever!

I did a little research prior to the trip and was fascinated by some of the history of the remote isles, including an incident involving notable explorer Matthew Flinders who, while on a convoy with three square riggers, hit the reef in 1803 – hence the name. The Cato and Porpoise ran aground, while the Bridgewater narrowly missed the reef and then promptly sailed off, leaving the others to their fate.

Ironically, at the time, Flinders was on his way back to England to submit the first nautical charts he had completed of the Australian coastline, many of which we still navigate by today. Being shipwrecked wasn’t going to stop him though. Unbelievably, he rallied some of the crew and rowed all the way back to Sydney and then returned to rescue everyone left behind, all in the space of six weeks – a very impressive feat, with none of the navigational aids many of us take for granted today.

My research also revealed that the reef is part of a series of atolls that make up a seamount that rises thousands of metres from the sea floor and spans more than 25km from Bird Island to the West Islets.

While not as challenging as Flinders’ first visit to the area, our own voyage was not all plain sailing, with a 30-knot south-easterly blow and accompanying swell keeping us on our toes. Still, being on a large and stable cat such as the Big Cat Reality, under skipper James McVeigh and his more than capable crew, took the heat off somewhat.

At the end of a 38-hour steam, and with the wind still howling, our first destination was a safe anchorage behind Bird Island. With the seas still lumpy, we opted for a bit of island exploring first up and it was immediately obvious how the island earned its name – it is literally teeming with thousands of sea birds, nesting and flying in all directions, with an accompanying chaotic racket.

But we had come here to fish so, as soon as we pulled up on the beach we started flicking lures around. And it only took seconds before mate Tim Milat was hooked in spectacular fashion. He had cranked his lure almost to his feet when a rampaging GT (giant trevally) exploded out of the shallows in a savage and ferocious display.

Hooking up almost on the beach, it turned out to be one of the shortest GT tussles I’ve ever seen, with the fish beached with what I took to be a totally bewildered look on its face. As it was dispatched back into the shallows, Tim flicked the lure again and, proving the first hook-up was no fluke, had an even bigger GT at his feet in seconds.

But the next cast brought a sense of reality to the occasion – Tim and his expensive stickbait were completely smashed. Not to be outdone, I was similarly savaged a few minutes later and we were both left wondering what else lay in store over the following week.

While the wind kept up for the next two days, we had to wait until day three for a shot at a spot known as The Ledge. Jutting out from the reef edge, it drops down nearly vertically some 50m. It looked really fishy and we kicked off, hooking up almost immediately with an explosive surface strike, which was exactly what we had hoped for – until a dirty great cuda stuck its head out of the water.

As good as The Ledge looked, we struggled with the stickbaits and even my trusty old Roosta popper failed to draw any attention. Nevertheless, the fishfinder was alive with activity down deep. Intrigued, I couldn’t help myself and sent a jig down.

It barely touched the bottom before I was on. A short, brutal fight ensued before a fairly decent GT popped up. Then, on the next drift, I backed it up with a rather startled looking coral trout before an even bigger GT jumped on. It made for some awesome jigging, but we had a bit of a problem. We were under strict instructions from the US producers of Trev Gowdy’s Monster Fish to provide surface fishing action so, as hard as it was, we had to leave the bite, but not before Tim added a dogtooth to the mix.

One of the biggest issues with fishing such remote locations as Wreck Reef is that it is largely unmapped. As a result, it’s hard to know exactly where the fishing hotspots are. There are detailed charts available for plotters but, as we discovered, they can be very inaccurate. On one occasion we identified a deepwater ledge that just screamed dogtooth – however try as we did, we simply couldn’t find it anywhere on the plotter.

While searching for another phantom hotspot, we came across a few uncharted bommies, which looked very fishy indeed. In fact, on my first cast, a huge green jobfish emerged and smashed my stickbait straight off the top. Tim followed suit with another equally big fish, which set the wheels in motion for a great session. It was literally non-stop jobfish, although the GTs remained elusive.

Back on the mothership at lunchtime, Jim and Reg Pennie, who were fishing nearby, reported encountering heaps of GTs, including a monster in the 40kg range. As it turned out, they were in the thick of the action, while we were only a short distance away with not a GT in sight.

After lunch, we targeted the new GT hotspot, casting a mix of stickbaits and Roosta poppers, but it was as though the jobfish had followed us to the new location, only with a few trout.

Scratching our heads, wondering what to do next in our quest for some solid GT action, the water suddenly erupted as Tim’s lure hit the water. There was no question about the culprit – it had ‘GT’ written all over it. After missing on the first cast, it came back with a vengeance and Tim had a solid fight on his hands.

As good as the long rods are for casting PE8 braid and above, when it comes to fighting GTs, it can be brutal. Add in the fact that we were in an oversized plastic bucket and it only made things harder, but Tim kept the pressure on and soon had a solid GT coming to the boat. It was then that we saw a much bigger fish trying to steal the lure off it –it never ceases to amaze me how the smaller ones always seem to get the bait first!

Right at the boat, the big fella had another crack, but somehow in the confusion the smaller fish became unstuck. The pressure ripped the lure from the water, the result being GTs one, us zip. There was no time for commiserations as I cast out in the vicinity of the first bite and, with a couple of sweeps of the stickbait, the water erupted and I was on. For some reason, I had downgraded from my heavy GT outfit and was running a PE5 Shimano Grappler rod matched up to a Twin Power reel loaded with just 50-pound Sufix braid. It’s a great outfit for kings, but big GTs take things to a different level and I suddenly found myself clinging on for dear life.

With a bit more luck than skill, I kept the beast out of the coral and eventually had myself a solid Wreck Reef GT. Super aggressive, they really are perfectly suited for sports fishing, and they love lures, especially near the surface and fight like runaway freight trains.

Importantly, because GTs actually taste terrible with incredibly tough flesh, they are ideal for catch and release fishing. Eager to take advantage of the crystal-clear waters, I decided the fitting way to see this particular lump of a fish off was to jump in and join him. Donning my dive gear and trusty Aquatech housing, I slipped into some of the clearest water I have ever seen. It looked like it was barely a few metres deep, but I was actually in almost 20m of water.

As I followed the fish down, I was mesmerised by its motion – until I realised how deep I actually was. With lungs screaming, I shot back to the surface, leaving the GT to his own devices. Still, it was a memorable experience following a muscular GT back to the depths in such clear Coral Sea waters.

Over the years, I have been on a lot of charters, many of which are set up to ‘spoon feed’ their guests so, from my point of view, they don’t really ‘earn’ their fish. It suits some people, but I’ve always followed the DIY approach, which is exactly what Reality Fishing Charters is all about.

Skipper James McVeigh worked in the dive industry for decades, but tired of the high maintenance and low returns from the bubble blowers. Then a group of enthusiastic anglers approached him to take them out to explore the remote reefs and the rest is history.

Instead of a standard charter trip with guides, McVeigh decided to target serious anglers who wanted to do things their way. It’s a growing market as not all anglers want to be handed the rod but have a deckie do all the actual work. On the good ship Big Cat Reality, you need to bring your own tackle and can fish as hard and as often as you want. Each morning, they send you out in the tenders and from there it is up to you.
Having said that, they haven’t spared any expense in the tenders as they are fully rigged, with sounders, plotters, rodholders and lean bars to making casting really easy. Powered by the new Mercury four-strokes, they are economical and punch along at a good speed. Considering the fish being targeted, they certainly give new meaning to the concept of big fish, small boats.

I should also add that the crewmen are extremely efficient with their safety procedures and really do run a tight ship, monitoring all the tenders with regular radio skeds. And, even at night, you don’t have to stop fishing. McVeigh often sits the boat on deepwater pinnacles so guests can jig for dogtooth.

In between fishing sessions, McVeigh and his crew make sure you feel looked after on their large 24m mothership.

Almost 10m wide, Big Cat Reality was built in 1973 as a mothership for the Cairns black marlin fishery. While she’s not a new boat, at 165 tonnes she is incredibly seaworthy. Accomodation is basic the way most Aussies like it, but where this charter really stands out is in the service provided by the crew. They simply can’t do enough for you, the food is exceptional and the liquid refreshments are very cheap.

If you are looking for an action-packed angling adventure, find out more at: bigcatreality.com.