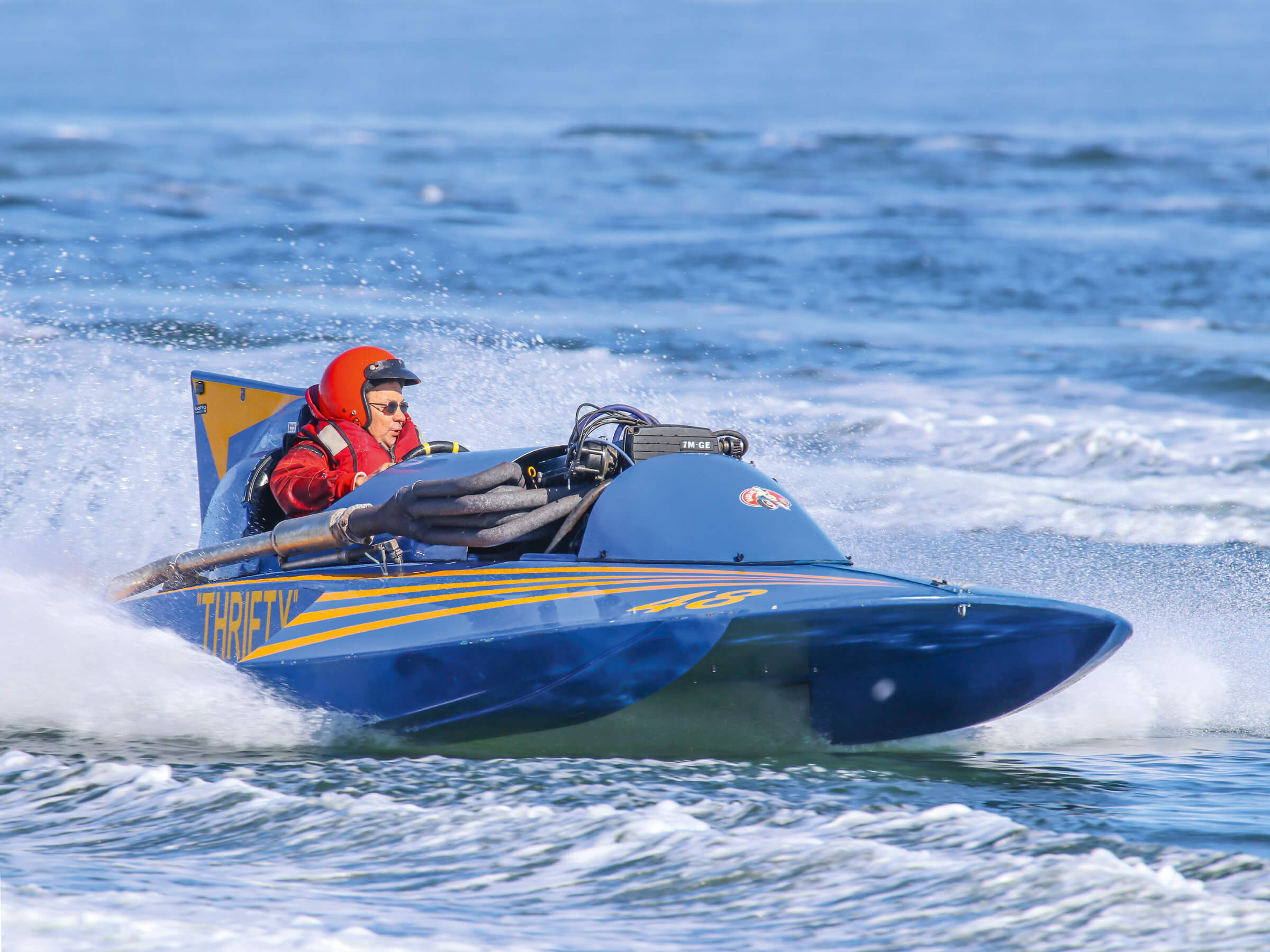 Peter Randell has his hands full piloting Thrifty Too
Powerboat race fans and former racers gathered at Forster for a celebration of acceleration.

Celebrating its tenth anniversary, the 2017 Fred Williams Ski and Boaties Reunion – Australia’s premier event for classic race boats – was held at Forster on the central NSW coast over the July 1-2 weekend. The annual event has come a long way in the past 10 years and the 2017 running was a great opportunity for participants to reminisce and replay old rivalries while enjoying the thrills, speed and sound of the many classic speed machines that were unleashed.

But the reunion was not simply an event for Ye Olde salts. There were no sea shanties to be heard, no knot-tying demonstrations and definitely no sails. Think supercharged big block Chevvies, alcohol fuel and eye-watering speed – a one-of-a-kind celebration of nautical horsepower unleashed.

The Fred Williams Ski and Boaties Reunion is a public salute to the doyen of waterskiing and powerboating in Australia and his contribution to the sport. Fred Williams is a highly respected boatie, a man who founded the Fred Williams waterski empire, campaigned an accomplished ski race team, raced inboard powerboats and just happens to be a resident of nearby Newcastle. Fred gladly lent his name to the first event, back in 2007, when just five boats participated in the inaugural meet at Taree.

This year, power boaties of all ages gathered under the common bond of power and speed. There were the classics, of course, representing the past, but there was also more contemporary technology on display, with drivers taking to the water to demonstrate how far race boat technology has come.

The future was on display in the form of current world water speed record-holder Ken Warby and his son David’s Spirit of Australia II. The local father and son team rolled out their brand-new world water speed record challenger. The glistening white jet-powered projectile was a real show-stopper, particularly when the team gave the Orpheus jet engine a run-up with a piercing wail, which drew spectators from all directions. (See Keeping it in the family P139).

It was obvious that interest in classic boats has never been stronger, with the reunion attracting more than 100 boats. The variety of boats present was all-encompassing, catering for all tastes, from timber to fibreglass, hydros, flat bottoms, outboard tunnel hulls and skiffs. And there were household brands from the past such as Lewis, Everingham, Sanger, Thurgar, Howard, Hammond and Jones.

Recognising the boats was the easy part – the hulls may age, but they still look the same. The same cannot be said of their owners, though … less hair, more wrinkles, a slower gait, perhaps, but once their attention was drawn to the boats, that same old sparkle in the eyes soon emerged. The speeds and race outcomes were embellished, no doubt, but there was no questioning the passion.

Many drivers, mechanics and owners of old were there to reacquaint themselves with their old mates and rivals, plus get a close-up look at some of the more significant boats from bygone years.

Some of the names at the reunion included Ken Warby, accomplished boatbuilder Bert Everingham, and fellow boatbuilders Graham Howard and Bob Thurgar.

There were ex-racers, too. Anyone remember Peter Smith and Kaos? Other ‘name’ racers included David Toyer, Grant Torrens, Edgar Phipps, Lee Kavanagh and Bob and Dave Carroll – all there to reminisce about the good old days, talk about how fast they used to race, and who they used to beat.

Of course, events like this are powered by driven individuals, with Rhonda Wojcikewycz heading up the local organising committee, supported by a big team over the weekend to run the event, both on and off the water. A racer in her own right with an Everingham 5lt runabout called Hot Lemon, Rhonda summed up the popularity of the reunion.

“People have all these wonderful boats in their sheds,” she said. “But the sport is full of rules which prevent them racing now. They’re not allowed to do anything with them, so the reunion is an opportunity for the classic boats to get on the water, make some noise and have a fun weekend.

“Next year, we’re planning on growing again, with some ski racing, offshore and, of course, circuit racing.”

JUST FOR GO FOR IT!

Guys like Peter Randell are the heart and soul of the classic boat scene. Randell drives an old three-pointer hydro called Thrifty Too, a 1950s Ted Jones hydro design from the USA, but built in Sydney in 1970. The boat started its life drag racing with a 351cu in Ford Cleveland, which was swapped for a 283cu in Chev.

Goodness only knows how many owners this classic has had but, when Randell acquired Thrifty Too six years ago, it was fitted with a six-cylinder, 3lt Toyota Cressida engine with triple side draught Weber carbies hanging off it. There is a 20 per cent step-up Z-drive gearbox and Randell reckons the boat is good for 155km/h of unbridled pleasure.

“I’ve been into boats since I was eight years old,” Randell says. “I’ve built two boats and I’m currently restoring one. I love the old classics – they’re full of character. It’s a great way to waste some fuel and have some fun!”

Randell and Thrifty Too unwittingly make a point – there is more to the classics than chrome, glitter and polished timber. Thrifty Too leaks and has a liberal amount of rust on the exhaust pipes. She’s not the fastest nor the shiniest, but in Randell’s eye she’s the most beautiful boat on the water.

“We’re not racing seriously,” he says. “But then, no-one likes to lose! When you put your helmet on, you forget about everything they said at the briefing and just go for it!”

Hands up everyone who remembers Kaos? In their day, Kaos and Peter Smith were the best thing on the water in blown displacement circles. This was an era when supercharged engines were just coming into their own. They were making big power; power that was difficult to feed into the hull and keep on the water.

There was none of today’s foot override cavitation plate equipment around to ensure the hull stayed planted on the water. Drivers had to manhandle their beasts around the circuit and Smith was as strong as they came. To prove it, he’d lift a 44 gallon drum of methanol fuel on his own.

Smith knew engines, he knew hulls, and knew how to drive – and he had a reputation for being strong and fearless.

When he was on the water, the crowd was in for a great spectacle. Along his journey in boat racing, Smith bought the Everingham boat business from Bert Everingham and built boats on the Gold Coast. He rates Rhythm, a 20ft shallow-vee Everingham model, as the very best boat he ever drove.

He also raced in America and showed just what an Aussie could do in a shallow-vee Everingham with a blown Chev. Rumour has it he was so good, that the Americans disqualified him.

The irony is that he ended up living in the US, flying helicopters for a living, which he still does in Florida.

Smith was in Forster expecting to drive one of his old Kaos boats, but the boat in question was not ready. Instead, he took to the wheel of the Everingham Mr Horsepower. How fitting …

Peter Smith can still drive like the days of old, and he can still give spectators the high-horsepower entertainment they came for.

KEEPING IT IN THE FAMILY

Ken Warby is a highly decorated man’s man in the traditional sense of the term. He set the World Water Speed Record back in November 1977 and then went on to lift his own record to 317.6mph (511km/h) at Blowering Dam in NSW in 1978. Warby built the boat in his back yard using a jet engine purchased from a scrap heap. Others thought that if it was that easy, then they would apply their high technology and big budgets and blow the record apart. Many have since failed, and some have died in the attempt to better the Aussie battler’s record.

The record stands unbroken 39 years later and the original backyard boat, Spirit of Australia is now displayed at the National Maritime Museum at Sydney’s Darling Harbour.

Now, there’s a new boat from the Warby shed and a new driver – Ken’s son David. Also an accomplished and experienced boat racer, David Warby is every bit his father’s son. The pair are a united duo, heading a 10-man team for an assault on Ken’s existing mark.

“Spirit of Australia II is a new and improved version of Ken’s record-setting hydroplane,” explains David.

“Everything that Ken learned from the record has been put into the new boat. Spirit of Australia II is longer, but has the same beam. There is more power with the Orpheus jet and the centre of gravity has been moved slightly forward.

“We plan on taking our time with Spirit of Australia II. We will gradually work up the speed, aiming to break Ken’s record, and then see where we can go with more speed.

“There is no defined timetable and no pressure, just a good team of guys. Many of the team were involved with Ken’s campaign in 1977/78, so it all feels very comfortable.”

If, like Graham Howard, you live at Sackville on the Hawkesbury River and build boats, then you automatically achieve legend status. This region lays claim to more high-powered boatbuilders than anywhere else in Australia.

Howard is a boatbuilder whose workmanship knows no peer. Displacement hulls or hydroplane hulls, he has built them all. Howard Hydroplanes are not only quick, they are a work of art and are known as winning hulls.

While Howard builds race-winning hulls for contemporary racers, he has built two classics for himself. One is an Aussie clinker skiff and the other a Hacker gentleman’s launch – a throwback to an era that holds great personal appeal.

The skiff is 15ft 2in, with an all-timber hull with solid maple planks backed with ply. The ribs are mountain ash and the trim silver ash. Coachwood ply has been used on the deck.

The yet-to-be-named craft is powered by a very rare 2300 Fiat engine, simply because “I could and I wanted to,” smiles Howard.

The USA Hacker launch design was changed slightly by Howard, drawing on his years of experience building and observing boats of all descriptions. It sports a 21ft hard chine hull, built in a ‘butterbox’ style, and then sheathed in 6mm-thick mahogany.

Power is appropriately from a bygone era – a 1945 Chrysler side-valve engine.

“Just like old school, with a carby and distributor,” says Howard.

Grant Torrens has a lifetime of achievement on the water. At one time, he held the world barefoot ski speed record and he was the first in the world to barefoot at 100mph (160km/h). Torrens also held the world waterski speed record for a very long time, having clocked a variety of speeds in the realm of 135mph (217km/h) through to 150mph (241km/h).

At the reunion, Torrens presented two immaculate boats. Torrens Title is a 20ft Raysoncraft built in Sydney by Bob Thurgar. The engine is a massive 540cu in (8.8lt) Chevvie, supercharged and running on alcohol fuel. The second boat, equally as immaculate, is a Hammond clinker family runabout, also Chev powered, but with the more sedate 350cu in (5.7lt) version.

“It’s all a bit of good clean fun with the old boats,” says Torrens.

“Back in the day, I was drag racing Torrens Title, a Sanger hydro with a huge Chev on nitro (nitromethane). They ended up banning the nitro fuel, which was a massive disappointment. My flat bottom is good for 140mph (225km/h). It’s a good boat and it’s a quick boat.

“I love the nostalgia events – just wish there were more of them.”