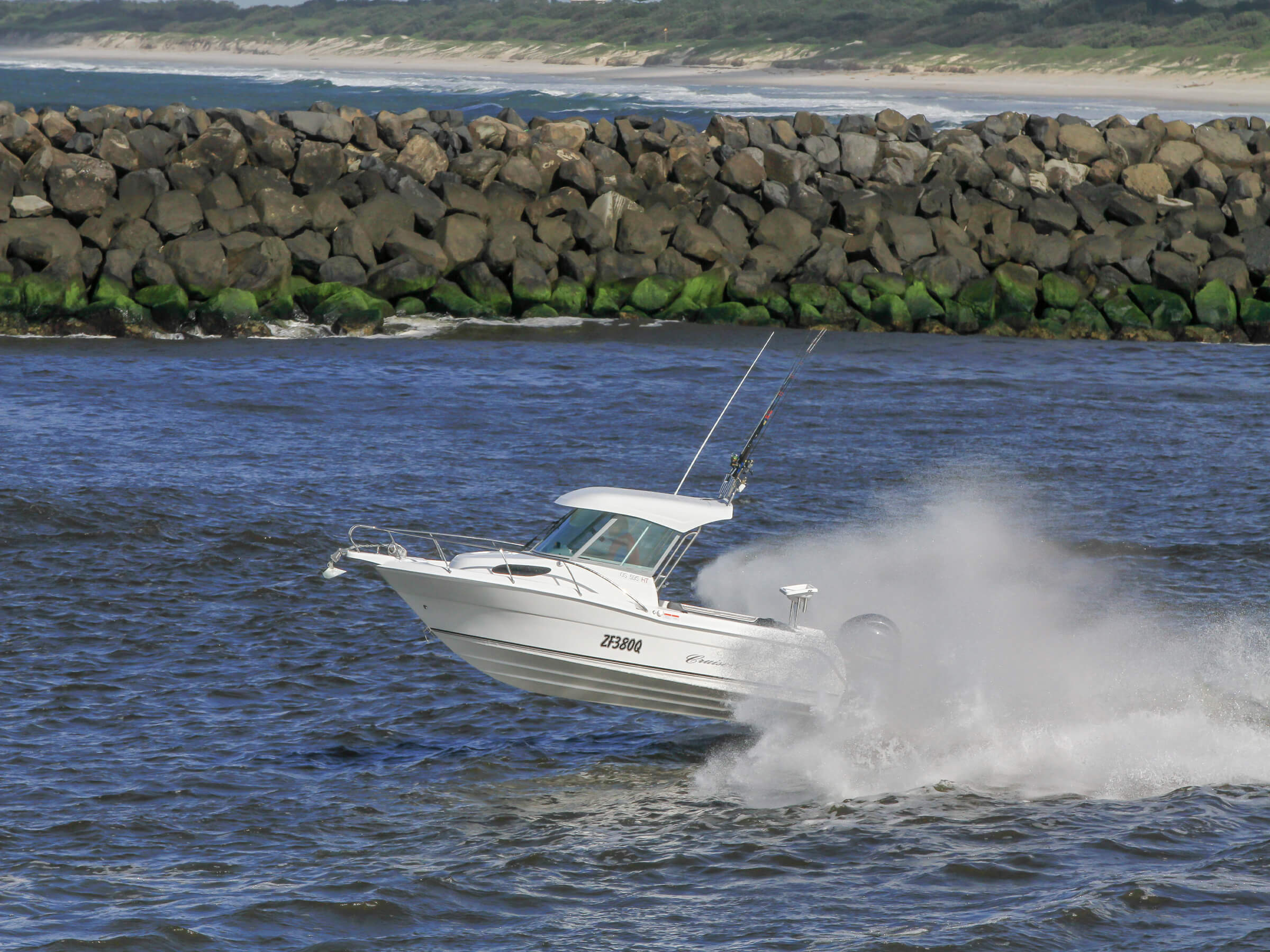 We spend a week with CruiseCraft’s stylish 595 Outsider Hard Top.

If you’ve been building trailerboats for more than 70 years, it’s likely that you’ve picked up a thing or two along the way, Brisbane’s CruiseCraft and the Nichols family being a prime example.

So when it came to choosing a boat to accompany us on a trip to the Northern Rivers area of NSW, we put in a call and were pleased to discover that a shiny new CruiseCraft Outsider 595 HT just happened to be available.

CruiseCraft is known for building solid, quality fibreglass boats that can handle anything from inland waterways to wild seas out on the shelf. And the fact that the 595 Outsider came with a hardtop was a bonus, offering excellent protection from the elements.

Another bonus was that big grey Yamaha 200 four-stroke on the transom. We were certainly not going to lack for power if we needed to get back in a hurry.

Before we left the CruiseCraft factory in the eastern Brisbane suburb of Hemmant, company boss Nathan Nichols took me on a tour of the facility, showcasing some of the production processes – the most recent of which is that CruiseCraft is now certified to apply SeaDek antislip and soft underfoot deck coverings in-house for all its models. The adhesive strips are cut out on two high-tech CNC routers, with our particular test boat a rolling showcase for the US-manufactured floor covering, which was applied to the entire cockpit floor and included a handy fish scale. The walkaround channel was also SeaDek-lined.

Underfoot, it felt great and was easy to clean during our time with the boat.

Nathan also explained that all CruiseCrafts are now timber-free and use Thermo-Lite composite material in all under-deck stringers and bearers for added strength and light weight.

Launched in late 2011, the Outsider model line-up incorporates the latest version of the company’s signature hull design, utilising a 20-degree deadrise and extra rise in the chines for a finer entry at the bow. The sheer-line on the Outsider also incorporates a step up about midway along the hull, resulting in more height at the front, which allows for a little more flare forward.

Nathan says the idea of the hull tweaks was to soften the ride, without sacrificing stability.

“Designing a boat is always going to be a compromise between ride and stability,” he explained. “Customer feedback told us we needed to soften the ride into a sea and, with this new hull, we reckon we’ve got the balance just about right.”

Other changes include refined overall geometry in terms of weight distribution, including moving the 190lt fuel tank further forward and placing the killtank as far rearward as possible.

Certainly, during our time with the 595 HT the ride was sure-footed, if still a little firm at times into a sea, but as far as stability was concerned, it was one of the best 6m boats I’ve been in. The foam-filled hull’s stability was abundantly demonstrated when we positioned two ‘amply’ proportioned 120-130kg or so anglers in the cockpit corner with barely a discernible lean on the boat. Very, very impressive.

Intended as a dedicated fishing machine, with overnighting capabilities via a lockable cabin and plenty of weather protection provided by the hardtop and an extendable awning that pulls out from inside the roof, the Outsider incorporates everything you’d expect to find in a consummate offshore-capable vessel.

From an angler’s perspective, it’s a pleasure to fish from, with toe rails beneath the padded coamings, which incorporate generous stowage pockets and racks for gaffs and rods. Down the back, there’s a fold-out stern lounge which can be left at home if necessary, a decent-sized bait-prep station (which could have done with a couple of drinkholders), a plumbed livebait tank in the starboard corner and a small transom door opposite, with raised twin batteries in either corner for added offshore security.

A folding stainless ladder will be welcomed by divers and there’s a salt- and freshwater washdown. Speaking of which, freshwater was stored in a bladder lodged in the port-side pocket directly adjacent to the forward passenger’s seat. I’d have preferred a solid plumbed tank, perhaps installed within the seat frame, rather than a bladder that could be prone to puncture.

The underfloor killtank is not the biggest I’ve seen, but CruiseCraft can supply 110lt eskies that fit under the seat frames.

Rodholders in the baitboard and gunwales are abetted by a solid stainless overhead rocket launcher, which is a little high for anyone under 6ft to access.

Within the shelter of the hardtop, both the skipper and first mate enjoy the comfort of adjustable swivelling seats perched on stainless mounts, under which tackle boxes or eskies could be stored. The tall windscreen and sliding side windows provide excellent all-round visibility. A windscreen wiper clears excess water, although freshwater jets would be welcomed by anyone spending a lot of time in big seas.

Everything is easy from the helm, in particular controlling the big Yamaha via the company’s excellent digital throttle and shift system. Hydraulic steering made turning easy, with the 595 leaning predictably into turns, while we found we used the auto-retract Lenco trim tabs regularly to keep the Hard Top running flat.

Electronics consisted of Yamaha’s standard engine-monitoring gauge, with a Garmin GPSmap XSV 10in plotter/sounder combo with keypad, as opposed to touchscreen interface. I actually found the keypad quite user friendly, particularly in lumpy seas when touchscreen sensitivity can be a pain.

A Lewmar winch and deep anchor locker make dropping the pick a breeze.

The cabin was nicely finished, with a full-width parcel shelf, infill for overnighting, a space for a porta-loo and shallow stowage under the swabs.

Performance was what I’d expect from a near-two tonne boat carrying two large adults – plus one lean and trim journalist! The 595 rose to plane easily at around 2800rpm and, at a cruising pace of around 3500, it was running at 36km/h and using 21.6lt/h, which worked out to a pretty decent day out from the 190lt tank. The 595 comes standard with a 150hp Yamaha, with 175 and 200hp options.

As far as gripes go, if it were my boat I’d probably look at adding some longitudinal grabrails to the hardtop for heavy going, plus a padded armrest on the outside of the skipper’s chair would be appreciated.

Things I really liked about the 595 Outsider HT included the SeaDek flooring, protection from the elements and visibility afforded by the hardtop, tons of grunt provided by the 200 Yam, excellent stability at rest and the L&R boat catcher retrieval system. I also liked the look and lines of the boat – and I wasn’t alone. We had plenty of favourable comments at boat ramps, with the 595 attracting lots of attention.

Plus, there’s the overall attention to detail and quality of finish – all surfaces and mouldings are nicely finished – and you can’t help but be left with the distinct impression that a lot of pride goes into each boat and that there are no shortcuts between initial layup and final fitout in the CruiseCraft production journey.