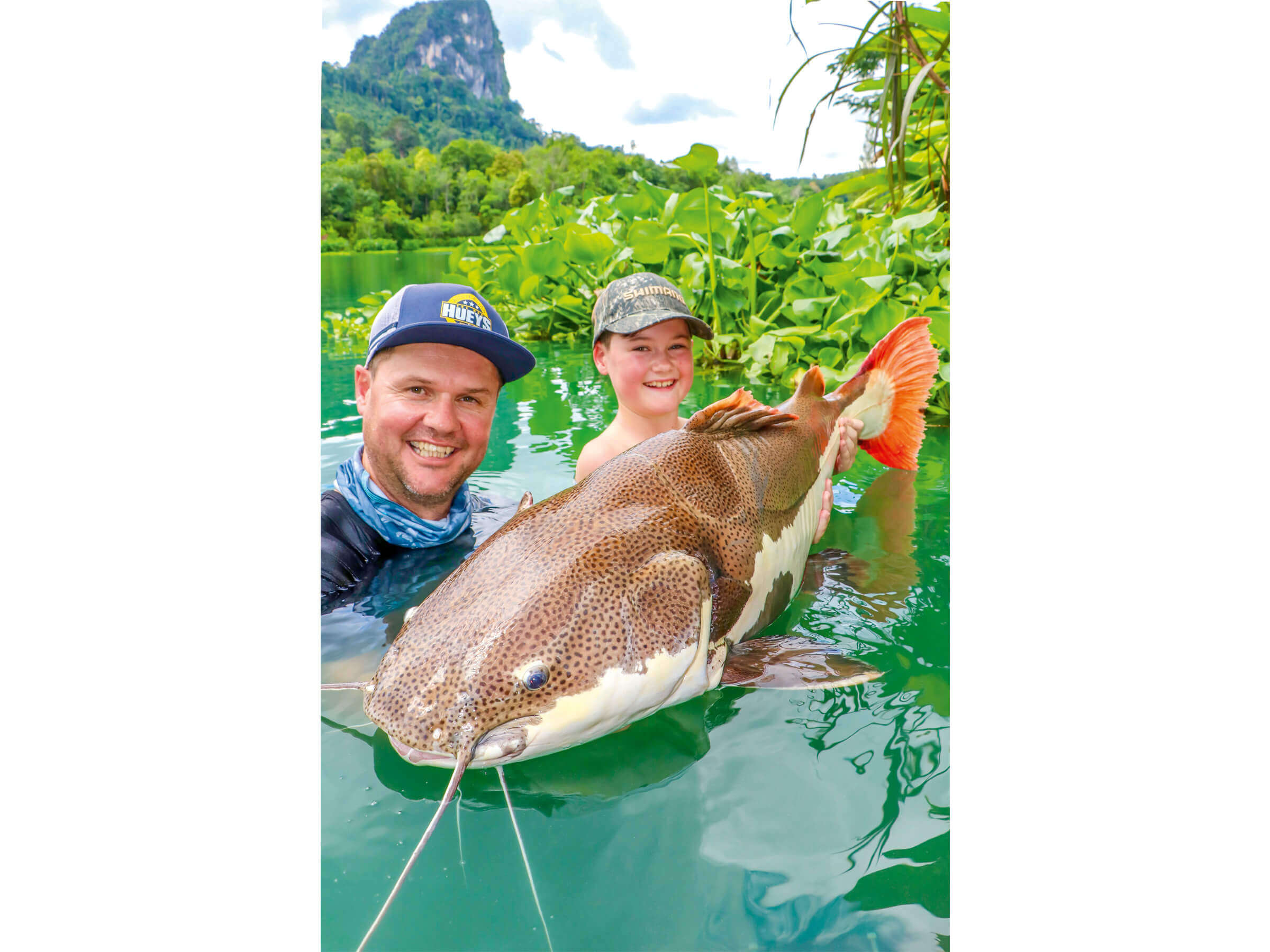 Paul and Jet Worsteling with an Amazon redtail catfish.
Paul Worsteling and family take on some of the world’s most sought-after freshwater fish in a special angler’s resort in Thailand.

Anyone who is passionately involved in any hobby or interest, whether it be cycling, bush walking, sailing or fishing, will always be chasing their next Everest. Looking towards that next peak is what drives many people to attain their own personal goals. As a fisherman, mine has changed many, many times since I first picked up a rod and reel at the tender age of five.

First it was for someone to actually take me fishing, then to catch a fish. What about a snapper? My first shark and so on …

As I grew older and more established in terms of my fishing career, my personal Everest kept getting higher. The peaks conquered were many and varied. A billfish on fly, a 600-pound tuna, a 1000-pound marlin, a 50-pound barramundi, a Papuan black bass, a 20-pound snapper on a ring spanner, catching a fish bigger than the boat, a sailfish on a kid’s combo, salmon on fly in Alaska, rooster fish in Cabo, an 800-pound swordfish, 150-pound tarpon. Actually, I’m feeling exhausted just typing it!

I’ve obviously been very fortunate to turn my hobby and passion into a living, but I’d been pondering for a while what my newest next big thing might be, when my 10-year-old son, Jet, came up with the answer. He’s a fishing machine and researches fish from around the world every spare minute he has. He came up with several species of freshwater fish that I’d never even heard of – fish that grow to over 500 pounds and look like creatures that roamed the planet in the age of the dinosaurs. We began scanning the internet in search of likely locations and soon found the perfect place to attempt our next summit assault.

Gillhams Fishing Resort in Krabi, Southern Thailand, boasts a 12-acre lake with 52 freshwater species from around the world. Six of these exceed the magical 100-pound mark, with arapaima to just under 600 pounds, chao phraya catfish to over 150 pounds, Mekong giant catfish to over 300 pounds, Siamese carp to over 200 pounds and wallago leeri catfish to 150 pounds, with Amazon redtail catfish pushing close to the mark.

As an angler, it’s so exciting travelling to new places and meeting new faces, all with the chance of catching fish that you’ve never seen and potentially never even heard of before. As a family, we set a few goals for this trip. We specifically wanted to catch our ‘big five’ in a team effort and we wanted to maintain a diet of authentic Thai food. I’m happy to report we achieved all of the above during our three-night stay.

If you’d told me that the highlight of an overseas fishing trip would be catching a carp, I would have laughed it off, but these things are out of control. Siamese carp are virtually giant goldfish that can reach extraordinary weights and peel 80-pound braid under maximum drag off a reel with ease. This was by far my favourite fish of the trip. Jet’s biggest was 70 pounds, mine 85 and Cristy, my wife, smashed us all with a 100-pound bruiser. They are native to Thailand, Cambodia and Vietnam and are the biggest species of carp on the planet, with one specimen caught in a fisherman’s net reportedly weighing in at 661 pounds.

In Australia, catching a catfish is considered no big deal, but these guys are no ordinary catfish. The Amazon redtail catfish is the only living representative of its genus, with the family tree dating back over 13 million years. They can grow to almost 200 pounds and possess two armoured plates that pivot together on the head and back to protect them from predators. They can be found in South America in the Amazon, Orinoco and Essequibo river systems and are an extremely popular aquarium fish world-wide. They are predatory flesh-eaters and their caudal fin produces great power over short distances. Holding one and feeling that armour plate was an unforgettable experience. We caught a stack of them ranging from 20 to 60 pounds. Stopping anything bigger would take a lot of skill and even more luck.

Mekong giant catfish are considered a sacred fish culturally and can grow to a staggering 200kg in just six years. Giant by name, giant by nature, these things are true beasts native to the Mekong basin in Southeast Asia and China. The biggest fish ever recorded was caught in 1981 – it weighed in at 646 pounds and was an amazing 2.7m long. We were at Gillhams outside the peak period for this species, but Jet was lucky enough to snag a pup one afternoon to add to our ‘big five’ list.

I have to admit I had never even heard of these things until the later planning stages of the trip. It was Jet’s number-one goal to land a ripsaw catfish, but the chances were slim. Even at Gillhams, these fish are shy and rarely caught. They are native to South America and only grow to a metre and about 30 pounds. The name comes from lateral teeth-like projections jutting out from both sides of their body from just behind the leading edge of the dorsal fin all the way down to, and including, the caudal peduncle (tail wrist). Jet’s wish came true late on day two while he was on strike as the baitrunner screamed. After a 15-minute battle, up popped a ripsaw that was about as big as they grow. Of all the fish we caught, this was the one that made our jaws drop. It seemed so prehistoric and we considered ourselves lucky to have seen and held one.

The arapaima alone would be reason enough to fly halfway around the world. One of the biggest freshwater fish on the planet, it grows to as long as three metres. It basically looks like a saratoga on growth hormones. The arapaima is native to South America, but has been successfully introduced to many other areas. Even though they have gills, they also depend on surface air breathing, so are easily spotted by a keen eye. Another interesting fact is that the arapaima is a mouth-brooder, keeping the young and protecting them in their mouths while they are small and vulnerable. They are also predators that love fishy flesh, with best baits including herring, salami and spam!

We fished long and hard for one of these exotic beasts and it was after almost eight hours of waiting when Jet and I wandered off to get a drink that the bite alarm sounded and Cristy was on. When it came up for its first gulp of air and we saw what it was, the excitement was hard to control. Cristy made no mistake and we got some great family pics before the fish literally decided enough was enough and jumped out of the net to freedom.

Our accommodation was situated a mere 15m from the edge of the lake. So close, in fact, that I could hear the bite alarm one morning while I was making a cup of tea. We fished five rods over two locations and all of the gear was top quality, with beautiful Shimano baitrunner reels spooled with 80-pound braid on custom rods. Several fishing guides patrol the edge of the lake, moving from station to station (known as a swim) to help with any needs a client may have. They even provide whistles to blow when clients hook up, so they can come running to assist in landing the fish.

The fishes’ wellbeing is paramount. Special fish-friendly landing nets are used and all pics are taken in the water to keep the fish in the best condition possible. Fish are swum between pics and sprayed with antiseptic on any wounds, ulcers and on the hook site prior to release. Different rules are applied to different species, which I also found fascinating. Once carp are over 80 pounds, they became a two-lift fish, meaning two people are required to support them properly when they’re caught. Arapaima are not to be lifted from the water, but gently laid on their side and rolled towards it, and so on.

Every morning at 8am someone would come and take the breakfast order so you didn’t have to leave your rods for a second. The same at lunch time and intermittently throughout the day. I fell in love with a dish called moo pad ka pah. The chilli made my eyes water, but I just couldn’t get enough.

If fishing isn’t your thing, or you just want a break, you can take advantage of the day spa, cookery school, walk the edge of the lake in search of wildlife, or just take the plunge in one of two stunning pools and take in the breathtaking views.

I fish 35-40 weeks a year around Australia and across the world for my IFISH with Tackleworld television series on Ten and One, but when we are looking for a holiday as a family, we nearly always go fishing. Why? Because we love it. I paid for all three of us to go on this trip and would pay the money again in the future. No cash or freebies for comments here – just a family who went on a great fishing adventure and came home with incredible stories to tell.

If you like what you’ve read, then I highly recommend you give Gillhams a go. It really is fishing’s Jurassic Park.