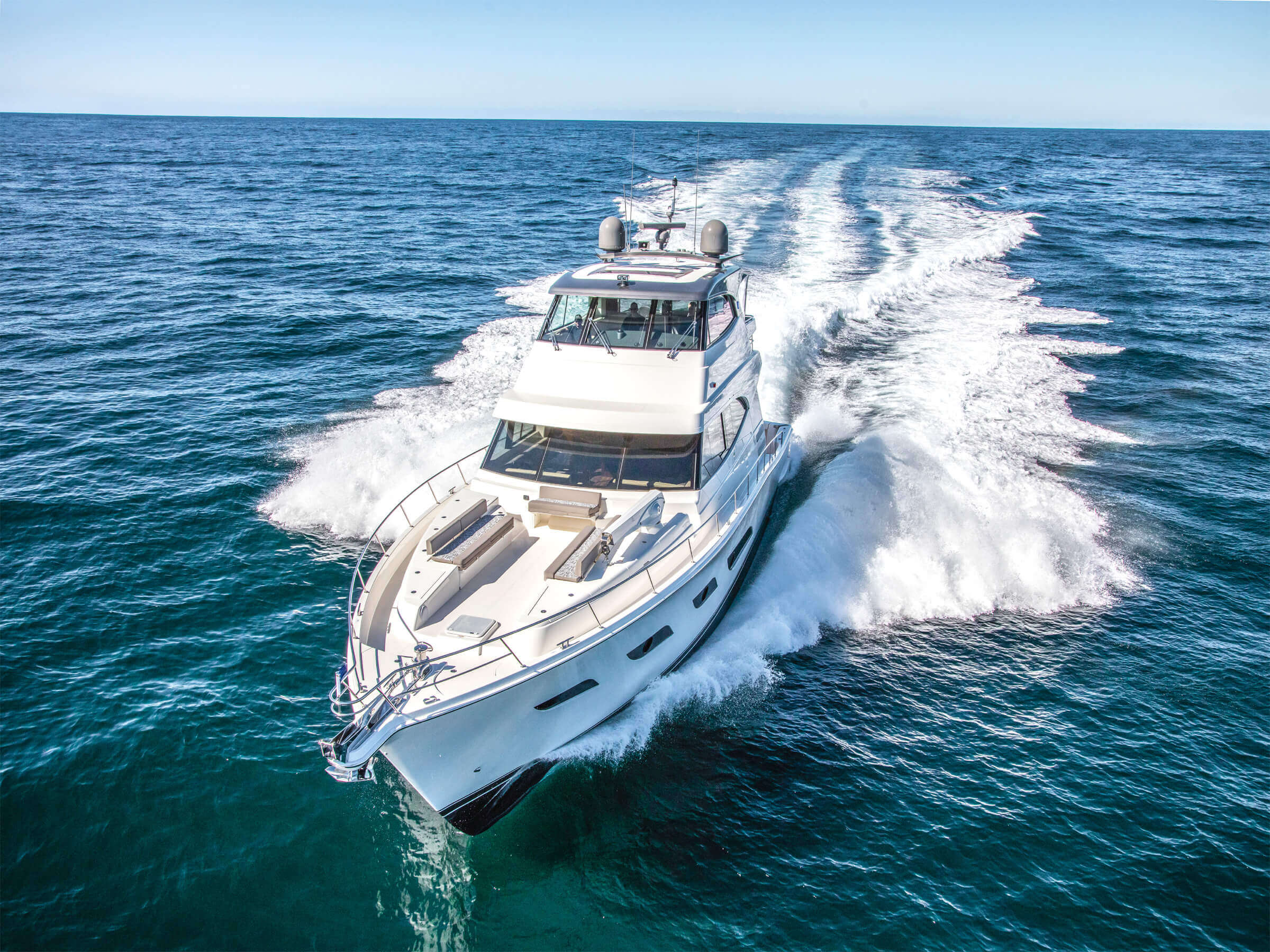 Riviera’s new object of desire is blessed with a stunning design that melds form and function with luxurious and versatile onboard liveability.

It seems these days, everyone is obsessed with looking and feeling younger – and now there’s an easy way to achieve this without resorting to Botox, liposuction, tummy tucks, yoga retreats and coagulated cauliflower pizza bases.

Yes, it will set you back $3,898,400 for the base model, but spend any amount of time aboard and your factory settings for youthfulness are instantly restored, with pent-up stress melting into the wake. I defy anyone not to see palm trees in their near future from the 68’s helm.

So fresh and refreshing is the design that it transports you back to that moment you first stepped aboard a boat, felt the sluice of foam beneath the chines, and fell in love. It’s as though some male and female moulds came together, over a glass of resin and Barry White music, to produce a lovechild melding the refined luxury of a European motoryacht with the edgy athleticism of a US-style sportsfishing convertible.

In conceiving the blueprints, Riviera engaged with seasoned owners from around the world, building not only a picture of their perfect cruiser, but a full-scale mock-up in the factory. Hull 1 was about as perfect as it could be, allowing production to proceed apace.

Boat #2 followed close behind, bound for the Cannes Boat Show and then on to its Spanish owners, and the next two are well advanced. At the time of writing, 12 orders had been secured.

Interestingly, a plethora of motoryacht attributes were borne out by the consultation process, like a pantograph side door, walkaround decks with moulded bulwarks, and a foredeck that transforms into an entertaining space. Ladies, particularly, wanted elements such as mezzanine dining, a central galley and, of course, a full-beam master stateroom.

Men, being blokes, opted for the ability to run at 30-plus knots plus a cockpit geared to fish the canyons. At the same time, the 68 can traverse the Tasman and venture onwards to the Pacific Isles with complete safety and comfort. Twin wing tanks of 3500lt a side, plus an optional long-range tank of 1500lt, afford a cruising range of 1975nm at 9 knots (16.7km/h).

A conventional enclosed flybridge can do this too, of course, but against any measure the SMY layout simply offers onboard living on a superior scale.

As it happens, the 68 was conceived in tandem with a 72. The mould is blocked, sacrificing a few square metres of cockpit and mezzanine space, however the two models are identical from the engine room bulkhead forward. Price difference is around $600,000, some of which can be attributed to larger standard motors.

It’s immediately apparent how high and dry the 68’s hull sits above the water. Bridge clearance is 6.4m – 2.5 storeys – so headroom throughout is exceptional, even in the full-height engine room. The beam of 6m is carried well aft and the motors are set further back than usual, thanks to a V-drive installation.

To port are dual stairwells, one leading down from the cockpit mezzanine past CZone fusing and a washer/dryer unit, the other rising from the saloon to the enclosed bridge.

Heading below, firstly, there’s a day head with shower. The adjacent crew cabin has a single berth, beneath which are a stainless-steel workbench and the ship’s toolkit. Owner drivers may opt to use this space for gamefishing, watersports or dive gear.

From here, through a full-sized and sealed door, you enter the heart of the beast – alternatively, engineers can use a hatch concealed in the cockpit wetbar. With so much height and width available, there’s more than ample servicing accessibility.

Twin generators were installed on the test boat for redundancy, producing 27.5 and 13kVA respectively, and there’s a battery of aircon units. Speaking of which, lithium batteries are installed as standard.

The 68 was designed and built to CE Category B, a highly exacting construction code. As an example, a separate emergency battery is placed in the flybridge for the communications equipment. In terms of engineering execution and sensible seamanship, this is up there with the world’s best.

The MAN V12-1550 diesels are a sight to behold in their gleaming all-white surrounds, connecting seamlessly to V-drives via Seatorque’s oil-filled, self-contained shaft assembly. Exhausts lead to a wedged section at the transom, expelling their fumes and noise underwater. The temperature-sensitive variable-speed engine room fans are equally quiet.

Back on deck, the mezzanine offers covered seating and eating for 10. Twin drop-leaf tables create one long bench, fed by the nearby cockpit barbecue and aft-placed galley. There’s a bar table and stools facing the hopper window, allowing the hosts to converse and commune with both the outdoor and saloon lounge areas.

From a catering perspective, the portside pantograph door gives quick access to guests at the bow. Here, the ingeniously configured foredeck creates both a haven for a 4m tender and a socialising hub. Lift the dinghy away, via a davit, and the space transforms to a lounge nook with more cushions, folding parts and stowage than you’ll know what to do with.

Headroom in the VIP stateroom below is not compromised in any way. It has a walkaround queen-size bed, en suite and hanging locker, while topside windows and an overhead hatch draw in abundant light.

Classic and Grand Presidential options are offered for the master suite. The Classic, as demonstrated, has a master stateroom amidships with en suite to starboard – there’s a king-size bed, stylish headboard and bedside tables. You also get an additional fourth guest cabin with Pullman-style bunks to starboard.

The Presidential suite places the en suite in the starboard fore quarter with a sitting area with breakfast table, while the port guest cabin has twin single beds that can form a double as the inboard bed slides across at the touch of a button.

Finish is equal to the best anywhere. While it’s hard not to love the glossy walnut finish and muted cream overtones on the test vessel, cherrywood and wenge are optional timbers, as is a satin varnish. For the inset mood lighting, there’s a rainbow of colour options, though warm white would do just fine.

The flybridge is almost literally in the clouds, providing a commanding view from the twin helmseats. It has a leather sofa to starboard with a pull-out mattress that creates another huge double berth, bringing sleeping capacity to 10. You get a further flatscreen TV up here, facing the lounge.

Skippers have three 22in Garmin screens spread before them on the dash, along with a centreline helm position. Complementing this is an external docking station to port on the flybridge overhang and an additional EJS (Express Joystick System) control to starboard.

Upon starting the MANs, you begin to fully appreciate how elegantly sophisticated the drive system is. At idle, it’s totally free of vibration and scarcely audible from the bridge, while running speeds produce just 60dB – akin to normal conversation levels.

For all the power at the disposal of its twin Veem five-axis props, the 68 is remarkably delicate in close-quarters manoeuvring. With the joystick linking to hydraulic thrusters, skippers can progressively control 46 tonnes of boat with the tiniest tweak and twist of their fingers.

Thenceforth the real symphony begins, with the Twin Disc transmissions working beautifully in concert with the twin-turbo V12s to deliver super-smooth acceleration. V-drives bring added complexity in some buyer’s minds, but this is state-of-the-art technology that’s been thoroughly proven on superyachts.

The shaft angle is eight degrees, with the props residing in hull tunnels. It allows the hull to have an optimum running angle of just 4.2 degrees, which can be monitored through the trim tab display.

To sculpt the running surfaces, Riviera renewed its acquaintance with Dutchman Frank Mulder. Tank testing was undertaken in England, resulting in a hull that is sumptuously soft, efficient and dry underway. Spray peels away from the fine entry and there’s no appreciable bow lift during the transition to plane, which kicks in at around 1600rpm and 17 knots (31.5km/h).

The electronic steering is sporty and precise, needing just a couple of turns from lock-to-lock. The hull responds like a thoroughbred under rein and form stability is excellent, regardless of the speed. The owner, Andrew, felt comfortable in dispensing with the option of a gyro that had initially been specced.

Andrew, incidentally, has upgraded from a three-year-old Riviera 63, which he and his wife, Jenny, found a little compact for their tribe of six kids and nine grandkids. They say the 68 feels twice as big as the 63.

Ask Jenny what she likes most about the new boat and she replies with a smile “Everything … but especially the captain.”

They are not alone in finding the 68 faultless. During its launch at the 2017 Sydney International Boat Show, admirers stepped off saying it’s unquestionably the best Riviera ever built, which is some feat after 5200 boats over 37 years.

Essentially, the 68 and 72 are the culmination of a highly seasoned in-house design team working exhaustively with arguably the best superyacht architect in the world and a discerning customer base.

Significantly, they’ve stolen buyers from the motoryacht ranks. It’s a conquest boat for Riviera in that category and, most likely, the start of another new collection residing between the Flybridge and Sport Yacht ranges.