How to load your boat with Alistair McGlashan 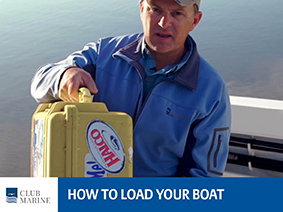 Don't take loading your boat for granted. In this video Al shares his tips for storing gear including rods, camera gear, safety gear, sounder covers, etc. These great tips will help keep your gear safe, dry and out of the way.
Al McGlashan: Now, when it comes to loading your boat, it's something that everyone, well, they pretty much take for granted, but everything in your boat has a place because it's loose items that cause troubles.

So, starting with your rods. Let's face it, they're expensive, there's a few dollars in there, and you've got the danger of hooks and stuff like that. So, don't just leave them on the back of the deck like that. They'll scratch, especially with graphite, you'll damage them. Instead, get the whole crew, everyone, to put your stuff in to places, whether it be upright rod holders, whether it be up in the top, up in your rocket launcher up here. Now your rods are safe and, most importantly, your deck is clear, hazard free.

So, even with hard cases, now, everyone's carrying cameras and stuff like that these days. These are all potential hazards. If you leave them lying on the deck and it's a rough day, they start swinging around, smashing into people, put them somewhere safe. In this case, we sit them up in the cabin there, securely in the corners.

Now, even a soft bag can be a potential hazard in a boat. You don't want to put it down here on the deck because it's wet. Put it up in the cabin, but put it somewhere securely. Even your sounder covers, don't just turf them in there, put them in neatly so they don't bounce around.

So, one final check that everything's secure in the cabin, then, just do it again on your deck. Make sure all your poles, your gaffs, your nets, everything's tied away and secured. Your knives, have them in either the sheathes or in knife holders or stowed away somewhere. So, even your life jackets, make sure they're stowed, but make sure they're accessible. That's an important point.

At the end of the day, a clear deck will help you catch more fish. Steph, let's go fishing.
Tags
Video
Runabout
Share
Subscribe
Watch next
Back to videos