Launching and retrieving off a bank with Alistair McGlashan 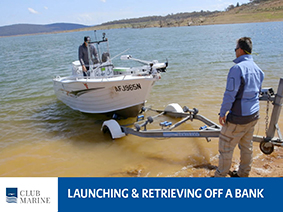 In this video Alistair McGlashan gives his best advice for launching and retrieving from impoundments, lakes and river. Be sure to keep an eye out for low water levels, soft sand and submerged objects.
Al McGlashan: Now, when it comes to fishing freshwater impoundments and lakes and rivers, getting your boat out can be a real trick. Particularly in places like this which is Lake Eucumbene. There's a few problems you have to deal with, because the boat ramp here, the water level's low, so the boat ramp, the concrete finish is 50 meters from the water. So, you're going to have launch off the bank. But to do it right, there's a couple of little tricks we can do.

So the first thing we do is we assess the bank. Now, we want a hard bank. We want rock, gravel, something that's going to get a bit of grip, and we want to avoid any soft sand, with dirt. You're going to bog down a bit.

Secondly, we want the gradient. The steeper it is, the harder it's going to be to pull that extra weight out. So, you want a balance between the best angle and still a hard bottom, that's going to give the car enough grip to get out.

You're good to go. Now, launching your boat, that's really easy because now pulling it out, there's no weight on the trailer. It's retrieving it, that's the hard part because you've got all that extra weight. You've got to get it up the hill. That's the one we need to put the forethought into.

Of course, we're going to put it in four-wheel drive. You're not going to pull them out in two-wheel drive on this stuff. One trick that can work is that you can use the engine as well. Obviously, play it safe, but if you're a bit stuck, use the engine to give you a little bit of push to get that momentum to get the car out.

That's how easy it is to launch or retrieve, if you just take a little bit of time to do it in the right spot.
Tags
Video
Runabout
Jetski
Share
Subscribe
Watch next
Back to videos