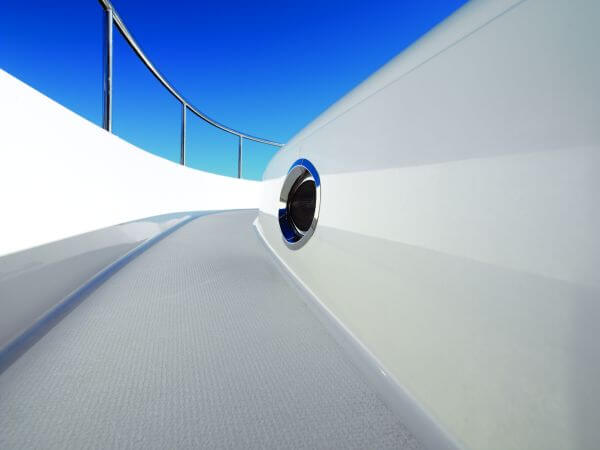 A wise old newspaper editor once gave me some advice that I’ve since tried to apply to every boat critique. “Save your superlatives, son,” he said, cigarette dangling precariously from his mouth, “for you never know when you’re really gonna need ‘em.”

Dozens of craft have come and gone since, many worthy of acclaim, some just the faintest praise. A couple have been downright contemptible. But good, bad or ugly, I’ve consciously kept a few 24-carat commendations tucked away in the memory banks.

Well, the time has come to drain the superlative account and take out a mortgage, for I’ve just hopped off Maritimo’s new 52. Clever. Brilliant. Wonderful. The most stylish Australian production cruiser I’ve seen.

Folk say that Maritimo’s founder, Bill Barry-Cotter is a boat building genius (an oft-abused superlative itself), but this 52-footer supports that theory. Certainly, the man has an extraordinary knack for interpreting market demands and delivering the goods. He surrounds himself with skilled staff and he obviously listens to his customers.

In the 52’s case, Barry-Cotter and Co have heard not only what husbands desire, but also wives. The feminine touch is evident everywhere, from the placement of the galley to the fit-out of the bathrooms. It is truly a home away from home.

My own trouble-and-strife, God love her, arms herself with Pine-o-Cleen and Glen 20 before setting foot on my own dilapidated 25-footer, yet she’s no stranger to luxury boats. And words almost failed her (!) when she boarded the 52.

“I can’t imagine how it could possibly be more perfect,” she gushed. “It’s unbelievable.”

Our two children, aged 7 and 4, were also awed into relative silence – another first. With bulwark-protected, 400mm-wide sidedecks, high bowrail and well-positioned handrails, plus a large, deep cockpit, there was no concern about losing them. No risk of them breaking their necks either, thanks to the internal stairwell leading to the enclosed flybridge.

Yep, walk-around access, spacious cockpit, internal stairs, hardtop… it’s a lot to fit into a 52-footer, but the smaller sibling of the 2005 Australian Boat of the Year somehow manages it with aplomb.

The first thing that strikes you, aesthetically, is the beam. That’s partly because there’s a step in the topsides, some 300mm above the waterline, which affords extra volume without compromising the hull’s footprint on the water. Viewed from the stern or side-on, it’s an exceptionally handsome craft, classically rendered with sweeping sheer in the gunwale line. The foredeck runs at the same height as the bulwark, enhancing the overall impression of sleekness.

To my eye, the front windows of the flybridge seem slightly out of proportion. Sure, they give an excellent view forward for the skipper and passengers, but they punctuate the otherwise nicely balanced lines.

A large boarding platform beckons you aboard, with walk-thru access either side of an oval-shaped transom module that houses a barbecue and sink. Open the module’s lid fully and it serves as a bait-cutting board. The exhausts exit just below the boarding platform.

Ancillary items are swallowed by a lazarette in the cockpit floor, with fender storage cleverly incorporated into the lid. Gas struts make it easy to open. Stainless steel bollards are mounted directly atop the coaming, tying in with a handrail.

The cabin bulk head, including the sliding door, is almost entirely glass to bathe the cabin in light and link the cockpit with the interior. Once inside you find the galley located immediately to starboard, a concept established by the Maritimo 60, which recognises the value owners place on the kitchen.

You can socialise while preparing meals, and serve refreshments to guests in the cockpit or upstairs. Being C-shaped, the layout allows the chef to wedge him- or herself in when moving, plus it affords maximum preparation area. A varnished timber countertop rings the area.

Features of the galley include Corian benchtops with twin sinks, a three-quarter-height upright fridge and, above it, a flush-fitted Panasonic Genius convection microwave oven. Fisher and Paykel gets a look in with the 4-burner benchtop stove, concealed dishwasher drawer, and an exhaust fan. The latter is a luxury, for there’s ample headroom to allow steam to dissipate, but it also sheds light on the cooktop. It’s all about making the cook feel at home.

The significance of the internal stairs can’t be over-stated. A number of older buyers have traded their sports convertibles and bought a Maritimo on this strength alone. Flybridges are perilous, if not impossible to access if you’re overweight, incapacitated or advancing in years, but here the climb is a moderate 45 degrees, with seven wide steps. It’s an integral feature, not an after-thought, and it has the added security of a stout stainless steel handrail.

The under-stair space is filled with an entertainment cabinet, comprising a slide-out glassware drawer, icemaker, wine rack and wide-screen TV. The electrics panel resides nearby, centralising the switches with engine gauges (psi, temp, battery condition, hours) and the high-amp fuses.

The L-shaped settee is port-side at the front of the saloon, where it enjoys circumambient views. The test boat’s high-back lounge was upholstered in olive-coloured microsuede (leather is optional) and had a coffee table within easy reach.

The expanse beneath the front window offers a mass of storage for charts, operating manuals etc. Being varnished timber – teak in this case, but lighter myrtle if you prefer – it might suffer from sun exposure over time.

Diagonally opposite is the dinette, also L-shaped and capable of seating five adults. There was no lower helm station on the test boat, although provision is made for one. A boon for docking or anchoring is the sliding door leading to the starboard walkway, which saves climbing out of the cockpit.

The saloon was lacking in the downlight department, though in fairness the test boat had been rushed to make the Sydney boat show, and more were set to be added.

Down below, immediately to starboard, is the guest room with twin bunks. Both berths are confined in headroom due to the sidedeck, but they would be ideal for a child or early teen. The cabin comes with a hanging locker, while a laundry occupies the remaining space.

The main stateroom, to port, would do the Hilton proud. Pride of place goes to the queen-size island berth, flanked by bedside tables and backed by an upholstered bedhead. Tasteful Asian-inspired artwork complemented the stateroom’s wealth of wood and subtle beige headliner. Natural light pervades the cabin from an opening side window, while chilled air enters through three vents.

The bed base raises on gas struts to reveal a cavernous storage locker, so deep you need a stair to get down to it. All the life jackets were stored there, along with a Pains Wessex flare pack. Drawers are incorporated as well.

The main bathroom has the same appointments and similar dimensions, with a door creating ensuite access for the for’ard stateroom. This cabin boasts an island double bed and good-sized hanging and personal lockers.

Almost like a top storey, the enclosed flybridge greatly extends the living area. It has a lounge to port, and another L-shaped dinette facing aft, where you picture yourself feasting on bacon and eggs on a crisp Sunday morning. There’s a sink and bar fridge, too.

Air-conditioning for the bridge is a $15,000 option – money well spent on a vessel of this magnitude. If it’s fresh air you seek, the front window panel hinges open. A sliding door leads to the balcony-like aft deck, where bean bags were tossed and people could stand while enjoying a drink.

The helm station has a three-seater fixed lounge. Shorter drivers may need a cushion behind their back or, for them, the option of a single helm chair would be preferable. Considerable light hits the dash, but the plotter and sounder screens could be clearly read despite the glare.

Windage is inherent in the design, so to aid in manoevrability I’d recommend supplementing the standard bow thruster with the optional stern thruster. The low-idle function on the Caterpillar diesels assists by reducing revs to 550rpm. Standard power is supplied by twin 575hp Cats – the demonstrator sported C12 700s, a $52,000 option, which made light work of their task.

The 52 accelerates rapidly out of the hole and rides relatively flat, leaving a clean wake. Wide chines toss whitewater well away. Handling characteristics are unusual in that, when turning, the initial and temporary tendency is to lean slightly outwards. The chines quickly bite and the hull automatically levels, somewhat in the manner of a multihull.

Having weight aloft naturally effects the centre of gravity, but such is the beam (5.2 metres) that instability is never an issue. I was urged by the Maritimo dealer to power through a turn at full speed and did so with complete confidence. Cushions tend to slide slightly, but the forces don’t confer noticeably to passengers.

The 22-tonne, variable-deadrise hull carves through chop almost like it’s on the freeway and, typically for a Barry-Cotter boat, there is no disconcerting rattling down below. Cocooned in the enclosed bridge, with no clears flapping or spray breaching the hull’s defences, it’s so quiet that there is little sensation of speed. Only the pleasurable burble of the throbbing Cats betrays your speed. That, and the all-knowing GPS.

It would be remiss not to mention the engine room, which has almost standing headroom and offers superb access to various components. The boat doesn’t skimp on tankage either, carrying 3850 litres of fuel and 800 litres of water.

From its heart to its soul this is a special craft, and with a base price tag of $1.35million the 52 also represents relatively good value. Good taste needn’t be expensive, for a beautiful boat uses as much fibreglass as an average one.

Accompanying us during our test was a couple who own a year-old 47-foot sportscruiser and were considering upgrading.

Think about it he did, and placed his order. It wouldn’t surprise me if he’s bought the 2006 Cruiser of the Year.